Warren Buffett has overseen some truly jaw-dropping investment gains since becoming CEO of Berkshire Hathaway (BRK.A) (BRK.B) more than 57 years ago. Berkshire’s Class A shares (BRK.A) have gained more than 3,600,000% since the beginning of 1965 (through Dec. 31, 2021). This is a 120 times greater total return than the broad-based S&P 500, including dividends paid, over the same time frame.

While Buffett’s well-documented willingness to hold his investments for many years, if not decades, is a big reason for his success, an oft-overlooked factor that’s been responsible for the Oracle of Omaha’s outperformance is portfolio concentration. In Buffett’s view, diversification is only necessary if you don’t know what you’re doing.

This belief is certainly reflected in Berkshire Hathaway’s investment portfolio. Despite having stakes in around four dozen securities, just 12 stocks account for 89% of the company’s $347.2 billion in invested assets as of Nov. 15, 2022. Take note that the following percentages also include shares owned by Warren Buffett’s “secret” portfolio, New England Asset Management.

1. Apple: 39.6% of invested assets
For years, tech stock Apple (AAPL) has far and away been the top holding for Buffett’s company. Apple has an incredibly loyal customer base and has primarily used innovation, not pricing power, to grow its sales and profits. With CEO Tim Cook spearheading a multiyear transition that’ll see his company focus on high-margin subscription services and Apple repurchasing a whopping $554 billion worth of its common stock over the past decade, all the appropriate boxes have been checked for the Oracle of Omaha.

2. Bank of America: 11.2%
I’d argue there isn’t an industry Buffett prefers to invest in more than bank stocks. Money-center giant Bank of America (BAC) sits atop the pack. Buffett’s fascination with Bank of America likely has to do with its interest-rate sensitivity. As the Federal Reserve aggressively raises interest rates to combat historically high inflation, BofA’s outstanding variable-rate loans should bring in billions of dollars in added interest income each year. Like Apple, it also has a shareholder-friendly capital-return program. 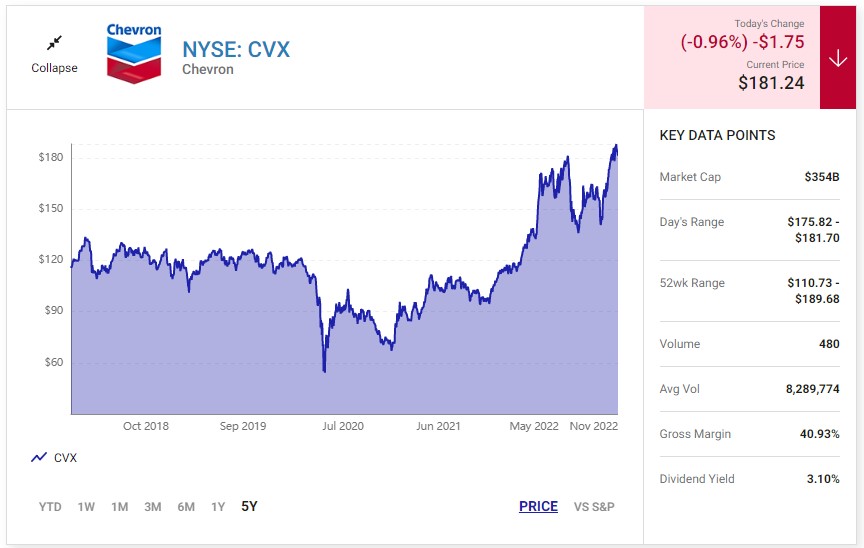 3. Chevron 9.2%
Warren Buffett and his secret portfolio have piled into oil stock Chevron (CVX) since 2022 began. Persistent issues with the global energy supply chain tied to the COVID-19 pandemic and Russia’s invasion of Ukraine should provide a sustained lift to energy commodity prices. What’s more, Chevron is an integrated energy company, which means it’s well positioned, with its pipelines, chemical plants, and refineries, to take advantage of any weakness in crude oil or natural gas prices.

4. Coca-Cola: 7%
Beverage stock Coca-Cola (KO) is Berkshire Hathaway’s longest continuously held stock (34 years). Though it’s not the growth story it once was, Coca-Cola continues to benefit from superior marketing and customer engagement, as well as geographic diversity. With the exception of Cuba, North Korea, and Russia, Coke is operating in every other country right now. This enables it to generate predictable cash flow in developed countries while also boosting its organic growth potential in faster-growing emerging markets.

5. American Express: 6.7%
Credit-services provider American Express (AXP) is Buffett’s second-longest-held stock (29 years). AmEx is a company that benefits immensely from sustained periods of expansion. It’s able to generate revenue from merchant fees and collect interest income and fees from its cardholders. It’s also been quite successful in courting affluent clientele. People with higher incomes are less likely to alter their spending habits or fail to pay their bills during minor economic downturns.

7. Kraft Heinz: 3.5%
Packaged foods company Kraft Heinz (KHC) may be the Oracle of Omaha’s most disappointing current investment. Although Kraft enjoyed a modest organic growth resurgence during the pandemic as people chose to eat at home more often, the company’s balance sheet remains weighed down by a lot of goodwill (i.e., overpaying for previous acquisitions) and a sizable debt position. This makes reinvesting in its businesses difficult.

8. Moody’s: 2.1%
Credit-ratings agency Moody’s (MCO) is another longtime holding (21 years) of Berkshire Hathaway. An extended period of low lending rates since 2008 kept Moody’s credit division busy assessing the quality of newly issued/outstanding debt. But with lending rates climbing, it’s Moody’s Analytics that’ll be picking up the slack. The risk management and research tools offered by Moody’s Analytics should come in handy for businesses during an uncertain economic environment. 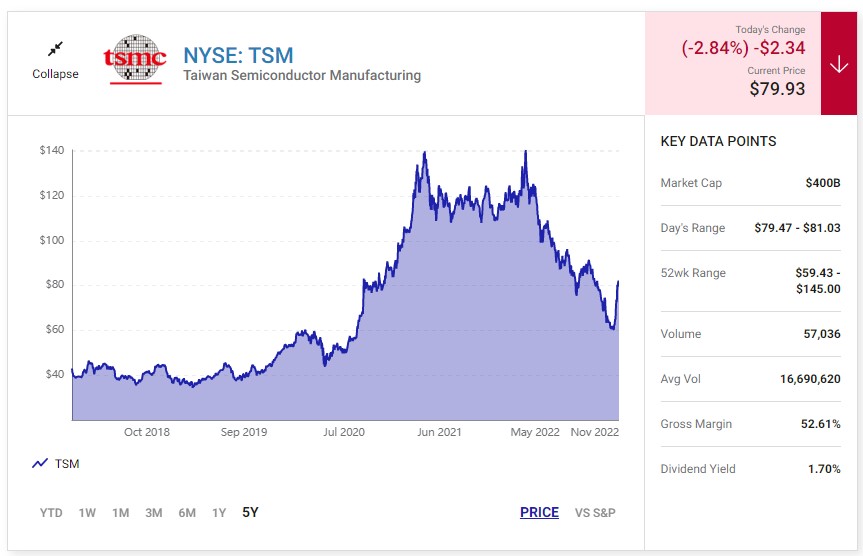 9. Taiwan Semiconductor Manufacturing Company: 1.4%
The newest addition and biggest buy during the third quarter for Warren Buffett’s company is semiconductor stock Taiwan Semiconductor Manufacturing Company (TSM), or TSMC. Buffett buying tech stocks is a rare event. But the important connection here is that TSMC is the sole supplier of the silicon processors Apple uses in all of its products. If Buffett loves Apple, it’s only logical that he should be very optimistic about its key chip supplier.

10. BYD: 1.3%
Bet you didn’t realize that China-based electric vehicle (EV) manufacturer BYD (BYDD.F) was a top 10 holding for Buffett. By 2035, the China Society of Automotive Engineers predicts that more than 50% of all new vehicle sales in the country will run on alternative energy (virtually all of which will be EVs). Perhaps most impressive, BYD outsold EV kingpin Tesla (TSLA) in the second quarter, with more than 354,000 EVs shipped. There’s little question that the Oracle of Omaha snagged a winning investment with BYD. 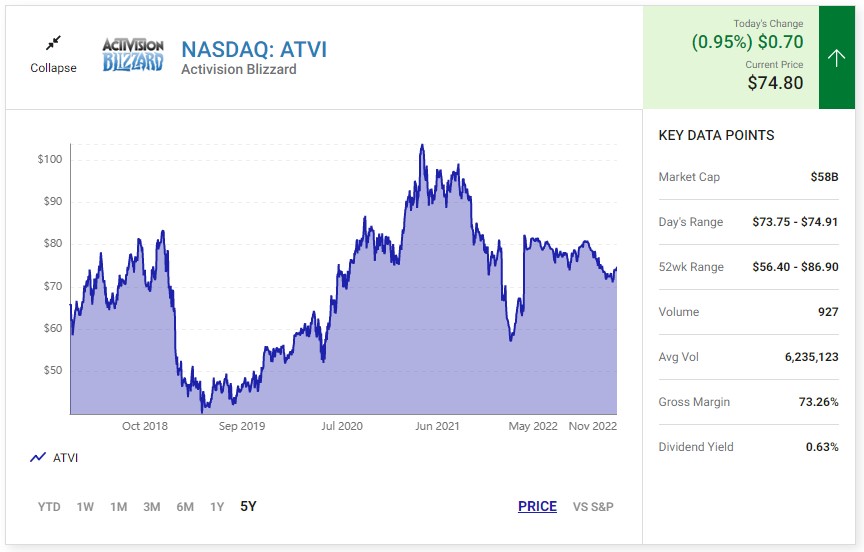 11. Activision Blizzard: 1.3%
Although Warren Buffett is known for his long-term investing prowess, he’s made no secret that his company’s stake in gaming stock Activision Blizzard (ATVI) is entirely for arbitrage purposes. Microsoft (MSFT) made an all-cash offer of $95/share to acquire Activision in January. If the deal were to be complete, Activision would deliver 29% upside from where it closed on Nov. 15. However, with regulators looking into the deal, it’s no certainty that Microsoft will increase its gaming industry exposure or be able to further its metaverse ambitions.

12. HP: 1.1%
Last but not least is personal computing (PC) and printing solutions specialist HP (HPQ). Even though HP’s best growth days are in the rearview mirror, PC sales generate highly predictable cash flow, which has allowed the company to increase its dividend, as well as repurchase more than $1 billion worth of its common stock for eight consecutive quarters (and counting). With a forward-year price-to-earnings ratio of less than eight, there would appear to be a relatively safe floor beneath HP stock.