Still, the damage inflicted by the bear market of 2022 has been far and wide. Only one of the 11 S&P 500 sectors is up for the year. That’s the energy sector, which has gained 60% — remarkable, considering the carnage everywhere else.

But the key question now is: What comes next after a bear market? To answer that question, let’s start with a stroll down memory lane by looking at a short history of bear markets.

And I’ll show you why bull market gains can be well worth the wait during bear markets.

Bear-Market History Lessons
First, the terms bear market, pullback, and correction get thrown around a lot, but they all mean different things. I want to make sure you understand the difference.

The exact definitions vary depending on who you talk to, but here’s a general breakdown:

There are lots of pullbacks in stocks every year, even in bull markets. And most pullbacks do not turn into bear markets.

Corrections are less common, but they still happen frequently enough, even in uptrending markets.

Most investors consider true bear markets to be a rare animal to be avoided at all costs. But bear markets are actually a lot more common than most folks think. The fact is, bear markets happen about every 3.5 years on average.

Investors also have painful memories of bear markets lasting many years. But the average length of a bear market is less than one year, 11.1 months to be exact.

In fact, the shortest bear market on record was the Covid-induced bear in 2020. It took just one month for the S&P 500 to drop 33.9% — and only five months for stocks to fully recover those losses. 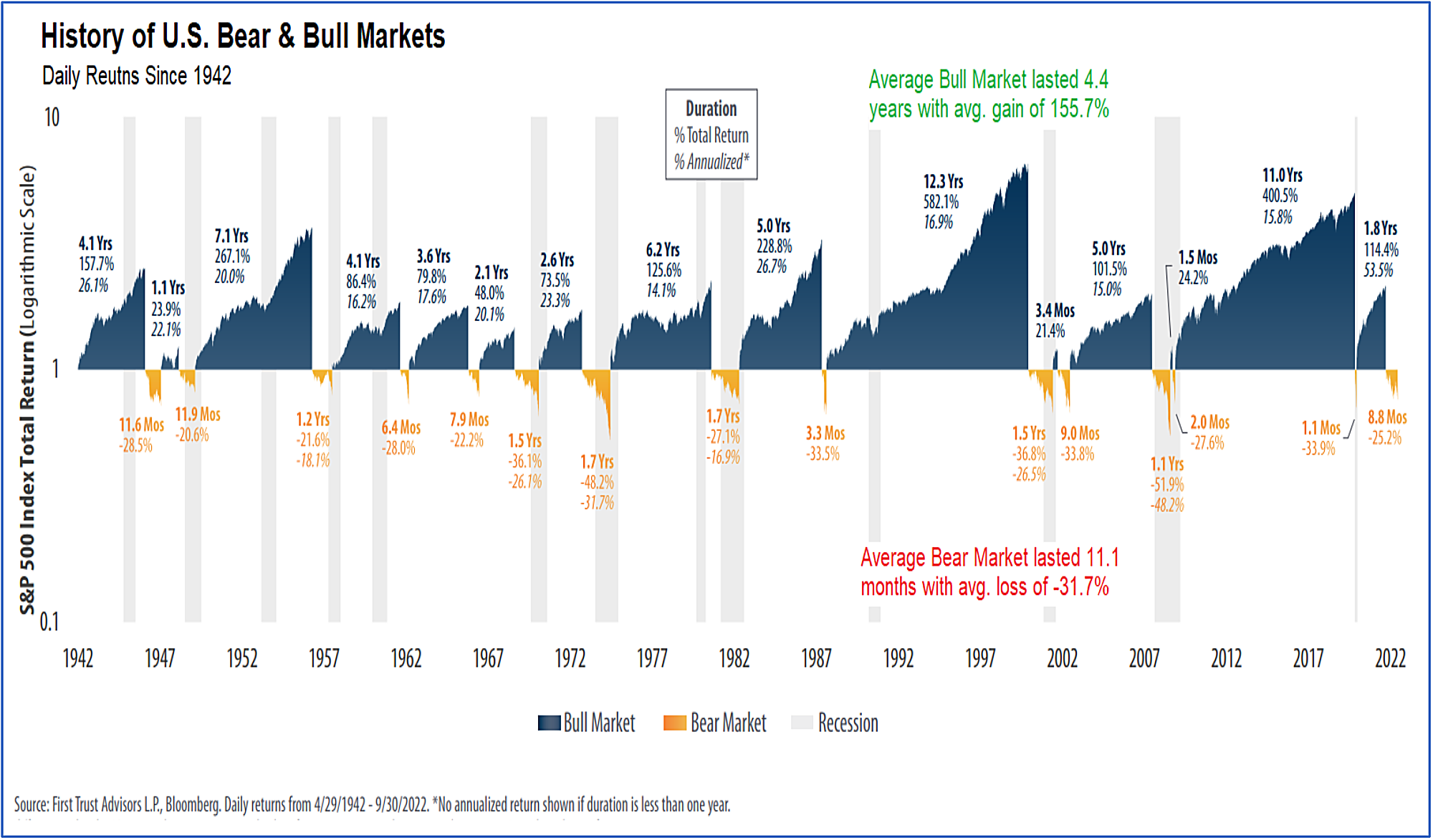 The most important thing to keep in mind about bear markets is that the next bull market gain has always more than made up for any losses, as you can see above.

Early Bull-Market Gains Can Be Worth The Wait
History shows that since World War II, the average bear market has cost investors 31.7% of their hard-earned money. And the bad times have lasted less than a year on average.

But the record also shows that bull markets earn average gains of 155.7% for stock investors. And the good times roll a lot longer; 4.4 years on average.

So, in the long run, you may be far better off staying invested, especially after a big market decline. That’s because the next bull market should make up for any lost wealth, and then some.

Of course, that’s easy to say based on the historical facts. But emotionally, it can still be difficult to open your year-end account statement and see just how big a hit you took in 2022.

You may be tempted to cut your losses and get out of the market for a while. But that can often be the worst thing to do, especially after you’ve already experienced a big drawdown.

Because if you are out of stocks entirely, you could easily miss the opportunity for a big rebound in your account value when the next bull market rolls around.

And the good news is, early bull-market gains can be worth waiting out a bear market. 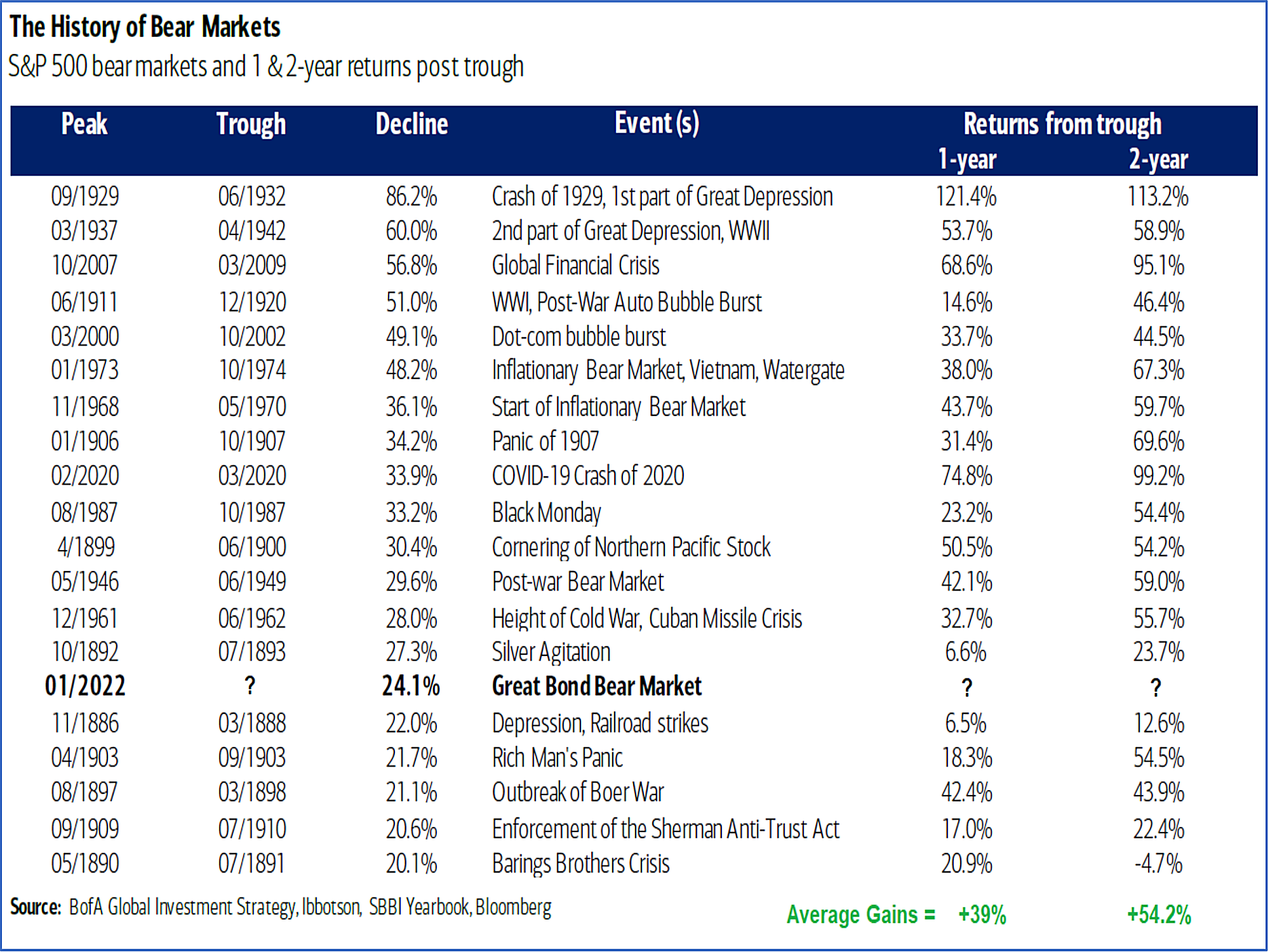 The table above shows a slightly different tally of bear markets from BofA Global Research going all the way back to 1929.

The exact dates and events that led to these bear markets aren’t really that important. What’s most interesting to me is the data in the two columns on the right. It shows you the subsequent stock market returns one and two years after each bear market ends.

The returns are lucrative, averaging 39% in the first year after a bear market and 54.2% two years later. That is well above the 10% average return of the stock market on any given year.

And that’s where our TradeSmith market health and trend indicators can be so incredibly powerful to help tell you when the next bull market may be getting underway.

So, it pays to be cautious right now about committing new money to the stock market until we see some improvement in these indicators.

But, as always, there are ways to make money in any market… if you know where to look.

How To Find Bounce-Back Blue Chips In A Bear Market
One approach I like to use personally is finding battered blue chips that bounce back.

I watch for our system to flash fresh Entry Signals for former market favorites that fell out of favor into the Red Zone.

Here are two well-known stocks that recently flipped from the Red Zone back into the Green Zone. And you may want to keep a watchful eye on them.

General Electric Co. (GE), an iconic blue chip, once had the largest market cap in the world. It fell (hard) from grace in recent years but is still a major industrial conglomerate, bringing in more than $74 billion in revenue last year. GE just triggered an Entry Signal this week and is back in the Green Zone.

Gilead Sciences Inc. (GILD), a biotechnology giant with $27.3 billion in sales last year, just flipped back into the Green Zone with a fresh Entry Signal early this month. I like the fact that health care stocks in general tend to be defensive stocks that hold up well even in difficult markets like this.

These two blue-chip stocks are proof that you can still find bullish opportunities even during a bear market.

Grab the Investing Toolkit that's Giving Users the Wealth and Confidence to Retire for Good [sponsor]
Discover a groundbreaking new way to: Know when to buy and sell any stock, ETF or mutual fund... Perfectly position size every investment you make... Sync your accounts and newsletters inside TradeStops' "Command Central" dashboard... And much more! Details here...