Warren Buffett is arguably the greatest investor to ever live. We’re talking about a 20% CAGR going back more than five decades now. And he’s amassed a personal fortune north of $100 billion in the process.

Nobody has ever done it better, for longer. So when Buffett makes moves, us mere mortal investors tend to take notice.

Well, Buffett has recently made a move. A very interesting one. And I think it could be a signal to get into one specific area of the market.

Today, I want to tell you about a stock that Warren Buffett has recently been buying in a big way, and what this might mean for the rest of us.

First, let’s be clear about what we’re talking about. Warren Buffett oversees a common stock portfolio worth over $300 billion for his conglomerate, Berkshire Hathaway (BRK.A, BRK.B). Berkshire Hathaway is the company he’s controlled as CEO for more than 50 years. While Buffett has two lieutenants – Todd Combs and Ted Weschler – assisting him with the portfolio, Buffett is still the CIO and main capital allocator by a long shot.

So which stock has Warren Buffett’s firm recently been loading up on?

It’s Taiwan Semiconductor (TSM). Buffett’s firm opened a new position in TSM during Q3 2022, and we know this after Buffett’s firm’s 13F filing just came out. The 13F filing covers all transactions for the prior quarter, and it generally gets released 45 days after quarter end.

While it could have been Combs or Weschler orchestrating the move, the size of the investment does lend credence to the idea that Buffett was behind it. Regardless, Buffett and the rest of Berkshire Hathaway shareholders have that exposure anyway.

Let’s talk about the business real quick.  Taiwan Semiconductor is a multinational semiconductor contract manufacturing and design company. It has a market cap of $360 billion. It’s one of the largest semiconductor manufacturing companies in the world. If the corporate name didn’t already clue you in, the company is based out of Taiwan.

The idea that Buffett doesn’t do tech became a wrong idea a long time ago. But the big reason why I think this is a classic Buffett play is because of the valuation. Buffett knows that while price is what you pay, value is what you get. And after this stock’s 43% YTD drop in price, even as the business and its intrinsic value hasn’t collapsed in that same fashion, the valuation has become compelling. 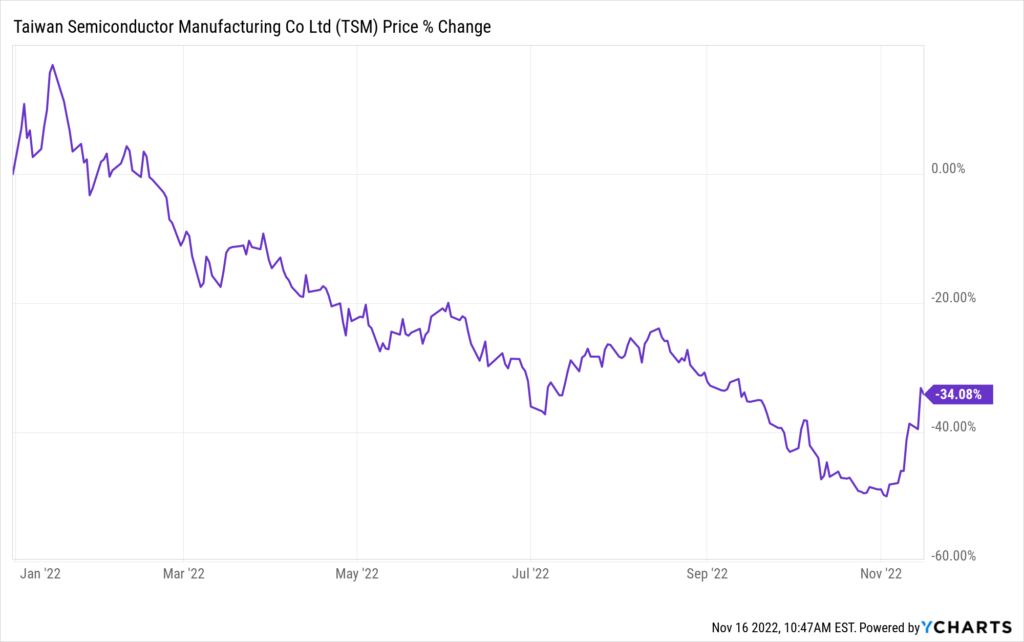 This stock looks cheap at every angle. The P/E ratio of 15.4 is well off of its own five-year average of 23.5. When you’re lower by nearly 10 turns on the earnings multiple, you know you’ve got some extreme pessimism baked into a stock. The P/CF ratio shows a similar disconnect. At 8.5, we’re quite a bit lower than the 14 times cash flow the stock has averaged over the last five years.

Another way it’s classic Buffett? The growing dividend, of course. Buffett might just be the world’s richest and most successful dividend growth investor, because almost every single investment he ever makes is in a business that pays a safe, growing dividend. And why wouldn’t Buffett want this? It’s a great litmus test for safe, growing cash flow – can’t have the former without the latter.

Also, it provides him with constant, growing cash flow that he can allocate as he pleases. TSM offers a 2.5% yield right now. And the company has been increasing its dividend, albeit not in the smooth, consistent manner that I’d personally like to see. The company increased its dividend by 25% in its native currency in Q1 2021. Before that, the dividend was increased by 25% in its native currency in Q1 2019.

The dividend growth has, of course, been funded by business growth. TSM’s revenue has more than tripled over the last decade. EPS has compounded at an annual rate of 15.8% over that time frame. Really impressive top-line and bottom-line growth. And despite the stock’s miserable performance this year, TSM’s most recent quarter – Q3 – saw the company beat on both the top line and bottom line. 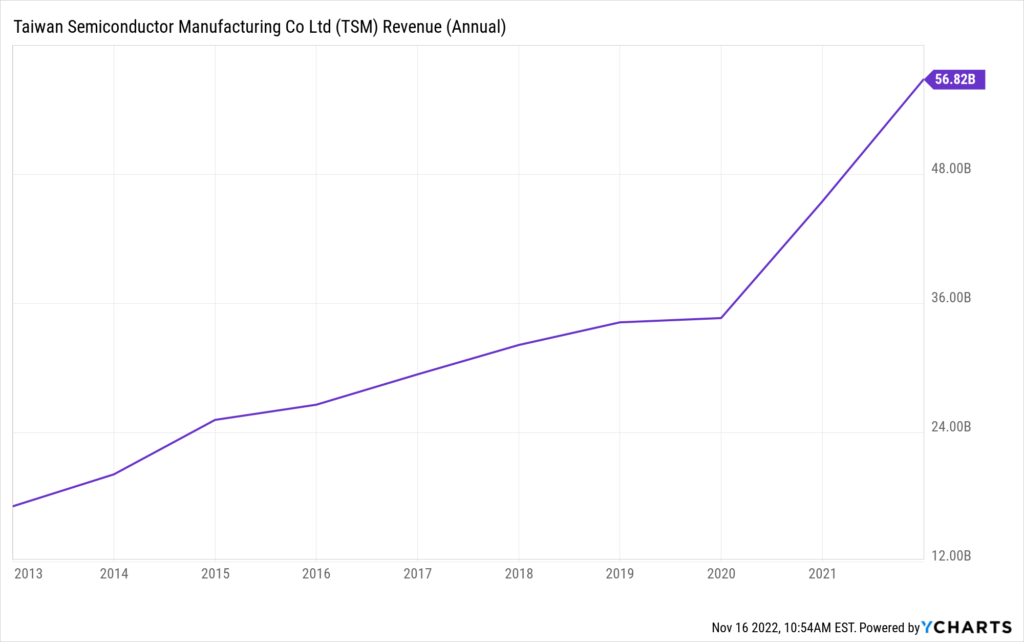 Revenue growth came in at a monstrous 36% higher YOY.  None of this should be a surprise, as the world is increasingly hungry for high-end chips. I can’t imagine a future society that will demand less semiconductors, not with the Internet of Things just getting started. And TSM has become a critical part of this digital infrastructure, as it’s one of the only companies in the world producing a variety of high-end chips.

All good. But what about the elephant in the room? Because of TSM’s critical importance to the global economy, and because China has become increasingly aggressive with rhetoric around its goals to reunify Taiwan with mainland China, TSM has become a geopolitical hot potato. And I think that has a lot to do with the company’s stock performance this year.

The US is trying to mitigate future risks through the passage of The CHIPS and Science Act in 2022, which will, in part, subsidize the building of certain semiconductor fabs in the US. Even TSM itself is building new fabs in the States. This will take time, however. Meanwhile, TSM, and the world at large, is in a bit of a precarious position.

No matter how you feel about TSM, though, I think this move by Berkshire Hathaway is a big signal. The signal is this: It might now be time to jump into chips. 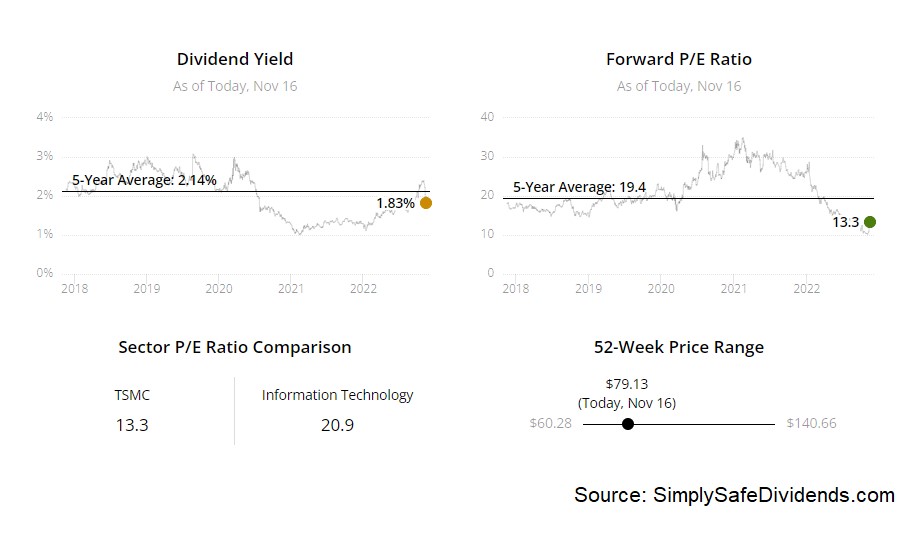 This area of the market has been a no-go of late. Anything that touches chips has been absolutely miserable for almost the entirety of 2022. TSM is down 40%+, and this is one of the most important and valuable players in the space. TSM has been printing money, yet the stock is acting as if the company is going out of business. And this is a similar theme for many major players across the industry.

However, because of the geopolitics, and because of the intermittent pattern of the company’s dividend increases, TSM isn’t my favorite idea in the chip space.  While Buffett is a personal hero of mine, I’ve been known to disagree with his moves from time to time.

A good example of this was when I called his selling out of Big Pharma in late 2021 as a mistake. Big Pharma has been “Big Performance” in 2022, by the way. Well, I’m not calling TSM a mistake. I actually think now could be just the right time to start jumping into chips after compressed valuations across the entire space has created massive dislocations. It’s just that I’m not sure that TSM, in particular, makes the most sense for long-term dividend growth investors.

So what are some other ideas that might make more sense? We talked about Texas Instruments (TXN) – only one month ago, discussing its recent dividend increase and overall appeal for long-term dividend growth investors. Texas Instruments, which is an analog chip business, has been a dividend growth stalwart, increasing its dividend for 19 consecutive years. It offers a higher yield than TSM, and it doesn’t have the same geopolitical risk.

Want another idea? I’ve got you covered. We highlighted Lam Research (LRCX) – in September, going over why this very high-quality semi cap equipment company looks like a fantastic undervalued opportunity for long-term dividend growth investors.

It’s gone on a bit of run of late, but the stock is still down more than 30% YTD. And based on the estimate of the business’s intrinsic value of approximately $600/share, it continues to look undervalued here. Also, as a bonus, I’m currently researching and working on another high-quality idea in the chip space. A full analysis and valuation video on this idea will be coming out very soon. Stay tuned to the channel for that.

Whichever way you decide to play it, I think Berkshire Hathaway has signaled that it might be time to jump into the chip space.

Buffett likes to be greedy when others are fearful. Well, with some of these stocks down 40%+, even while the businesses have been printing money at the same time, I’d say the market has been extremely fearful around the chip space. And that’s precisely why it’s time to consider getting greedy alongside the Oracle of Omaha.

I’m not saying to go all-in on chips specifically, or even tech broadly. But if you’ve been staying away from the carnage all year long, thinking about tip toeing your way in here, while being thoughtful around exposure seems like a pretty good idea to me.