Even after accounting for Thursday’s ginormous rally following a lower-than-expected change in the year-over-year inflation rate, the stock market is having a rough go of things in 2022. The ageless Dow Jones Industrial Average, broad-based S&P 500, and tech-dependent Nasdaq Composite have all plunged into bear market territory.

But when there’s pain on Wall Street, there’s also opportunity. Historically, stock market crashes, corrections, and bear markets have represented the ideal time for long-term investors to put their money to work. I certainly lump myself in that category of patient/buy-and-hold investor types.

Since the year began, 73 buy orders spanning 23 unique stocks have been executed in my investment portfolio. Some of these buys led to the creation of a new position, while others added to existing stakes. Here’s a brief rundown of all 23 stocks I’ve bought during the 2022 bear market (presented in no particular order).

1. Alphabet
Alphabet (GOOGL) (GOOG), the parent company of internet search engine Google and streaming platform YouTube, is a new addition to my portfolio in 2022 (I specifically bought GOOGL). Alphabet’s Google accounts for 92% of global internet searches, and Google Cloud has grown to become the world’s No. 3 provider of cloud infrastructure solutions. Alphabet has never been this inexpensive relative to future earnings or cash flow.

2. Novavax
Biotech stock Novavax (NVAX) is another new addition. Despite running into delays and manufacturing snafus for its COVID-19 vaccine, the company’s recurring revenue opportunities, domestic and abroad, remain intriguing. More importantly, Novavax has plenty of cash on hand, and it’s demonstrated that its drug-development platform works. I look forward to potential combination vaccines from Novavax (e.g., COVID-19/influenza).

3. AT&T
While I generally go after growth stocks, I won’t turn down an inflation-busting dividend yield. I’ve added to my existing position in AT&T (T) on a few occasions during the 2022 bear market. AT&T’s wireless division should benefit from higher data consumption tied to the 5G revolution, and its balance sheet has considerably more financial flexibility following the spinoff of content arm WarnerMedia in April.

4. EverQuote
Online insurance marketplace EverQuote (EVER) is one of my riskier long-term investments, given that the company is currently losing money. The catalyst here is that digital ad growth in the insurance space is growing more than three times faster than traditional insurance advertising channels. EverQuote should be able to sustain a double-digit long-term growth rate while expanding into new insurance verticals (home, rental, health, life, and commercial).

5. Intel
Semiconductor stock Intel (INTC) is the first chipmaker I’ve bought in a decade and a new addition to my portfolio. Though it’s facing clear headwinds at the moment — supply chain challenges, weakening chip demand, and Advanced Micro Devices (AMD) chipping away at its market share — Intel is still the undisputed central processing unit market share leader in personal computer, mobile, and data center servers. With the CHIPS Act providing subsidies for domestic manufacturing plant construction, the framework has been laid for a healthy turnaround. 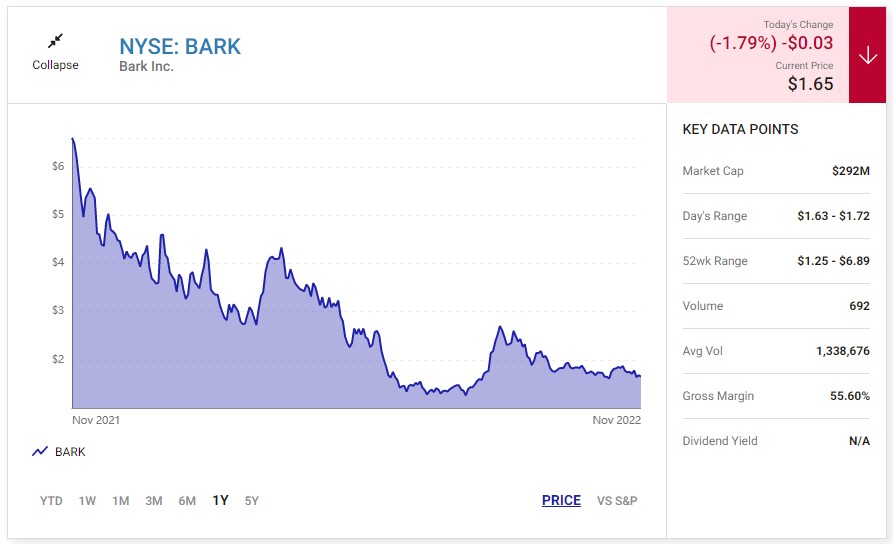 6. Bark
Small-cap dog-focused services provider Bark (BARK) is a stock I’ve added to more times than I count in 2022. Although it’s performed poorly since its debut in December 2020, the pet industry has routinely demonstrated that it’s pretty much impervious to economic weakness. Bark’s online subscription focus (around 90% of its sales usually originate from its direct-to-consumer segment) should help lower overhead costs and boost margins over time.

7. Teladoc Health
Virtual-visit stock Teladoc Health (TDOC) has had a miserable year. However, this isn’t a fad stock. It grew sales by an average annualized rate of 74% in the six years prior to the pandemic, and it’s making life easier for patients, physicians, and insurers. My assumption is we’ll see narrowing losses in 2023 as one-time costs tied to the Livongo Health buyout are put into the rearview mirror. Further, cost synergies and higher-margin subscriptions should provide a boost.

8. Meta Platforms
Another stock I’ve aggressively added to of late is Meta Platforms (META). Ad-driven stocks seem to be priced as if they’re going to die every time a bear market rolls around, and this just isn’t the case. Meta has four of the most downloaded/used social media assets on the planet, which should give it exceptional ad-pricing power during long-winded periods of expansion. As a bonus, the company has close to $32 billion in net cash on its balance sheet.

10. Visa
Payment processor Visa (V) is a company I added for the first time in September. Despite being cyclical, Visa spends a disproportionate amount of time benefiting from economic expansions than navigating through recessions. It holds a 54% share of credit card network purchase volume in the U.S. and is looking at a multidecade opportunity to organically or acquisitively push into underbanked emerging markets.

11. Fastly
I’d consider Fastly (FSLY), like EverQuote, to be one of my riskier buys during the 2022 bear market. As businesses shift their data online and into the cloud, the need to move data from the edge of the cloud to end users as quickly and securely as possible will grow. I see this as a sustainable opportunity for Fastly to grow by a double-digit percentage. The key for Fastly is to rein in expenses to some degree as revenue scales.

12. Innovative Industrial Properties
In June, I took the plunge and opened a position in cannabis-focused real estate investment trust Innovative Industrial Properties (IIPR). IIP, as the company is known, generates predictable cash flow thanks to leases typically averaging 15 or more years. While acquisitions are its primary means of growth, it does have modest organic growth components built in as well. And how could I turn down a 7% yield?

13. Qorvo
Not long after buying Intel, I opened a position in semiconductor solutions company Qorvo (QRVO). Qorvo generates a sizable percentage of its sales from Apple (AAPL). With the iPhone cemented as the top smartphone in the U.S., Qorvo’s cash flow has been rock-solid for many years. With the opportunity for long-term growth from ancillary channels, such as advanced antennas used in next-generation vehicles, Qorvo appears cheap.

14. NextEra Energy
Electric utility stock NextEra Energy (NEE) is yet another new addition during the 2022 bear market. Whereas most utility stocks are slow-growing, NextEra has sustained a high-single-digit growth rate for more than a decade due to its aggressive green energy investments. No utility generates more capacity from wind or solar than NextEra — and I expect that’ll remain the case for quite some time.

15. Baidu
China-based Baidu (BIDU) is the newest addition to my portfolio. Despite China stocks facing the threat of delisting in the U.S. and tighter regulation domestically, at 9 times forward earnings, Baidu was too cheap to pass up. Its search engine held a 60% share in China for October, making it a logical go-to for advertisers. Further, its investments in artificial intelligence and cloud computing have resulted in jaw-dropping growth, even in an uncertain economic environment. 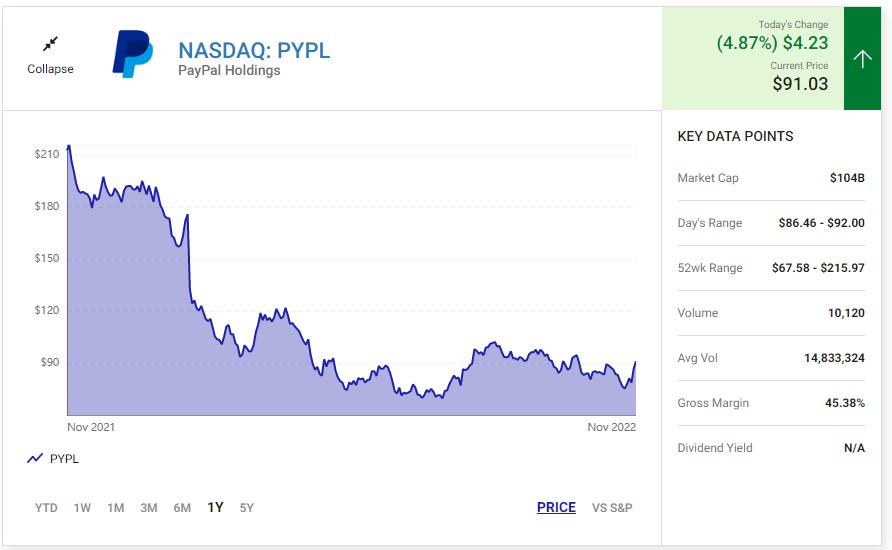 16. PayPal Holdings
Fintech stock PayPal Holdings (PYPL) is a brand-new holding for me, and it’s been purchased on multiple occasions throughout the year. Despite historically high inflation, total payment volume growth has been resilient, and active account engagement has been climbing — 50.1 payment transactions over the trailing-12-month (TTM) period versus 40.7 over the TTM at the end of 2020. PayPal looks like a screaming buy, given how early we are in the digital payment growth cycle.

17. Walgreens Boots Alliance
As noted, I do love a good bargain, and adding to my existing position in pharmacy chain Walgreens Boots Alliance (WBA) made sense. Walgreens is in the midst of a turnaround strategy that’s seen the company slash its annual operating expenses by more than $2 billion and emphasize direct-to-consumer sales. Even more exciting is its partnership with VillageMD that’ll target opening 1,000 full-service health clinics by the end of 2027. Walgreens is a gem for value and income investors.

18. Warner Bros. Discovery
Once again, anything having to do with ads has been given the heave-ho in the 2022 bear market. That’s led to some incredible opportunities for patient investors and is why I added to my stake in Warner Bros. Discovery (WBD). The streaming subscription growth potential for Discovery+/HBO Max, coupled with a near-certain rebound in ad revenue during long-winded periods of economic expansion, makes for an inexpensive media stock.

19. Pinterest
The 2022 bear market was also the perfect opportunity to add to my existing stake in social media stock Pinterest (PINS). When examined over a five-year stretch, Pinterest’s monthly active users (MAUs) count has been on a fairly steady incline, and most importantly, the company has had no issue monetizing these users. Perhaps best of all, Pinterest’s MAUs willingly share what interests them, allowing merchants to easily target these potential shoppers and paving the way for Pinterest to become a meaningful e-commerce player.

20. Planet 13 Holdings
I opened a position in small-cap marijuana stock Planet 13 Holdings (PLNH.F) in March. Despite not reaching recurring profitability as of yet, Planet 13 has demonstrated a unique operating model that other pot shops can’t replicate. Its two SuperStores are gigantic, with just as much focus placed on nostalgia as on making sales. With this unique concept in its corner and the company opening neighborhood-styled stores in Florida, I believe recurring profitability is not too far off. 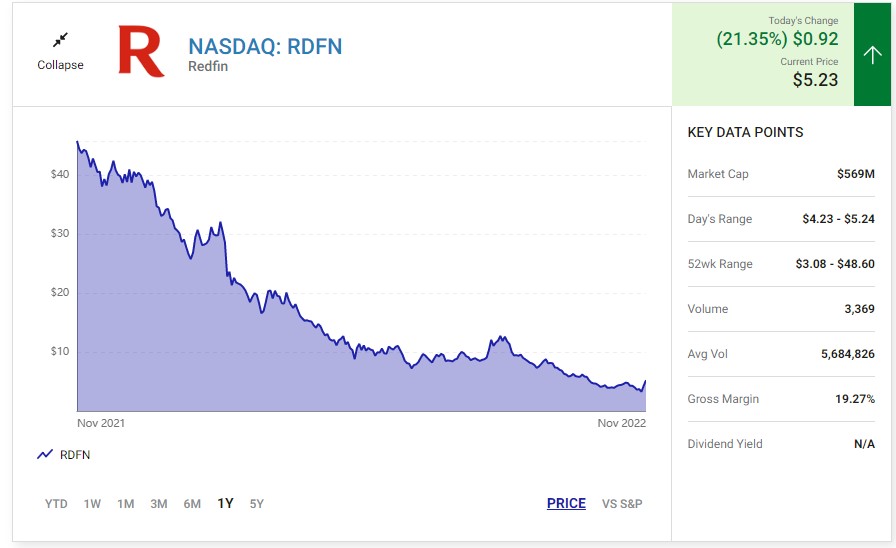 21. Redfin
Arguably the riskiest stock I’ve bought during the bear market downturn (albeit a very small position) is tech-driven real estate company Redfin (RDFN). Redfin substantially undercuts traditional real estate companies on listing fees, and it offers a number of personalized services to help users get the best bang for their buck when selling their homes. The key for Redfin is going to be cost controls as higher mortgage rates slow homebuying activity.

22. PubMatic
Next to Lovesac, small-cap adtech stock PubMatic (PUBM) is my favorite to buy and hold. It’s crystal clear that ad dollars are shifting from print to digital channels, and PubMatic finds itself at the center of this rapid growth. What’s particularly interesting about this company is that it built its cloud infrastructure. Not having to rely on a third party to operate its programmatic ad platform should lead to superior operating margins as revenue scales.

23. Amazon
Last but not least, I’ve added to my existing stake in e-commerce kingpin Amazon (AMZN) on more than one occasion. Though Wall Street is fixated on the company’s struggling retail operations, its dominant online marketplace isn’t a key contributor to cash flow. Growth from the world’s No. 1 cloud provider, Amazon Web Services (AWS), as well as advertising services and subscription services, are what really drive Amazon’s cash flow. There’s nothing holding back these segments at the moment, which makes Amazon such an incredible buy.