It doesn’t matter if you’ve been investing for the past couple of months, or five decades: This has been one of the roughest years for investors on record.

Since the ageless Dow Jones Industrial Average (^DJI), widely followed S&P 500 (^GSPC), and technology-focused Nasdaq Composite (^IXIC) achieved their all-time highs less than a year ago, they’ve respectively tumbled by as much as 22%, 28%, and 38%. This places all three indexes in a bear market.

Although all bear-market declines are golden opportunities for investors to put their money to work (a point I’ll expound on a bit later), the heightened volatility and velocity of downside moves during bear markets has investors wondering when and where the bottom might be reached.

This indicator has an impeccable track record of forecasting bear markets
Recently, I’ve examined a number of indicators that all portend additional downside for the broader market. These include outstanding margin debt, valuation-based indicators like the forward price-to-earnings (P/E) ratio for the S&P 500, and even technical indicators that I’ve leaned on as a gauge of investor sentiment.

Although no indicator or metric is perfect — if any was, everyone from Wall Street to Main Street would be using it by now — one indicator has a flawless track record of predicting bear markets (though with a catch), and a pretty solid track record of forecasting where the S&P 500 will bottom. I’m talking about the S&P 500 Shiller P/E ratio, which is also referred to as the cyclically adjusted price-to-earnings ratio (CAPE ratio).

With a traditional or forward-looking P/E ratio, a company’s or index’s trailing-12-month or forward-year earnings are used as the value determinant. The Shiller P/E ratio, however, utilizes inflation-adjusted earnings over the past 10 years in its calculation.

Since 1870, the S&P 500 Shiller P/E has surpassed and held above 30 on only five occasions during a bull-market rally. Every single occasion was eventually followed by a pullback of at least 20%. This includes the dot-com bubble, in which the Shiller P/E hit its all-time high of 44.19; the Great Depression, which saw the Dow Jones ultimately lose 89% of its value; and the current bear market. During the first week of January 2022, the Shiller P/E topped 40 for the first time in more than two decades.

Keep in mind there’s a caveat to using the Shiller P/E ratio to predict bear markets (the “catch” I alluded to above). When the Shiller P/E has surpassed and held above 30, a minimum 20% decline has eventually followed. However, there’s no telling where the peak will be or when it’ll occur. For instance, the Shiller P/E surpassed 30 during the third quarter of 2020, but took over a year to peak above 40 during the first week of 2022. 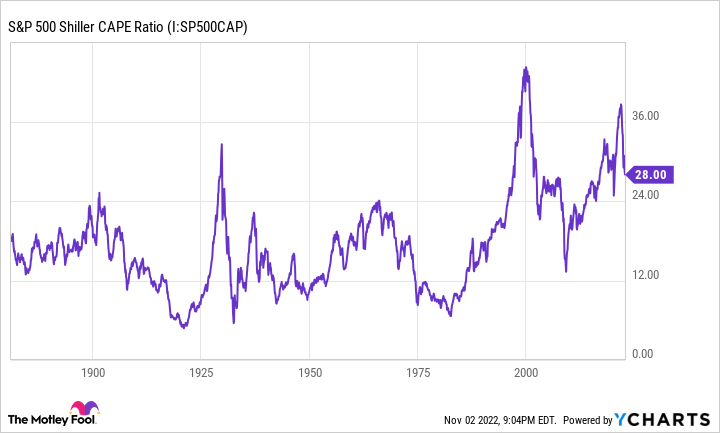 Is additional downside in the cards for the Dow, S&P 500, and Nasdaq Composite?
In addition to accurately forecasting five 20% or greater declines in the S&P 500 since 1870 when certain valuation-based parameters have been met, the Shiller P/E ratio has a knack for closely estimating where bear markets will ultimately bottom.

Prior to the mid-1990s, the Shiller P/E ratio spent virtually all of its time bouncing back and forth between 5 and 25. But over the past quarter of a century, readings between 20 and 40 have been the norm. This acceptance of higher valuation multiples has to do with historically dovish Federal Reserve policy fueling loan demand and economic growth, as well as the internet democratizing the flow of information from publicly traded companies to investors.

Even though the past 25 years haven’t mirrored the 127 years before them, there have been common troughs in the Shiller P/E ratio following sizable drawdowns in the broader market. In particular, the Shiller P/E ratio found its nadir around 22 following numerous key pullbacks, such as the dot-com bubble, fourth-quarter correction of 2015, fourth-quarter correction of 2018, and coronavirus crash of 2020.

As of the closing bell on Wednesday, Nov. 2, the S&P 500 Shiller P/E stood at 27.66. That’s well off its January high, but still significantly elevated from every single bear-market bottom over the past quarter of a century, and throughout stock-market history.

If the Shiller P/E were to fall to its common valuation support range of 22 over the past quarter of a century, the S&P 500 would likely find its bottom around 2,990, give or take a little bit in each direction.

Ignore the noise and let this virtual guarantee be your guide
While big red arrows can be painful to look at in the short run, there is good news — at least for patient investors.

Since 1950, there have been 39 separate instances when the S&P 500 declined by a double-digit percentage, according to data from sell-side consultancy firm Yardeni Research. Excluding the current drawdown, every single double-digit decline was eventually fully recouped by a bull-market rally.

Furthermore, market analytics company Crestmont Research has demonstrated for years how powerful buy-and-hold investing can be. Crestmont published data earlier this year that examined the 20-year rolling total returns, including dividends paid, of the S&P 500 for the past 103 end years (1919-2021). In other words, it looked at how investors would have performed (including dividend payouts) if they’d purchased an S&P 500 tracking index at any point since 1900 and held for 20 years.

The results showed that investors would have generated a positive annual average total return over all 103 rolling 20-year periods. Only a small handful of 20-year rolling periods yielded an average annual total return of 3% to 5%, while approximately 40% of all ending years produced average annual total returns of 10.9% to 17.1%. Trusting great businesses, and indexes comprised of high-quality companies, to grow over time has been a surefire strategy to build wealth.

Now is as good a time as any to put your money to work on Wall Street. Even if the stock market is weeks, months, or even over a year away from finding a bottom, history suggests that if you’re a long-term-minded investor, you’re wise to seek out bargains now.