Despite a healthy rebound during October, the stock market has endured a rough year. For instance, the broad-based S&P 500, which is viewed as the best barometer of U.S. stock market health, produced its worst first-half return since 1970 and plunged into a bear market.

But that’s still not as bad as the tech-heavy Nasdaq Composite (^IXIC), which has plummeted as much as 38% on a peak-to-trough basis since hitting a record high in November 2021.

Yet there’s a silver lining amid this turmoil: No matter how poorly the stock market has performed over a short time frame throughout history, a bull market rally has always, eventually, recouped losses by the major indexes (even the Nasdaq Composite!). This makes bear market declines an excellent opportunity to put your money to work.

In particular, it’s the ideal time to go shopping for beaten-down stocks that offer game-changing innovation. Here are four screaming bargains in the Nasdaq bear market that have the potential to double your money by 2026.

Teladoc Health
If you were to take a surface-scratching look at Teladoc Health’s (TDOC) operating results this year, you’d probably have a hard time believing it was a bargain. The company has taken two massive write-downs, which are likely tied to its grossly overpriced acquisition of applied health signals company Livongo Health. But these one-time costs haven’t changed the trajectory of Teladoc’s growth or upended the potential of this disruptor.

Teladoc is not a fad stock. Although virtual visits picked up in a big way during the COVID-19 pandemic, the company grew sales by an average annual rate of 74% in the six years leading up to 2020. What this demonstrates is that Teladoc’s telemedicine services are changing how personalized care is administered.

What makes Teladoc Health such an intriguing company is that it’s making life better for all facets of the treatment chain. It brings a convenience factor to the table for patients, while providing physicians with a means to keep closer tabs on chronically ill patients. Virtual visits are also cheaper than in-person visits and can lead to improved patient outcomes. This should make telemedicine a popular promotion for insurance companies. In other words, telemedicine has sustained high-growth potential.

Lastly, don’t overlook Livongo Health. Despite overpaying for the company, it should ultimately help Teladoc bring in high-margin chronic-care patients, as well as assist with cross-selling opportunities. 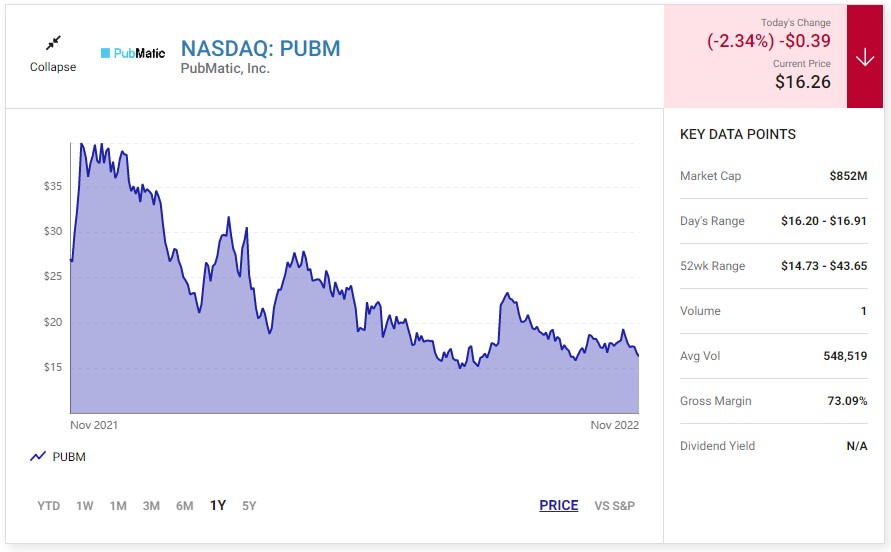 PubMatic
A second screaming bargain to scoop up during the Nasdaq bear market that can double your money over the next four years is small-cap adtech stock PubMatic (PUBM). Even though advertising revenue is one of the first things to get hit when the U.S. economy weakens, this relatively small player in the programmatic ad space is making big waves.

PubMatic is a sell-side provider (SSP), which means it helps publishing companies sell their digital display space. Since there’s been a lot of consolidation in the SSP arena in recent years, there aren’t many choices left for businesses.

Beyond just carving out its niche, PubMatic finds itself at the center of the fastest-growing aspect of advertising. According to a company presentation, the digital ad industry is expected to grow by 14% annually through mid-decade.

However, PubMatic has been consistently growing its sales by 20% to 50% from the prior-year period. That’s because it generates nearly three-quarters of its revenue from mobile and connected TV programmatic ads, which are among the fastest-growing ad channels.

But as I’ve previously pointed out, what makes PubMatic so special is the decision it made to develop and build its own cloud-based infrastructure. Not having to rely on a third-party provider for its programmatic ad platform should lead to higher operating margins than its peers as its revenue scales.

Planet 13 Holdings
The third screaming bargain that can help patient investors double their money by 2026 is U.S. marijuana stock Planet 13 Holdings (PLNH.F). Despite a lack of cannabis reform on Capitol Hill, there are more than enough state-level organic growth opportunities for a fast-paced company like Planet 13 to excel.

What really sets Planet 13 apart from other multi-state operators (MSOs) is the company’s SuperStores. While most MSOs have looked to establish a presence in 10 or more legalized states, Planet 13 has just three open dispensaries — two of which are truly massive. The Las Vegas SuperStore covers 112,000 square feet and features an events center, café, and consumer-facing processing center, while the Orange County SuperStore in California spans 55,000 square feet.

The key point here is that Planet 13’s stores are about far more than just selling. They’re an experience that other cannabis retailers simply can’t match. In addition to this nostalgia factor, Planet 13 incorporates technology for convenience, and relies on a wide variety of proprietary and brand-name, high-margin cannabis derivatives to drive itself closer to recurring profitability.

However, Planet 13s future isn’t entirely tied to its SuperStore model. With a medical cannabis retail operator license secured in Florida, the company intends to open around a half-dozen neighborhood-styled stores that each span roughly 4,750 square feet.

By 2024, Florida’s cannabis industry should rank third among U.S. states in annual sales. These neighborhood stores, coupled with its unique SuperStore model, gives Planet 13 a blueprint for success. 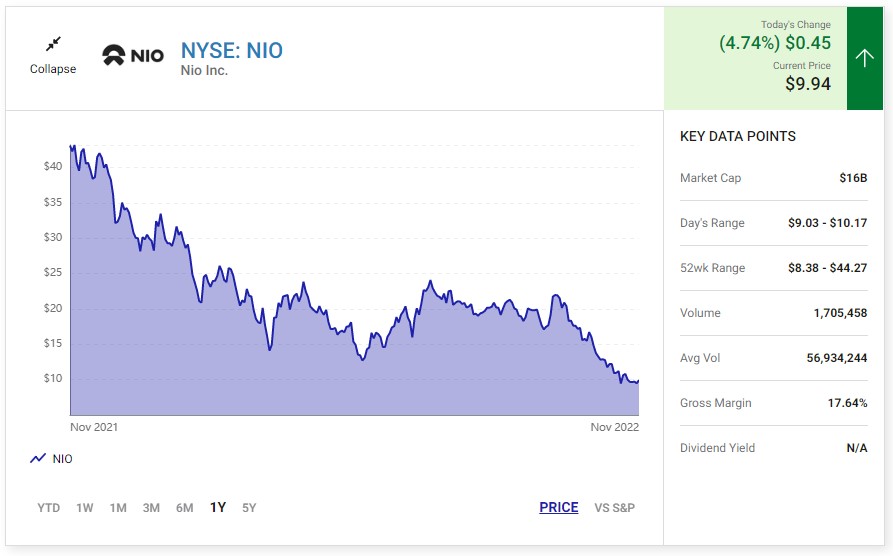 Nio
The fourth screaming bargain that can double your money by 2026 is China-based electric vehicle (EV) manufacturer Nio (NIO). In spite of clear supply chain concerns, historically high inflation, and China’s zero-COVID strategy, there are numerous reasons for patient investors to be excited about what they’re seeing from this company.

To begin with, there’s an undeniable long-term opportunity for global EV growth. Most developed countries want to reduce their carbon footprint, and EVs are the most logical answer to do so. By 2035, the expectation is for approximately half of all vehicles sold in China to be EVs.

In terms of production, Nio has held its own despite historic supply chain disruptions. In June through September, the company surpassed 10,000 EVs delivered each month. The company’s management team has previously suggested that it could reach a monthly production rate of 50,000 EVs in about a year, once supply chain constraints subside.

But most importantly, Nio is letting its innovation do the talking. For such a relatively new entrant, it’s impressive that the company has introduced over a half-dozen EVs, some of which can go head-to-head (and win) against established/legacy automakers. Tack on the company’s innovative battery-as-a-service subscription, and Nio looks to have a pathway to recurring profitability and sustained double-digit sales growth.