Investing in 2022 has been a challenge in every sense of the word. All three major U.S. stock indexes — the Dow Jones Industrial Average, S&P 500, and Nasdaq Composite — have tumbled into a bear market, with peak losses ranging from 22% to as much as 38% since hitting their respective all-time highs. There’s been no solace in the bond market, either, with bonds producing their worst full-year return ever!

However, the Oracle of Omaha has navigated his way through rough patches before.

Since becoming CEO of conglomerate Berkshire Hathaway (BRK.A) (BRK.B) in 1965, Warren Buffett has overseen his fair share of economic downturns, recessions, stock market corrections, crashes, and bear markets. Though each event has represented a short-term struggle, Buffett’s company has emerged stronger every time. Over 57 years, Warren Buffett has led his company’s Class A shares (BRK.A) to a scorching average annual return of 20.1%.

The Oracle of Omaha’s ability to vastly outpace the long-term performance of the S&P 500 is the result of numerous factors, including his unwavering determination to stick with his investments for long periods, his love of cyclical stocks, and the fact that Berkshire Hathaway’s portfolio is packed with dividend stocks. Buffett’s affinity for investing in highly profitable, time-tested businesses has helped his company and its shareholders weather periods of instability.

But not all Warren Buffett stocks are created equal — at least in the eyes of Wall Street analysts.

As of this time last week, Berkshire Hathaway held close to four dozen securities in its investment portfolio. Two of those holdings were labeled with aggressive price targets by Wall Street that suggest they could increase in value by 95% and 157%, respectively, over the next 12 months. 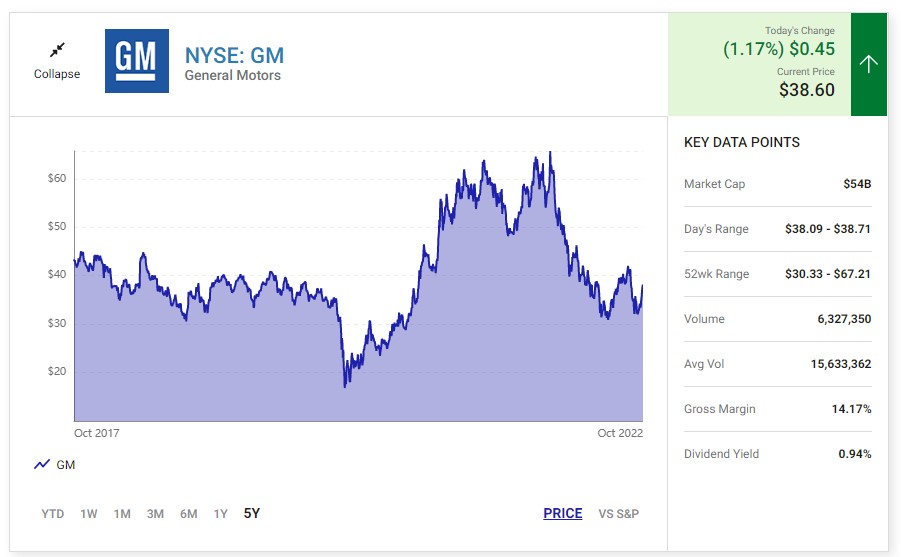 General Motors: Implied upside of 157%
If there’s a Wall Street price target on a Warren Buffett stock that’s bound to leave investors stunned, it has to be the sky-high $90 price target that analyst John Murphy of Bank of America (BAC) Securities set for automaker General Motors (GM). If this price target were to come to fruition, GM shareholders would enjoy a 157% gain from where shares of the company ended last week.

Murphy’s price target for General Motors, which was actually lowered by $5 from $95 in September, is backed by the belief that GM will become a global electric vehicle (EV) leader. Although Murphy acknowledges that supply chain issues are liable to hamper production for U.S. auto stocks into 2023, he also expects the demand cycle for U.S. autos won’t peak until 2028.

For its part, General Motors is aggressively spending on EV and autonomous-vehicle development, as well as battery research. The company has earmarked an aggregate of $35 billion through mid-decade, which is intended to cover a number of bases.

By the end of 2025, CEO Mary Barra expects her company to be producing more than 1 million EVs annually in North America (a significant percentage of these EVs will be high-margin trucks) and to have debuted a total of 30 new EVs globally. By the end of next year, GM should have two dedicated facilities for battery production.

Initial demand has been intriguing, though it’s important to remember that EVs represent a small portion of GM’s revenue, for now. For instance, the Chevy Silverado EV was introduced by Barra earlier this year. Through late July, the company has secured more than 150,000 reservations for the 2024 model.

The economics of moving to an EV-driven future are also compelling. As the company scales its EV and battery production, the expectation is for margins in this “new” segment to exceed 20% and for GM’s total margin, including internal-combustion engine vehicles, to rise 200 basis points to 14% by 2030. On a revenue basis, General Motors can double its sales by the turn of the decade.

Historically, auto stocks have been given little premium by investors, due to their strong cyclical ties and often debt-burdened balance sheets. But with GM’s long-awaited organic catalyst finally here, Murphy’s $90 price target seems tenable this decade — albeit not over the next 12 months.

Amazon: Implied upside of 95%
The other Warren Buffett stock that commands a lofty price target from Wall Street is none other than FAANG stock Amazon (AMZN). Analyst Ivan Feinseth of Tigress Financial set a $4,655 price target on the company earlier this year. But following its 20-for-1 forward stock split, Feinseth’s adjusted price target of $232.75 implies approximately 95% upside from where it closed this past week.

If you’re wondering why Feinseth believes Amazon can tack on more than $1.1 trillion in market value over the next year, look no further than its core growth drivers.

Believe it or not, the company’s dominant online marketplace isn’t among those growth drivers. Even though online sales account for the majority of Amazon’s revenue, online retail sales produce very thin margins. In theory, the company’s online marketplace could stagnate for years, yet Amazon’s operating cash flow could double every two to four years, thanks to rapid growth from its ancillary operating segments.

One growth driver highlighted by Feinseth is Amazon Prime. As of April 2021, the company had surpassed 200 million global Prime subscribers. However, this figure is likely much higher now — especially with Amazon holding the exclusive rights to Thursday Night Football. Subscription revenue tends to be recurring and generates much higher margins than online retail sales. 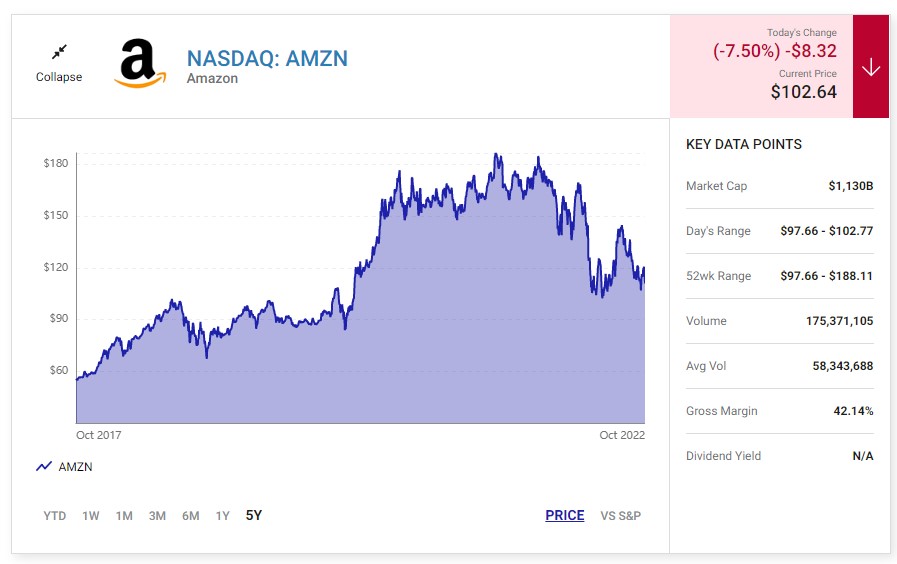 The other core catalyst cited by Feinseth is Amazon Web Services (AWS). Research firm Canalys estimates that AWS brought in 31% of worldwide cloud-service spending during the second quarter. With the exception of Microsoft (MSFT) Azure, no other cloud infrastructure service provider is within 23 percentage points of AWS.

The beauty of cloud computing is it’s still in its infancy. Thanks to the juicy margins associated with cloud services, AWS regularly accounts for more than half of Amazon’s operating income, despite generating only a sixth of the company’s net sales.

Perhaps the toughest challenge for Amazon is going to be convincing investors that it’s a bargain in a bear market. It’s not uncommon for Wall Street and investors to shun companies that trade at a premium valuation when equities are tumbling. From a traditional fundamental perspective, Amazon isn’t cheap.

However, valuing Amazon with traditional metrics has never worked well. Since the company tends to reinvest most/all of its operating cash flow, it makes more sense to examine its valuation relative to its cash flow. After spending the 2010s at a median year-end multiple of 30 times cash flow, Amazon shares can now be purchased for about nine times Wall Street’s forecast cash flow in 2025. That’s a bargain.

As with GM, Amazon’s lofty price is achievable. Just don’t expect it to happen over the next 12 months.