It’s been quite some time since investors have contended with such a volatile year on Wall Street. According to data provided by Charlie Bilello, the CEO of Compound Capital Advisors, there have been 53 trading sessions where the S&P 500 has lost at least 1% of its value in 2022, through this past weekend. That’s the highest annual total since the Great Recession in 2009, and we still have more than two months left in the year.

If this isn’t enough proof that it’s been a trying year, all three major U.S. stock indexes have fallen into a bear market.

But just because equities are volatile, it doesn’t mean investors have to head to the sideline. On the contrary, bear markets have historically been an excellent time to put your money to work.

What’s more, investors have options for putting their cash to work. Those folks who don’t have a stomach for heightened volatility or risk can buy safe stocks to weather the short-term storm and steadily grow their wealth over time. What follows are three extremely safe stocks with long histories of profitability, and they can double your money, including dividends paid, by 2028.

AT&T
The first exceptionally safe stock that has the potential to double your money, including dividends paid, by 2028 is telecom giant AT&T (T). As of this past weekend, it was yielding 6.49%. Over the next six years, this would equate to a 39% return from dividends alone.

In terms of volatility, AT&T has a beta of 0.65. This means it’s about 65% as volatile as the benchmark S&P 500. For instance, if the S&P 500 fell 1%, we would expect the stock to decline by just 0.65%. This lack of volatility is a reflection of wireless services and smartphones evolving into basic necessities over the past two decades. No matter how poorly the U.S. economy or stock markets perform, churn rates for AT&T’s wireless services remain relatively low. 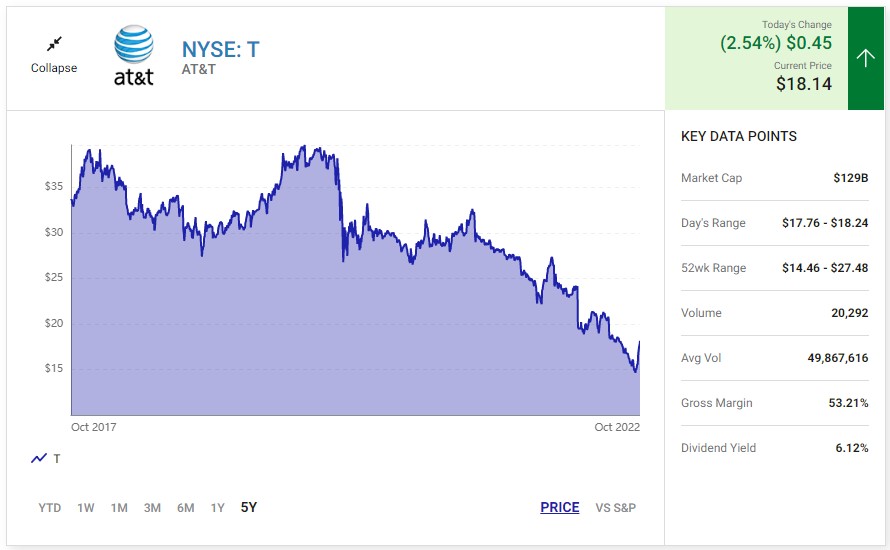 Although AT&T’s faster-growth days are now firmly in the rearview mirror, it does have two catalysts that can move the needle in the years to come. Without question, its biggest catalyst is the 5G revolution. It’s been roughly a decade since wireless download speeds were significantly improved. While it will cost a pretty penny for AT&T to upgrade its infrastructure, the expectation is for consumers and businesses to respond by using more data, which happens to be where the company generates its beefiest margins.

To add to this point, AT&T’s third-quarter results featured 5.6% revenue growth in wireless service over the prior-year period. That’s the fastest rate of wireless growth for the company in over a decade, which provides tangible evidence that its investments in 5G infrastructure are paying off.

The other notable driver for AT&T is the spinoff of WarnerMedia in April, which subsequently merged with Discovery to create Warner Bros. Discovery. When the deal closed, AT&T received $40.4 billion in cash, as well as the retention of select debt by Warner Bros. Discovery. The point being that AT&T’s debt-burdened balance sheet gained meaningful flexibility following this spinoff, which means its market-topping dividend should continue being paid out. 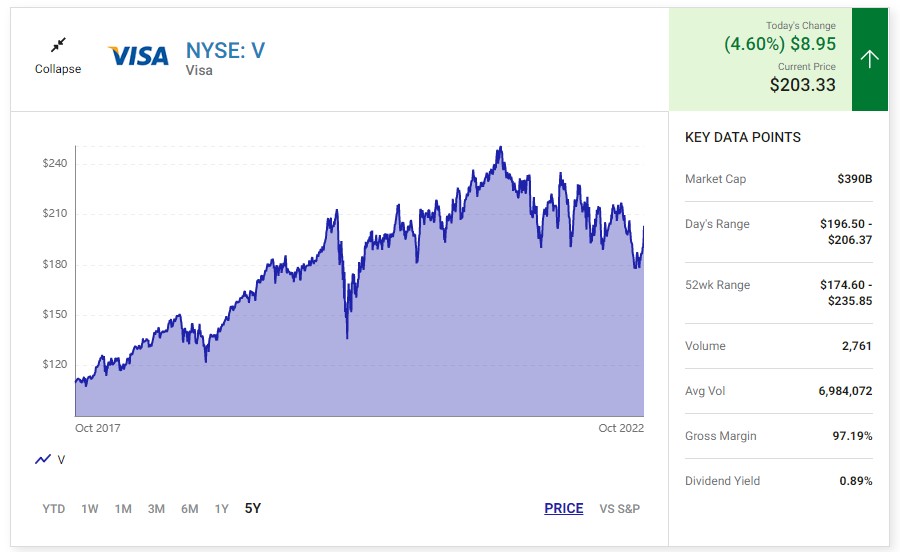 Visa
Whereas AT&T’s dividend should play a key role in helping investors possibly double their money by 2028, payment processor Visa’s (V) dividend yield of 0.79% is merely icing on the cake. Share price appreciation should do virtually all of the heavy lifting over the next six years.

One of the primary reasons Visa’s volatility clocks in below that of the S&P 500 is its predictable cyclical nature. Cyclical stocks tend to ebb and flow with the U.S. economy. Even though downturns are an inevitable part of the economic cycle, they don’t last very long. So Visa’s outperformance reflects that the U.S. and global economies spend a considerably longer amount of time expanding than contracting.

Something else working in Visa’s favor is its domestic and international opportunities. Within the U.S., it held the lion’s share of credit card network purchase volume (54%), as of 2020. In fact, it was the only one of the four major credit card networks in the U.S. to demonstrably expand its market share following the Great Recession.

As for its international prowess, Visa can benefit from the fact that most global transactions are still being conducted with cash. It will likely take decades to penetrate some of the most underbanked regions of the globe, which is a fancy way of saying that Visa has decades left to sustain a double-digit growth runway.

Also, as I’ve previously pointed out, Visa’s conservative operating approach is a positive. Its purposeful avoidance of lending means it isn’t exposed to potential loan losses when recessions arise. By strictly focusing on payment processing, Visa is ensuring that it bounces back from recessions faster than its peers, as well as maintaining a profit margin above 50%.

Berkshire Hathaway
The third extremely safe stock that can double your money by 2028 is none other than conglomerate Berkshire Hathaway (BRK.A) (BRK.B). Although Berkshire doesn’t pay a dividend, it continues the theme of the companies on this list offering lower volatility than the S&P 500.

While Berkshire Hathaway might not be a household name, its billionaire leader certainly is. Warren Buffett has been CEO of Berkshire since 1965, and in that time has overseen the creation of more than $620 billion in shareholder value. Perhaps more important, he’s delivered an average annual return of 20.1% for his shareholders. Even though past performance is no indication of future results, a 57-year track record is sufficient evidence that Buffett has a knack for outperforming the broader market. 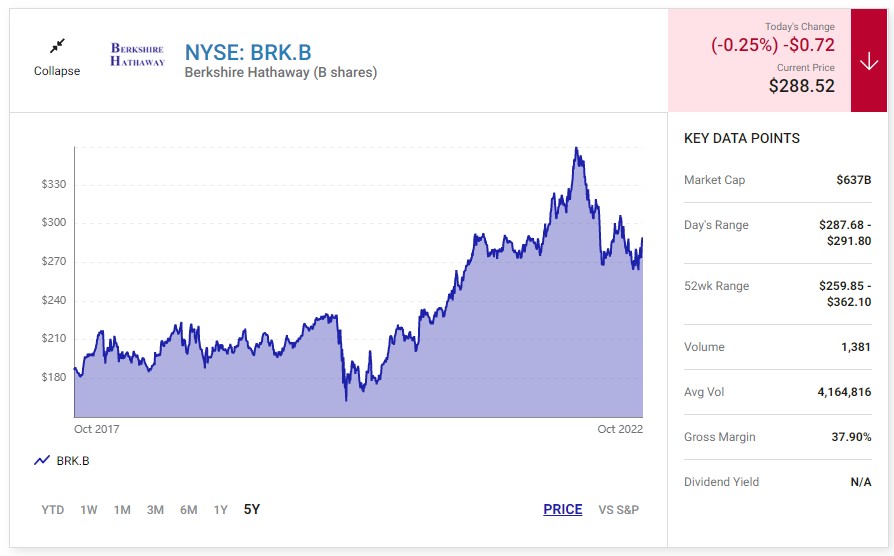 One of the most overlooked reasons for Berkshire Hathaway’s success is its investment portfolio, which is packed with dividend stocks. Companies that pay a regular dividend are usually profitable, and history shows they tend to vastly outperform stocks that don’t pay a dividend. Over the coming 12 months, Buffett’s company is on pace to collect more than $6 billion in dividend income.

Warren Buffett happens to be a big fan of leaning on cyclical business as well. Rather than trying to foolishly time when a recession will occur, the Oracle of Omaha has packed his company’s portfolio with businesses that’ll thrive from the natural expansion of the U.S. and global economies over time, such as bank stocks.

Berkshire Hathaway’s capital-return program is another reason for investors to be excited. Though Berkshire doesn’t pay a dividend, there isn’t a stock Buffett and his right-hand man Charlie Munger love buying more than shares of their own company. Over a four-year stretch, Buffett and Munger have repurchased $62.1 billion worth of Berkshire Hathaway Class A and Class B stock.

For businesses with steady or growing net income, stock repurchases can have a positive impact on earnings per share. This can make an already reasonably priced stock like Berkshire Hathaway appear all the more attractive.