Berkshire Hathaway’s (BRK.B) chief executive officer and chairman, Warren Buffett, knows quality companies when he sees them. Along with his insistence on paying a reasonable valuation for his investments, this has helped Berkshire Hathaway grow its investment portfolio’s value to a whopping $325.9 billion.

The company’s $33.7 million position in the consumer staple Mondelez International (MDLZ) is one of its smaller stakes. But don’t let that fool you: Mondelez is a blue-chip dividend stock that income investors with extra capital should strongly consider buying. Let’s delve into the company’s fundamentals and valuation to elaborate further. 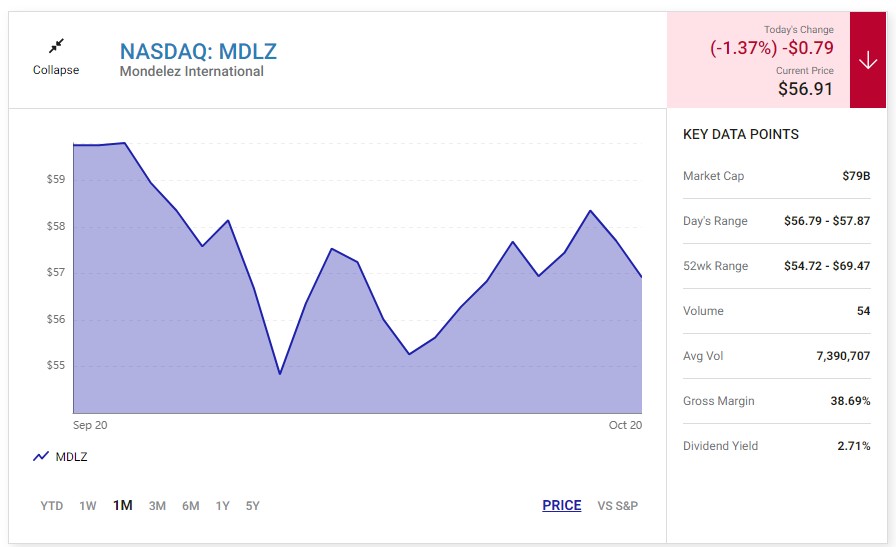 Iconic brands yield impressive earnings results
Consumers may not be familiar with Mondelez itself. But with brands such as Oreo cookies, Chips Ahoy! cookies, Ritz crackers, and Triscuit crackers, it’s a safe bet that most consumers have at least one of the company’s products in their homes right now. These brands explain how Mondelez’s market share in the biscuits category (i.e., cookies and crackers) is No. 1 in the world while it is second in the chocolate category.

The company logged $7.3 billion in net revenue during the second quarter that ended June 30. This was good enough for a 9.5% year-over-year growth rate. How did the large-cap consumer staple put up such solid net revenue growth for the quarter?

Mondelez’s organic net revenue surged 13.1% higher year over year in the quarter. The company passed 8% price hikes onto consumers during the quarter due to rising raw material and transportation costs. However, because Mondelez’s products are embedded in the daily routines of consumers, the company’s organic net revenue grew 5% from increased product volume. Consumers responded about as well to higher prices as Mondelez could have hoped, buying even more products from the company than during the year-ago quarter.

Mondelez sells its products in over 150 countries and converts local currencies back into U.S. dollars for financial reporting purposes. This explains how the company was harmed by a robust dollar in the second quarter, which is why net revenue growth lagged behind organic net revenue growth.

Mondelez generated $0.72 in currency-neutral non-GAAP (generally accepted accounting principles) diluted earnings per share (EPS) during the second quarter. This represented a 9.1% growth rate over the year-ago period. Mondelez’s larger net revenue base and a 1.9% reduction in its diluted outstanding share count to 1.4 billion shares were the two pieces of the puzzle that account for its constant currency-adjusted diluted EPS growth for the quarter.

As a result of the company’s strategic acquisitions like the high-growth well-being snack-bar brand Clif Bar, analysts are projecting 4.9% annual earnings growth over the next five years. For context, the acquisition of Clif Bar adds more than $1 billion to Mondelez’s annual sales from the start. And with more consumers seeking snacks to accommodate their active lifestyles, Clif Bar has room to grow both in the U.S. and internationally.

Respectable dividend growth should persist
Mondelez’s 2.6% dividend yield is meaningfully above the S&P 500 index’s 1.8% dividend yield. And the company also has the potential to continue handing out generous dividend raises to its shareholders similar to the most recent 10% hike announced in July.

This is because it’s forecasted that Mondelez’s dividend payout ratio will be a tad over 49% in 2022. That provides the company with the retained earnings required for bolt-on acquisitions and debt repayment to further strengthen the business. This is why I would be surprised to see any less than high-single-digit annual dividend growth from Mondelez over the next few years, which would be a nice pairing of starting income and future income.

The valuation is rational
Mondelez is a great company. And the financial markets don’t appear to have priced the stock beyond a sensible valuation.

Mondelez’s forward price-to-earnings (P/E) ratio of 19.9 is just a slight premium to the consumer staples sector forward P/E ratio of 19.2. That’s hardly an excessive valuation to pay for an above-average quality business, which is what makes Mondelez an intriguing choice for dividend growth investors.