A U.S. deal with China at any level would be the last thing anyone expects right now…

But it’s happening. And it could unleash a trillion-dollar boom in Chinese stocks.

On August 26, the Public Company Accounting Oversight Board (“PCAOB”) announced that it struck a deal with the China Securities Regulatory Commission and China’s Ministry of Finance to begin audits of Chinese companies listed in the U.S.

This is the first step in avoiding a wave of delistings… one that threatens to remove each and every Chinese stock currently trading on U.S. stock exchanges.

The news sent the Hang Seng Tech Index surging 6.8% in just two days. And while the initial euphoria has faded, the likely deal has huge implications for Chinese stocks listed in the U.S. through American depositary receipts (“ADRs”).

The deal effectively grants the PCAOB complete access to the audit working papers, audit personnel, and other information it would need to investigate any firm it chooses. No loopholes, no exceptions.

Today, I’ll share why it matters… and why it could set off a multiyear boom in Chinese stocks…

The PCAOB wasn’t expecting Beijing to agree, at least not this soon. And it’s the first step to resolving the threat of Chinese delistings from U.S. indexes.

PCAOB officials are already conducting their work in Hong Kong after arriving there last month. And if they stick with their plan, they’ll first start with two of China’s biggest companies: e-commerce giant Alibaba (BABA) and KFC restaurant operator Yum China (YUMC).

Now, we shouldn’t expect any upbeat comments from the U.S. Securities and Exchange Commission (“SEC”) or the PCAOB as long as the inspections are ongoing. The SEC is taking a hard line on these inspections… And it should – because better transparency will benefit all investors.

But I expect this will be a big win for most Chinese ADRs and their shareholders. There are two reasons why…

First, most U.S. investors don’t know this, but Hong Kong is home to one of the toughest regulatory environments for publicly traded companies. It has strict requirements for listing, including profitability for at least three years straight and matching audited financial statements.

In fact, many Chinese companies that can’t meet the listing requirements in Hong Kong choose to list on the Nasdaq Composite Index instead…

By making it easy to go public, the Nasdaq encourages companies to participate in the capital markets… And it makes it the issuer’s responsibility to follow the rules. In contrast, the Hong Kong Stock Exchange makes listings difficult on purpose to protect the investing public.

But since the U.S. began “blacklisting” Chinese firms, one Chinese company after another has gone through the monumental task of listing in Hong Kong… to make sure their investors won’t face delisting risk.

This tells us that – at least for Chinese companies that have additional listings in Hong Kong – PCAOB officials will likely find their audits clean and acceptable.

The ink was barely dry on the deal when the Hong Kong Financial Reporting Council (“FRC”) came out with a statement effectively promising the PCAOB would be able to carry out its task.

The FRC is the regulator of independent auditors in Hong Kong. It investigates hundreds of companies for auditing-related problems and wrongdoings.

In its statement, it said that it would “render all necessary assistance and make appropriate arrangements within its regulatory remit and powers… to support mutual cross-border collaboration.”

I doubt the Hong Kong FRC would risk its credibility if it didn’t know that the PCAOB would be able to get everything it needed, as outlined in the deal.

That’s a tall order. But the first two audits are underway, and the outcome of each will set the tone for the entire investigation process. The best part is that these companies have little to lose and everything to gain.

Just take a look at the chart below. It shows the weekly price of the iShares MSCI China Fund (MCHI), which is heavily composed of large-cap Chinese technology stocks that are listed in the U.S… 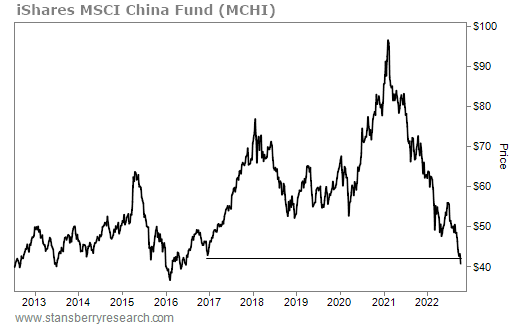 The negative sentiment surrounding Chinese equities is now so extreme that the MCHI is trading at the same level it was back at the beginning of 2017. That’s nearly six years of gains wiped out in less than two years.

If the investigation turns up problematic, or the PCAOB says it isn’t getting what it needs to do its job, the shares could fall slightly in the short term. But if the PCAOB can complete its job and walk away with an acceptable finding on the audits, there will be major fireworks.

And since Yum China and Alibaba are both large companies, any good news could lead to a major rally in Chinese stocks… one that will likely last for years to come.