Buying and holding great companies for the long run is a tried and tested way of building one’s wealth in the stock market. Such a strategy allows investors to gain from emerging opportunities and benefit from the power of compounding.

For instance, a $100,000 investment in Microsoft (MSFT) stock a decade ago would be worth close to $1 million now, assuming the dividends were reinvested. A similar investment in Amazon (AMZN) 10 years ago would now be worth just above $900,000 now. And all these impressive returns have been generated in the past decade, despite the ups and downs in the stock market.

So investors who want to retire in the next decade and have $100,000 to invest right now may want to take a closer look at Twilio (TWLO), Qualcomm (QCOM), and CrowdStrike Holdings (CRWD), three companies that are on track to take advantage of massive opportunities that could send their stocks soaring and help investors retire as millionaires. Let’s see how.

1. Twilio
Twilio stock has been on a roller-coaster ride since making its debut on the market six years ago. Shares of the cloud communications specialist jumped 15x by the beginning of 2021 when compared to its IPO (initial public offering) price. But the stock has seen a severe sell-off since then and is now available at a tempting valuation. 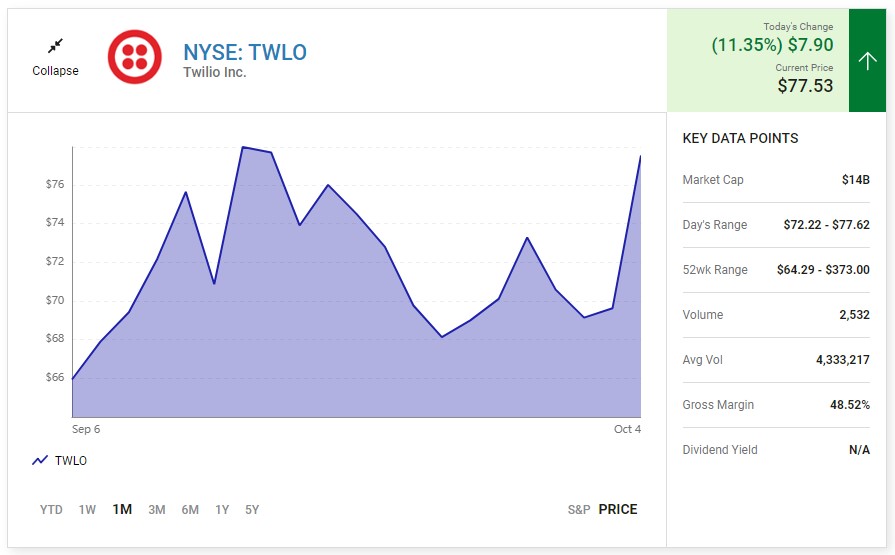 Twilio stock trades at 3.7 times sales, a far cry from its five-year average of 16.7. It is worth noting that Twilio was trading at as high as 31 times sales in 2020 when the pandemic sent its sales and stock soaring. The cloud communications specialist has sustained its impressive growth in a post-pandemic world by attracting more customers and encouraging them to spend more on its offerings.

This is evident from the 41% year-over-year spike in the company’s Q2 revenue to $943 million. Organic growth, excluding the impact of acquisitions, stood at 33% over the prior-year period. What’s more, Twilio’s Q3 guidance was also solid, as it expects revenue to increase 31% this quarter at the midpoint of its guidance range.

But what’s more impressive is the long-term growth that analysts expect from Twilio. The company’s earnings are forecast to increase at a whopping 155% over the next five years, which would be a big departure from the annual earnings growth rate of negative 14% seen in the past five years.

It isn’t surprising to see why Wall Street is so upbeat about Twilio’s prospects. The cloud-based contact center market that Twilio operates in is anticipated to clock annual growth of 21% through 2030, generating an annual revenue of $82 billion at the end of the forecast period. This space generated $14.5 billion in revenue last year, which makes Twilio one of the best ways to play this opportunity. That’s because Twilio’s 2021 revenue of $2.84 billion suggests that it controlled nearly 20% of this fast-growing segment.

Twilio has already shown us in the past that it can generate huge returns for investors. The company’s prospects indicate that it could become a multibagger once again in the future thanks to an acceleration in its bottom line and consistent growth in the top line, so don’t be surprised to see this cloud stock turn a $100,000 investment into $1 million over the next decade.

2. Qualcomm
A $100,000 investment in Qualcomm a decade ago would now be worth just over $251,000, but don’t be surprised to see the chipmaker deliver bigger returns over the next 10 years. That’s because Qualcomm now has more catalysts to take advantage of in the form of the automotive and Internet of Things (IoT) markets, in addition to the smartphone space, which has been a big growth driver for the company over the years. 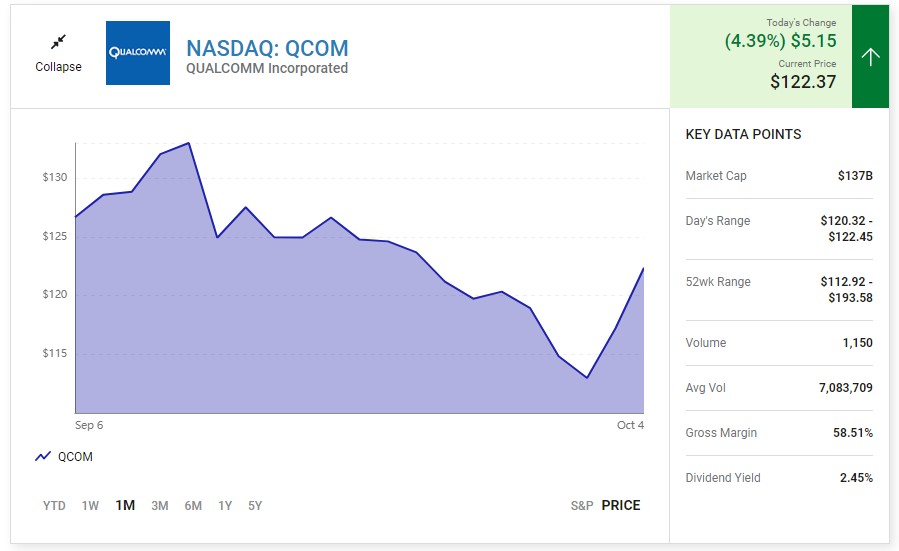 Automotive alone presents a massive opportunity for Qualcomm, as it built a design win pipeline worth $30 billion in this market. In September last year, the company was estimating an automotive design win pipeline worth just $13 billion, indicating the rapid growth in this segment. Qualcomm now expects its automotive revenue to hit an annual run rate of $9 billion by fiscal 2031, compared to fiscal 2022’s estimate of $1.3 billion.

At its 2021 investor day held in November last year, Qualcomm pointed out that its addressable opportunity could be worth $700 billion in the future, compared to $100 billion in 2021. Qualcomm seems well placed to tap into this huge opportunity thanks to its relationships with major players across key industries.

The company’s Snapdragon smartphone processors, for instance, are used by leading OEMs (original equipment manufacturers) across the globe. It controlled 29% of the global smartphone application processor market in the second quarter of 2022, up from 26% in the prior-year period. All this indicates that it wouldn’t be surprising to see Qualcomm’s earnings grow at a faster annual rate in the future as compared to the 28% compound annual growth rate (CAGR) seen in the last five.

The semiconductor bellwether’s faster growth could translate into stronger gains on the stock market, and that could make it an ideal bet for investors looking for a multibagger stock that could help them become millionaires in the next decade.

3. CrowdStrike Holdings
Cybersecurity specialist CrowdStrike went public just over three years ago, and it has been a big winner on the stock market since then. Shares of the company surged over 180% since its initial public offering (IPO), and it wouldn’t be surprising to see it sustain its terrific momentum over the next decade as well given the niche it operates in. 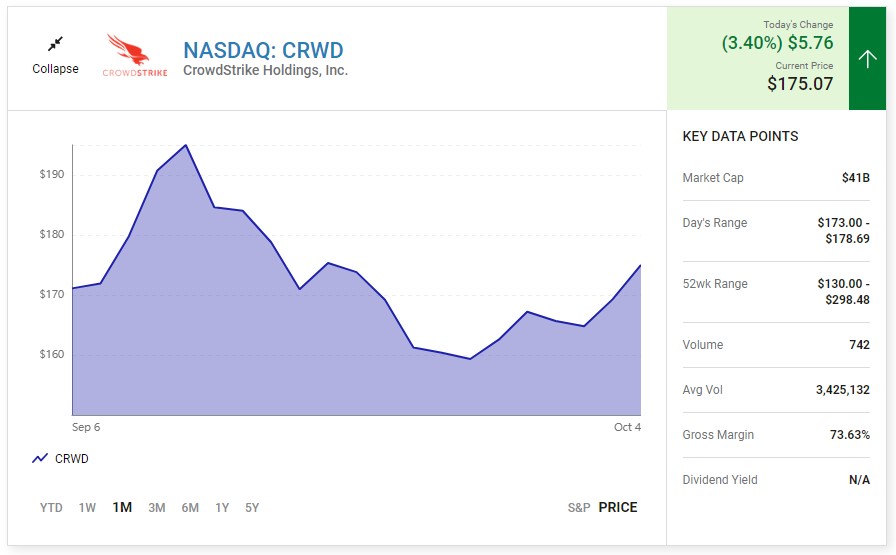 CrowdStrike is working to take advantage of this huge opportunity. The company’s fiscal 2023 second-quarter revenue (for the three months ended July 31) was up 58% year over year to $535 million. More importantly, the cybersecurity company is building a sustainable stream of revenue. This is evident from its annual recurring revenue (ARR) of $2.14 billion last quarter, which was a 59% jump over the prior-year period.

CrowdStrike’s fast-growing subscriber base, the jump in customer spending, and the prospects of the market that it operates in tell us why the company’s earnings are expected to increase at a 73% CAGR over the next five years. Such rapid growth could translate into big gains on the stock market as well, and CrowdStrike could make investors wealthier over the next decade, just like it has done since its IPO.

That’s why investors looking to buy a cybersecurity stock that could supercharge their portfolios may want to buy CrowdStrike, as it is trading at 20 times sales right now, a discount to its 2021 price-to-sales ratio of 36.