“I sold out of everything a couple months back,” my uncle told me. “I couldn’t take the pain anymore. I was losing more and more money each day.”

He wasn’t asking me for advice. After all, this was the summer of 2009 – when I was still in college.

He just needed to get what had happened off his chest. And it imprinted a memory in my mind that I can still see all these years later…

My uncle had watched roughly half his net worth vanish. Millions of dollars, earned over decades of running a successful small business – just gone.

He still had plenty of savings left. So while the losses stung (of course they did… even if they wouldn’t put him out on the street), his tone made it clear that they were far from the worst of the pain he was feeling.

The worst part was feeling completely lost… not knowing what to do… and feeling so betrayed by the system that he’d never feel safe to invest again.

That fear stuck with him. He sold near the bottom. And he never got back into stocks, not in any meaningful way. He missed out as stocks rallied from the 2009 trough and staged an incredible decadelong bull market.

That’s the real danger during a bear market. It’s not just the losses. It’s the fear that takes over – and the long-term inaction that results.

Stocks are crashing once again. But if you don’t have a plan for the rocky road ahead, you’re nearly certain to miss the boom that will follow…

The scars of 2008 stuck with thousands of investors.

Money-market funds – basically cash in brokerage accounts – soared to an all-time high in 2008. They rose by roughly $2 trillion in just a couple years. Yet, after the crisis passed, most of that money never moved back into the market. Take a look… 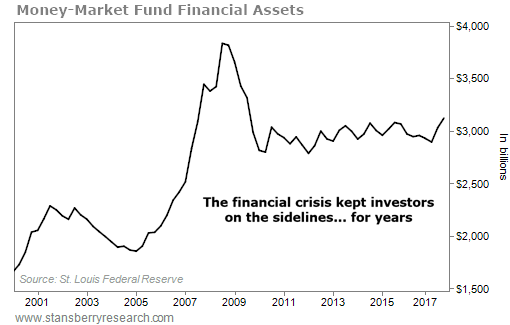 The 2008 bust spooked $1 trillion out of stocks… And most of it never returned.

The worst part is that it was the little guys – folks like my uncle – who paid that price. Those mom-and-pop investors missed out on the chance to repair their battered portfolios in the ensuing rally.

I hope that didn’t happen to you. But even if it did, it doesn’t have to happen again.

The key to surviving this bear market is having a plan. You might feel paralyzed today. And you might be ready to sell everything just to avoid more pain.

If that’s the case, go ahead. But before you make a big, emotional move in your portfolio, you must have a specific plan for how and when you’ll get back into stocks.

Maybe you’ll watch the trend. Or maybe you’ll start buying again once the market hits a certain level… or once a certain economic indicator triggers.

The exact details aren’t important. The important part is that you understand exactly why and when you’ll act. This is your plan – the one you can and will follow.

Take some time to think about it. Write it down in a safe place. Just don’t do anything drastic until that plan is final.

Moving to higher ground is OK in the short term. But it’s not a long-term solution. And if doing it means you’ll never get back into the market, it’s the wrong bet to make.

Folks who make that mistake are the real losers of a bear market. Put your plan together today so that you won’t be one of them.