This year has served as a not-so-pleasant reminder that stocks don’t move up in a straight line — even if last year made the investment community believe that’s what happened. A combination of historically high inflation, an incredibly hawkish Federal Reserve, and back-to-back quarters of gross domestic product declines has sent all three major U.S. indexes plunging into a bear market.

While bear markets can be scary and produce some jaw-dropping volatility, they’re also known for creating once-in-a-generation buying opportunities for long-term investors. Throughout history, every double-digit stock market decline has eventually been erased by a bull-market rally.

Since all of the major indexes have plunged between 20% and 34%, the valuations of innovative growth stocks have become especially attractive. What follows are four trailblazing growth stocks with the capacity to turn a $100,000 initial investment into $1 million by 2040.

Upstart Holdings
The first game-changing stock with the ability to increase a $100,000 investment tenfold by 2040 is cloud-based lending platform Upstart Holdings (UPST). While there’s no question that a rapidly rising rate environment is going to increase loan delinquencies and test a company that’s not been through a true economic downturn before, there are clear competitive advantages Upstart can lean on.

The company’s biggest differentiator is its artificial intelligence (AI)-driven lending platform. For decades, banks and credit unions have been using the same costly and time-consuming process to vet loans. Upstart’s AI-based platform leans on machine learning to quickly vet loan applications. Nearly three-quarters of the company’s processed loans are vetted and approved digitally, which saves time and money for its roughly six dozen lending partners.

What’s perhaps even more interesting is that Upstart is giving a larger percentage of loan applicants an opportunity to prove themselves. Even though Upstart’s approved applicants have a lower average credit score than applicants approved through the traditional loan-vetting process, the delinquency rates have been similar between the two processes. In other words, Upstart is providing lending opportunities to people previously shut out of the credit market. In turn, it’s expanding the customer pool for banks and credit unions without worsening their credit-risk profile.

Something else to consider is that Upstart has only just begun expanding into sizable addressable markets. Since its inception, it’s primarily focused on vetting personal loans. But with the company now pushing into auto loan originations and small business loans, its addressable market has grown by a factor of 10. Patience should pay off handsomely for long-term investors of Upstart Holdings. 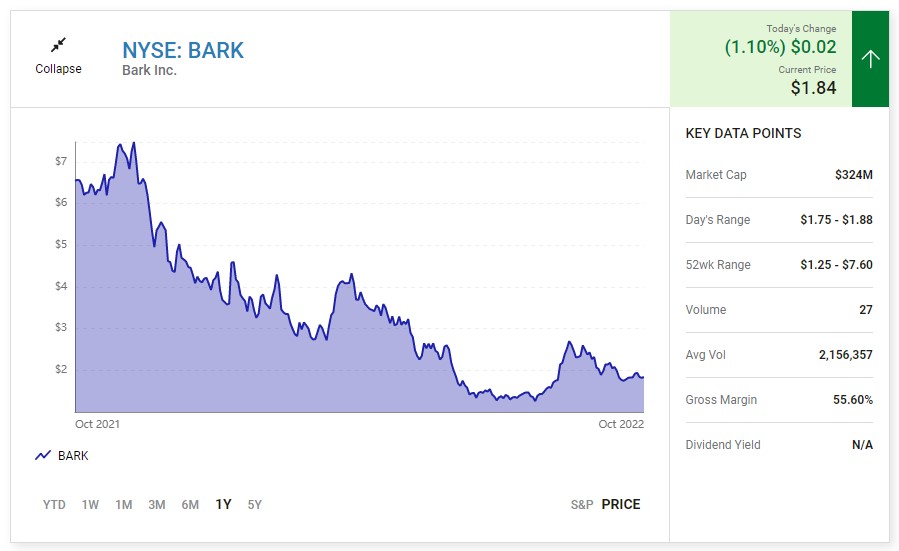 Bark
A second trailblazing stock that can turn $100,000 into $1 million over the next 18 years is dog-focused products and services company Bark (BARK). Although bear markets tend to weigh on money-losing growth stocks, Bark has no shortage of catalysts in its sails.

For instance, there are few industries on the planet that have proved more recession-resistant than the pet industry. Based on data from the American Pet Products Association, it’s been more than a quarter of a century since year-over-year spending on pets in the U.S. has declined. The dot-com bubble, Great Recession, and coronavirus crash were unsuccessful in keeping pet owners from opening up their wallets for their furry, gilled, feathered, and scaled family members.

On a more company-specific basis, Bark stands out for its direct-to-consumer approach. Though you can find its products in tens of thousands of retail stores, approximately 90% of its sales are derived from online subscriptions. Not only are online subscribers a source of predictable operating cash flow for the company, but an online-driven approach helps to reduce inventory expenses and should bolster gross margins.

The other exciting aspect for Bark is its innovation. During the pandemic, it introduced Bark Home, which provides basic necessities like bowls, collars, and leashes, Bark Bright, a service for canine dental products, and Bark Eats, which works with owners to develop breed-specific dry food diets. These add-on sale opportunities are what’ll really allow Bark to shine over the coming years.

PubMatic
The third genius growth stock that has the tools to grow a $100,000 investment into a cool $1 million by 2040 is cloud-based programmatic adtech stock PubMatic (PUBM). Even though economic weakness has a tendency to hit advertising spending hard, the long-term prospects for PubMatic are brighter than ever.

What helps set this company apart from its competition is that it’s a sell-side provider (SSP). This is a fancy way of saying that PubMatic helps publishing companies sell their digital display space to advertising companies. Effectively, PubMatic uses its machine-learning software to place relevant ads in front of users to keep both publishers and advertisers happy. Because there’s been quite a bit of consolidation within the SSP space, there aren’t too many options aside from PubMatic.

To build on the above, PubMatic finds itself at the center of the digital ad revolution. It’s no secret that ad dollars are shifting from print to mobile, video, and over-the-top programmatic ad channels. While the digital ad industry is expected to grow by an annual average of 14% through the midpoint of the decade, PubMatic’s organic growth rate has regularly come in between 25% and 50%.

But what’s arguably the most overlooked yet important aspect of PubMatic’s operating model is its cloud-based infrastructure. Whereas some of its competitors have chosen to rely on a third-party provider, PubMatic designed and built its own platform. As the company’s sales climb, the end result should be superior operating margins, relative to its peers. 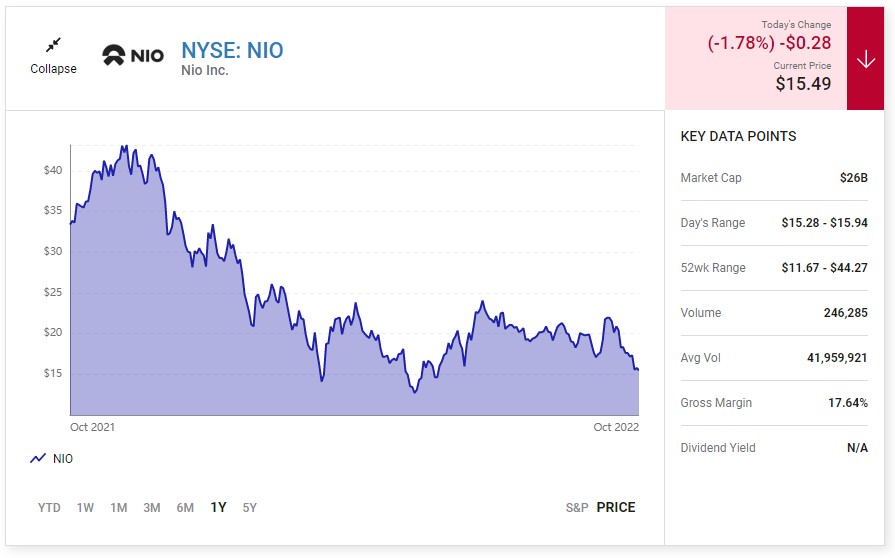 Nio
The fourth and final trailblazing growth stock that can turn $100,000 into $1 million by 2040 is China-based electric vehicle (EV) manufacturer Nio (NIO). Despite auto stocks contending with supply chain headaches galore at the moment, Nio has what looks to be a clear path to profits and relevance in the EV industry.

From a macro perspective, EVs offer a no-brainer growth opportunity. Most developed countries want to reduce their respective carbon footprints, and promoting the transition to cleaner-energy vehicles is an easy way to do that. EV manufacturers like Nio should enjoy a multidecade vehicle replacement cycle. Once supply chain issues subside, it wouldn’t be surprising to see Nio ramp production to 50,000 EVs a month within about a year. For context, Nio is currently producing a little over 10,000 EVs a month.

But within the EV space, innovation is paramount — and Nio is certainly not lacking in this department. This is a company that’s brought at least one new EV to market each year. Impressively, the top-tier battery upgrade for its recently introduced ET7 and ET5 sedans blows key competitors (ahem, Tesla) out of the water when it comes to driving range.

Unconventional innovation is playing a role, too. During the pandemic, Nio unveiled its battery-as-a-service (BaaS) subscription. Enrollment in BaaS lowers the initial purchase price of its EVs, and allows owners to charge, swap, and upgrade their batteries. In return for giving up low-margin revenue on the initial sale of its EVs, Nio generates high-margin recurring revenue, and — most importantly — locks in the loyalty of early buyers. The BaaS subscription is a genius tool that should establish Nio as a key player in China’s still-nascent EV industry.