The Dow Jones industrial Average (^DJI) officially entered a bear market earlier this week, as it closed more than 20% below the record levels it hit early in January 2022. Other major benchmarks had seen even larger losses, but it took the most recent downturn in the stock market to pull the venerable Dow along with them.

As you’d expect from a downturn, some of the 30 stocks of the Dow Jones Industrials have taken harder hits than others. Indeed, there are still a handful of stocks that are up on the year. However, there are many more Dow stocks that are down 30% or more — and two, in particular, are trading at multiyear lows, despite having extremely attractive dividend yields. Below, we’ll look at that pair of companies to see whether they’re poised to rebound or likely to keep struggling.

1. 3M
Industrial conglomerate 3M (MMM) has seen its stock fall 37% so far in 2022. That has boosted its dividend yield by 2 full percentage points since the beginning of the year, with its current yield weighing in at 5.3%.

3M has had to deal with the same macroeconomic headwinds that other Dow stocks have faced, with sales falling 3% in its most recent quarter, compared to year-earlier levels, and adjusted earnings declining nearly 10%. Yet the risk that stands out more than any other stems from potential legal liability on multiple fronts.

Users of military-grade earplugs have argued that products from a company that 3M acquired failed to prevent hearing problems, affecting hundreds of thousands of people. Meanwhile, controversy over the effectiveness of 3M’s respirators could also result in costly litigation. 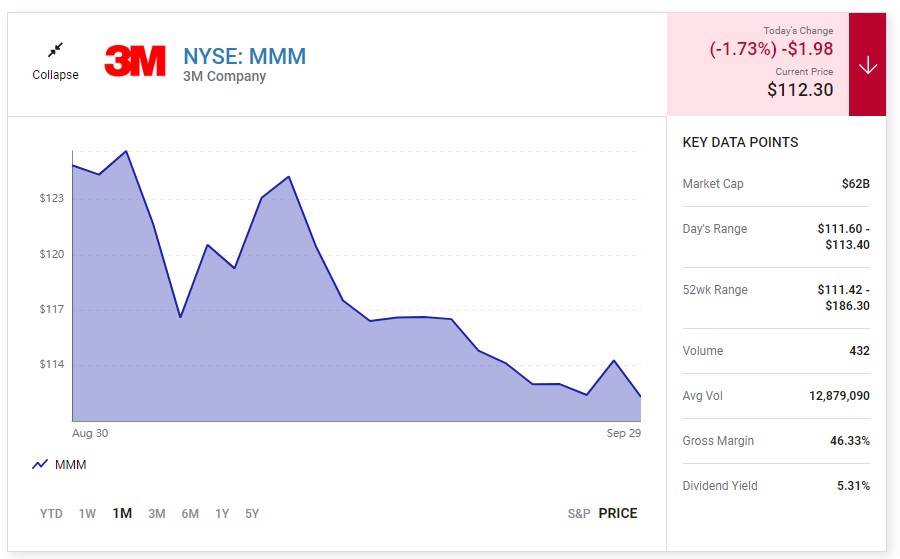 Those issues are affecting 3M’s efforts to make strategic business shifts. The conglomerate wants to spin off its healthcare business, leaving its legacy business to keep serving consumers, the electronics and transportation industries, and the safety needs of manufacturing clients worldwide. Yet plaintiffs want to ensure they can make claims against all of 3M’s current assets.

The last time 3M shares were this low was in 2013. While revenue has grown incrementally in the ensuing nine years, 3M’s net income is actually lower. That doesn’t bode well for the conglomerate’s future efforts, although it does justify why it’s working so hard to unlock value from its highest-performing business segments.

2. Intel
Semiconductor-pioneer Intel (INTC) has dealt with tough times for a while. It’s the poorest performer in the entire Dow so far in 2022, losing nearly half of its value. That has doubled the tech-stock’s dividend yield to more than 5.4%.

Intel’s recent financial performance explains why its stock has done so poorly. Revenue fell 17% year over year in the second quarter of 2022, sending earnings per share down nearly 80%. Weakness in PC demand and reduced client spending on data centers offset higher sales of network and edge-computing products. 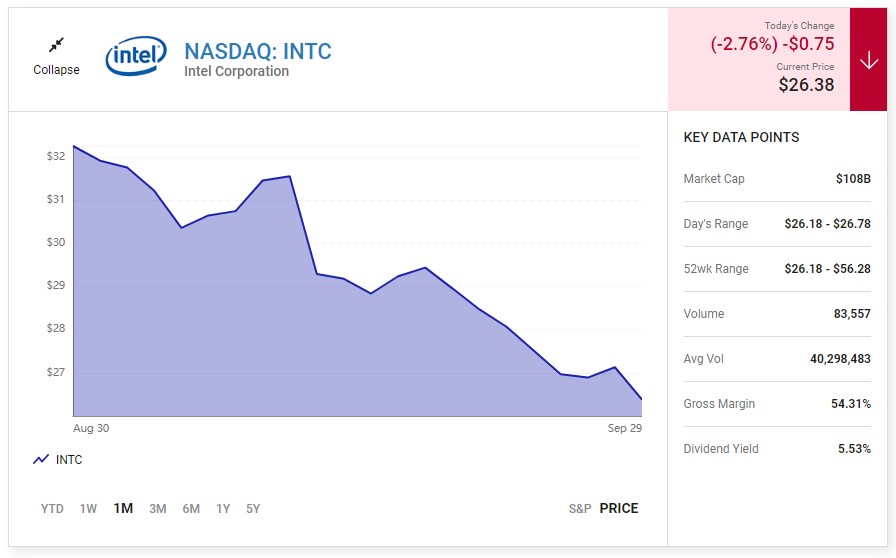 More broadly, Intel has lost its first-mover edge in semiconductors, with Nvidia having usurped its place as industry leader. Even Advanced Micro Devices has found viable niche advantages.

Yet Intel’s also fighting back, tapping capital from Brookfield Infrastructure to help it build new fabrication facilities. If that’s successful, then Intel might finally start to win back market share and get back on the cutting edge of chip technology.

Intel shares haven’t been this low since 2014, but both revenue and earnings have made sizable gains since then, including a near-doubling on the bottom line. That suggests that between these two stocks, Intel has the better chance of eventually rebounding once the Dow’s bear market gives way to more favorable business conditions.