Today we’re going to “onshore” ourselves 2 unsung dividend payers that are pumping out cash: one has seen its cash flow surge 367% in just the last three years—feeding a quick “dividend double” for its shareholders.

Both of these payouts have plenty of room to grow from here, thanks to today’s biggest—and least discussed—megatrend.

I’ll share the tickers on these two stealth dividend plays in a second.

As for the megatrend, the hint was in the first line: most people haven’t noticed, but American multinationals are “onshoring”—or bringing manufacturing back to the USA—in droves. This shift will only accelerate in the years ahead, and will make folks who buy the right stocks now some very big profits (and dividends!) indeed.

Onshoring—It’s for Real This Time

I know. I know. We’ve heard about the return of American manufacturing for the better part of 20 years. But it’s really happening!

Just last week, Intel (INTC), said it would invest $20 billion, and possibly up to $100 billion, to build what could become the world’s biggest chipmaking plant … in Ohio.

That would have been unheard of pre-COVID, when chips were, almost by default, made in China or Taiwan.

Intel is far from alone: Eli Lilly (LLY) recently said it would drop $2.1 billion on two new plants in Indiana; and PepsiCo (PEP) said in July it would open a 1.2-million-square-foot facility in Denver.

Foreign firms are right behind, deciding to build more stuff in the US and cut out the supply chain “middleman”: Japan’s Panasonic Energy recently said it would open a $4-billion EV-battery plant in Kansas City. And Denmark’s LEGO Group announced in June that it would build a new $1-billion plant in Virginia.

It’s easy to see why Intel and other household names are shifting their manufacturing here, as overstuffed ports, China’s insane COVID policies and the war in Ukraine make producing overseas less, um, appealing.

Then there’s the strong greenback, or as I call it, the “dollar bulldozer,” which “bulldozes” corporate profits by cutting the value of sales made abroad. The buck took a breather in mid-July. But it’s ticking higher again, which is one reason why the market—which, after all, is a gauge of corporate profits—has stumbled lately.

Midcap Dividend Growers: the Best Way to Play the US Manufacturing Boom

The best way to play the onshoring trend is midcap stocks, or those with market caps between $2 billion and $10 billion.

They’re our best onshoring buys because they’re just a bit off the radar, so we can pick them up cheaper than their large-cap cousins, but they’re still plenty liquid, unlike some small caps. Even better, most midcaps are domestic-based and serve a US audience—including the workers who will be snapping up jobs at these new plants, as well as these facilities’ domestic suppliers.

Casey’s General Stores (CASY) isn’t going to make any yield-hunter’s heart sing at first glance: its 0.7% current yield barely registers. But the convenience-store chain, which runs 2,400 outlets peddling gas and freshly prepared food, has some other dividend stats that are very appealing indeed:

The stock isn’t “cheap” at 21.5-times forward earnings, but that’s right around the 5-year average. More important, Casey’s has “relative strength,” being one of a handful of firms that’s actually posted positive returns this year:

Casey’s Gains in a Wretched Year 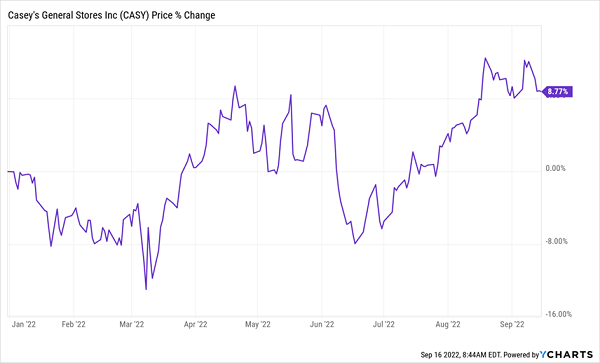 We love stocks with momentum in tough times like these, simply because those companies tend to stay strong over time. And management always has the option to drop a big dividend hike—or a special dividend—if it wants to catch the crowd’s attention!

What we really like about Casey’s, though, is its locations: it operates in the central and midwestern US, in states like Ohio, Michigan, Indiana, Kentucky and Tennessee, where many new plants are going. That will drive Casey’s sales, FCF and dividends for years to come.

Arizona-based Carlisle Companies (CSL) is another midcap with a ton of space to lift its dividend: it pays out just 36% of FCF as dividends as I write this, well below my 50% line.

The company is generous already: the dividend has doubled in just the past five years, including a monstrous 38% payout hike paid out on September 1: 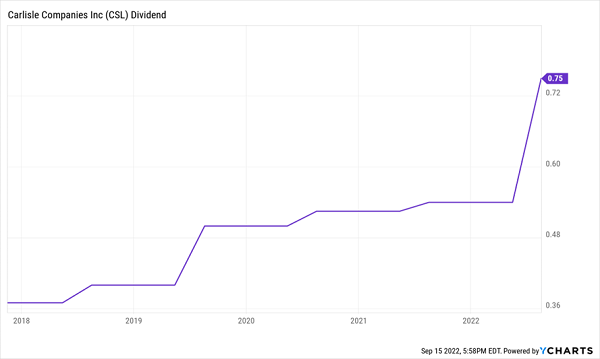 In all, payouts have risen for 46 straight years—and Carlisle is lined up for many more yearly hikes to come.

The company sells engineered components, including roofing, insulation and waterproofing materials, to the construction, aerospace and automotive industries, among others. That makes it a direct beneficiary of the Inflation Reduction Act’s billions in new funding to make buildings more efficient.

But it’s already on a roll, thanks to the construction and renovation boom in the last two years: in the latest quarter, revenue soared 57%, while earnings jumped 185%. Despite those gains, investors still haven’t caught on, giving us a chance to grab this one at just 15-times forward earnings. Cheap!

Carlisle and Casey’s cover you in two ways as more manufacturing returns to America’s shores: Casey’s profits as the former Rust Belt states revive to become the world’s next silicon hub, putting thousands of people to work in the process.

Carlisle? It profits by supplying the new plants—and roofing insulation and other materials for the homes that will be needed as these areas’ populations grow.

These two are far from alone when it comes to profiting from the collapse of globalization. I’ve got 7 more stocks that are also in the catbird seat. These companies are rock solid—so much so that I’m calling for at least 15% average annual returns over the next five years (or less!), which is enough to double your money. I expect these 7 cash machines to triple their dividends, too!

These 7 stocks are the answer to the volatility we’re facing today, and prime buys as “deglobalization” takes hold. Don’t miss your chance to buy them while they’re cheap. Click here and I’ll give you a Special Report with all the details, including these 7 stocks’ names, tickers, dividend histories and more.