It’s been a year to remember, but in all the wrong ways. The S&P 500, which is often viewed as the best barometer of stock market health, delivered its worst first-half return since Richard Nixon was president. To boot, the technology-dependent Nasdaq Composite, which has been largely responsible for lifting the market to new highs over the past year, has firmly plunged into a bear market.

While periods of heightened volatility and uncertainty are unnerving for all walks of investors, it can be an especially trying time for retirees. Folks who’ve hung up their work coats for good may not have the ability to deal with significant drawdowns in their principal investment.

But there’s a silver lining amid this turmoil for retirees. Bear markets have a rich history of rolling out the red carpet for patient investors — young and old alike. Every single double-digit percentage decline in the major U.S. indexes throughout history has eventually been cleared away by a bull market rally. In other words, every bear market is a bona fide buying opportunity.

Best of all, retirees don’t have to chase highly volatile growth stocks to generate significant returns. A number of rock-solid and reasonably low-volatility companies are ripe for the picking right now by aged investors. What follows are three perfect stocks for retirees that can turn $300,000 into $1 million by 2030.

Admittedly, the idea of investing in an oil stock might not sound palatable to retirees. Oil and natural gas demand fell off a cliff during the initial stages of the pandemic, which sent West Texas Intermediate crude oil futures plunging (very briefly) to negative $40/barrel. Such historic volatility is likely still fresh in the minds of retired investors. 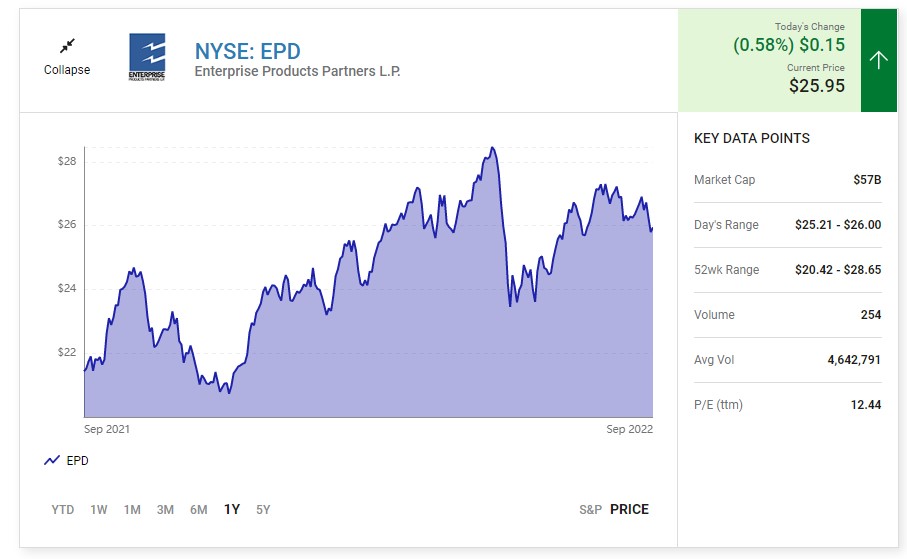 However, Enterprise Products Partners is a completely different beast and was virtually unaffected (on an operating basis) by the pandemic. That’s because it’s a midstream energy company. Midstream providers are effectively energy middlemen that help crude oil and natural gas get from the drilling grounds to storage tanks or processing plants. In Enterprise Product Partners’ case, it owns over 50,000 miles of transmission pipeline, 14 billion cubic feet of natural gas storage space, 19 deepwater docks, and 24 natural gas processing facilities.

The beauty of midstream energy companies is that virtually all use fixed-fee or volume-based contracts. Structuring contracts this way removes the volatility associated with oil and natural gas price swings and makes Enterprise Products’ operating cash flow highly predictable. This cash flow predictability is important, as it allows the company to outlay capital for infrastructure projects and acquisitions without adversely impacting its quarterly distribution (i.e., dividend) or profitability.

Additionally, Enterprise Products Partners’ distribution coverage ratio (DCR) never dipped below 1.6 during the worst of the COVID-19 pandemic. The DCR is the amount of distributable cash flow from operations relative to what was actually paid to shareholders. A figure at or below 1 would signal an unsustainable payout.

The icing on the cake? The company has increased its base annual distribution in each of the past 24 years and is currently parsing out a completely sustainable 7.1% yield. 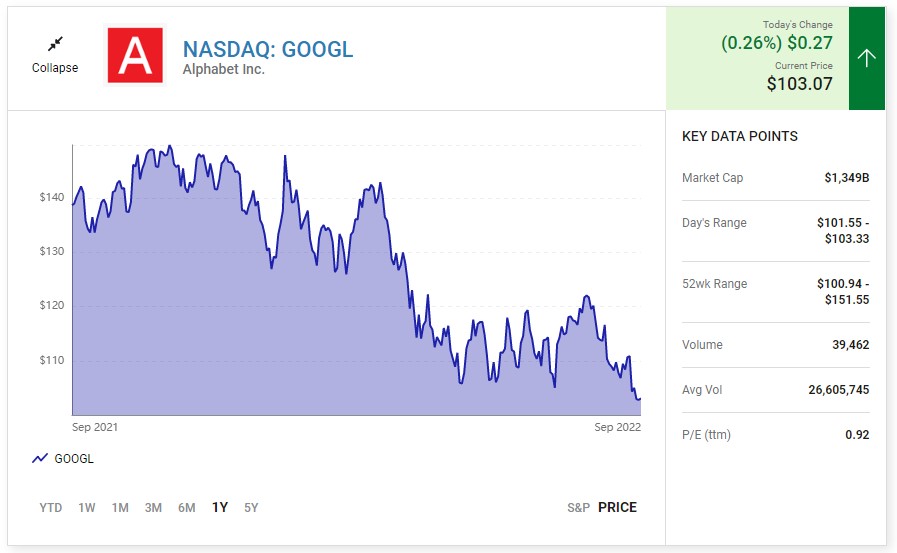 Alphabet
A second perfect stock for retirees to buy that can turn a $300,000 initial investment into $1 million in eight years is FAANG stock Alphabet (GOOGL) (GOOG), the parent company of internet search engine Google, streaming platform YouTube, and autonomous vehicle company Waymo, among others.

Alphabet is a great example for retirees that dividends aren’t necessary to grow your nest egg. While dividend stocks are typically mature, time-tested businesses with generally low volatility, retirees can get low volatility and considerably juicier growth prospects from a company like Alphabet.

Alphabet’s foundation has long been its internet search engine, Google. Looking back multiple years, data from GlobalStats shows that Google has controlled between 91% and 93% of worldwide internet search share. With an 88-percentage-point lead over its next-closest competitor, Google has become a veritable monopoly, and is therefore able to command strong pricing power when placing ads. This competitive advantage (i.e., cash cow operating segment) isn’t going anyway anytime soon.

But what’s been really exciting is watching Alphabet put its incredible cash flow from Google to work in other fast-growing arenas. For instance, YouTube has become the second most-visited social media site on the planet, with 2.48 billion monthly active users. With so many eyeballs watching videos, YouTube has delivered solid subscription growth, and is pacing nearly $30 billion in annual run-rate revenue from ads.

Alphabet’s investments in Google Cloud should begin paying dividends sooner than later as well. Though we’re still in the very early innings of cloud-service growth, Google Cloud has snatched up 8% of global cloud spending, according to a second-quarter report by Canalys. Although this is a money-losing segment for the moment, the high margins associated with cloud services should play a role in helping Alphabet double its operating cash flow over the next four years.

In case these competitive advantages aren’t enough, consider that Alphabet is cheaper now than it’s ever been as a publicly traded company — a forward-year price-to-earnings multiple of less than 18. It’s rare that investors can find such a high-quality company with such a reasonably low earnings multiple.

Visa
The third perfect stock for retirees that can turn an initial investment of $300,000 into $1 million by 2030 is payment processor Visa (V).

The big concern Wall Street has right now with payment processors is how they’ll perform with inflation hitting four-decade highs and U.S. gross domestic product (GDP) declining in back-to-back quarters. Because financial stocks like Visa are cyclical, they’re prone to weakness during contractions and recessions.

However, the economic cycle is a two-sided coin that very much favors the optimist. Although recessions are inevitable, they tend to last for no more than a couple of quarters. By comparison, virtually every economic expansion has been measured in years. A bet on Visa is simply a bet that U.S. and global GDP, and therefore consumer and enterprise spending, will increase over time (which is a virtual guarantee). 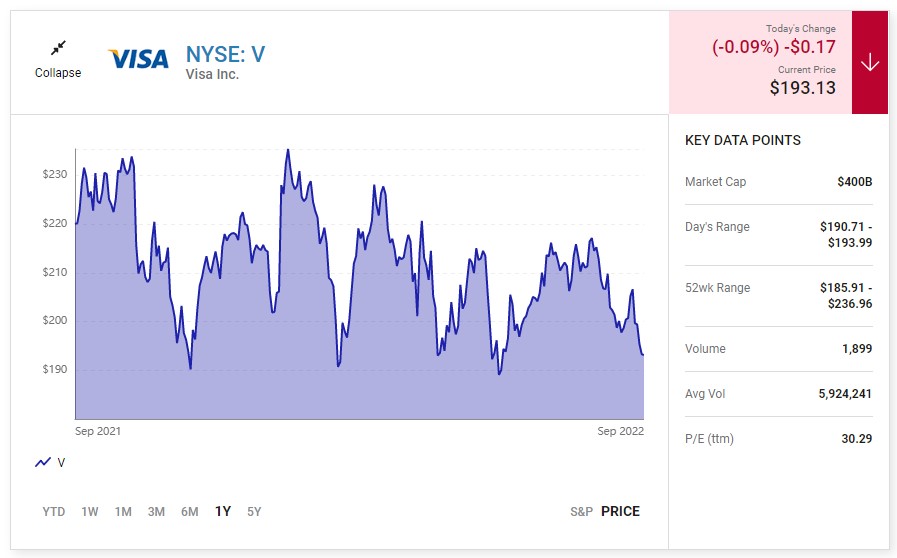 To add to the above, this is a company with plenty of opportunity beyond the borders of the U.S. Since most global transactions are still being conducted with cash, Visa can choose to organically expand its payment infrastructure into underbanked regions of the world, or make acquisitions to broaden its presence, such as it did with the Visa Europe buyout in 2016.

But the real secret sauce to Visa’s success might just be management’s financial discipline. Visa strictly acts as a payment processor and doesn’t lend. Though it could very easily generate interest income and fees as a lender, doing so would expose it to potential loan losses during recessions and require it to set aside capital to cover said loan losses. Since Visa doesn’t lend, it’s not required to take these protective measures, and therefore bounces back from recessions much faster than other financial stocks.

Finally, keep in mind that while Visa’s 0.75% dividend yield isn’t much to look at on a nominal basis, the company has increased its quarterly payout by more than 1,300% since doling out its first quarterly dividend in 2008.