Through reliable, rising profits, of course. High-quality dividend growth stocks are like the golden geese laying ever-more golden eggs. And if you were in the market for a golden goose, why wouldn’t you want to pay a much lower price for it?

The great thing about stock pricing is that, all else equal, lower prices result in higher yields. That means more passive dividend income on the same invested dollar.

If your goal, like mine, is to live off of safe, growing dividends, this gets you to the promised land that much faster.

Today, I want to tell you about 5  dividend growth stocks that are down more than 20% from their recent highs.

Through their four main segments – Nutrition, Diagnostics, Medical Devices, and Established Pharmaceuticals – this company is exposed to just about every area of healthcare you’d want to be exposed to. And that’s a good thing, because healthcare, broadly, is in secular growth mode.

Our global population continues to expand. People continue to live longer. And worldwide wealth is, on average, rising. All of that is a straight line to growing demand for quality healthcare, as well as a growing dividend for Abbott Laboratories.

The healthcare company has increased its dividend for nine consecutive years. Now, this one is a bit of a weird one. That’s because Abbott Laboratories is actually a Dividend Aristocrat. See, their track record for paying a safe, growing dividend dates back decades.

However, they spun-off biopharmaceutical firm AbbVie Inc. (ABBV) in 2013, which affected the dividend from legacy Abbott Laboratories. 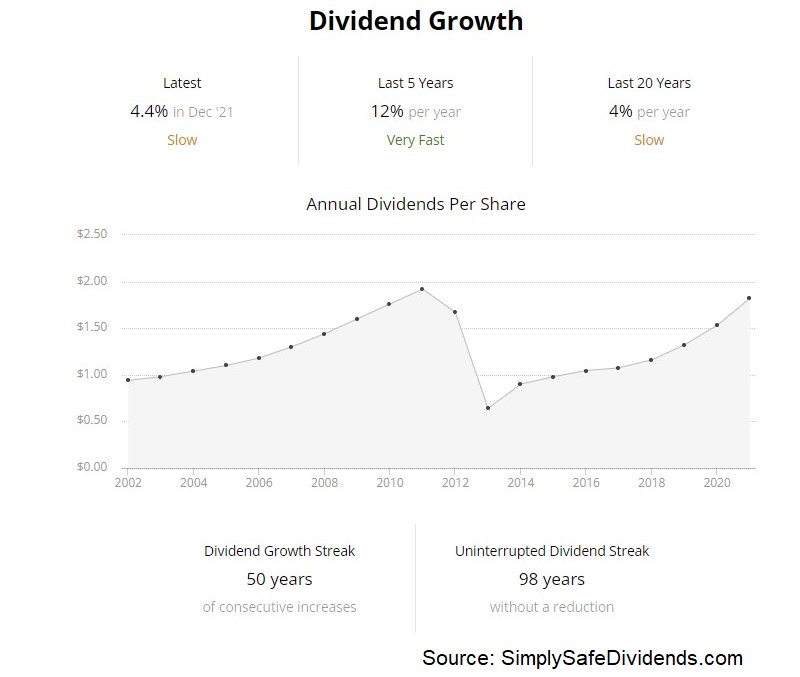 Bottom line? This company’s pedigree for dividend growth is second to none. The five-year dividend growth rate of 11.9% is further evidence of that. On the other hand, because this company’s quality has often bid up the stock’s pricing, forcing the yield lower, the yield is only at 1.7%. That said, this is 20 basis points higher than its own five-year average. And with a payout ratio of 39.2%, this dividend is set to prosper and grow for years to come.

This high-quality Dividend Aristocrat is down 24% from its 52-week high. Its 52-week high is $142.60. The current pricing of about $108 is not even close to that. Abbott Laboratories is rarely cheap.

In fact, I wouldn’t even call it cheap right now. I mean, we’re looking at a P/E ratio of 22.5 and a P/CF ratio of 18.8. These are not terribly low numbers in absolute terms. Then again, the stock’s five-year average P/CF ratio is 23.1.

The thing is, this is usually a rather expensive stock. And I’d say it’s drifted into a territory that is more acceptable and reasonable. Could it get cheaper? Sure. But there’s also a chance that it springs back into that premium territory it’s accustomed to. Take a look at it.

The second stock I want to bring to your attention is Caterpillar Inc. (CAT). Caterpillar is a heavy machinery company with a market cap of $100 billion. The strong keep getting stronger. And winners keep winning. All of that applies to Caterpillar.

Whenever and wherever there’s a major construction, mining, or energy project, Caterpillar’s big yellow machines aren’t far away. And this presence is only set to become more prevalent, as Caterpillar is almost certainly going to be a major beneficiary of the $1.2 trillion Infrastructure Investment and Jobs Act. What does that mean? More revenue and profit. And a higher dividend. 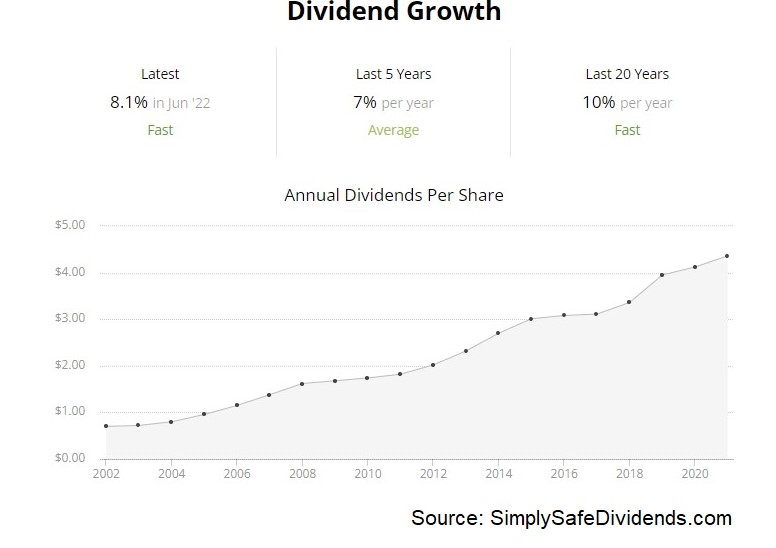 The machinery company has increased its dividend for 29 consecutive years. Yep. We have yet another Dividend Aristocrat on our hands. Caterpillar’s 10-year dividend growth rate of 9.2% gets paired with the stock’s current yield of 2.5%. That’s a nice mix. You get a market-beating yield and inflation-beating dividend growth. Tough to go wrong there. And the payout ratio is only 42.1%, which supports the dividend of today and allows for a bigger dividend of tomorrow.

With this stock down 21% from its 52-week high, I think it’s buyable here.

In fact, I think it’s so buyable, I am buying it. I’m putting my money where my mouth is once more. At the 52-week high of $237.90, I didn’t think it was buyable. Indeed, I wasn’t going anywhere near Caterpillar up there. But down here, below the $190 level, the valuation looks decently appealing – especially after considering the infrastructure spending that’ll take place over the foreseeable future.

We recently put out a full video explaining why I’m buying this Dividend Aristocrat. So check that out for the full scoop. In the meantime, if you haven’t already had a chance to consider Caterpillar, now’s the time to do so.

What do I like about Eastman Chemical? Well, the company has exposure to nearly every industry you could think of, spread out across most major markets in the world. Everyday end products that are used in everyday life often require advanced materials and chemicals in order to be manufactured.

Put simply, Eastman Chemical is a part of the backbone of the global manufacturing complex. And that’s why the company continues to drive its revenue, profit, and dividend higher. The chemical company has increased its dividend for 13 consecutive years. 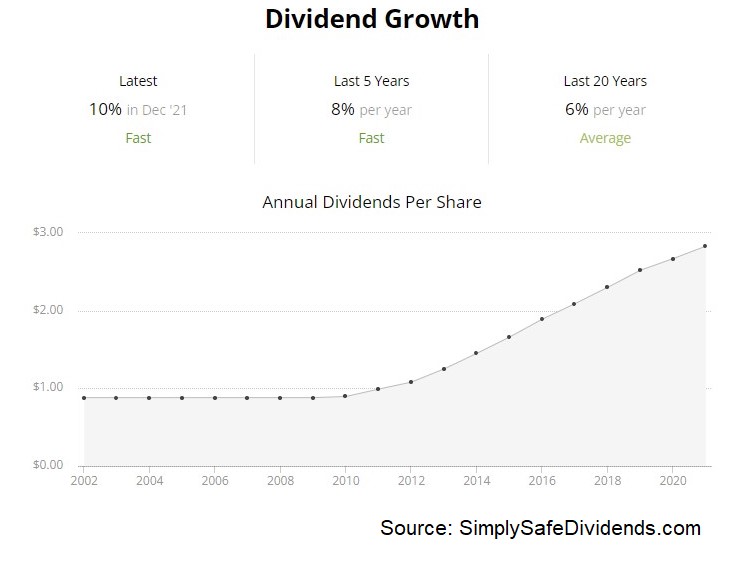 The 10-year dividend growth rate is 11.1%. Double-digit dividend growth is never something I’m going to take for granted or complain about. Plus, the stock yields a rather appealing 3.3%. That’s twice as high as the broader market’s yield. It’s also 40 basis points higher than its own five-year average. This is also a well-covered dividend – the payout ratio is just 31.2%, based on midpoint adjusted EPS guidance for this fiscal year. I expect Eastman Chemical to continue growing the dividend at a healthy rate, even if there’s a near-term downturn in the global economy.

But you know what? That kind of sharp drop is exactly what you want to see if you’re interested in accumulating shares. Why would I rather pay $130/share than $94/share for the same exact business? I’d have to be out of my mind. We recently put out a full analysis and valuation video on Eastman Chemical, showing why the business could be worth $124.48/share.

So the stock looked about fairly valued at its 52-week high. But it looks very undervalued here, close to its 52-week low. Don’t forget about Eastman Chemical.

The fourth stock I’m highlighting today is Nike Inc. (NKE). Nike is a global footwear and athletic apparel company with a market cap of $176 billion.

Nike needs no introduction. Their swoosh is everywhere. The brand value here is off the charts. This company is a juggernaut. And it’s only getting better. While they still rely on retailers to sell their products, Nike is becoming a retail force of their own through company stores and their DTC offerings. Their Nike Direct business saw 14% YOY revenue growth for the last fiscal year and is now generating almost half of the company’s revenue. I foresee even brighter days ahead for Nike and its dividend. 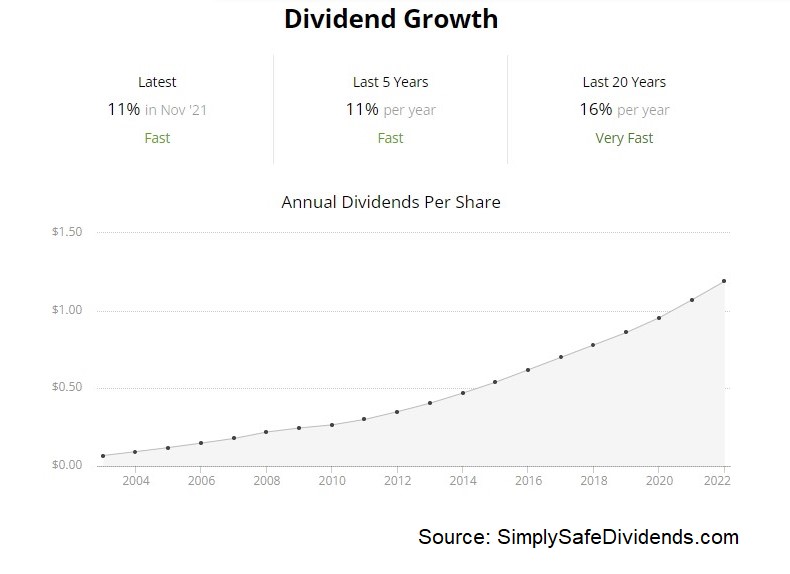 The apparel company has increased its dividend for 21 consecutive years. The thing with Nike is, its stock has always offered a pretty low yield. Even now, after a huge drop in the stock’s price, it’s only yielding 1.1%. But if you’re a younger dividend growth investor, Nike is a world-class compounder.

Nike’s 52-week high is $179.10. The pricing is now at about $112. That’s a massive drop. Now, to be fair, I think a lot of this drop was warranted. Nike simply looked very overvalued at its 52-week high. But after the near-40% fall, the valuation now looks reasonable. 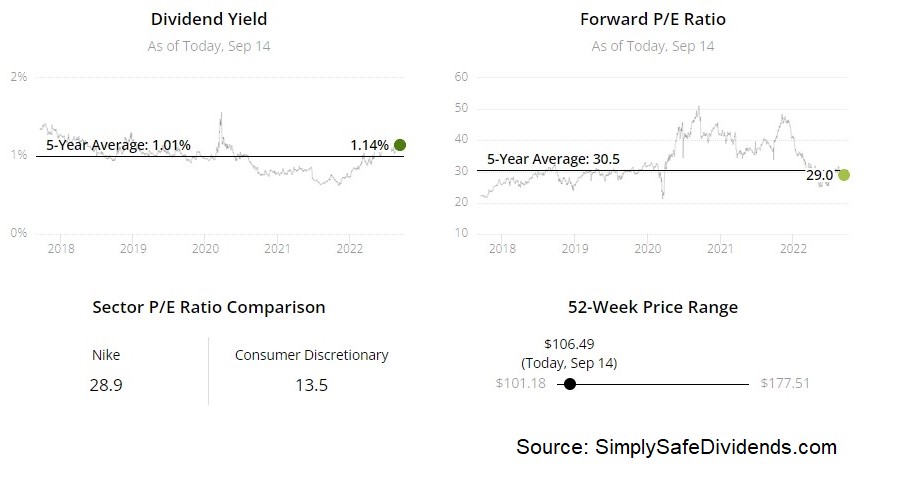 Cheap? No. But not unreasonable, either.

Every basic valuation metric I look at is below is respective recent historical average. The P/E ratio of 29.9 is well off of its own five-year average of 47.1, while the P/CF ratio of 34.9 is slightly lower than its own five-year average of 35.9. I’m not sure if I’d want to get super aggressive with Nike, but it’s at least worth a close look for the first time in a long time.

Last but not least, let’s quickly talk about Pfizer Inc.(PFE). Pfizer is a multinational biopharmaceutical company with a market cap of $268 billion.

Pfizer has had its moments in the sun in the past. Notably, it practically became a household name in the late 90s when Viagra was launched. Well, it’s having its moment in the sun again after helping to co-develop a vaccine for Covid-19.

Now, this pandemic seems to be mostly behind us. But here’s the thing. They are capitalizing on the moment. Pfizer raked in billions of dollars over the course of the pandemic. And they’ve been using some of this capital to take on acquisitions that should leave a lasting legacy and help to fuel future growth. Of course, that bodes well for the dividend. 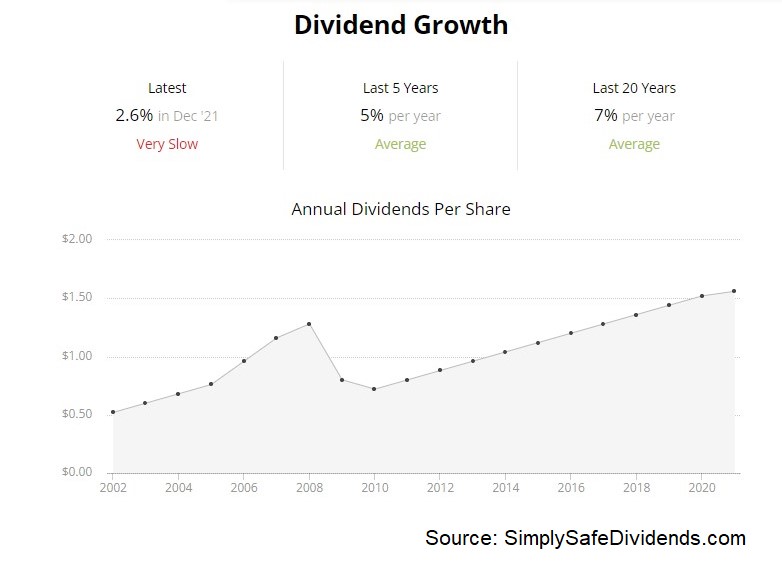 The major biopharmaceutical company has increased its dividend for 12 consecutive years. Not the longest dividend growth track record out there, but Pfizer has shown real commitment to the dividend and the growth of it.

What’s interesting about Pfizer is the balance across the dividend metrics. Nothing really “wows” you. Instead, it’s just a solid combination across the board that gets the job done. You get a nice, market-beating yield of 3.4%. And the 10-year dividend growth rate is 6.5%. The payout ratio, at just 25.1%, based on midpoint guidance for this fiscal year’s adjusted EPS, shows a dividend with a big cushion.

This stock’s 23% slide from its recent high makes it look interesting right now. 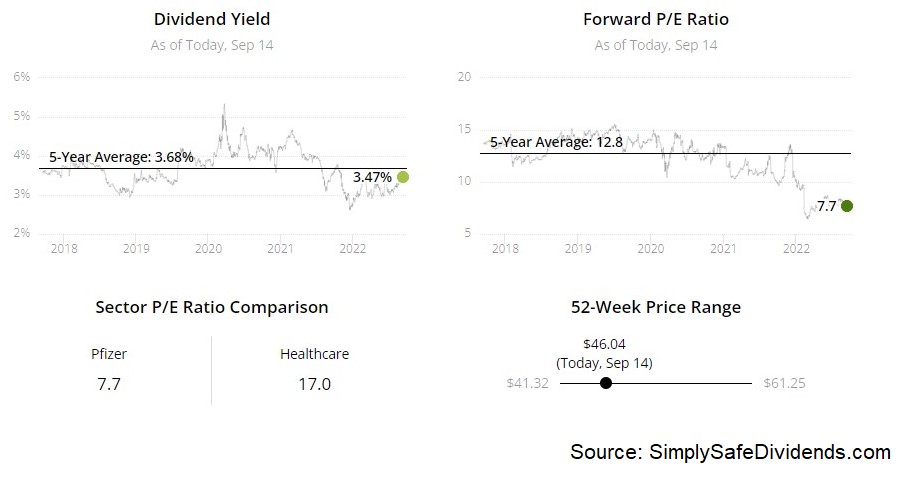 Did Pfizer’s stock get ahead of itself at its 52-week high of $61.71? Probably. But with the stock’s price now around the $48 level, the market might be undercutting some of the permanent benefit the company has accrued as a result of its monstrous sales of product throughout the pandemic.

I think you could easily argue that Pfizer is in the best position it’s ever been in. Despite that, its valuation metrics are actually under their respective recent historical averages.

This disconnect seems funny to me.

The P/E ratio of 9.3, which is substantially lower than its own five-year average of 16.7, is a clear example of this. The company is temporarily overearning right now, sure. But there’s a permanent accrual of capital here. Moreover, the market is already pricing in a near-term comedown in earnings. Pfizer is definitely interesting right now.

The Greatest Trading Book Ever Written [sponsor]
I have been working very hard to introduce you to the greatest trading book ever written. At my trading firm, the very first thing that any new trader had to do was read this book. They wouldn't be allowed in my office if this book was not read. Now, I've taken this book and built an entire trading system around it. For anyone that has any interest in trading, this is a must read. It's about success, failure and then success again. This book is being offered today, Get Your Copy Now.