Berkshire Hathaway (BRK.A) (BRK.B) CEO Warren Buffett has an illustrious track record of making his shareholders richer. Since becoming CEO in 1965, he’s overseen the creation of more than $610 billion in shareholder value and delivered an aggregate return for his company’s Class A shares (BRK.A) of 3,641,613% as of the end of 2021. For context, that’s 120 times the return of the benchmark S&P 500, including dividends paid, over the past 57 years.

Because of the Oracle of Omaha’s consistent long-term outperformance, Wall Street professionals and everyday investors wisely pay attention to what he’s buying and selling.

Warren Buffett has a hidden portfolio you probably don’t know about
Generally speaking, riding Warren Buffett’s coattails is pretty easy to do. Money managers with at least $100 million in assets under management are required to file Form 13F with the Securities and Exchange Commission no later than 45 days following the end of a quarter.

A 13F provides an under-the-hood look at what the brightest minds on Wall Street were buying, selling, and holding in the most recent quarter. Since Berkshire Hathaway is sitting on a mammoth investment portfolio worth almost $341 billion as of September 2, 2022, Buffet’s company is required to file a quarterly 13F. Thanks to this filing, investors have been able to track the more than one dozen stocks Buffett and his team have purchased or added to this year.

However, Berkshire Hathaway’s 13F doesn’t tell the entire story of Warren Buffett’s holdings. The Oracle of Omaha has a secret portfolio with $5.92 billion in assets under management most people probably aren’t aware of.

In 1998, Berkshire Hathaway acquired reinsurance company General Re for the tidy sum of $22 billion. While the reinsurance business was the main reason for the purchase, General Re also owned specialty investment firm New England Asset Management (NEAM). When Buffett’s company bought General Re, it also acquired NEAM.

Although Warren Buffett doesn’t oversee how NEAM invests its $5.92 billion in assets under management (as of June 30, 2022), what NEAM buys ultimately falls under the ownership of Berkshire Hathaway. 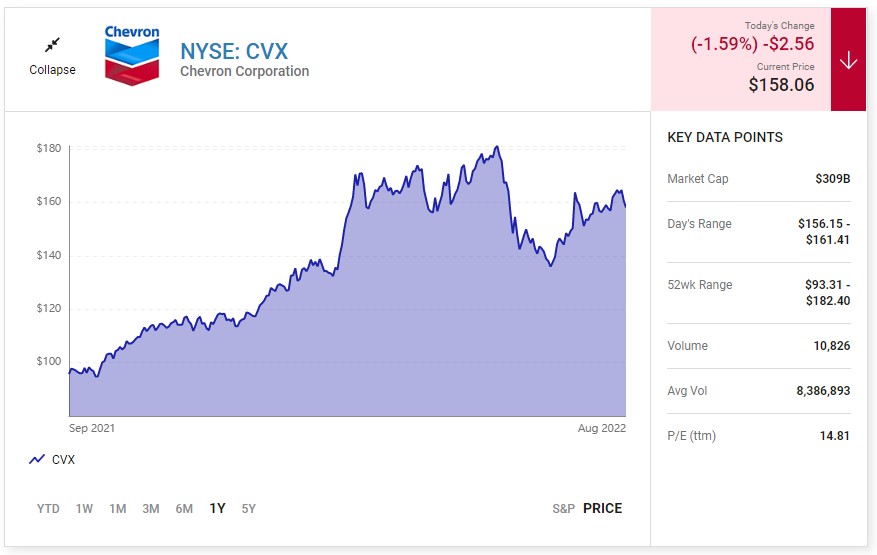 Chevron
The first big buy is oil stock Chevron (CVX), which jumped from just 0.15% of NEAM’s assets at the end of March to 5.26% of its assets by June 30. All told, Buffett’s secret portfolio purchased a little over 2.09 million shares of Chevron in the second quarter. As a reminder, Chevron is the third-largest holding by market value in Berkshire Hathaway’s investment portfolio.

New England Asset Management likely piled into Chevron on the expectation that crude oil and natural gas prices will remain well above their historic averages for a long time to come. For more than two years, the COVID-19 pandemic has created unparalleled demand uncertainty for energy stocks, which, in turn, has led to reduced capital investments in drilling and infrastructure.

To add complications, Russia invaded Ukraine in February, and there’s been no sign that a resolution to this conflict is near. Russia’s actions throw a monkey wrench into an already crippled global energy complex. Without any immediate remedy to domestic and/or global supply shortfalls, crude oil and natural gas prices should remain elevated. That’s a big positive for Chevron given that its upstream drilling operations generate the juiciest margins.

However, Chevron’s being an integrated operator is another reason the world’s most successful investors are buying its stock. In addition to drilling and exploration segments, integrated operators own midstream and/or downstream assets. Midstream assets, such as pipelines and storage facilities, typically operate on fixed-fee or volume-based contracts that produce highly predictable operating cash flow. Meanwhile, downstream assets, such as refineries and chemical plants, benefit when crude oil input costs fall. In other words, Chevron is well hedged against oil price weakness.

Chevron also, arguably, has the best balance sheet of any global oil major. Chevron sports a debt-to-equity ratio below 17% and has generated nearly $40 billion in operating cash flow over the trailing-12-month period (ended June 30). This affords the company the financial flexibility to dole out a 3.6% yield, repurchase up to $10 billion worth of its common stock this year, and potentially make earnings-accretive acquisitions.

HP
The second stock Warren Buffett’s secret portfolio piled into during the second quarter is personal computing and printer solutions provider HP (HPQ). A lot of you might know HP by its former name, Hewlett-Packard, which the company changed to HP in 2015.

Without question, HP was New England Asset Management’s biggest second-quarter buy. The roughly 16.34 million shares purchased increased its stake from 0.08% of NEAM’s portfolio at the end of March to 9.12% just three months later.

If you’re wondering why NEAM’s investment team is so gung ho on HP, the answer probably has to do with some combination of valuation and the company’s capital return program.

On one hand, HP is contending with near-term sales weakness tied to its PC and printing segments. As COVID-19 vaccination rates have ticked up and employees have begun to return to the office, demand for PCs and printers has tailed off. On the other hand, PC sales and printing solutions have, historically, produced reasonably predictable operating cash flow from year to year. Even with this rough patch, HP anticipates reporting adjusted earnings per share (EPS) of $4.02 to $4.12 in fiscal 2022, with free cash flow of between $3.2 billion and $3.7 billion for the year. 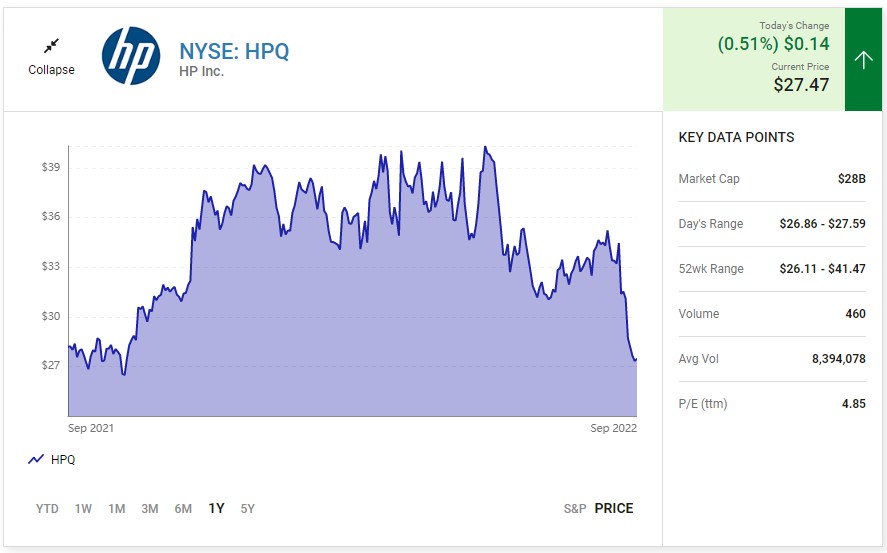 Even if investors make the assumption that HP’s revenue declines by a low single-digit percentage in fiscal 2023, cost-cutting measures and ongoing share buybacks should allow the company to report around $4 in full-year EPS. This works out to a forward-year price-to-earnings (P/E) ratio of less than 7. A P/E ratio this low for a company with sustainably high cash flow could make for an intriguing value investment.