These fast-paced companies have the sustainable competitive advantages necessary to make patient investors a lot richer over the next decade.

Regardless of whether you’ve been putting your money to work on Wall Street for decades or have only recently begun investing, 2022 has been a year for the ages. The first half of the year saw the widely followed S&P 500 deliver its worst return in over five decades. Meanwhile, the technology-centric Nasdaq Composite shed as much as 34% from its all-time closing high in November.

While sizable declines in the major U.S. indexes can be unnerving and test the resolve of investors, history has also shown these drops to be ideal buying opportunities for patient investors. After all, every correction and bear market throughout history (until the current one) has been put in the rearview mirror by an eventual bull-market rally.

It’s an especially intriguing time to go bargain-hunting for supercharged growth stocks powered by innovation. Here are three monster growth stocks that could turn an initial investment of $200,000 into $1 million by 2032.

Upstart Holdings
The first sensational growth stock that has the potential to quintuple your money by 2032 and make you a millionaire from an initial investment of $200,000 is cloud-based lending platform Upstart Holdings (UPST).

As you can imagine, there’s a lot of skepticism surrounding any financial stock tied to loans and loan-vetting at the moment. With the U.S. inflation rate hitting a more-than-four-decade high in June, the Federal Reserve has had no choice but to aggressively increase interest rates. This could sap all types of loan demand and dramatically increase loan delinquency rates. A relatively new company like Upstart, which hasn’t yet navigated its way through a steep economic decline, might experience growing pains. 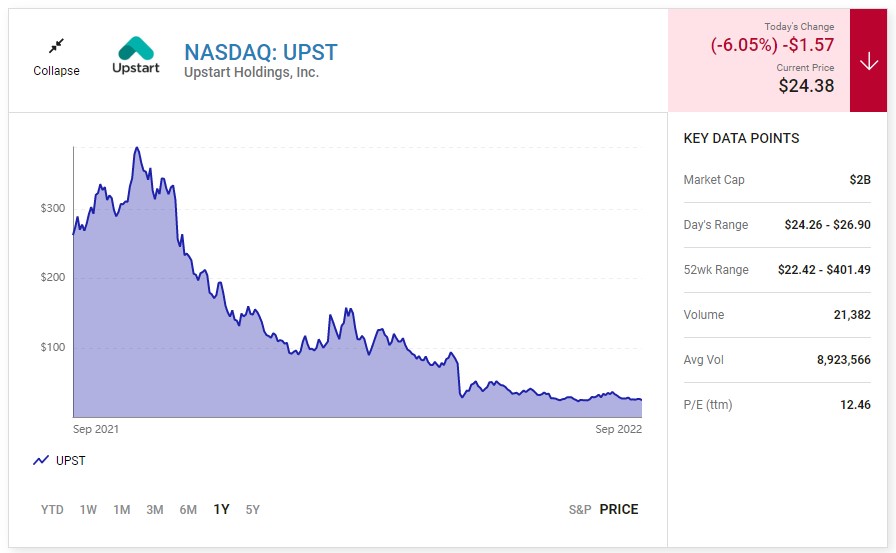 But there are two sides to this coin. Although Upstart is contending with headwinds, it offers clear-cut competitive advantages and has demonstrated that it can thrive during periods of economic expansion.

The obvious differentiator for Upstart is its lending platform, which is driven by artificial intelligence (AI). The traditional loan-vetting process can be costly and take weeks, but close to three-quarters of all Upstart-vetted loans are entirely automated and instantly approved.

Perhaps more important is the fact that Upstart’s vetting process has resulted in a broader swath of loan applicants being approved. Despite Upstart-approved borrowers having lower average credit scores than in the traditional vetting process, the delinquency rates of AI-driven Upstart loans and traditionally processed loans has been similar. The key takeaway: Upstart can bring new customers to its roughly 70 financial partners without increasing their credit-risk profiles.

Furthermore, Upstart only recently began expanding into more lucrative loan origination opportunities. For years, it has primarily focused on vetting personal loans. But with the company now pushing into small business loans and auto loans, its addressable market has grown by a factor of 10. If the company’s AI lending platform garners the attention of the housing industry, and it begins vetting home-loan applications, its addressable market could expand by trillions of dollars.

While there’s no question that Upstart’s near-term operating results will be a bit rough around the edges, the company has a proven platform to disrupt the lending industry. 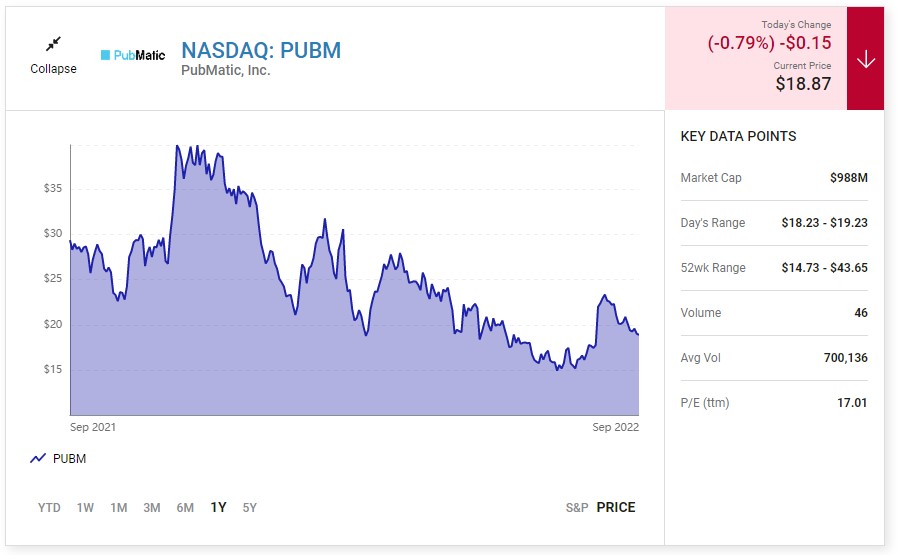 PubMatic
A second monster growth stock that can turn a $200,000 investment into a cool $1 million in 10 years is cloud-based adtech stock PubMatic (PUBM).

Like Upstart, PubMatic finds itself surrounded by skepticism as the U.S. economy weakens. Ad spending is often one of the first things to be hit when economic growth slows or contracts. With most ad-driven businesses modestly lowering their near-term growth forecasts, PubMatic has been dragged down with the pack.

But PubMatic wouldn’t be on this list if it weren’t a growth stock with monster potential.

To begin with, PubMatic benefits from being a sell-side platform, or SSP. This is a fancy way of saying that it provides programmatic ad services for publishing companies and sells their digital display space. Thanks to consolidation, there aren’t too many SSPs at scale to choose from. This makes PubMatic a logical choice for publishing companies looking to sell their digital ad space.

Another reason to be hopeful about PubMatic’s future is the company’s positioning within the programmatic ad space. It’s no secret that ad dollars are shifting from print and billboards to the digital realm, including mobile, video, and over-the-top (OTT) channels. Whereas digital ad spending is expected to grow by 14% annually through 2025, PubMatic has been consistently delivering organic growth of 20% to 50% on a year-over-year basis.

Yet the best thing about PubMatic might be that the company designed and built its cloud infrastructure. While it could have easily relied on third-party providers, building out its own cloud infrastructure should result in scaling efficiencies that produce superior operating margins, relative to its peers.

And in case there are any worries, the company finished the quarter that ended in June with $183 million in cash, cash equivalents, and marketable securities — and no debt. PubMatic looks virtually unstoppable, and its stock is incredibly inexpensive considering the growth runway for mobile, video, and OTT advertising.

Etsy
The third and final monster growth stock that can turn $200,000 into $1 million by 2032 is specialty e-commerce stock Etsy (ETSY).

To echo the theme of this list, Wall Street is worried about the near-term growth prospects for the U.S. economy. A company like Etsy, which predominantly relies on consumer spending, would be vulnerable in the short run to an economic contraction or recession. We’ve witnessed these fears translating to a significant pullback in its shares.

Thankfully, Etsy brings a number of competitive advantages to the table that make it a prime candidate to quintuple in value over the next decade.

For starters, its operating model is vastly different from the myriad of online retail marketplaces consumers can find online. While most e-commerce sites are solely focused on volume, Etsy’s marketplace thrives on personalization. That’s because its online marketplace is comprised of sole proprietors and small businesses creating unique and customizable products. There isn’t a platform at scale that can provide the same personalization of shopping experience that Etsy can deliver. This is a sustainable competitive edge that should drive double-digit sales growth for a long time to come. 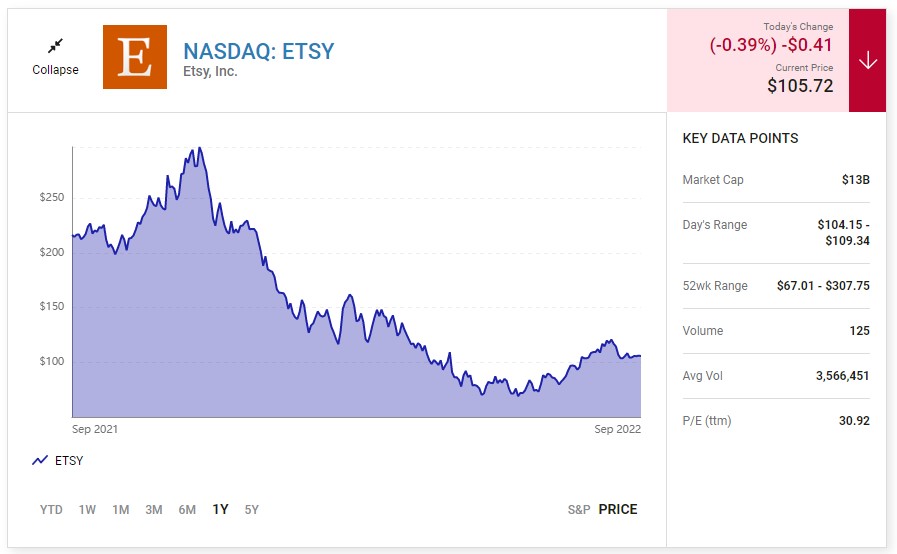 Etsy has also done a phenomenal job of attracting previous buyers back to its platform, as well as moving casual shoppers into the habitual-buying category. A “habitual buyer” is a term used by the company to describe someone making six or more purchases totaling at least $200, in aggregate, over the trailing-12-month period.

As of the end of June, Etsy had approximately 7.8 million habitual buyers, which represented a 248% increase from the comparable quarter in 2019 (that is, prior to the pandemic). Growth in numbers of habitual buyers is precisely why the company can charge merchants more for ads and other services.

Additionally, Etsy deserves credit for aggressively reinvesting in initiatives designed to keep shoppers engaged and help its merchants grow. It’s introduced and expanded video advertising to engage consumers, beefed up search capabilities on the platform to allow for quicker purchases, and invested in data analytics for sellers.

If Etsy can remain overwhelmingly profitable in this challenging environment, imagine what it can do during disproportionately long periods of economic expansion.