The market continues its roller coaster-like behavior. As I write this, the US Federal Reserve’s annual Jackson Hole symposium wrapped up only days ago. And boy, the market didn’t like Chairman Jay Powell’s speech.

The Dow Jones Industrial average dropped 1,000 points after Powell wrapped up his remarks. But if you’re a young, long-term dividend growth investor actively accumulating shares in world-class businesses, this is exactly what you want.

All else equal, lower prices equal higher yields. That’s more passive dividend income on the same investment dollar. Plus, it sets you up for better long-term total return prospects.

Seeing short-term volatility as a long-term opportunity is something that helped me to go from below broke at age 27 to financially free at 33.

By the way, I explain exactly how I achieved financial freedom in just six years in my Early Retirement Blueprint. If you’re interested, you can download a free copy of my Early Retirement Blueprint. But all volatility is not created equal, nor are all stocks created equal. Focusing on the very best long-term ideas right now is what this is all about.

Today, I want to tell you my Top 5 Dividend Growth Stocks for September 2022.

Air Products & Chemicals is a major global producer and supplier of industrial gases.

Industrial gases are critical input for the manufacturing processes of many different end products ranging from electronics to vehicles. Because of the critical but low-cost nature of these industrial gases, a manufacturer will set up a long-term contract with a dependable provider of these gases. That sounds like money to me.

For perspective, the company’s guidance for adjusted EPS for this fiscal year, at the midpoint, is calling for 14% YOY growth. Furthermore, CFRA believes that Air Products & Chemicals will compound its EPS at an annual rate of 15% over the next three years.

That should allow the company to continue growing its dividend at a high rate. 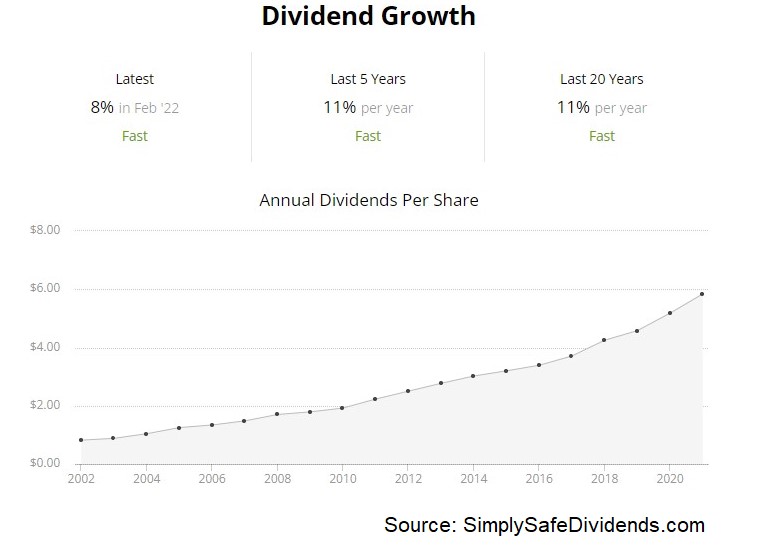 Already, with 40 consecutive years of dividend increases, this is an esteemed Dividend Aristocrat. So the dividend reliability here isn’t in question. The 10-year dividend growth rate of 10.1% further goes to show this company’s dividend pedigree. And the stock even yields a rather appealing 2.5%.

The payout ratio is 62.9%, based on midpoint guidance for this fiscal year’s adjusted EPS. A bit high. But not concerning. And with an acceleration in EPS growth expected to play out, this payout ratio should compress.

This is a great business available for what looks like a great valuation.

The P/E ratio is sitting at 25.6, which is well off of its own five-year average of 29.1. Because of lumpy GAAP EPS that often do not accurately reflect the company’s true earnings power, these numbers look somewhat high. Still, we can see that the current earnings multiple is quite a bit lower than it usually is.

We put out a full analysis and valuation video on Air Products & Chemicals only weeks ago, showing why the business could be worth about $330/share. As I write this, we’re currently around $262/share. So I see a lot of possible upside here. Don’t forget about this Dividend Aristocrat.

BlackRock is a multinational asset manager.

With approximately $8.5 trillion in assets under management, BlackRock is the largest asset manager in the world. It’s arguable that no company does it better than BlackRock.

It’s inarguable that no company does it bigger than BlackRock. And this is an area where you want massive scale, as you’re taking advantage of exponential growth in global capital markets to a disproportionate degree. And, sure, we can talk about the law of large numbers. But it hasn’t stopped BlackRock. Indeed, the company grew its revenue at a CAGR of 8.5% and its EPS at a CAGR of 12% over the last decade.

Excellent business growth, even at scale, and this has led to excellent dividend growth.

BlackRock has increased its dividend for 13 consecutive years. And what a start they’re off to. The five-year dividend growth rate is 12.5%, which lines right up with EPS growth. Along with that double-digit dividend growth rate, the stock yields a market-beating 2.9%. And with a payout ratio of 51.4%, BlackRock almost perfectly balances retaining earnings for business growth against returning capital back to shareholders. Love it. 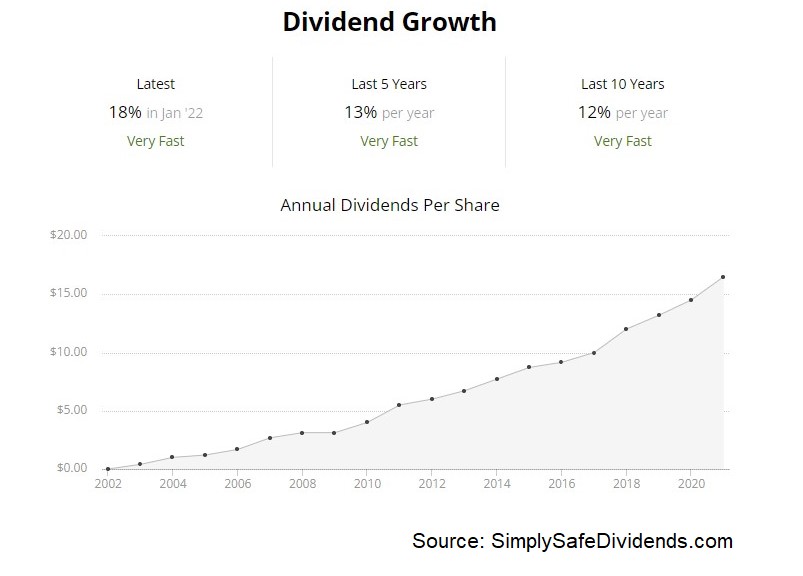 Want another reason to invest in BlackRock? How about an attractive valuation?

Asset management is a fantastic business model. There’s a rising tide (global equities) exponentially lifting all boats, except BlackRock is the largest boat in that rising tide. And that bodes well for the fees they can generate. Despite that, the stock is trading hands for a P/E ratio of only 17.8.

That’s well below its own five-year average of 19.4. We recently put together a video highlighting BlackRock’s quality and valuation, and that video shows an estimate for the business’s fair value at nearly $900/share. With the stock currently priced around $675, BlackRock looks seriously undervalued. Take a look at it.

Eastman Chemical has exposure to nearly every industry you could think of, spread out across most major markets in the world. Countless everyday end products that are used in everyday life require advanced materials and chemicals in order to be manufactured.

What this means is that Eastman Chemical forms part of the backbone of the global manufacturing chain, which has led to solid growth across the business. Revenue has a CAGR of 2.9% over the last decade, while EPS has a CAGR of 8.8% over that period. 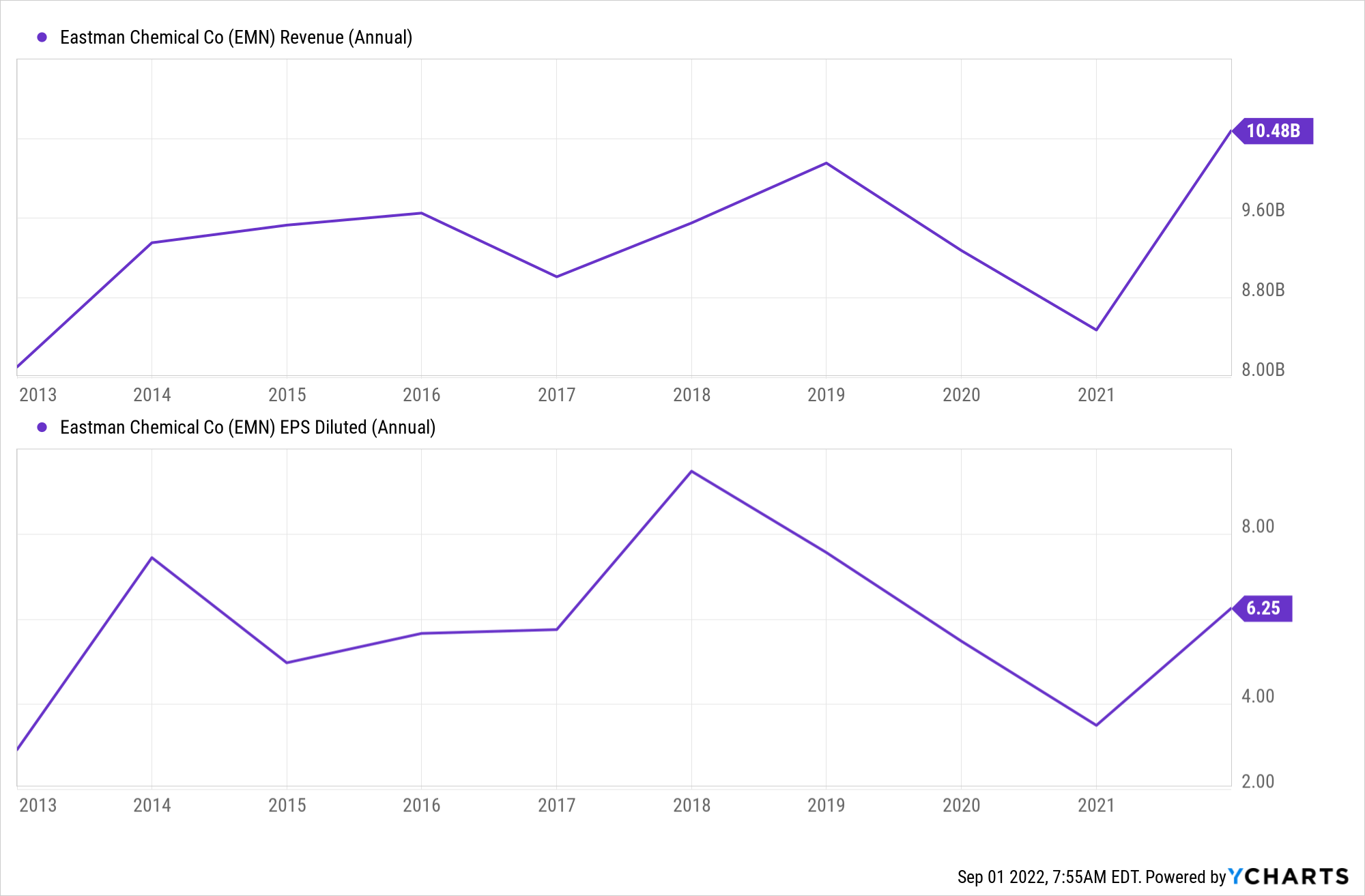 The company has increased its dividend for 12 consecutive years, with a 10-year dividend growth rate of 11.1%. So the growth of the dividend has outpaced EPS growth over the last decade, but the size of dividend increases can be a bit inconsistent. Just something to keep in mind.

What is really interesting about Eastman Chemical is that its yield of 3.2%, which smokes the broader market, is actually quite high when you line it up against that high dividend growth rate. It’s tough to complain about a 3%+ yield and an 11%+ long-term dividend growth rate. And the payout ratio, at 31.2%, based on midpoint adjusted EPS guidance for this fiscal year, reveals a super secure dividend. 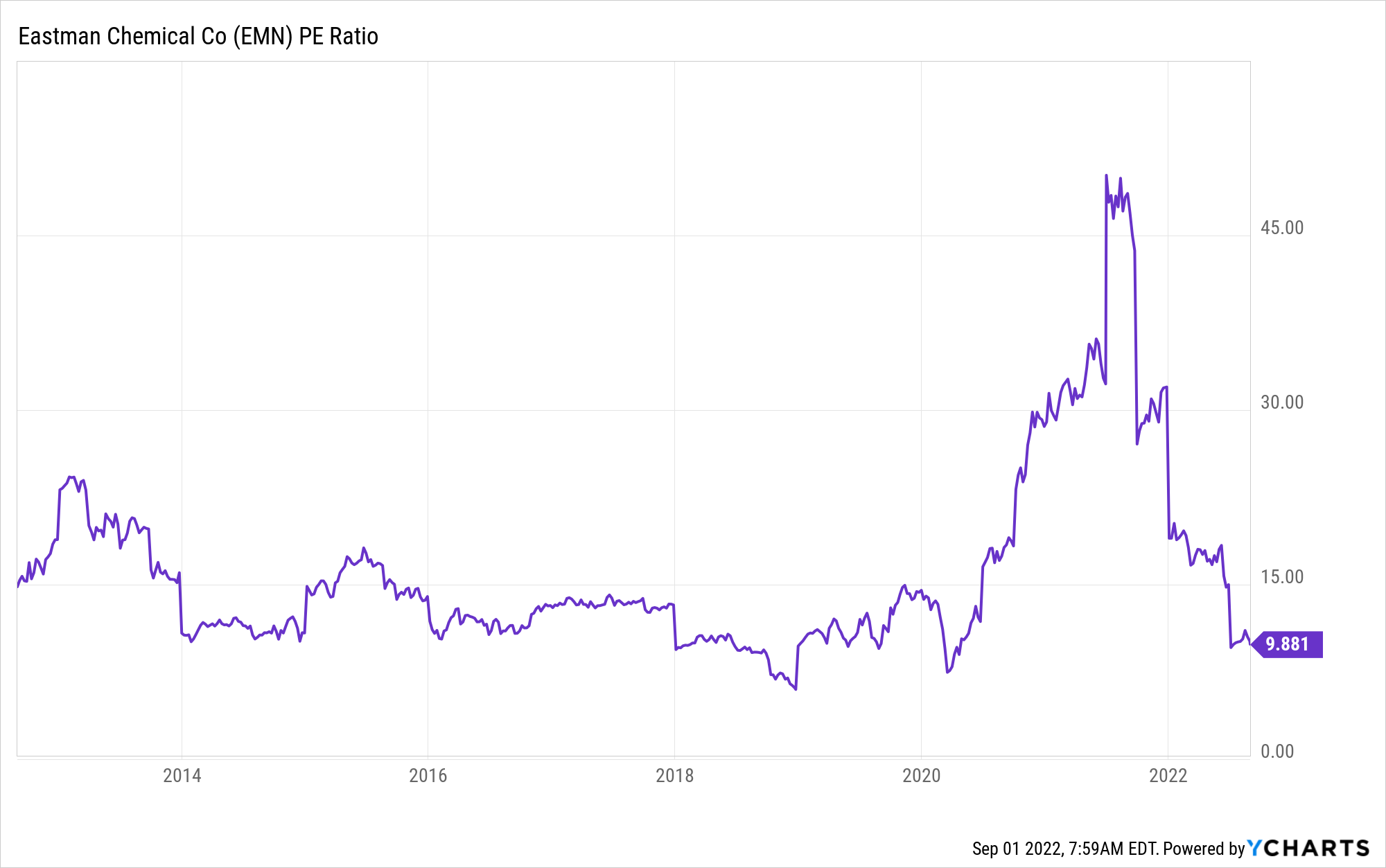 Every basic valuation metric I look at indicates cheapness. A good example is the P/E ratio of 10.4. That’s nearly a single-digit P/E ratio, which is crazy for a business that’s proven itself capable of growing at a high-single-digit rate. This is almost half of the broader market’s earnings multiple. It’s also significantly lower than its own five-year average of 17.3.

We just put out a video going over how cheap Eastman Chemical looks. In that video, which also analyzes the entire business, the estimate for fair value came out to almost $125/share. The stock is currently priced around $95. Again, it looks cheap. If you can stomach some of the cyclicality that comes with a chemical business, Eastman Chemical is very, very interesting right now. 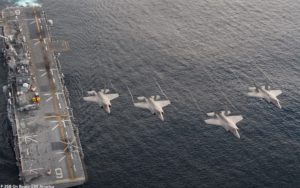 We have a very simple long-term investment thesis here.

That was true when we were fighting with rocks.

It’s true now that we’re fighting with missiles. And it’ll be true 1,000 years from now.

You know what else is a slam dunk? This dividend.

It’s a dividend that’s been increased for 19 consecutive years, and I really think Lockheed Martin is just getting started. The 10-year dividend growth rate of 12.5% is paired with a current yield of 2.6%. Pretty solid combination there. And with a moderate payout ratio of 52%, based on the company’s EPS guidance for this fiscal year, the dividend is almost guaranteed to head higher from here. 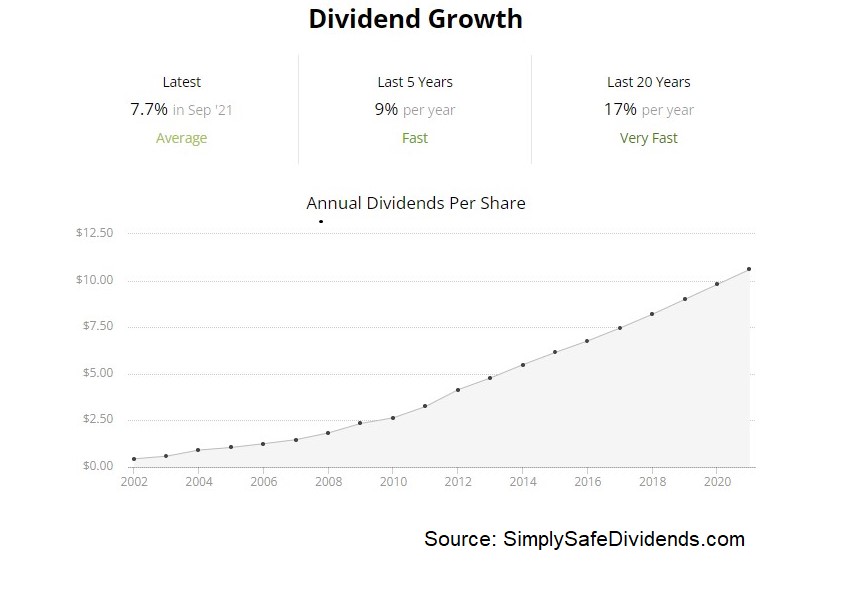 Best of all? The stock looks inexpensive.

We recently put out a full analysis and valuation video on Lockheed Martin’s business, estimating fair value at nearly $450/share. The stock is currently priced at $430. Super cheap? No. But it looks like a good deal on a great business that has a ramping demand runway for its products that extends far beyond my lifetime. It’s worth consideration, if not capital.

Texas Instruments is a technology company that designs and manufactures semiconductors.

This company’s focus on analog chips and embedded processors has set it up to be a critical part of the value chain for a variety of applications – ranging from smartphones to autos – because its products are often both necessary and low cost. 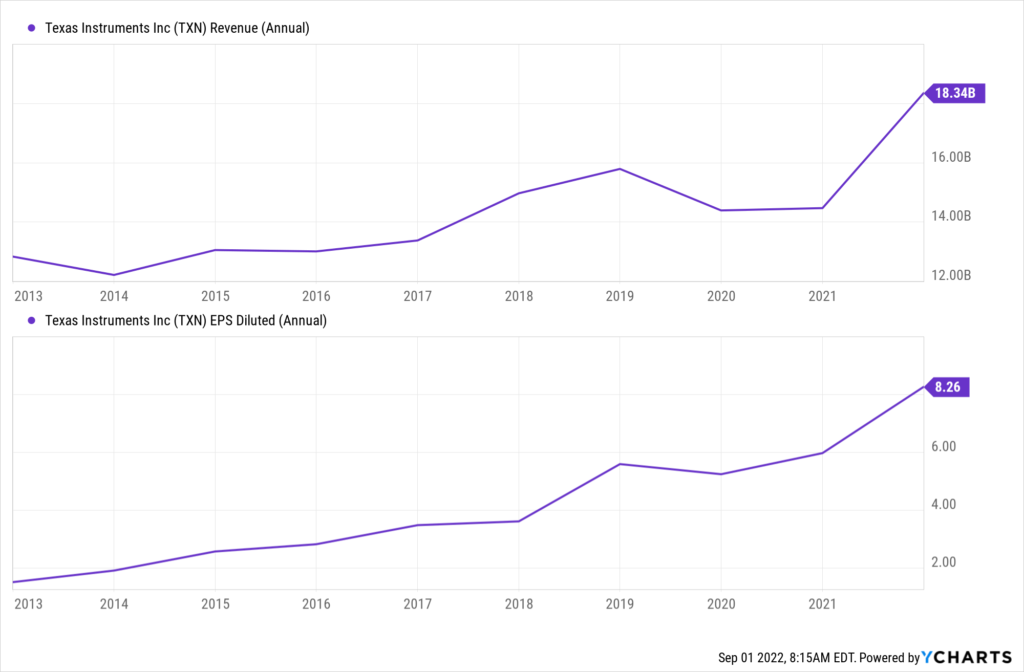 Yep. Texas Instruments has increased its dividend for 18 consecutive years already, and I have little doubt they’ll be increasing the dividend for another 18 consecutive years. The 10-year dividend growth rate of 22.4% shows what a dividend growth monster this name has been. That kind of high growth rate often means you have to sacrifice yield, but not in this case. The stock yields 2.7%.

It’s rare that you get a near-3% yield with a 20%+ long-term dividend growth rate. Another great thing about this dividend? The payout ratio is 50.3%, which is basically a perfect harmony between retaining capital and rewarding shareholders. I love it.

This is a very high-quality dividend growth stock. And the valuation looks reasonable.

I’d actually argue that Texas Instruments is worth paying a premium for. But I don’t think you have to. Not at the current valuation. The P/E ratio of 18.4 is favorably disconnected from its own five-year average of 24.1. The P/CF ratio of 18 tells a similar, albeit less extreme, story – it’s measurably lower than its own five-year average of 19.3.

Also, that aforementioned 2.7% yield is 30 basis points higher than its own recent historical average. I really like this business up to $185/share. It’s available for $168/share. If your portfolio could use some tech exposure, this is one of my best long-term ideas in this space for dividend growth investors.