Following years of network superiority, which previously allowed Verizon to charge premium subscription rates, there is now far more network coverage parity between the major telecoms – making it harder for the prominent “can you hear me now?” service provider to charge industry high prices.

With improved networks and more aggressive marketing, T-Mobile and AT&T’s churn rates, which reflect the percentage of customers lost each period, have materially improved to around what were previously Verizon’s industry-leading levels. 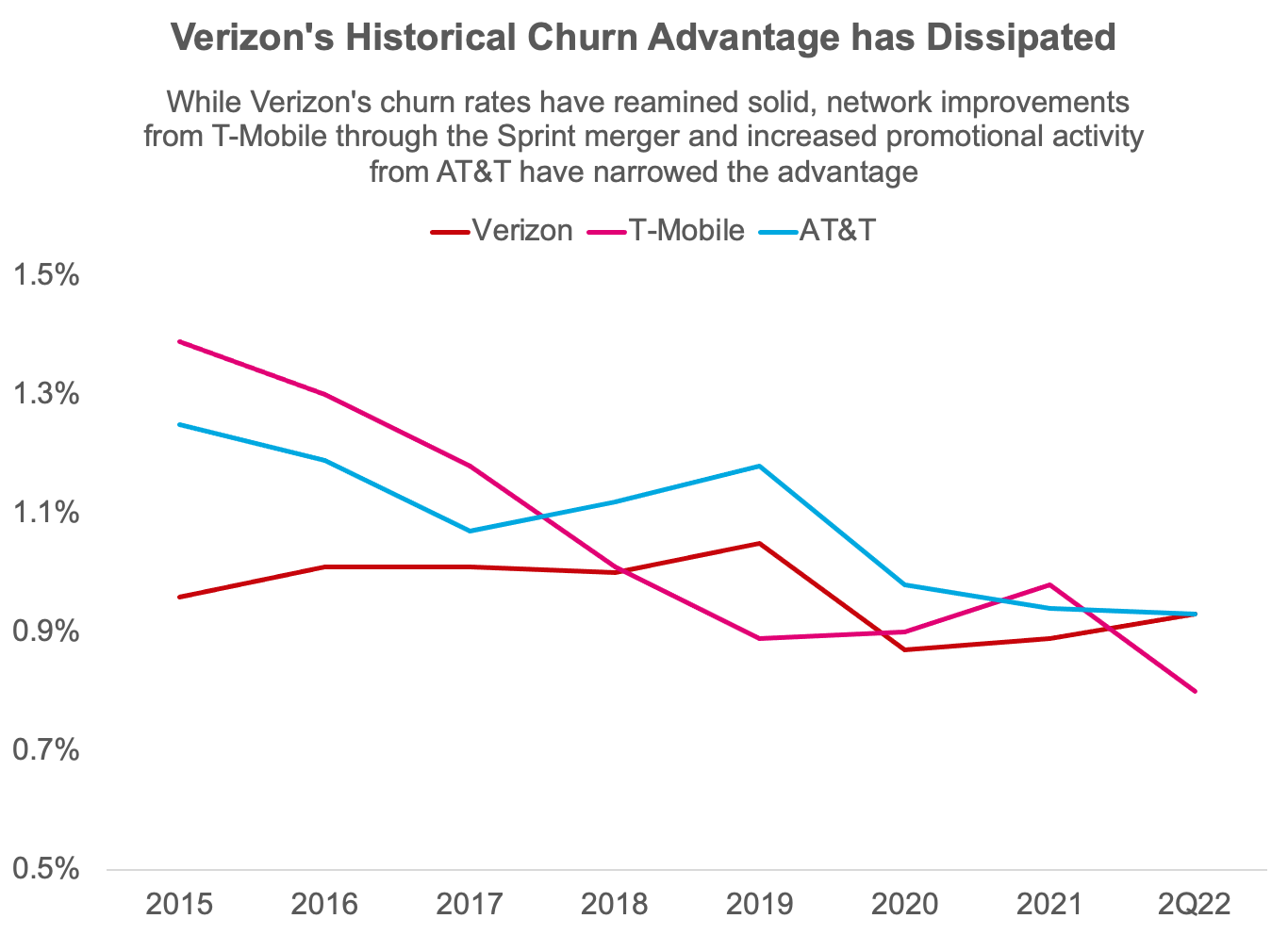 As Verizon adjusts to this new reality, market participants fear the firm will need to participate more actively in promotional activity to attract new customers. The result could be margin pressure and slower deleveraging following last year’s record spending on 5G spectrum.

Concerns are further amplified by an American cell phone market that’s assumed to be fully saturated. With limited options for customer growth, major telecoms may need to compete more on price than ever before.

Despite the challenges of a mature market, Verizon is successfully nudging customers to higher-margin premium plans. In just nine months, premium plan subscriptions have increased from 30% to 39% of the company’s postpaid subscriber base (i.e. recurring monthly contracts).

But new subscriber growth has trailed rivals this year, which may be the most significant factor contributing to the stock’s underperformance. Lagging customer growth could be attributed to the fact Verizon is typically more selective with new customers.

Although subscriber growth has been muted, Verizon’s reliably low churn rates have helped the firm maintain a steady level of postpaid customers. 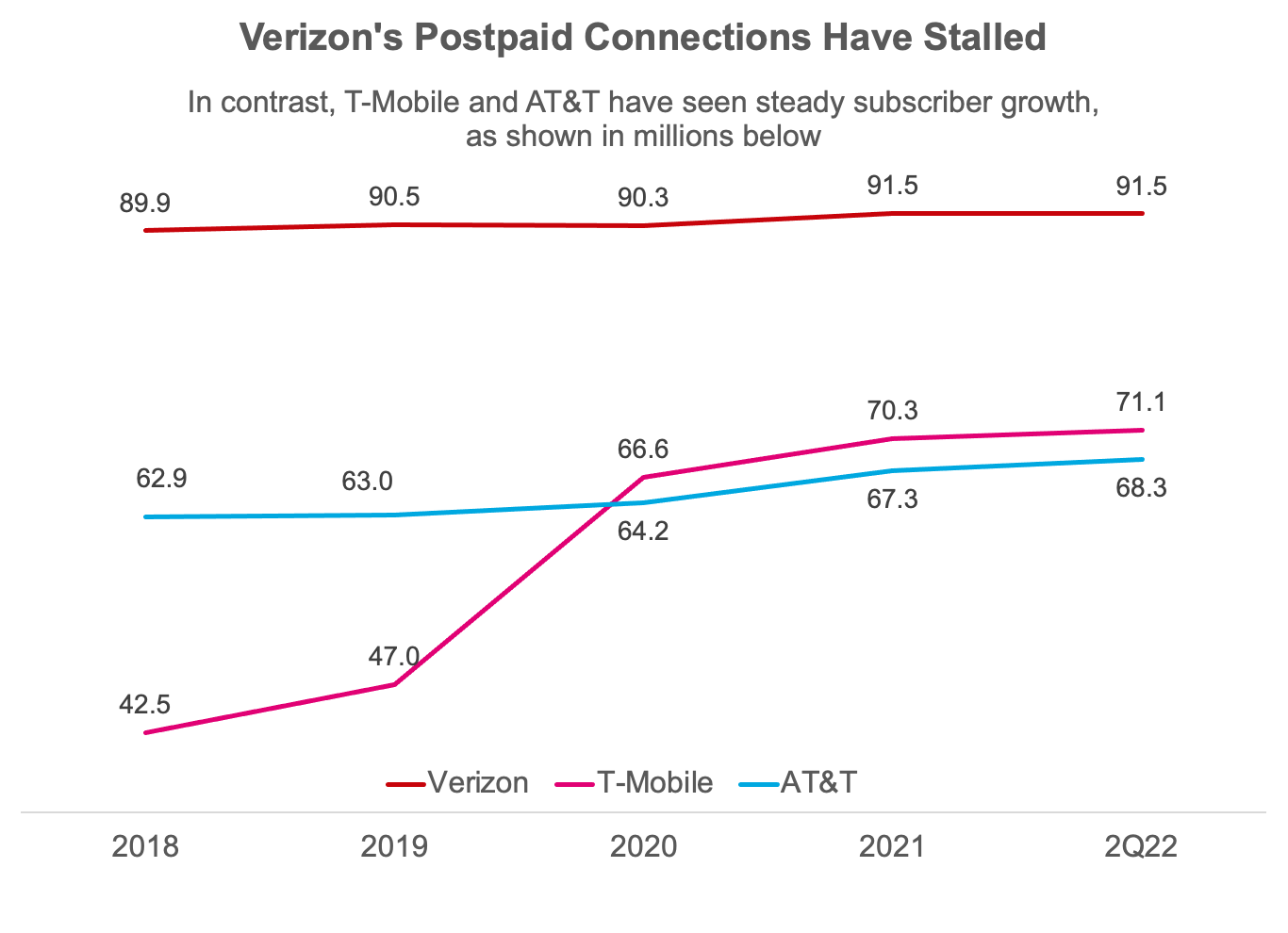 Nearly every American teenager and adult already has a cell phone. As such, the industry’s aggregate customer growth typically comes from shifting people with poor credit histories from cheaper pre-paid plans to higher-margin monthly contracts.

These higher-risk customers, which Verizon usually avoids, can be good for short-term growth. However, they can also prove problematic when subscribers take advantage of a promotion, like getting a free phone, then failing to make monthly payments.

Situations like these can amplify during recessions or inflationary periods and impact a carrier’s profitability. In fact, last month, AT&T stated it’s beginning to see customers put off paying phone bills as inflation squeezes pocketbooks.

Verizon’s focus on quality customers could prove a benefit in the long run and provide stability, despite the appearance of falling behind right now.

Either way, we’ll likely continue to see ebbs and flows with subscribers as users chase promotions. In the long run, however, Verizon’s commitment to providing a best-in-class network should continue to garner customer loyalty and sticky revenue.

Although the prospect of growth seems dim at the moment, Verizon’s investments in 5G wireless and fiber-optic cables to provide internet to businesses, homes, and other connected devices could accelerate growth down the road as we become an even more “connected” society.

And given the high costs of building communication networks, Verizon, AT&T, and T-Mobile should maintain their oligopoly status with little threat of new entrants. Especially when considering most up-and-coming telecoms have to rent network access from the big three, making it hard to ever be considered a real threat.

Overall, even without a notable near-term growth catalyst on the horizon, Verizon is still well-positioned in the industry and operates a recession-proof service that looks poised to continue generating stable cash flow and paying a well-covered dividend. As such, we are reaffirming Verizon’s Very Safe Dividend Safety Score. 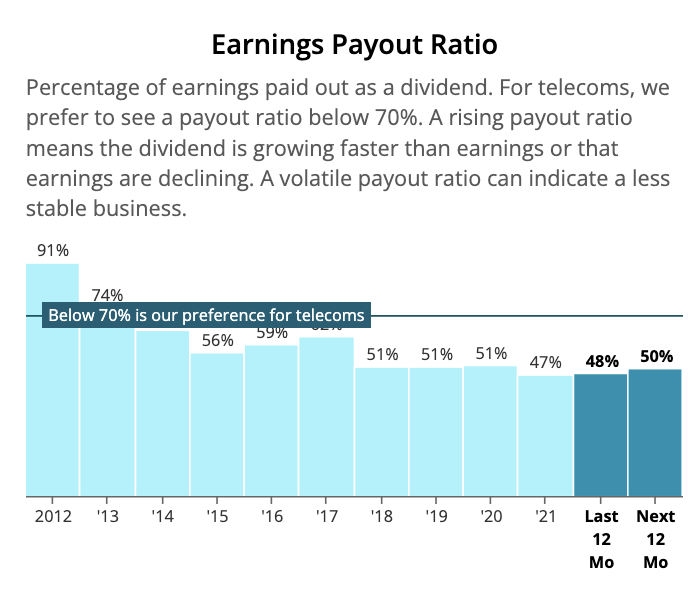 It’s also worth noting that Verizon’s capital intensity will peak this year as the company completes spectrum deployments to bring 5G to more customers. As growth spending moderates in the years ahead, Verizon will retain more free cash flow to support deleveraging and the dividend.

Overall, we expect Verizon to announce around a 2% dividend raise in the next two weeks, in line with the firm’s historical timing for delivering payout increases.

With the stock’s dividend yield sitting near its highest level in a decade, Verizon shares may appeal to conservative income investors who share our belief that the firm’s long-term outlook appears intact.

This article was originally published by Simply Safe Dividends, the makers of online portfolio tools for dividend investors. Try their service FREE for 14 days.