The data justifies waiting to claim Social Security benefits for many Americans.

Over 50 years ago, preschoolers at Stanford’s Bing Nursery School were given a choice. They could either eat one marshmallow immediately or wait 20 minutes and get two marshmallows. The kids were then tracked for decades. The ones who waited fared better in multiple ways, including higher SAT scores and increased self-worth.

It might seem like a no-brainer to push back as long as possible. But should you really wait until 70 to claim Social Security benefits? Here’s what the statistics show.

The advantage of waiting
Let’s assume you steadily earned the level for maximum Social Security benefits throughout your career and opted to claim your benefits at age 62 in January 2022. Your monthly retirement benefit would be $2,364, according to the Social Security Administration (SSA).

Now, let’s suppose you wait to age 67 to claim benefits. Your monthly check would increase to $3,568. However, if you chose to delay claiming Social Security benefits until age 70, you’d receive a whopping $4,194 per month.

This isn’t as great of a deal as the preschoolers getting twice as many marshmallows by waiting 20 minutes. However, there’s clearly a financial advantage to delaying when you claim Social Security retirement benefits.

Do statistics work against delaying?
So is delaying until age 70 to claim Social Security benefits a smart move? It’s true that you’ll receive a higher monthly check if you wait. However, it’s important to look at what your cumulative benefits will be. 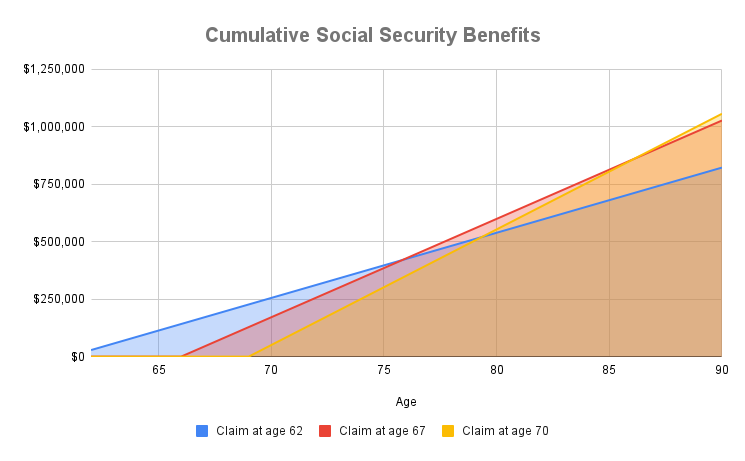 The above chart shows the cumulative benefits by age for claiming Social Security at ages 62, 67, and 70. Note that the calculations use the maximum Social Security benefit amounts mentioned earlier.

Now for arguably the most important statistics. The average lifespan for men in the U.S. is 75. It’s 81 for women. Based on this, many Americans won’t be better off waiting until age 70 to claim Social Security benefits because they won’t live long enough for it to pay off.

However, there’s more to the story. For Americans who live to age 65, the average life expectancy is another 19.1 years for males and another 21.7 years for females. This changes the decision-making dynamics.

We haven’t factored in the time value of money, though. Even if you didn’t need Social Security benefits at age 67, you could claim them and invest the money in a low-risk alternative such as Treasury bonds. Doing so would push out how long it would take to justify delaying claiming benefits even further.

You could enjoy a much longer life than the average life expectancy. It’s possible that you’ll be able to rake in far more total benefits from Social Security by waiting to claim benefits than you would have by claiming benefits at an earlier age. But maybe you won’t.

Regardless of what your decision is, go ahead and eat a couple of marshmallows if you’d like. There’s no psychologist watching.