Bond investors are finally pricing in tough economic times ahead…

Sure, bonds as a whole have crashed this year. We just finished the worst half-year on record for fixed-income investors. But there’s more to the story.

The junk-bond market finally started acting the way we’d expect it to. It has been crashing too… which means junk-bond yields are soaring.

Importantly, these yields have risen faster than those of other bonds. That’s a bad sign. But history suggests things could get much worse from here for junk bonds… and the economy.

Junk bonds are more susceptible to an economic slowdown than any other part of the bond market. Heck, just look at the name. These aren’t your safe-haven U.S. Treasury bonds.

They’re issued from businesses at higher risk of defaulting. That doesn’t necessarily mean those businesses are bad… But they tend to suffer the most during tough times.

Junk bonds almost always pay higher yields as a result. Investors demand a higher premium in exchange for the risk they’re taking. But that premium moves around over time. And right now, it’s soaring. 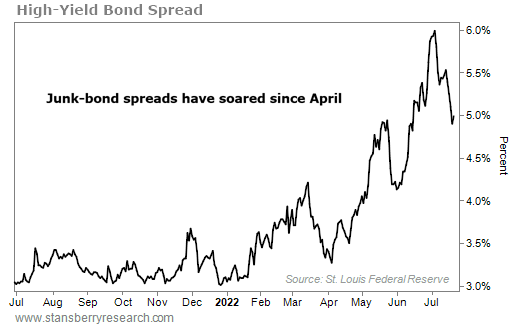 When this spread rises, it means investors are worried. Notice how it jumped from a little more than 3% in April to nearly 6% earlier this month.

That’s a multiyear high. And it’s a clear warning sign from the bond market. Tough economic times are likely on the way. But according to history, we likely haven’t seen the worst just yet.

The recent spike looks a lot different when we zoom out on the chart. We see that the latest move is large for the last couple of years. But it’s nothing compared to history. Take a look… 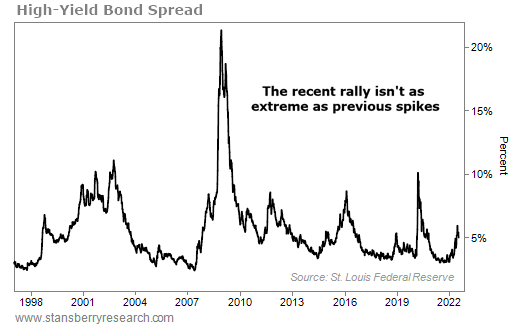 The junk-bond spread topped 10% during the COVID-19 panic… And it was well over 20% during the global financial crisis. Heck, it even approached 9% in 2016 as crashing oil prices wreaked havoc on the energy sector.

So what do we make of this recent short-term spike?

We take it as a warning of what’s possible from here.

We just finished a brutal first half to the year. And it’s easy to think (or at least hope) that the worst is behind us. That could be the case. But the bond market is telling us that tougher times could be on the horizon.

In times like this, we want to be patient. We want to have a plan – and stick with it.

That means following your stops to protect yourself… and waiting for the trend before getting aggressive in stocks. Prices have risen slightly over the past month. But a clear uptrend isn’t here just yet.

We don’t know how long it’ll take to show up. But the bond market says we could be waiting for a while. And things could get much worse in the meantime. So for now, be patient.