It’s been a rough year so far for the economy. Inflation is the highest its been in more than 40 years, the S&P 500 is inching closer to bear market territory, and there’s a chance that we could be headed toward a recession.

While nobody knows for certain what the future holds for the economy, some experts believe that there’s at least a 50% chance that we could face a recession in the next 18 months.

If you’re concerned about a potential recession and its impact on your investments, that’s normal. But here are a few tips from famed investor Warren Buffett that could help calm your nerves.

1. Don’t be afraid to continue investing

When stock prices are falling and the economy is sinking, it may not seem like the best time to invest. However, downturns can be the perfect opportunity to buy more because prices are lower.

Back in 2008, at the height of the Great Recession, Buffett wrote an Opinion piece for The New York Times. In it, he said: “In short, bad news is an investor’s best friend. It lets you buy a slice of America’s future at a marked-down price.”

If previous recessions have taught us anything, it’s that the market will recover eventually. By continuing to invest during a downturn, not only can you snag high-quality investments at a discount, but you can also set yourself up for significant gains when stock prices rebound.

2. Invest for the long term

Nobody — even Warren Buffett — can predict exactly how the stock market will perform in the coming weeks or months. If we face a recession, nobody knows how severe it will be or how long it might last.

What we do know, though, is that over the long term, the market will see positive average returns. No matter how bad things get in the short term, they will improve over time. 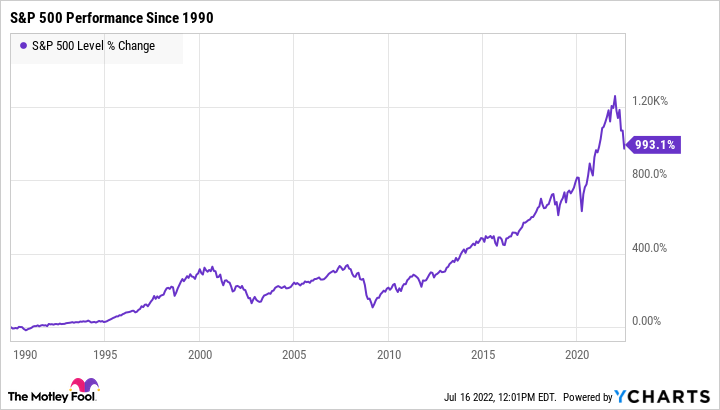 It’s not always easy to focus on the long term, especially when the future looks bleak. But do your best to remind yourself that the market has faced many crises in the past. Despite everything, though, it’s thrived over time. Said Buffett in the New York Times article:

Over the long term, the stock market news will be good. In the 20th century, the United States endured two world wars and other traumatic and expensive military conflicts; the Depression; a dozen or so recessions and financial panics; oil shocks; a flu epidemic; and the resignation of a disgraced president. Yet the Dow rose from 66 to 11,497.

Continuing to invest during a market slump can be a smart idea, but the key to success is choosing the right investments.

In a letter to shareholders, Buffett explains that he and business partner Charlie Munger focus first and foremost and investing in businesses rather than stocks, saying: “[W]e own stocks based upon our expectations about their long-term business performance and not because we view them as vehicles for timely market moves. That point is crucial: Charlie and I are not stock pickers; we are business pickers.”

Not all stocks will be able to survive a recession, but healthy companies have the best chances. Businesses with strong fundamentals are the most likely to see growth over time, and the more of these companies you own, the better off you’ll be.

Making the most of a recession

Recessions aren’t easy, and even the most experienced can struggle sometimes. But it’s possible to get through them with the right strategy.

By investing in strong stocks and keeping a long-term outlook, you can rest easier knowing you’re doing everything possible to protect your finances — regardless of what happens with the economy.