Before the mayhem, Ukraine was known as “Europe’s breadbasket.”

The most fertile soil deposits on Earth lie within the country’s borders. This “chernozem” (or “black soil”) lets the nation produce massive wheat and oilseed exports.

But the Russia-Ukraine war threw the breadbasket into chaos…

A Russian blockade halted Ukraine’s agricultural exports. Food prices have soared worldwide as a result – and that’s on top of existing inflation.

I’m not sharing this to alarm you, though. In fact, I want to highlight some early signs of relief…

New data shows that the rate of food inflation may be stalling, at least for the moment. And if this trend holds, we should see a pause in our climbing grocery bills.

In 2020, staff shortages due to COVID-19 crippled meat-packing plants. That put a squeeze on beef and chicken. Then, turnaround times for cargo vessels nearly doubled in 2021, slowing food imports to a crawl.

Plus, nearly $20 billion worth of U.S. crops failed due to natural disasters in those two years combined.

The costs of these headwinds made their way to store shelves. From 2020 to 2022, the price of food and drink soared by 10% for urban consumers.

Then, on February 24, the situation went from bad to worse. That’s when Russian troops set foot on Ukraine’s treasured soil.

The Russian blockade kept Ukraine from selling grain. On top of that, much of the world sanctioned Russian oil, making it more costly to transport food and agricultural products.

We can track food prices using the Bloomberg Agriculture Spot Index. This index shows the cost of agricultural commodities like wheat, soybeans, and corn… And it broadly reflects the supply-demand dynamic for food in the U.S.

Before the pandemic, this index rose modestly. It was up about 9% in 2019.

But the first half of 2022 has dwarfed even those moves. This year, the index soared almost 30% to its mid-May peak. Take a look… 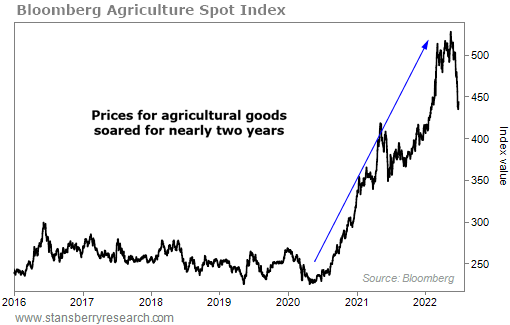 This dizzying rise put a major dent in consumers’ wallets. But relief might be on the way. You can see it on the right side of the chart…

This index is now in decline. In fact, June was its biggest monthly fall in more than 10 years. That’s great news for American consumers.

What’s more, this move is being echoed outside the U.S.

The U.N.’s Food and Agriculture Organization (“FAO”) tracks price changes in various food commodities across the globe. It wraps this data into the FAO Food Price Index.

The Food Price Index has fallen for two consecutive months. Take a look… 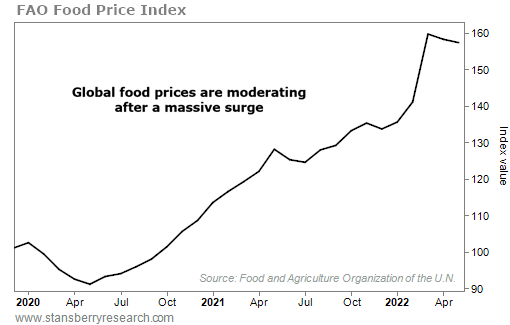 After a blistering streak to the upside, food prices are starting to come back down…

Prices are also falling for coarse grains like corn, thanks to improved growing conditions in the U.S. And as for Ukraine, the nation’s agriculture exports were up 80% in May.

Whatever the causes, the decline in food prices is a much-needed reprieve for consumers. It means that our grocery budgets may be a little less stretched, for now.

We’re finally seeing a change in the trend. And with any luck… it means food inflation has reached a short-term peak.