I was laid off from my day job at a car dealership in the Metro Detroit area in March 2009. This was during the depths of the Great Recession, when major auto manufacturers were actually going bankrupt.

The car industry in Metro Detroit in 2009? You almost couldn’t have picked a worse industry in a worse place at a worse time. But the night is darkest before dawn.

I picked myself up, dusted myself off, and devised a plan. A plan which would see me achieve financial independence/retire early – otherwise known as FIRE.

After losing my job, I never again wanted to find myself so dependent on an employer in order to put a roof over my head or food in my belly. And what’s the opposite of dependent? Independent.

Well, I moved to Florida later that year, got a new job after pleading with the service manager down there, saved, invested, and achieved FIRE in March 2016.

That’s six years after starting the journey toward FIRE, and seven years after originally losing my job. I went from in debt at 27 years old to financially free at 33 years old.

There are a lot of things that you have to do right in order to achieve something like this. But some things are especially important.

Today, I want to tell you about five things you should do if you want to successfully achieve FIRE. Ready? Let’s dig in.

The first thing you have to do in order to successfully achieve FIRE?

Make sure you really want it.

That’s right. It’s easy to look at FIRE and think it’s pretty cool and that you’d like to achieve it, too. However, it’s quite another thing altogether to want it with every fiber in your being. But this is the kind of desire that is necessary. Why?

It’s easy to point to the path you have to walk. It’s much, much more difficult to actually walk that path for years on end. You’re setting yourself up for a radically different lifestyle, potentially for the rest of your life. That takes a ton of commitment. And you have to have a determined, long-term mindset. Not everyone can do that.

So before you start down the path toward FIRE, be aware that it’s a multiyear journey.

It took me six years to go from start to finish, from in debt to financially free. And I was able to sustain a level of relentless intensity and focus that is rare. As such, it’ll take most people even longer. Let’s say it’ll take you 10 years. Can you commit your entire self to a 10-year plan? What if it’ll take you 15 years?

Can you stay on a path, totally focused, for 15 years? FIRE is achievable for almost anyone out there. But achievable doesn’t mean easy. It’s actually incredibly difficult. But if it were easy, everyone would have it. The fact that it was so difficult makes me treasure it even more. This is something you have to want with every cell in your body. So be sure that you do.

The second thing you have to do in order to successfully achieve FIRE?

Here we go again. Something that’s simple but difficult. Simple to say. Difficult to execute. Saving money is a lot like losing weight. We all know what to do. But passing up pizza is hard, right? Well, this is why my first point is so critical. Only those who really want FIRE are willing to routinely pass up the figurative pizza.

You shouldn’t be spending a little bit less. I mean, a lot less.

In order to achieve FIRE within a reasonable amount of time, you’ll have to plan on living on 50% or less of your net income. That implies a 50% net savings rate. How do you live on half of your take-home income or less? Well, you obviously have to get serious with the budget, radically alter your lifestyle, and spend a lot less than most people do. Don’t worry. I have a huge tip for you that will help.

Track every single penny that you spend.

I mean it. Every red cent. Almost nobody does this. And that’s why they spend so much and wonder why they have no money. Once you start tracking your spending, you’ll likely be surprised, and perhaps even appalled, about exactly how much you spend.

And this will both motivate you to spend less and inform you on which areas of your budget are wasteful. If you want the biggest “bang for your buck”, tackle the “Big Three” first – housing, food, and transportation. That’s probably where most of your money is going. And that’s where most of the fat can be trimmed.

The third thing you have to do in order to successfully achieve FIRE?

I see this false dichotomy out there in the personal finance space, where people argue between whether you should try to make more money or try to spend less money. Why not both? They’re not mutually exclusive endeavors. The thing about spending less, though, is that fine tuning the expense side of the budget is a bit of a one-and-done. Once you’ve got all of the fat trimmed, you’re basically on cruise control from there.

When I got a job again down in Florida in 2009, I was only making about $40,000 per year. Doesn’t sound like much, right? Well, let me tell you, after being unemployed for a while, I was incredibly thankful for that income. However, I also knew that it wouldn’t be enough to get me to the promised land within a decade. Even with taking a sledgehammer to the expenses, I needed to make more. The good news about both income and expenses?

They’re largely within your control. So I started showing up early, staying late, and aggressively competing with co-workers. I even made a reputation for myself. A place across town heard about me and offered me a job making even more money. Boom. I did the same thing over there and got promotions until I was making almost $60,000 per year in 2013. Here’s something else I did to make more money.

I built up a side hustle.

This is key. After all of that showing up early, staying late, and working doubly hard at the day job, what did I do? I then went home and worked some more.

I founded a blog called Dividend Mantra, which later spawned all kinds of online ventures, including our YouTube channel. A side hustle is strongly, strongly recommended.

First of all, the income you make from it basically drops straight down to your bottom line once you’ve got the expenses locked in. Second, it can greatly accelerate the time frame in terms of how long it’ll take you to achieve FIRE. Third, it can be part of the post-job lifestyle you enjoy after achieving FIRE and retiring from your main career.

The fourth thing you have to do in order to successfully achieve FIRE?

Invest intelligently for the long term.

This isn’t just investing. It’s doing so intelligently. And for the long term. Anyone can call themselves an investor today. And a lot of people do so. But being an investor who is successful 10, 20, 30 years down the road? Yeah, that’s different. I’ve been investing since early 2010. It’s been 12 years now. I still hold many of the investments I picked up 12 years ago, and I plan to continue holding them for another 12 years.

So how do you invest intelligently for the long term? 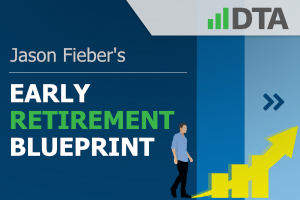 Okay. There’s more to it than I can get into in this short video. Suffice it to say, though, the investment strategy you employ and the assets you allocate capital to will make a tremendous difference in terms of the results you see over the years. I’m obviously a big advocate of the dividend growth investing strategy.

It’s a strategy I’ve been writing about, and personally using, for more than a decade. This strategy sells itself. It’s all about investing in world-class businesses that pay reliable, rising dividends to their shareholders.

And how do they fund consistently increasing cash dividends? By producing ever-more profit, of course, which happens when you sell the products and/or services the world demands.

In my opinion, dividend growth investing is perfectly suited for FIRE.

Well, what better form of passive income than dividends, which are an income source that have more passivity than anything else out there? Almost every single video we do is on dividend growth investing or specific dividend growth stocks, so make sure to follow the channel for more on all of that.

The fifth thing you have to do in order to successfully achieve FIRE?

This is so underrated. Very few people think about this. But it’s vital. We’re talking about not just achieving FIRE but successfully achieving FIRE. And I used that word on purpose. This is about maintaining it after achieving it. If you’re only running away from a job you dislike, you’ll probably find yourself unhappy on the other side. Because you must have something to run to. Look, there are plenty of unhappy rich people out there. There’s more to life than money. Likewise, there’s more to FIRE than money.

This is probably the hardest part of the whole equation.

That’s because it’s so personal. You can’t read a book and get the answers. It comes down to you, your life, your personality, your situation, your likes/dislikes. See, here’s the truth of the matter. Most people are used to being delegated to. They’re not accustomed to being the delegator.

But when you quit your job and eliminate the boss that delegated to you, you become the boss and get to delegate. And just like how you decide to allocate your capital will make a tremendous difference in terms of the results you see over the years, how you allocate your time will also make a tremendous difference in terms of your happiness and the ultimate success of your post-job FIRE lifestyle. But here’s a tip.

Build a side hustle that you can see yourself doing and enjoying after you quit your job.

This goes back to my earlier point. It’s why I said building a side hustle is key. After you quit your job, you’re going to have a lot of time on your hands. So when do you wake up? What do you do at 11 a.m.? What do you do at 3 p.m.? So on and so forth. Trust me. Anyone who is driven enough to achieve FIRE will not be happy just sitting around all day long.

The personality that achieves FIRE is the personality that will still need to be challenged and engaged after the job is gone. So my best advice here is to start building the post-job FIRE lifestyle long before you actually pull the trigger and quit your job, which will likely hinge around the side hustle you start up as a way to make extra money to save and invest toward FIRE.