Thanks to the shale revolution, the U.S. is in a much better place when it comes to energy than Europe.

Over the years, Europe has become so dependent on Russian energy that Vladimir Putin can freeze it in the winter, cook it in the summer and decimate its economy year-round.

European leaders never should have placed their people in such a situation.

But before those of us in the U.S. sigh a collective breath for not being in Europe’s shoes, I have a news flash for you… The U.S. has its own dire supply chain problem.

In fact, China is our sole supplier of all kinds of items vital to our economy, our military and our very lives!

If you don’t think that’s a major problem, then you haven’t been paying enough attention to the news.

China is pursuing a clearly defined “One China” policy that includes the reunification of Taiwan.

The “One China” policy states a preference for a peaceful reunification, but it doesn’t rule out the use of military force.

That puts the U.S. and China on a terrifying collision course.

Over the past year, on at least three separate occasions, President Biden has said that the U.S. will intervene militarily if China attempts to take Taiwan by force.

But Biden said what he said. Clearly, tensions have ratcheted up.

We are reliant on China for so many essential things – things that you simply cannot be reliant on an unfriendly nation for.

For example, China accounts for 80% of rare earth production and refining.

Rare earth metals are used as critical components in high-tech devices that are vitally important for both our economy and our military.

China also provides 100% of the natural graphite needed for batteries, produces 97% of the silicon wafers used in solar panels and houses 80% of the world’s lithium-ion battery recycling capacity.

And it only gets worse from there…

Pharmaceutical manufacturing has been offshored from Europe and the U.S. to Asia.

There are estimates that the U.S. imports virtually all of certain antibiotics and over-the-counter pain medications from China, plus a high percentage of drug treatments for depression, Alzheimer’s, HIV and other ailments.

Imagine if the supply of these essentials were cut off!

Plain as day, it is entirely unacceptable to rely on an aggressor state.

Our Chinese Problem Has a Mexican Solution

As American companies move to diversify their supply chains, Mexico will benefit big-time.

Mexico has several factors working in its favor, including its close proximity to the U.S., its access to ports, its highly skilled and educated workers, and its modern infrastructure.

For all these reasons, I first called on Mexican stocks (and currency) to outperform over the medium term in July 2021. I said the diversified iShares MSCI Mexico ETF (NYSE: EWW) was a sensible way to play the coming Mexican outperformance.

The iShares MSCI Mexico ETF has since outperformed the S&P 500 by 10%, just as I expected. 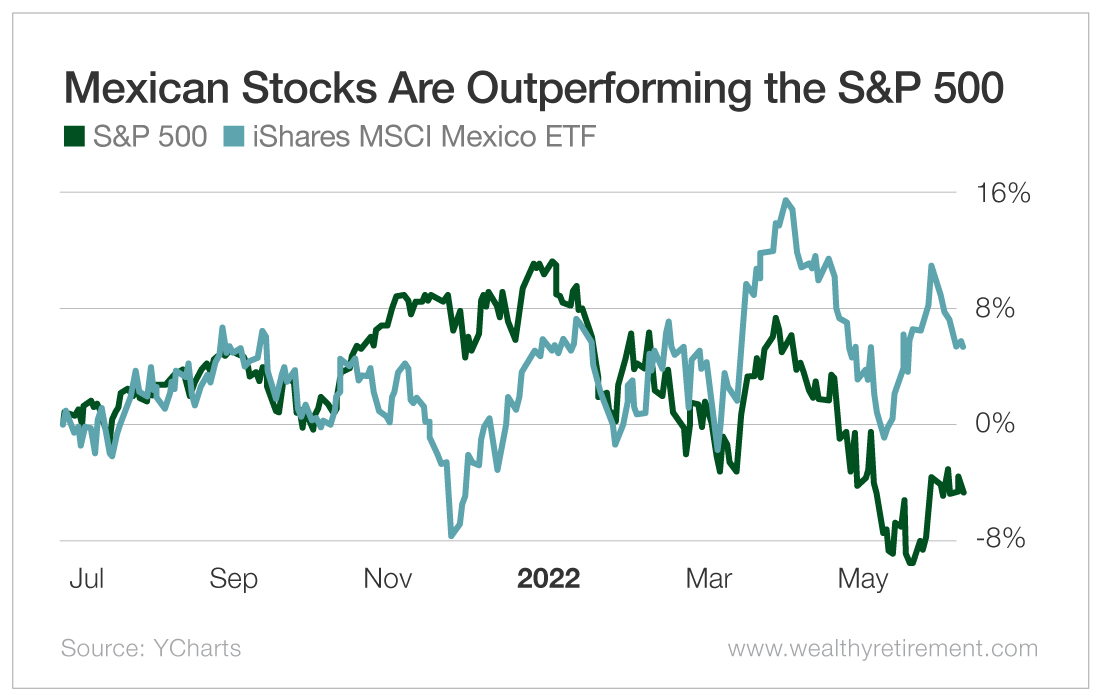 I still like Mexican stocks over the medium term.

Grupo Aeroportuario is one of three publicly traded managers of Mexican airports.

In total, the company manages 13 airports in Mexico and Jamaica, including in the cities of Guadalajara, Tijuana, Puerto Vallarta, Los Cabos, Kingston and Montego Bay.

For years, this has been a solid, steadily growing business. As Mexico’s economic activity increases, these airports are going to be getting busier.

From 2012 through the end of 2021, Grupo Aeroportuario doubled its earnings before interest, taxes, depreciation and amortization (EBITDA) from $230 million to $548 million.

Despite that incredible growth trend, we can currently buy shares of Grupo Aeroportuario for just 10.12 times last year’s EBITDA.

That’s a massive discount to the 20 times EBITDA that developed airport operators generally trade at.

It’s also less than the 15 times EBITDA that Grupo Aeroportuario has historically been most commonly valued at.

With this discounted stock, we can “ride” Mexico upward as it benefits from the reset of the American supply chain.