High-quality dividend growth stocks are like the golden geese that lay ever-more golden eggs. The golden geese, of course, are the world-class businesses.

These are the companies that, figuratively speaking, keep the world turning. They sell the products and/or services our global society demands.

The golden eggs are the dividends these companies pay out to their shareholders. Dividends are totally, completely passive income.

Today, I want to tell you about six dividend growth stocks that just increased their dividends. Ready? Let’s dig in.

The first dividend increase I have to tell you about is the one that came from Leggett & Platt (LEG).

Leggett & Platt has been a lock for mid-single-digit annual dividend raises for years and years. When inflation was only in the low-single-digits, this was good enough to slightly increase one’s purchasing power every year. However, with inflation so high now, these mid-single-digit dividend raises have lost a bit of their umph. Still, it’s difficult to complain about getting a bump in your income. Especially when it’s passive income. And especially, especially when you didn’t do anything to get that bump in pay, other than simply hold stock.

This is the 51st consecutive year in which the engineered components company has increased its dividend.

With more than 50 straight years of dividend increases, Leggett & Platt is a Dividend King. This most recent dividend increase was right what you’d expect – their 10-year DGR is 4.2%. Like I said, this company has been a lock for this. Now, while the dividend growth isn’t huge here, the stock does compensate you for that with a high yield. 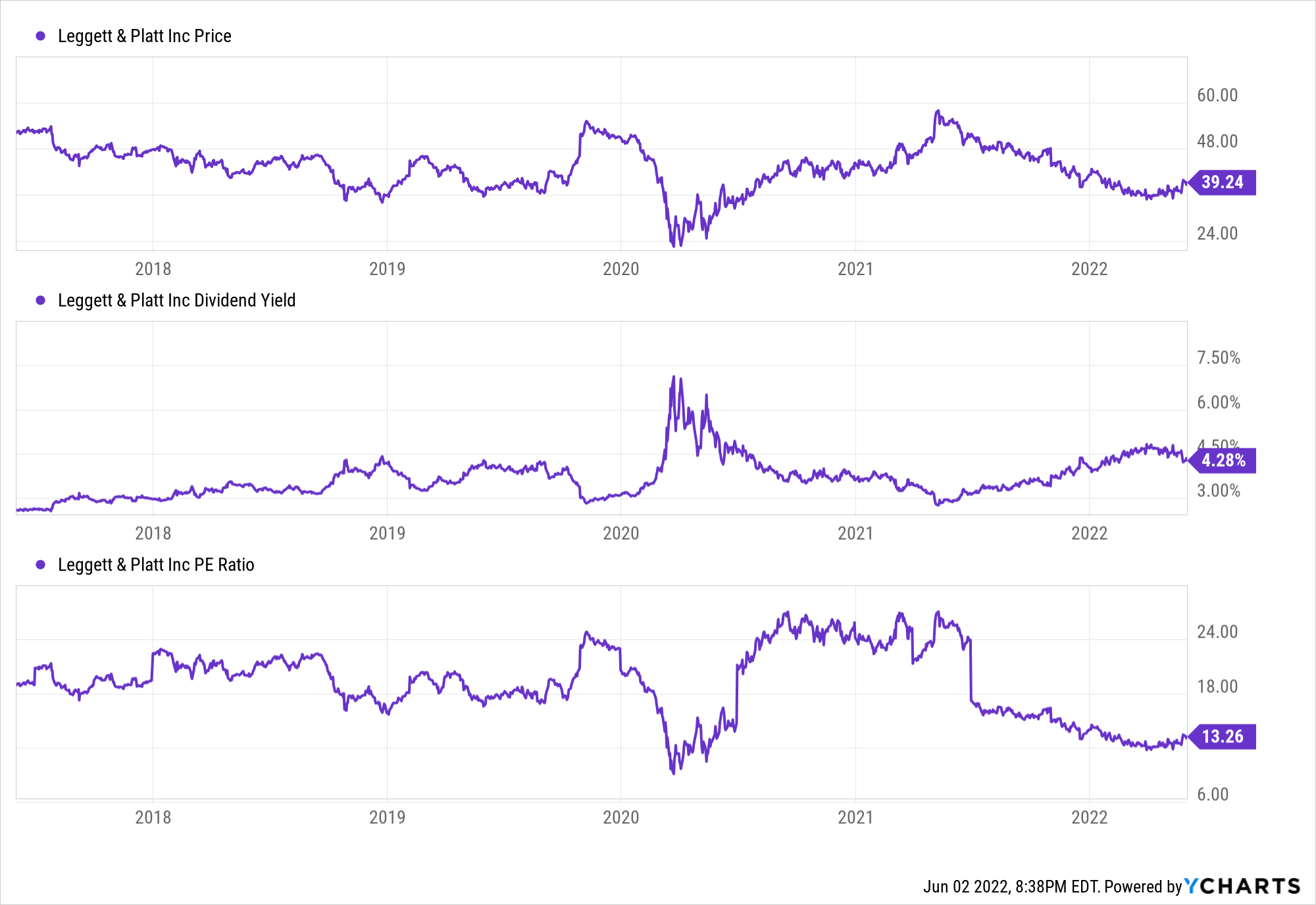 The stock’s yield is 4.4% here, which is three times higher than the broader market’s yield. And even after this most recent dividend increase is factored in, the payout ratio is still just 59.5%. As such, I’d be expecting another mid-single-digit dividend raise in about a year.

This stock is nearly 30% off of its 52-week high. And it wasn’t even all that expensive at the 52-week high. But it looks downright cheap now.

All of the basic valuation metrics here are extremely undemanding. And this is a stock that rarely has a demanding valuation. It’s just that it’s become even more reasonable. The P/E ratio, for instance, is 13.4. That aforementioned 4.4% yield? Yeah, it’s 80 basis points higher than its own five-year average. This is often a cheap, high-yield dividend growth stock. But it’s even cheaper and offers an even higher yield than usual. Take a look at it, if you haven’t already.

The next dividend increase we have to talk about is the one that was announced by Lowe’s (LOW).

Lowe’s just increased their dividend by a whopping 31.3%.

Boom. Mic drop. This golden goose just keeps popping out bigger golden eggs. The business is a fantastic home improvement retailer. But the stock ought to be known as a fantastic portfolio improver. Because I can’t imagine any portfolio not being better off with Lowe’s in it. This is one of the most reliable dividend growers on the planet.

This marks the 60th consecutive year of dividend increases for the home improvement retailer. 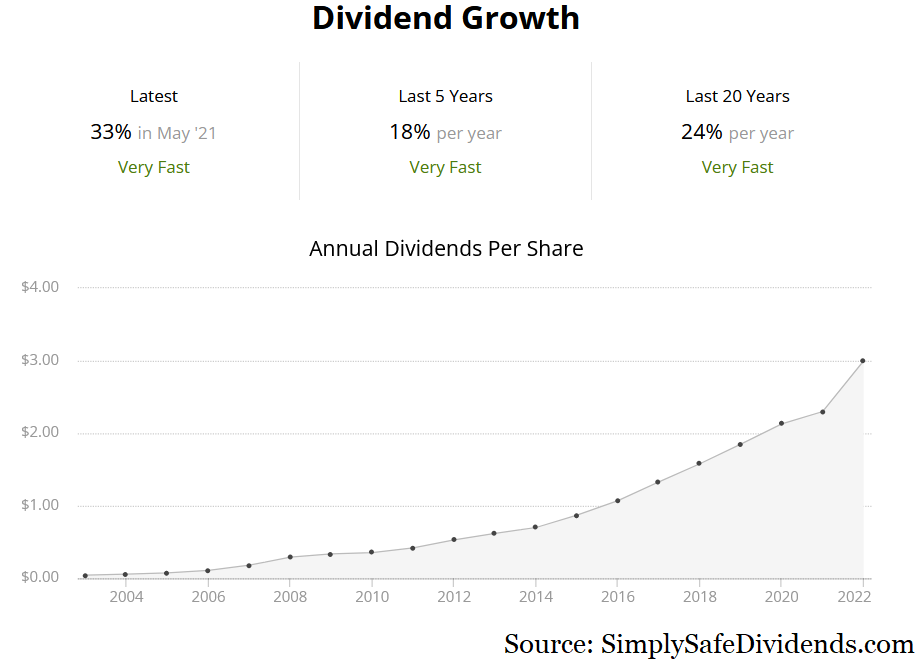 The 10-year DGR is 18.8%, but recent dividend increases, including this one, have been way higher. The stock also yields a respectable 2.1%. And with the payout ratio at 34%, even after this monstrous dividend increase, the company’s dividend is as certain as it’s ever been.

What’s better than a sale at Lowe’s? A sale on its stock.

That’s right. I would argue the company’s stock is on sale right now. In fact, I did make that very argument in a video we recently published, which analyzed the business and estimated intrinsic value at approximately $240/share. Keep in mind, that valuation was put together before the company came out with this whopper of a dividend increase. I think the shares are even more appealing now. With shares currently trading hands for about $200/each, this Dividend Aristocrat looks like it’s priced below what it’s worth.

Next up, let’s have a quick conversation about the dividend increase that came courtesy of Mid-America Apartment Communities (MAA).

Another golden goose increasing its golden egg output. How can you not love dividend growth investing? How can you not love passive income that grows all by itself? Inflation is going gangbusters right now. A big part of that is, of course, rent. Rent is up huge YOY. Well, this company – a REIT that owns and manages apartments – obviously benefits from that. Inflation is a thing where I take the… “If you can’t beat it, join it..” mentality. Investing in companies raising their prices and seeing their revenue and profit grow is a great way to join in.

This is the 13th consecutive year of dividend increases for the real estate investment trust.

What made this most recent dividend increase so special is the size of it. The 10-year DGR is 5%. Solid, yes. But nowhere near 15%. With rent a “sticky” thing that’s difficult to bring down once it’s up, and with inflation being a genie that’s difficult to put back in the bottle, this could be just the start of a faster dividend growth rate from the company. The stock yields 2.7%, so you’re getting some good yield here. With a payout ratio of 68.4%, based on midpoint guidance for adjusted funds from operations per share for this fiscal year, the dividend is easily covered. 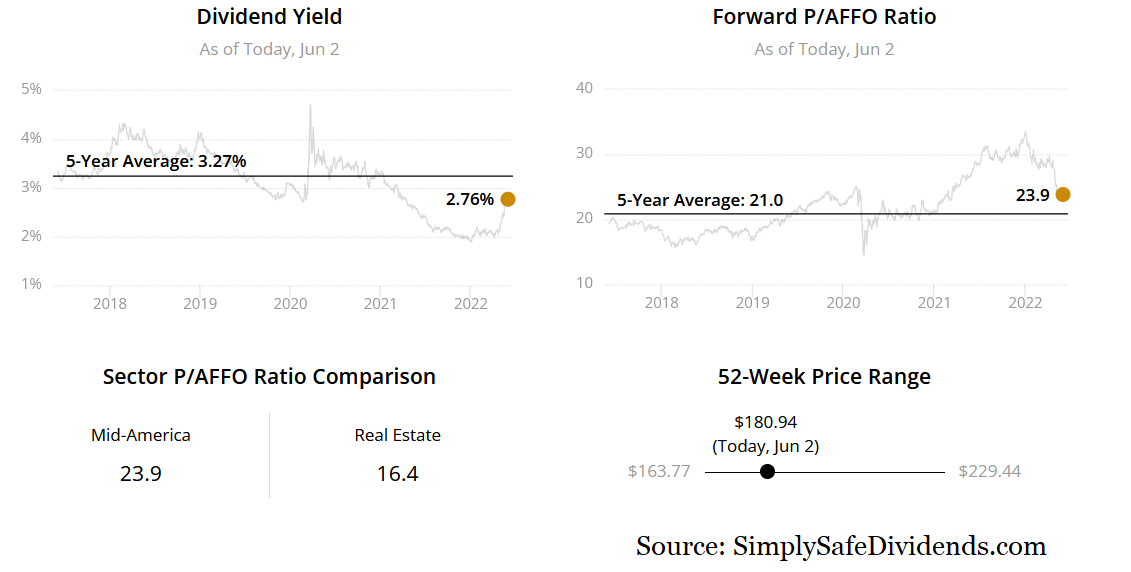 This stock is down nearly 20% this year. It’s not super cheap. But that drop has created a more acceptable valuation.

Let me be clear. This isn’t a stock I’d be rushing out to buy. I think the time to do that was in the summer of 2020. But it has gone from egregiously valued to something more along the lines of what’s in the realm of reasonable. The recent drop has definitely made it more interesting. The P/CF ratio is 23.6. Its five-year average is 19.5. The thing is, this REIT keeps bumping up the results every quarter. So even if it’s not super cheap right now, it could quickly grow into its current price. Again, not a top idea for me. But I think it’s worth at least putting on the radar once again after nearly a year of outright expensiveness.

The fourth dividend increase I want to share with you is the one that was announced by Medtronic (MDT).

Medtronic just increased their dividend by 7.9%.

This is the 45th consecutive year in which the medical device company has increased its dividend. 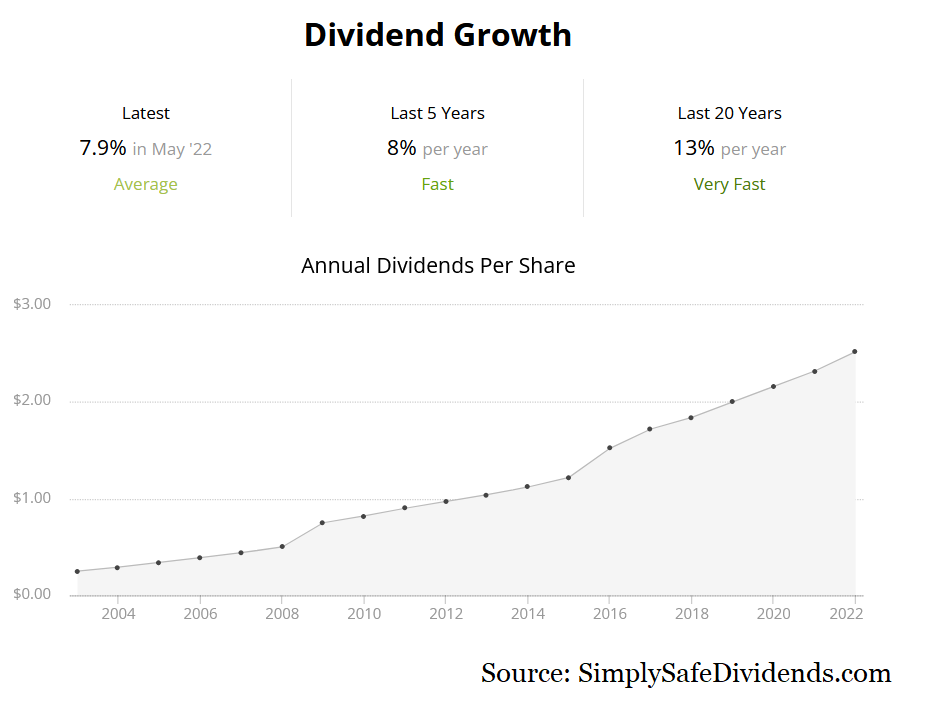 You want to know that, no matter what, you’re almost guaranteed to get your dividends and your dividend raises. The 10-year DGR is 10%. And the stock yields 2.8%. These are all very solid dividend metrics. Also, the payout ratio is only 48.7%, based on midpoint guidance for this fiscal year’s adjusted EPS.

I’m shocked by how weak this Dividend Aristocrat has been. It looks very undervalued to me.

It’s nearly 30% off of its 52-week high. And this bloodletting has led to what I think is a very attractive valuation. Every basic valuation metric here is well below its respective recent historical average. We actually put together a full analysis and valuation video on Medtronic late last year, and the estimate for fair value came out to almost $124/share. The stock is currently hovering around the $99 mark. So I see a lot of upside here on what is a great business with excellent long-term prospects. Don’t forget about it.

I now have to highlight the dividend increase that came in from Northrop Grumman (NOC).

10.2% more money. For doing almost nothing at all. Just think about that. I mean, I remember when I still had a day job. Trust me, it was not easy to get a 10% pay raise back then. Yet Northrop Grumman shareholders got exactly that – and all they had to do was hold shares. That’s it. No showing up early, staying late, fulfilling quotas, attending meetings, etc. You’ve gotta love it.

The aerospace and defense technology company has now increased its dividend for 19 consecutive years.

The 10-year DGR is 12.3%, so this most recent dividend increase isn’t that far off the mark. And with geopolitics really heating up this year, Northrop Grumman’s dividend could easily get back to that more customary 12% growth area very quickly.

The stock’s current yield of 1.5% is basically in line with both its own five-year average and the broader market’s yield, which is good. With the payout ratio sitting at a lowly 19.1%, I expect Northrop Grumman to continue handing out sizable dividend increases for many years to come.

This stock has gone on a run – up 22% this year alone. A pullback would be nice. But I also think it’s buyable here. 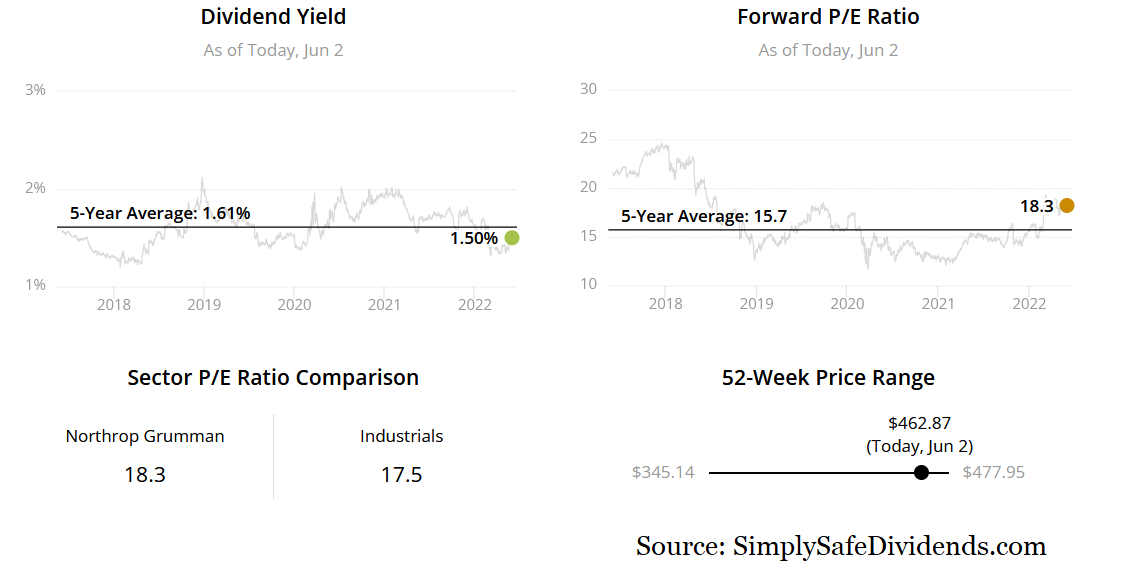 Would it be top of mind at this very moment? Maybe not. But the company is firing on all cylinders, the dividend just got boosted by more than 10%, contracts keep coming in, the backlog is sitting at $75 billion, and geopolitics are such that this company’s products and services are on everyone’s radar (no pun intended). Like I said, the stock’s current yield is right there with its own five-year average.

So today’s buyers aren’t accepting some kind of bad deal, yield-wise, relative to what they’ve typically accepted, on average, over the last five years. Based on midpoint guidance for this fiscal year’s transaction-adjusted EPS, the forward P/E ratio is 19.0. The stock’s five-year average P/E ratio is 19.3. I don’t see anything crazy here in terms of the valuation. It’s definitely a name to consider right now.

Last but not least, let’s talk about the dividend increase that was announced by Union Pacific (UNP).

Choo-choo. All aboard to Dividend Town. A 10.2% dividend increase is always awesome. But what makes this increase particularly awesome is the fact that Union Pacific just increased their dividend by 10.3% back in December. So the dividend is actually up by 21.5% on a YOY basis. Now that’s what I’m talking about.

This is the 16th consecutive year of dividend increases for the railroad holding company.

All Union Pacific does is deliver outstanding dividend increases right on schedule. The 10-year DGR is 16.1%, so we shouldn’t be surprised to see double-digit dividend growth yet again. The stock also yields 2.3%, which is actually plenty of yield when you’re also getting this kind of huge dividend growth. By the way, that yield is 40 basis points higher than its own five-year average. And the payout ratio is 49.4%, which perfectly balances retaining earnings for growth against returning cash to shareholders. Good stuff across the board.

The stock’s 10% pullback this year may have created a buyable opportunity. 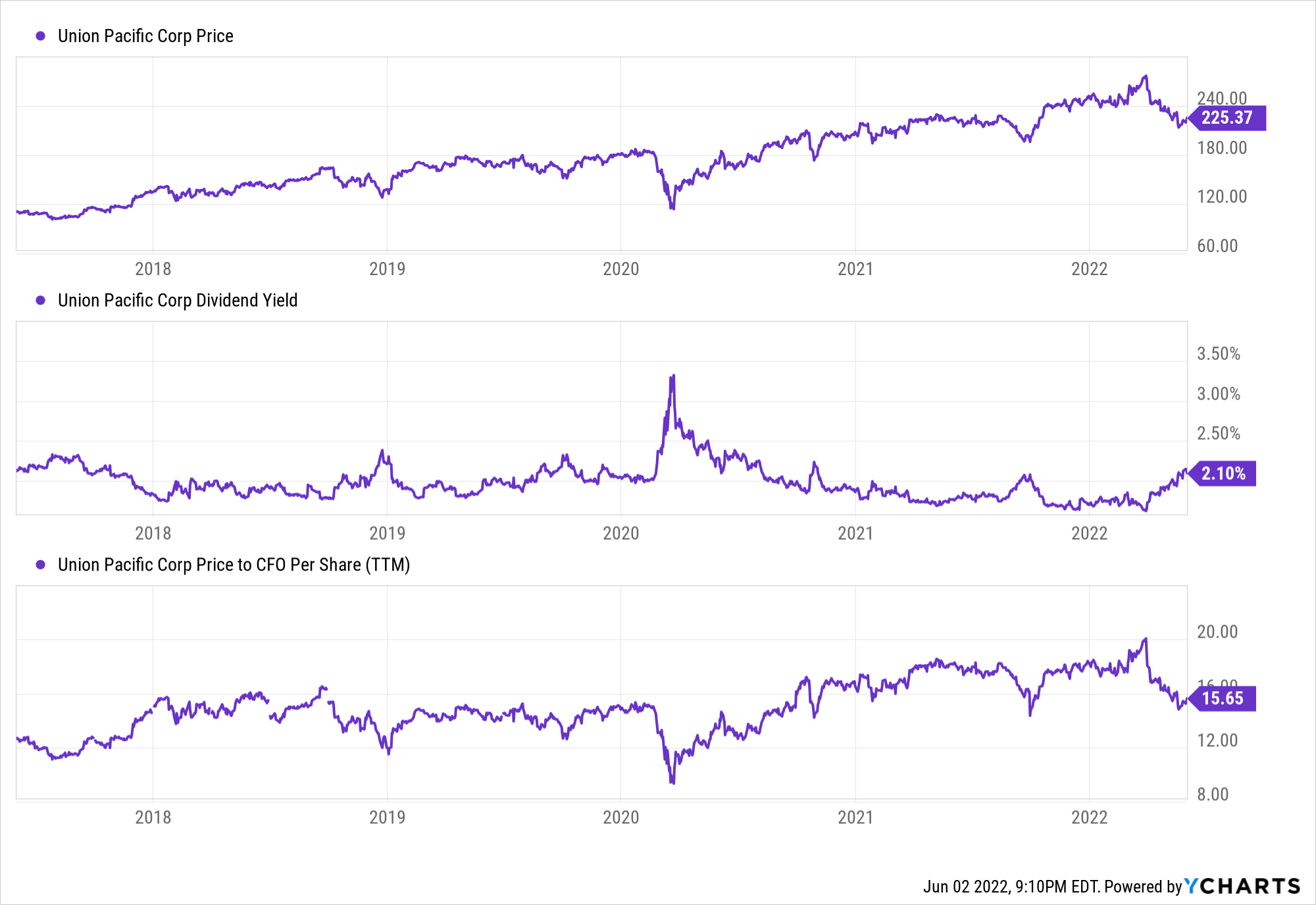 Indeed, when you look at every multiple here, the word I keep coming around to is “fair”. It looks fairly valued across the board. For example, the P/E ratio is 21.1. Its five-year average? 20.2. The current P/CF ratio of 15.5 is only marginally ahead of its own five-year average of 15.0. And, you know, any kind of rebasing of industry in the US from de-globalization would benefit a railroad company like Union Pacific.

So that’s a looming potential catalyst for additional growth that may or may not materialize. Just something to think about. In the meantime, this is a long-term winner. The stock has doubled over just the last five years alone. Long-term dividend growth investors would be wise to keep a close eye on Union Pacific and think about jumping on before it leaves the station.