If you missed this news, I don’t blame you. There’s a lot going on these days…

The financial markets are a mess. The U.S. economy is slowing. And war is still raging in Europe.

So if you didn’t notice the incredible rally in the U.S. dollar, I get it.

Currencies are almost always “boring.” And in interesting times like these, they’re near the bottom of the list for most investors.

What’s happening with the dollar today is incredible, though. It has broken out to a 20-year high. And while that might sound trivial, it actually has big implications…

Specifically, there’s a certain group of investments you’ll want nothing to do with until the trend changes.

The dollar has been moving higher since just after the COVID-19 pandemic took hold.

The U.S. Dollar Index, which tracks the dollar versus a basket of other major currencies, bottomed at around 90 in May 2021. It then went up and up through the end of the year, closing at around 96.

That 7% gain might not seem like much, but currencies tend to move glacially. So a 7% move in less than a year is actually big news. And since then, things have gotten even crazier.

The dollar jumped another 9% to its peak earlier this month. And it broke out to a 20-year high in the process. Take a look… 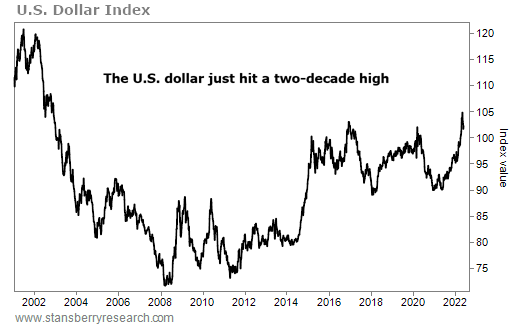 The dollar has fallen slightly in recent weeks. But overall, the trend is still up. And that has big implications for investors.

Most importantly, this is a major headwind for foreign stocks…

For example, if you’re a U.S. investor who owns European stocks, a falling euro cuts into your gains. If those stocks rise 10% but the euro falls 10%, you’ll be sitting flat in U.S. dollar terms.

The opposite is also true. The dollar staged a massive rally from mid-2014 through late 2016. It jumped more than 25% over that time. And emerging market stocks crashed… They lost more than one-third of their value.

We’ve seen a similar loss since the dollar bottomed last year. Emerging market stocks are down more than 30% since then.

Simply put, a rising dollar means stocks outside the U.S. are facing an uphill battle.

We don’t know for sure that the trend will continue. But until we see a more meaningful fall, stocks outside the U.S. are a group you’ll want to avoid.