Warren Buffett is a personal hero of mine. And I mean that in both life and money. But we’re here to talk about money, right?

Buffett has posted a 20% compound annual rate of return over the course of more than 50 years. And he’s built up a $100+ billion personal fortune in the process.

To say he’s been incredibly successful is underselling it. He’s arguably the GOAT of investors. And so when Buffett makes a move, the world pays attention.

Well, Buffett has been making big moves recently. He’s been betting billions of dollars on one particular area of the market.

Today, I want to tell you about the stocks in one area of the market that Buffett has recently been loading up on. Ready? Let’s dig in.

The big bet Warren Buffett is making comes down to one word.

Sure. We can expand on it – oil & gas, energy, etc. But it’s clear that Buffett believes the price of oil is headed higher. And not just a little higher for a few months. Meaningfully higher, for an extended period of time. 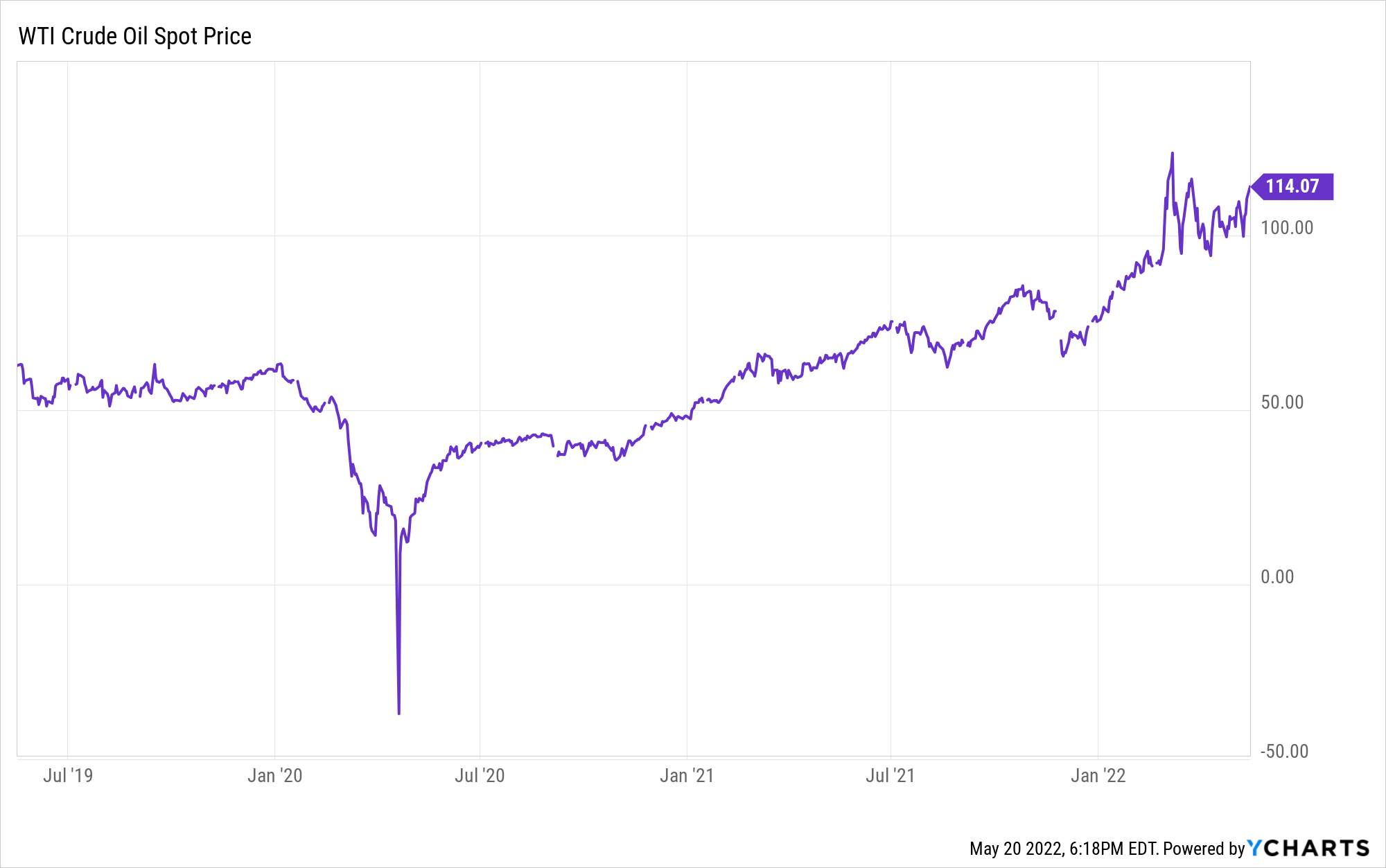 After all, oil went to negative pricing for the first time in history during 2020 after the pandemic caused all kinds of distortions in various aspects of the market and society at large. A barrel of oil was literally worth less than $0 for a temporary period of time about two years ago. Now? WTI crude is over $110/barrel. Oil pricing has explosively gone parabolic. We’re near multiyear highs here.

A variety of circumstances, including self-inflicted injuries, have heaped this upon society.

I can tell you that I’ve been invested in the energy space personally for more than a decade now. And I’ve witnessed a lot of vitriol being thrown the way of the traditional energy complex.

Companies across oil & gas have been villainized. Deserved? Maybe. Maybe not. Either way, it’s been politicized to the point of real-world consequences, including capital outflows and underinvestment in traditional energy supply in favor of renewables.

Management teams at major energy companies have heard the criticism loud and clear.

They have really clamped down of late, becoming far more efficient and focused with capital. Because of uncertainty regarding the ROI of projects that are both large in scope and long in duration, capital expenditures have come down over the last decade at many of the supermajors – despite the world growing larger and, arguably, needing more traditional energy supply.

This leads to a constraint in oil & gas supply.

That’s coincided with demand suddenly spiking from a post-pandemic reopening of the global economy. Adding in war between Russia and Ukraine only exacerbates the structural imbalance, as Russia has historically been a major supplier to the world’s energy market.

Society got religion. A lot of people suddenly remembered that the world still largely runs on oil & gas.

And now the political and market posturing has become, shall we say, less hostile toward traditional energy companies. But what does this have to do with Buffett and oil pricing? Well, quite a bit. See, the problems that have led to high pricing in oil are deep-seated and unlikely to be rectified quickly. You can’t just suddenly flood the market with supply that doesn’t exist.

Here’s the crux of the matter. An advantageous trifecta is suddenly present in the industry. In my opinion, Buffett sees something similar to what I’m seeing, and it’s why he’s all over oil & gas right now.

One, we have high prices that can’t be cured quickly.

Like I said, the current state of the entire energy complex has been years in the making. It doesn’t unwind in a matter of months. Sustained high pricing leads to higher sales, profits, and dividends across the entire sector.

Two, we have an environment that is more favorable to these companies.

The current paradigm is simply more conducive to doing business. There’s suddenly more capital – political and otherwise. It’s goodwill that hasn’t been around in years.

Three, we have more focused operations that prioritize shareholder returns over growth at all costs.

You might say that being stymied has been a boon to these companies and their shareholders. If it’s “all systems go”, it’s easy to be wasteful with capital. Instead, these companies have been forced to cut back on CapEx, be ultra efficient with projects, and return capital back to shareholders in the form of buybacks and dividends. We all know that Buffett loves buybacks and dividends.

I’m sure Buffett has done the math on this. And he’s jumping in with both feet. 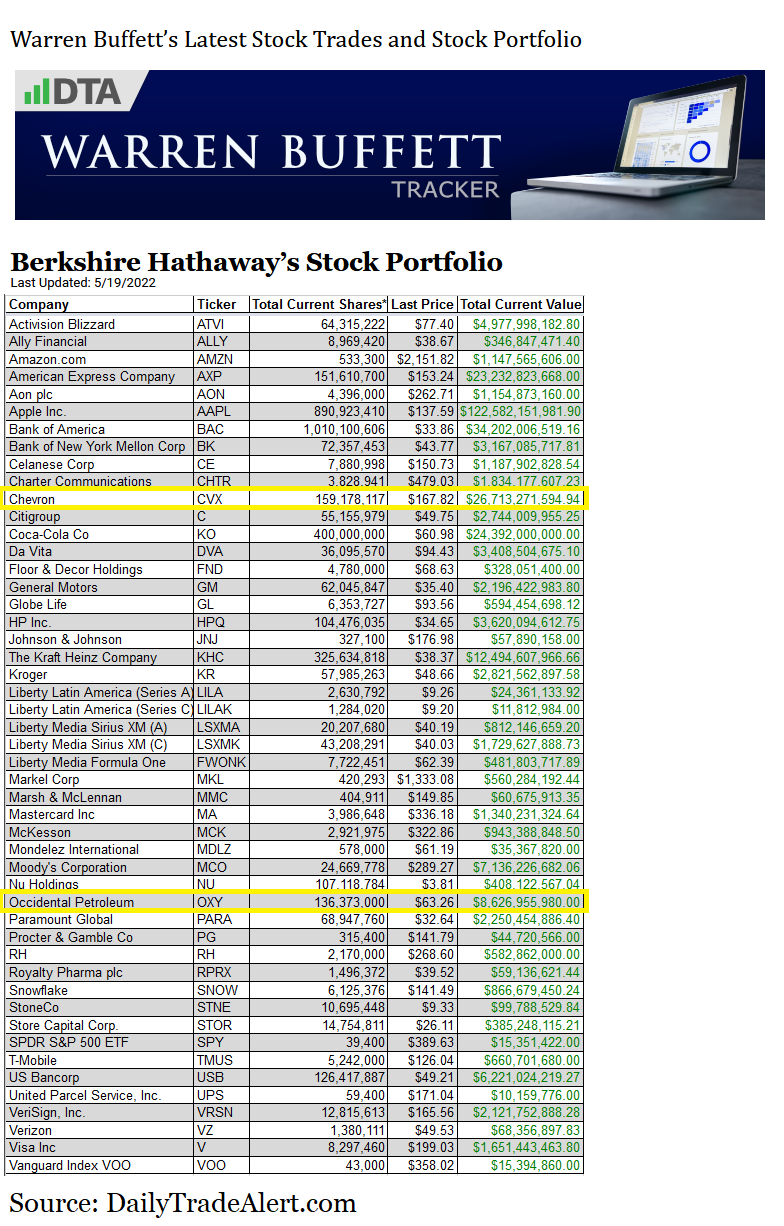 Through the $300 billion common stock portfolio he oversees at his conglomerate Berkshire Hathaway, Buffett has significantly increased his exposure to traditional energy this year. And he’s primarily expressed that bet through two specific stocks: Chevron Corporation (CVX), and Occidental Petroleum (OXY). Both are major traditional energy companies, focused on hydrocarbon exploration and production.

Indeed, Berkshire Hathaway increased its stake in Chevron alone to more than 159 million shares during Q1 2022. That’s up from 38.2 million shares at the end of Q4 2021. So we’re talking a quadrupling of the bet on Chevron in only one quarter. This is massive, even by Buffett’s lofty standards.

The Chevron position alone is worth over $27 billion.

Berkshire Hathaway’s bet on Occidental, which comes in at over 143 million shares, is worth almost $10 billion as I speak. Taken together, these two investments alone have a combined market value of over $37 billion here.

Combined, we’re looking at one of the largest capital commitments Berkshire Hathaway has made in the entire common stock portfolio. Warren Buffett is betting big on oil right now. And I think he’s making a good call. 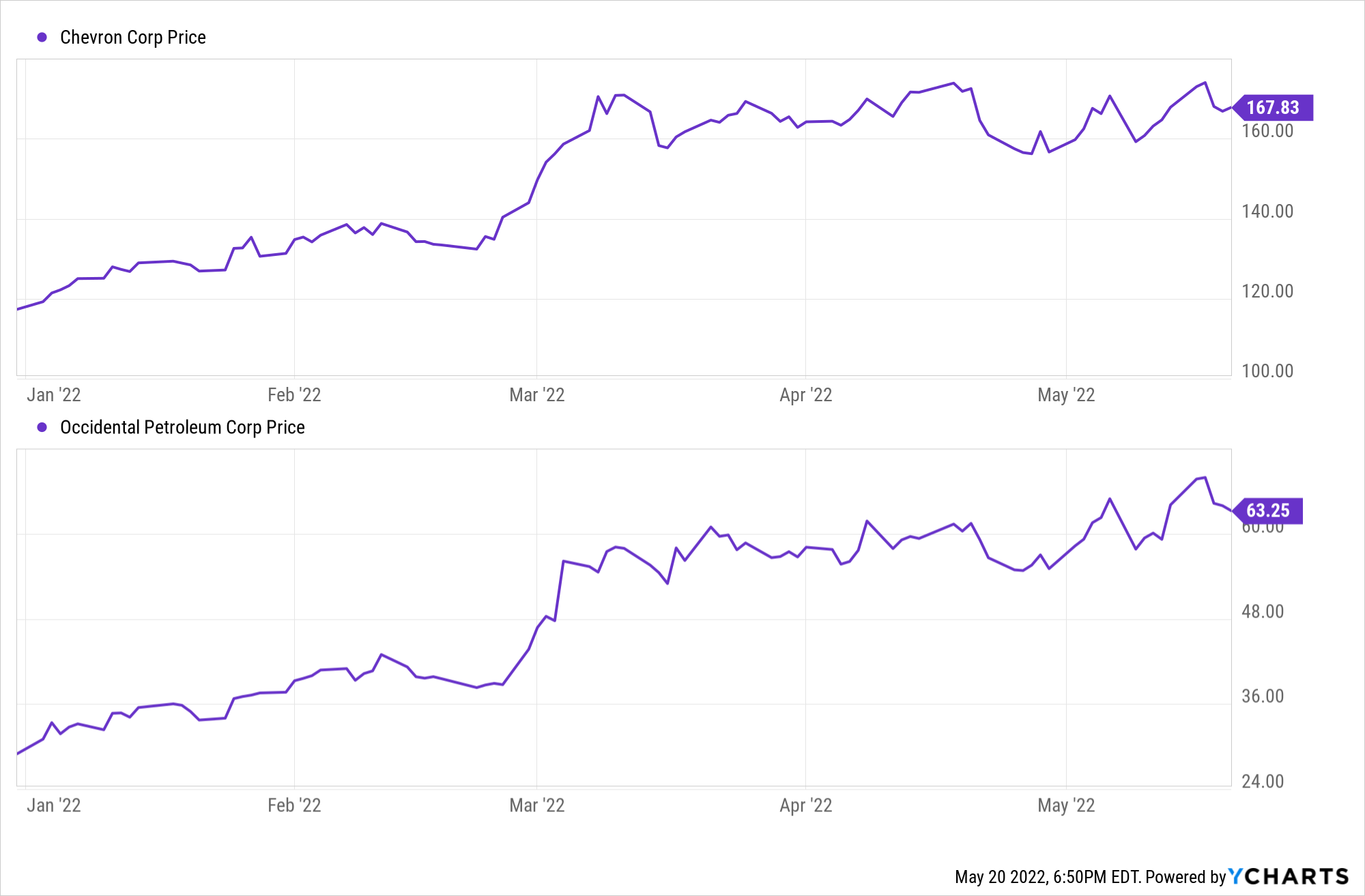 Like I said earlier, these companies are operating within the most favorable environment I’ve seen in my 10+ years of investing. Conditions have done a complete 180 from the low prices, excessive spending, and hostility only a few years ago to the high prices, disciplined spending, and goodwill in 2022. I don’t think I’ve ever seen anything like it. Look, I get it.

The world wants to eventually move to renewables. We need to eventually move to renewables. I mean, there’s a finite supply of hydrocarbons on Earth. But, you know, when people are paying $6/gallon for gas in California, and when people are having trouble heating their homes in Germany, reality hits. And the reality is that the world still largely runs on hydrocarbons.

Well, that’s up to you. We covered Buffett starting to load up on Chevron last year, when the shares were selling for under $120/each. It wouldn’t have been a bad idea to follow him back then, as Chevron shares are now selling for over $170/each.

Both Chevron and Occidental shares have gone on huge runs this year, but neither looks terribly expensive. Plus, the entire industry is looking at structural advantages, which should result in higher valuations than what was permitted before. It might not be a bad idea to follow Buffett once again.