Prices marched higher. Volatility was nonexistent. The biggest decline for the year was 5%. And overall, stocks soared 29% in 2021.

This year… it has been a bit different.

We started with the first correction in two years. Then we got an 11% rally in just two weeks. And now, stocks have made lower lows… and are flirting with bear market territory.

Now, everyone’s wondering if this is the start of a major crash. But even if it isn’t, we’re grinding through a volatile, painful market.

After last year’s steady gains, it doesn’t feel great. And it sure feels abnormal compared to the long bull run of recent years. This is nothing new, though.

It might not feel like it, but it has happened several times during this great bull market… most recently in 2018. And as I’ll share today, there are two major positives of a market like today’s…

This year is looking a lot like 2018. That year, stocks peaked in January… fell double digits in record time… quickly regained most of the losses… then retested their lows in the coming months.

That retest led to a major rally. Stocks hit new highs by August. But then, a much worse decline set in. Stocks nearly hit the 20% bear market level by year-end. And investors were as bearish as they had been in years.

This time around, the sell-off happened more quickly. We’re already nearing a bear market. And like 2018, this period has been personified by lots of bad headlines… manic market moves… and emotional highs and lows from investors.

This isn’t a fun market environment. But it does have two positive side effects… And they should push prices higher once the dust settles.

In 2018, the S&P 500 Index fell 4%. There were a lot of ups and downs through the sideways market, but the overall loss was minimal. Despite that, the market’s valuation fell by 22%.

It happened because earnings were growing… a lot. They increased 18% that year. So the price-to-earnings (P/E) ratio took a slightly smaller price and divided it by much larger earnings. And it fell dramatically as a result.

We’re in a similar situation this year. Analysts have cut earnings expectations as recession fears grow. But despite that, they still expect 18% growth in 2022. And as earnings move higher, valuations are going to fall.

What’s crazy is that this has already been happening. Stocks were up big last year, but earnings far outpaced those gains. That means the P/E ratio was already declining. And if the trend continues, we could be looking at the lowest valuations in years by the end of 2022.

A painful market chews up investors and spits them out. The swings in prices lead to emotional highs and lows. And a lot of folks simply can’t take it.

The end result is disdain for the market. Folks start to feel like the gains never stick… So there’s no point wasting their money. That attitude was plain as day in 2018…

The American Association of Individual Investors’ (“AAII”) weekly survey shows it. It asks individual investors if they’re bullish, bearish, or neutral on stocks over the next six months.

Bearish readings were at a multiyear low to start 2018. Times were good, and investors were optimistic. But that quickly changed.

Investors got more and more bearish as the brutal year played out. And by the end of 2018, bearish readings hit a five-year high. Take a look… 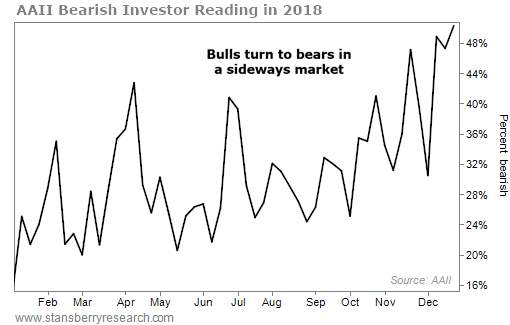 The same situation has played out in recent months. The AAII bearish reading was at a multiyear low last June… But it has been on the rise ever since.

At the end of April, it hit a level not seen since March 2009… the market bottom during the global financial crisis. And you can bet that investors will get even more frustrated if this painful market persists.

Again, this kind of market isn’t fun. It has already been a roller coaster of a year. And that can surely continue. It isn’t all bad, though…

If the side effects of a painful market are low prices and bearish sentiment, you can guess what follows… big gains.

That was enough for stocks to double in just three years.

In the investment world, the bad times lead to good times. And stocks give us the opportunity to make incredible long-term gains because of the volatility we’re experiencing today.

For now, you simply need to ride it out, survive, and be ready to profit on the other side.