Investors have finally started voting with their wallets…

Despite a rocky start to the year, folks didn’t bail on the market. Instead, they continued to pour money into stocks in the first quarter.

The “buy the dip” strategy has paid off for more than a decade. And investors used it as stocks faltered at the beginning of 2022. That has changed now…

In April, they pulled tens of billions of dollars out of U.S. stock mutual funds and exchange-traded funds (“ETFs”).

It’s a big change versus previous months. And when you combine it with investor activity in bonds, it shows us the most extreme fear since the height of the pandemic.

Getting a read on investor sentiment is tough. One good way to do it is by simply asking investors. That’s not perfect, though. People have a history of saying one thing and doing another.

Instead, if you really want to get inside their heads, watch what they do with their money.

Surveys show that folks have been bearish throughout 2022. But despite that negative sentiment, they kept pouring money into stocks…

That’s according to data from the Investment Company Institute (“ICI”). ICI is an industry association that also compiles data on mutual funds and ETFs.

ICI reports that investors poured $72.9 billion into U.S. stock funds in the first quarter. But it didn’t last long. They pulled well over half that amount back out last month. 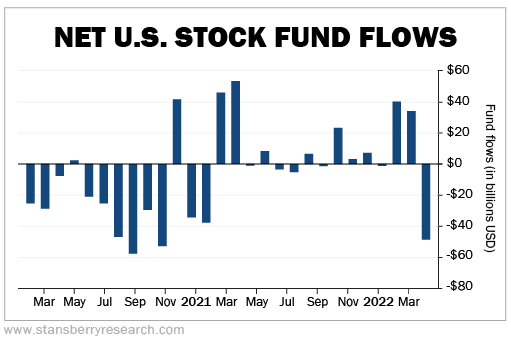 Last month’s total U.S. stock outflows were $48 billion. That’s the first time we’ve seen large outflows since January 2021. And as the chart shows, investors only pulled more money out of stocks during a couple months in 2020.

The chart doesn’t tell the full story, though. That’s because bonds are crashing this year, right alongside stocks. And given that situation, it’s no surprise that investors are pulling money out of bonds, too.

The chart below shows the combined flow of U.S. stock and bond funds. And this is where the real craziness appears…

You can see that investors pulled nearly $81 billion out of combined stock and bond funds last month. That’s the largest move since March 2020, during the height of pandemic fear.

It’s also a unique phenomenon, since investors tend to sell stocks and then move their money into bonds. That’s not happening today.

You’ll notice that the March 2020 outflows still dwarf today’s. We saw absolutely massive bond outflows back then. Those reversed in a big way over the next few months, though. Investors poured all of those outflows – and a lot more – back into bond funds by year-end.

Either way, investors have finally put their money where their mouths are. Sentiment readings have shown fear all year. And in April, folks finally started pulling money out of the market.

It’s not a sure sign that the bottom is here. But investors tend to give up near market bottoms. And that’s happening now.

I’ll be watching flows closely to see whether this trend continues or not. And as always, we’ll want to wait for the trend to turn around before getting back into stocks.