These victims are down another 17% since January…

Investors were trying to capture what seemed like incredible value. But they were missing a key factor…

I first wrote to you about this situation in the [February 1] issue of DailyWealth. Some of the biggest companies in the world were trading at dirt-cheap prices…

I’m talking about a 70%-plus discount to the S&P 500 Index. That’s darn cheap. And it was enough to lure in the crowd.

That’s not how assets hit bottom, though, as I explained back then. Stocks tend to turn around only after the crowd takes a beating…

Investors can’t stomach the possibility of more losses. So they jump ship… swearing to never return. Then, when there’s no one left to sell, a turnaround can finally take place.

The crowd was still bullish on this group of stocks in January. But today, investors are finally crying uncle. And that’s a sign that we’re getting closer to a bottom in this basket of stocks.

Investors were “all in” on Global X MSCI China Financials Fund (CHIX) in January.

CHIX holds a basket of large Chinese banks. These businesses aren’t just large relative to China’s market… The top players are even bigger than the largest U.S. banks based on assets.

These are the big players in China’s financial system. Yet at the end of January, CHIX was trading at a price-to-earnings (P/E) ratio of just 5.7.

The lower the P/E ratio, the cheaper the investment. For comparison, the S&P 500 was trading at a P/E of 23. So China’s big banks were valued at a 75% discount to the U.S. market.

You can see why investors were trying to snatch up shares for cheap. But again, the crowd was already all in on this trade. Shares outstanding for CHIX were at the highest level they had been since at least 2010. Take a look… 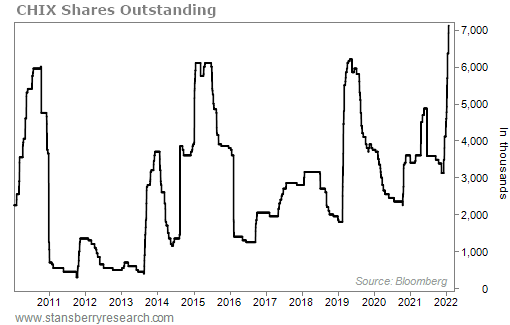 Funds like CHIX can create or liquidate shares based on demand. So a rising share count implies rising demand. A falling number of shares suggests that investors are losing interest.

As I showed you in January, there were three other cases where the crowd was extremely bullish on CHIX since 2010. And each time, we saw double-digit losses in the stock over the next year.

Well, sure enough, the stock is down another 17% since then. We were right… Buying with the crowd turned out to be a terrible idea, despite the value.

Things are changing though. The recent pain is becoming unbearable. And the crowd is finally heading for the exits. Take a look… 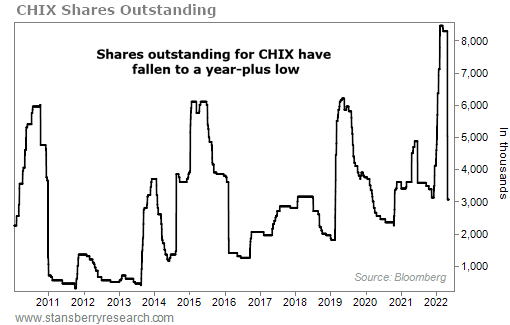 That’s because the trend in CHIX’s prices is still down. We always want to see prices turn in our favor before buying. Downtrends can always last longer than you expect. And buying against the trend hardly ever works in your favor.

If the pain continues, more investors will give in. When the crowd is out – and the selling is over – that’s when the turnaround can happen.

Today, we are seeing investors give up on a dirt-cheap asset. That will eventually change this value trap to a great value opportunity.

Once the trend turns higher, CHIX will likely start a much bigger rally. Until then, avoid the value trap and wait for the uptrend to return.