What a year 2022 has been. And we’re not even halfway done. Certain indices have entered bear markets, while the S&P 500 is well into correction territory.It’s ugly out there. Or is it?

If you’re young and still accumulating shares, this is exactly the kind of environment you want. Who wants to pay higher prices for their stocks? Nobody.

Cheaper prices and lower valuations are advantageous for long-term investors buying stocks. You get more shares and higher yields for the same amount of money invested.

I came up with a helpful rhyme. And I shared it with my Patrons over at Patreon a little while ago. It goes like this:

Investors are keen to see green on the screen.

That’s where you make the real bread.

Today, I want to tell you about five dividend growth stocks that are down more than 20% from their recent highs. Ready? Let’s dig in.

First up, we have to have a quick discussion about Bank of New York Mellon (BK).

Bank of New York Mellon is a global financial services company with a market cap of $35 billion.

This bank flies way under the radar. And that might be because few people are even aware of it. It’s not your corner bank where you deposit your paycheck. This is the world’s largest trust bank. We’re talking about over $46 trillion in assets under custody and administration. It’s a massive financial institution that is a crucial part of the global financial infrastructure.

Banks like Bank of New York Mellon are attractive to long-term investors because they’re literally in the business of money. And shareholders have benefited from that, as partially evidenced by the dividend growth track record.

The bank has increased its dividend for 11 consecutive years. 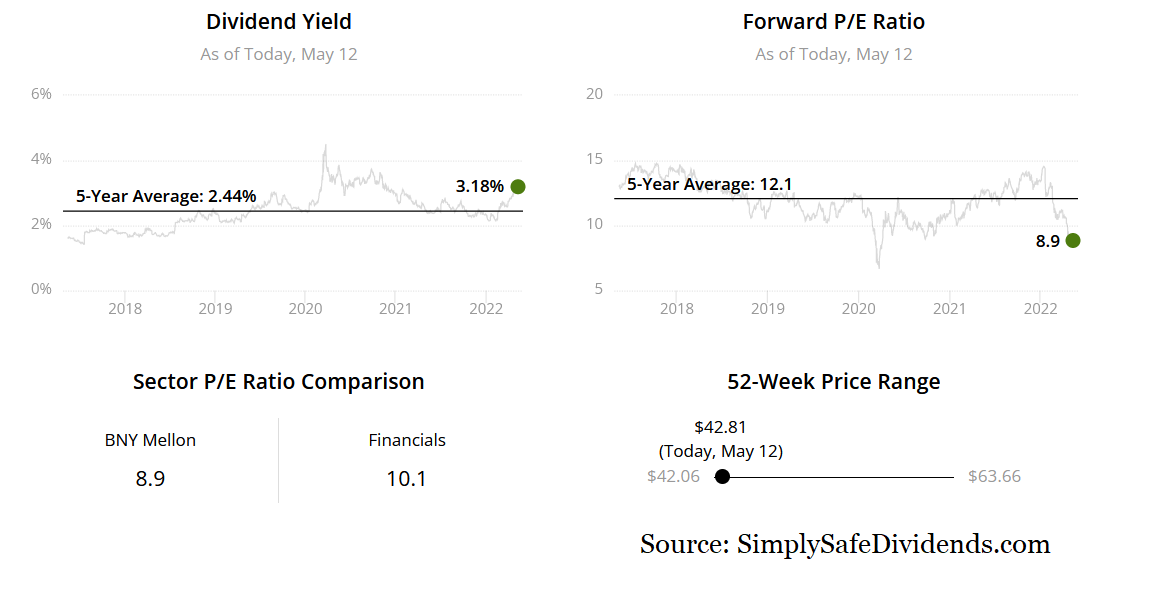 This company has a shorter dividend growth track record than it should, as the GFC disproportionately hurt banks like this one. That said, they’ve come roaring back over the last 10+ years. The 10-year DGR is 10.5%. Plus, the stock’s yield of 3.2% is more than twice as high as the broader market’s yield. And with the payout ratio at 32.9%, the dividend is almost a lock to head higher over the foreseeable future.

This stock has cratered along with a lot of bank stocks, and it’s now down 33% from its 52-week high.

The company reported a solid Q1 report in mid-April, showing a nice increase in both assets under management and assets under custody and administration. And this company benefits from rising rates. The business is holding up well. The stock? Not so much. Shares are currently trading hands for about $43/each, whereas the 52-week high for the stock is $64.63.

It’s fallen off a cliff. We already put some content together for an upcoming analysis and valuation video on the company, and that video will show why the bank could be worth $51.17/share. The disconnect between price and value looks enticing. Take a look at this one, if you haven’t already.

The second dividend growth stock I have to highlight today is Comcast (CMCSA).

Comcast is a multinational media conglomerate with a market cap of $178 billion.

If you’re not familiar with Comcast, you might assume this is a dying cable company. But if you are familiar with Comcast, you know that’s not the case at all. This is a broadly diversified media company that actually has growth vectors, including streaming and broadband. Speaking of the latter, do you think more or less people will be demanding high-speed internet access in the future? Dumb question, right? Exactly. And that’s why Comcast is in such a great position to continue growing the business and its dividend.

The media company has increased its dividend for 15 consecutive years.

Their 10-year dividend growth rate is 16.3%. Even their most recent dividend increase, with so much uncertainty going on, came in at 8%. Does any of that sound like a dying cable company? I don’t think so. The stock offers a juicy yield of 2.7% to go along with the growth. And with the payout ratio at only 34.7%, the dividend is secure.

The company definitely isn’t dying, but the stock has been – it’s down a shocking 36% from its 52-week high. 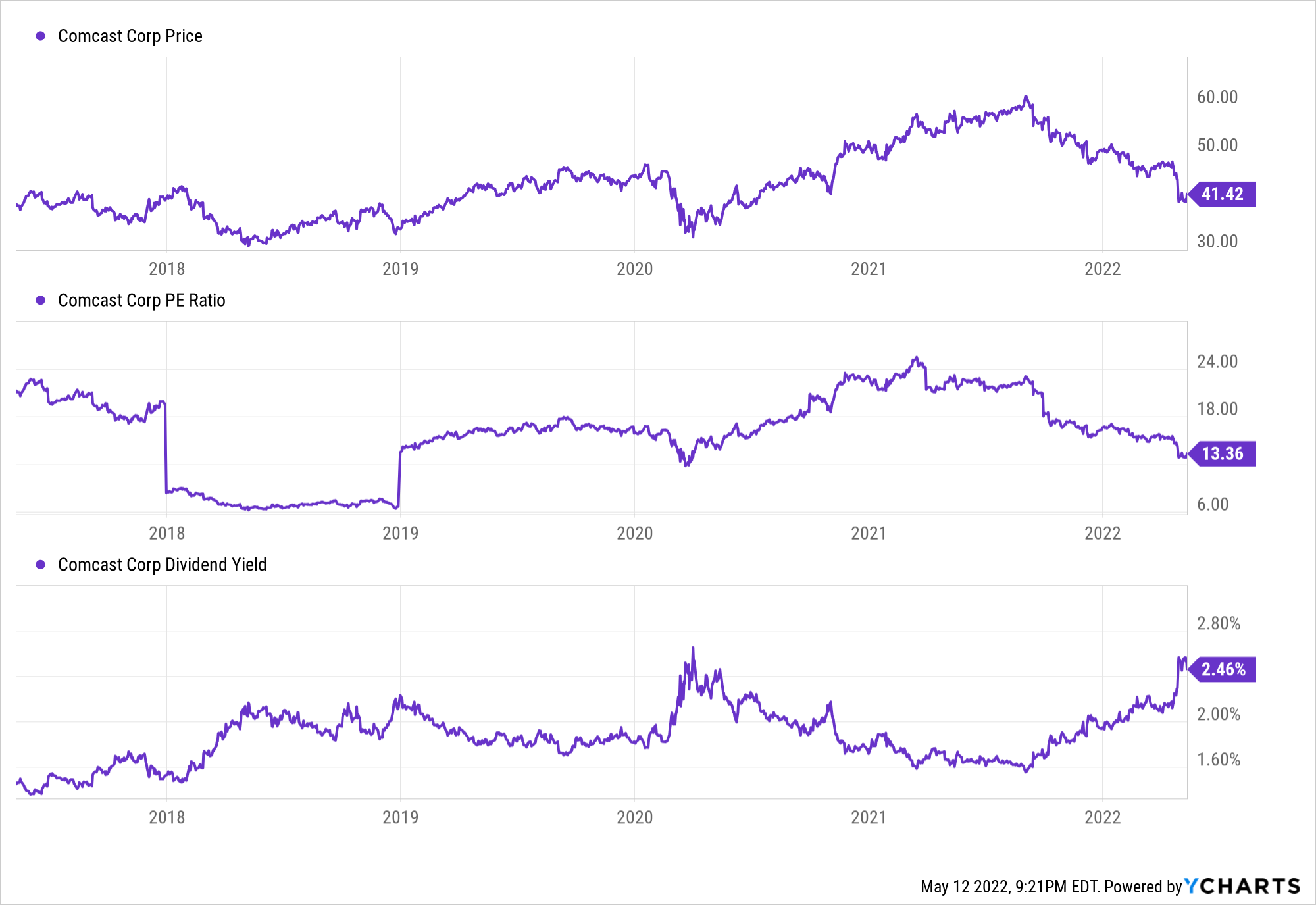 The 52-week high for the stock is $61.80. Shares are currently selling for slightly less than $40/each. I don’t know about you, but I know that I’d rather pay $40/share than $60/share for the same exact business.

Every basic valuation metric is significantly below its respective recent historical average, including the P/E ratio, which is currently sitting at just 12.8. We put out a video analyzing and valuing Comcast back in late January, with the fair value estimate coming out at $58/share. This business looks extremely undervalued right now. Keep it on your radar.

Next up, let’s talk about Innovative Industrial Properties (IIPR).

Innovative Industrial Properties is a real estate investment trust focusing on medical-use cannabis industry with a market cap of $4 billion.

The REIT has increased its dividend for six consecutive years.

And what a start they’re off to. The three-year DGR is 70.6%. Yes. 70.6%. Now, that won’t persist forever. But the company’s most recent dividend increase, which was announced in March, came in at 16.7%. And that was after paying the last dividend rate for only two quarters. This company has been increasing its dividend almost every quarter. Incredible.

On top of that, the stock offers a market-smashing yield of 5.4%, which is nearly 300 basis points higher than its own five-year average. The only thing to dislike about the dividend, if there is anything to dislike, is the fact that FFO is only slightly ahead of the dividend. Then again, the business is growing so fast, the coverage should improve in the months ahead. 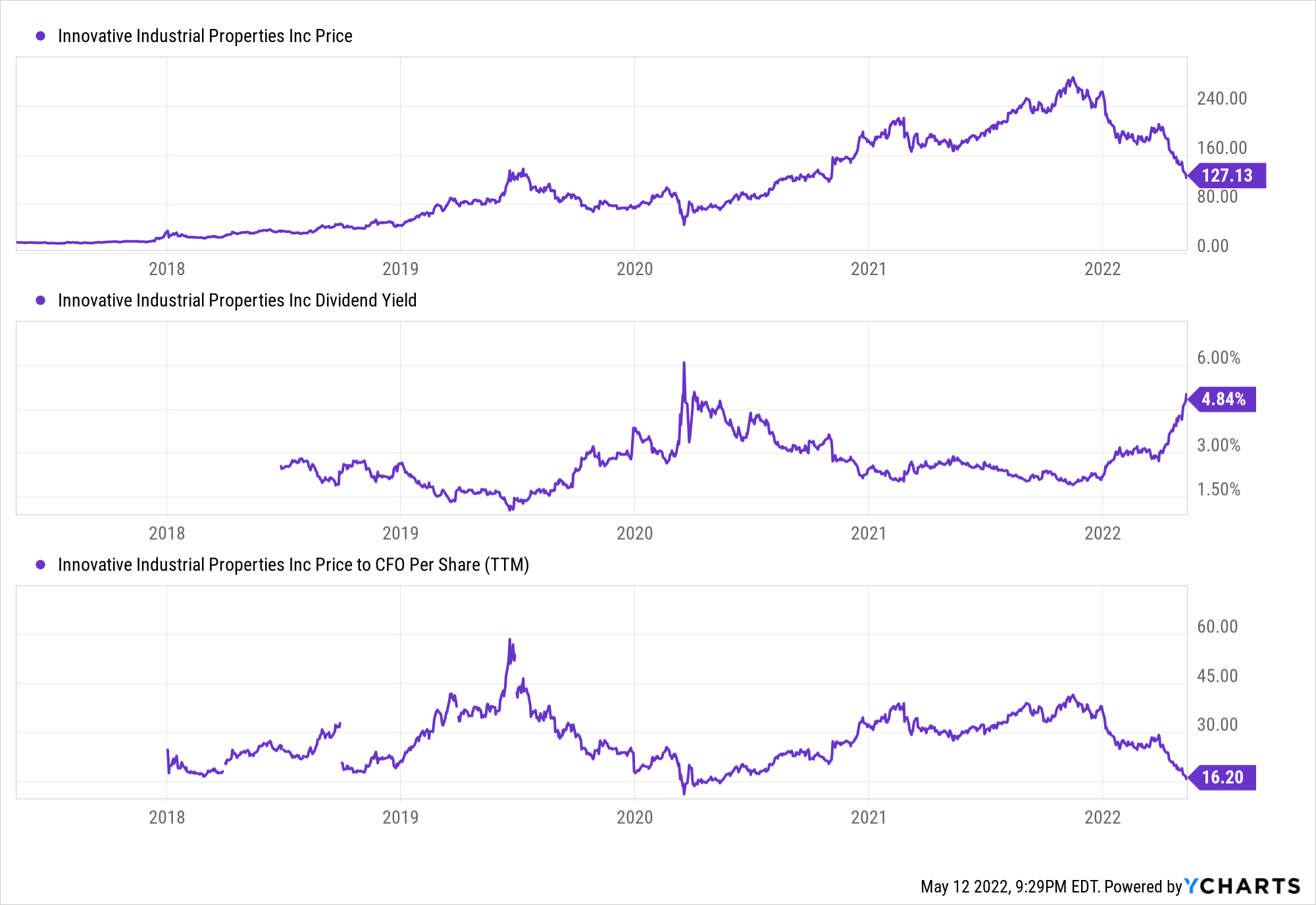 The stock’s 52-week high of $288.02 is long gone. Shares are currently priced at about $130/each. There has been a rapid decoupling between the business and the stock. This disconnect is very odd, especially considering that the REIT put up a great Q1 report in early May that showed 50.3% YOY revenue growth and 38.8% YOY growth in AFFO/share. Nobody seems to care about that in this market, however.

Most basic valuation metrics are nearly 50% lower than their respective recent historical averages. Yes, 50%. The P/CF ratio, for example, is at 16.6. Its five-year average is 26.2. I wouldn’t bet the farm on something like this. But it’s a very interesting, and cheap, REIT that offers one of the most explosive combinations of growth and yield that I’ve ever seen.

The fourth dividend growth stock I want to tell you about is Johnson Outdoors (JOUT).

Johnson Outdoors is an outdoor recreational products company with a market cap of $650 million.

This small-cap outdoor products company is another business that flies under the radar. But this company is actually in the orbit of the venerable SC Johnson constellation of companies. Most of SC Johnson’s businesses are private. But Johnson Outdoors is not. This is a debt-free niche business that has been putting up great numbers for years, which has translated into great dividend growth for years.

Johnson Outdoors has increased its dividend for nine consecutive years.

The growth here has been outstanding. Their five-year DGR is 23%. On the other hand, you have to sacrifice some yield to get that growth – the stock’s yield is 1.9%. However, that yield does beat what the market gives you. And it’s 110 basis points higher than its own five-year average. That’s substantial. This is also a well-covered dividend, with the payout ratio at only 16.4%. 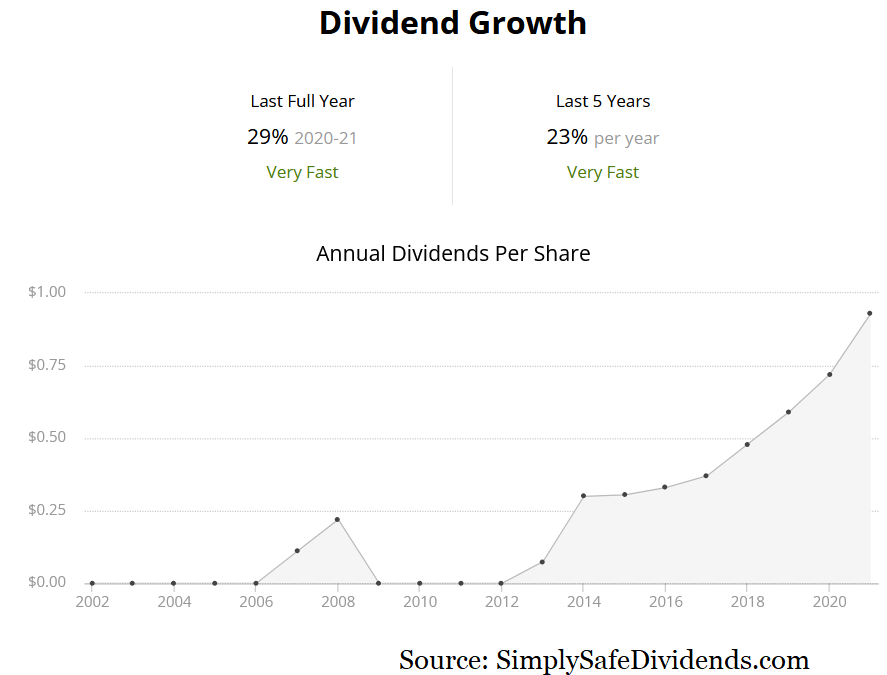 The 52-week high on the stock is $145.50. Shares are now trading hands for less than $64/each. This kind of drop is what you might more commonly see in speculative areas of the market like the no-profit tech companies with sky-high P/S multiples. You know, the entire Cathie Wood ARKK complex. But this is a debt-free, highly profitable outdoor products company that is a cousin of the very successful SC Johnson empire. What gives?

Well, inflation, kinks in the global supply chain, and a pandemic-induced pull-forward of sales have all conspired to weaken the company’s near-term sales and margins. But make no mistake. They still earn plenty of money. And while you wait for a rebound in the business, the valuation has become extremely compressed. The P/E ratio is 11.5, even with much of the depressed EPS already in the bag. It’s a small-cap business. So you have to be mindful of the risk. But I think it’s at least worth consideration here after the drop.

Last but not least, I have to highlight Starbucks (SBUX).

Starbucks is a multinational chain of coffeehouses with a market cap of $84 billion.

It’s crazy to have Starbucks on the list today. I’ve been investing for 12 years now. And for much of that time, this stock would seemingly defy gravity. It seemed to be expensive for years on end. Well, patience is a virtue.

And those who have waited and waited for this stock to enter the strike zone have been rewarded with what could be a great opportunity to invest in one of the world’s very best businesses. This company has one of the most well-known brands on the planet. It practically prints money. And shareholders have collected lots of that money directly, via growing dividends.

The coffeeshop chain has increased its dividend for 12 consecutive years.

Their 10-year DGR is a very impressive 20.7%. That said, more recent dividend raises have been more modest. The pandemic, and the related shutdowns, caused a lot of uncertainty in this industry. One of the company’s biggest markets – China – is still doing shutdowns. On the other hand, many independent coffee shops around the world have almost surely had to shut down, putting this company in an even better competitive position as it comes out on the other side. 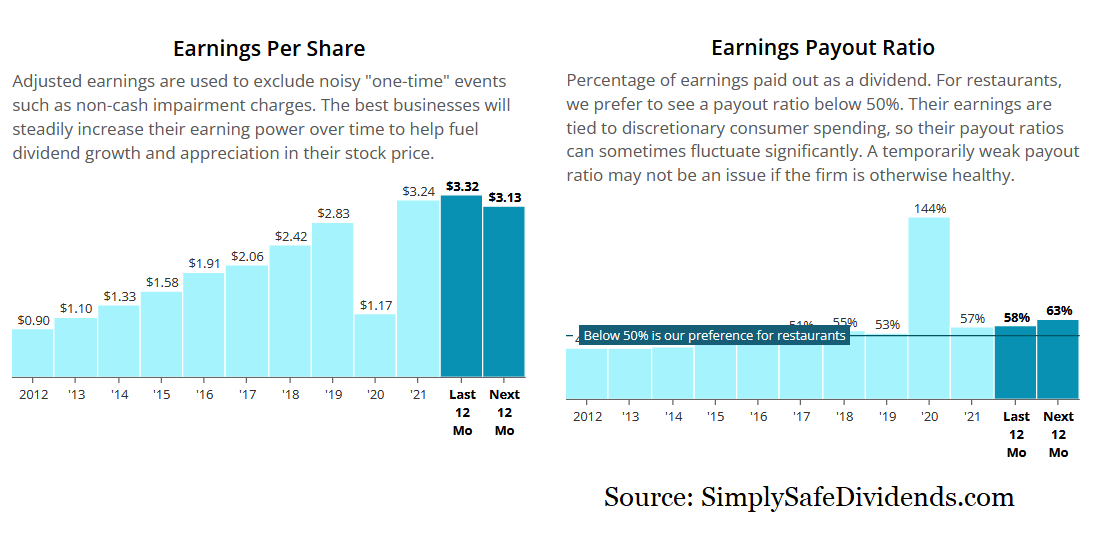 The yield of 2.7% compensates investors for some of that additional near-term uncertainty, as that yield is 100 basis points higher than its own five-year average. This stock does not typically offer this kind of yield. The payout ratio, which is at 52.4%, shows a healthy dividend positioned for more growth.

This blue-chip stock is down a stunning 42% from its 52-week high.

We’re talking about Starbucks here. Not some unprofitable junk business that went public on a hyped-up SPAC. It’s really surprising to see it down this much. The 52-week high of $126.32 is in the rearview mirror, with shares currently trading for about $73.50/each. As I’ve said many times before, though, I always see short-term volatility as a long-term opportunity. And Starbucks could be a shining example of that.

We put out an analysis and valuation video on Starbucks back in February, and the estimate for fair value on the business came out to nearly $110/share. This stock looks substantially undervalued from where I’m standing. If you don’t yet have enough Starbucks in your portfolio and believe in the long-term story, now might be a good time to think about jumping in.