The acronym FANG was allegedly coined by CNBC’s Jim Cramer way back in 2013. Apple (Nasdaq: AAPL) was added in 2017, changing the acronym to FAANG.

If you had bought the original four FANG companies at the start of 2013, you’re now one happy camper. 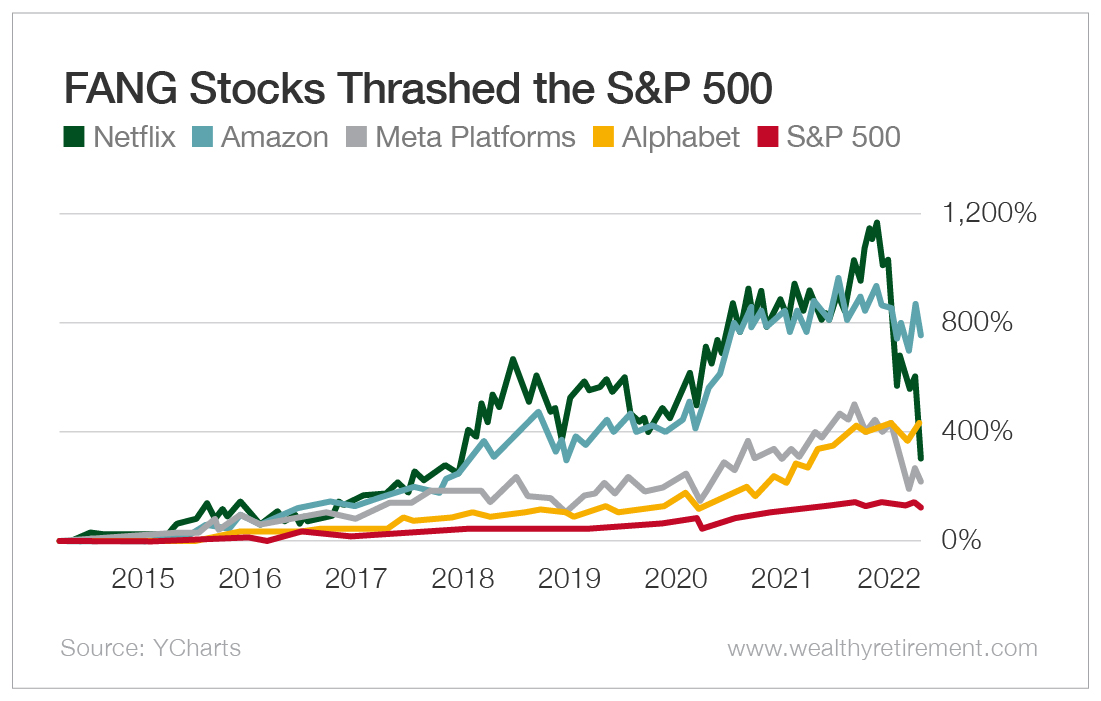 Each of these four powerhouse companies has thrashed the performance of the S&P 500 over this time.

However, if you bought these stocks six months ago, you’re hurting.

The bottom has fallen out. For some of the FANG members, it has been a brutal stretch. 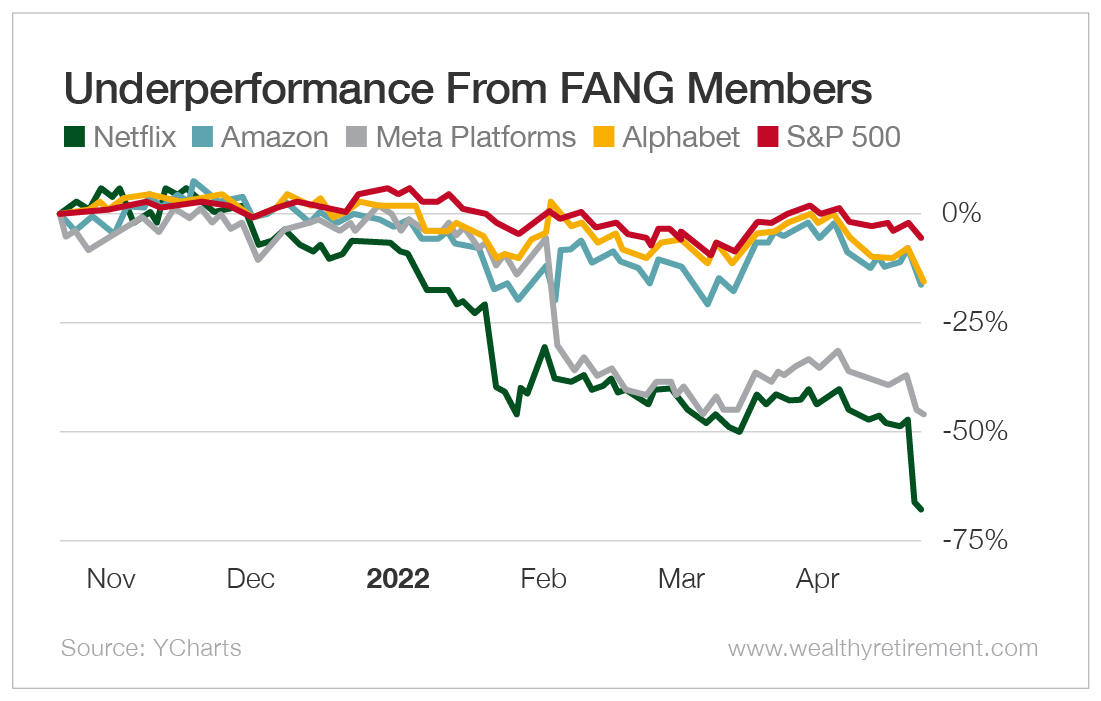 All four of the FANG members have underperformed the market over the past six months.

Netflix and Meta Platforms have seen their stock prices collapse.

I started warning about the potential for a big decline in the FANG and other Big Tech stocks a long time ago.

I was more than a year too early.

But I was right nevertheless.

The first pinprick in the FANG valuation balloon was rising interest rates.

The two FANG members that have had their stock prices demolished in recent weeks are Meta Platforms and Netflix.

The market soured on the news. Netflix saw a third of its stock price pared down in one day.

This is what happens to growth companies when the market thinks their growth is slowing or ending – the stock prices get punished.

In early 2021, the market valued Netflix at an incredibly rich 80 times earnings.

With future growth optimism now sucked out of the stock, Netflix is currently trading at under 20 times earnings. 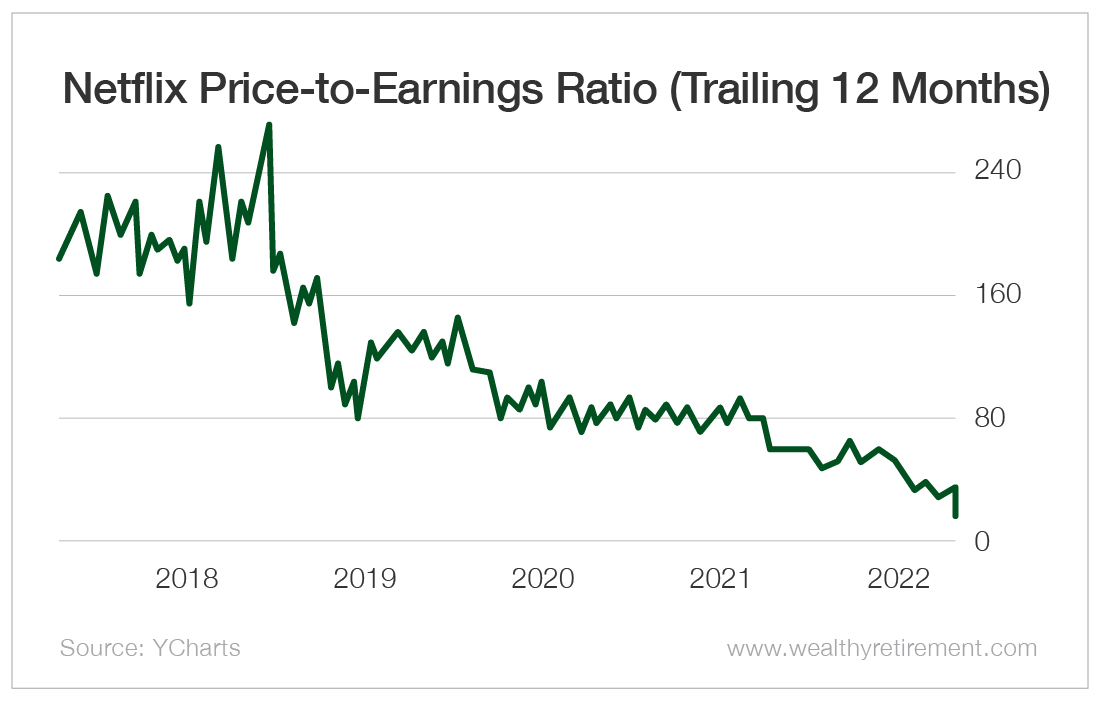 That is easily the lowest valuation that this company has traded for in recent memory.

It’s a small decrease. But it’s a decrease, nonetheless.

Since the market has started valuing Meta Platforms like a slower-growth business, it now trades like an average company at best with a valuation of under 13 times earnings. 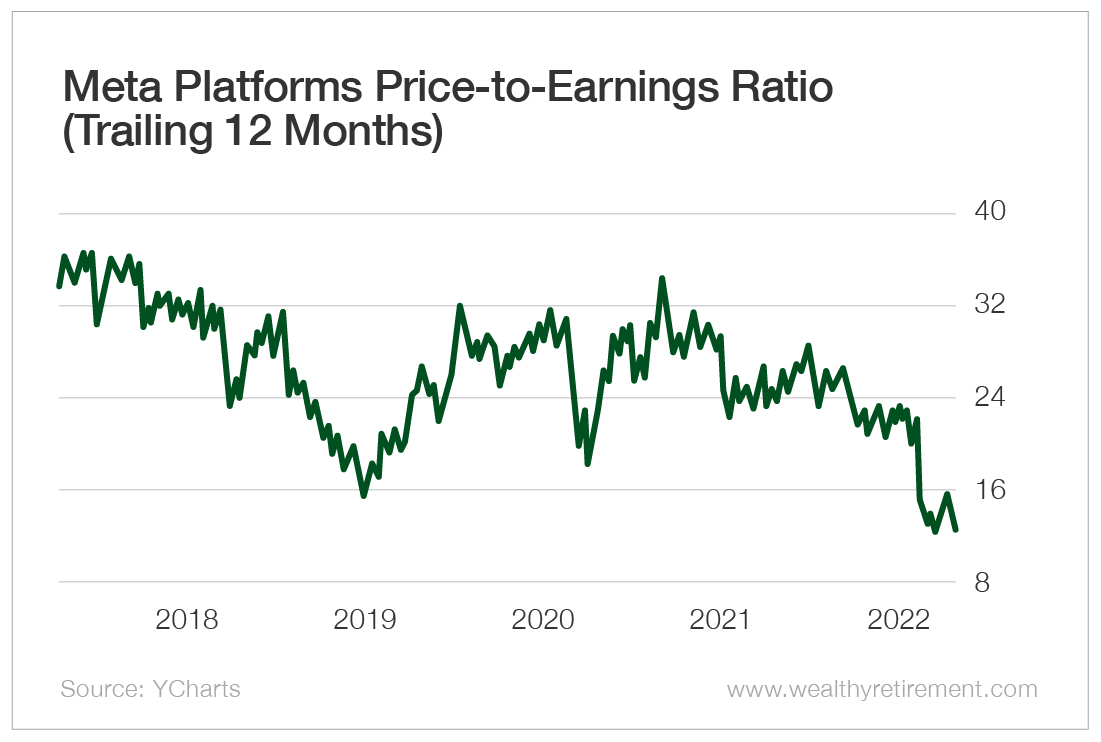 Netflix and Meta Platforms have been so successful and have gotten so huge that it has become extremely difficult for them to continue growing.

With their huge valuation declines, these two companies are former growth stocks that now have value stock valuations.

To me, that represents opportunity because they are still incredibly powerful businesses.

As an investor, my choice between the two at their current valuations is Meta Platforms, every day of the week.

Netflix does not. It must constantly, and aggressively, reinvest in new content.

While Meta generated almost $40 billion in free cash flow over the past 12 months, Netflix generated none. 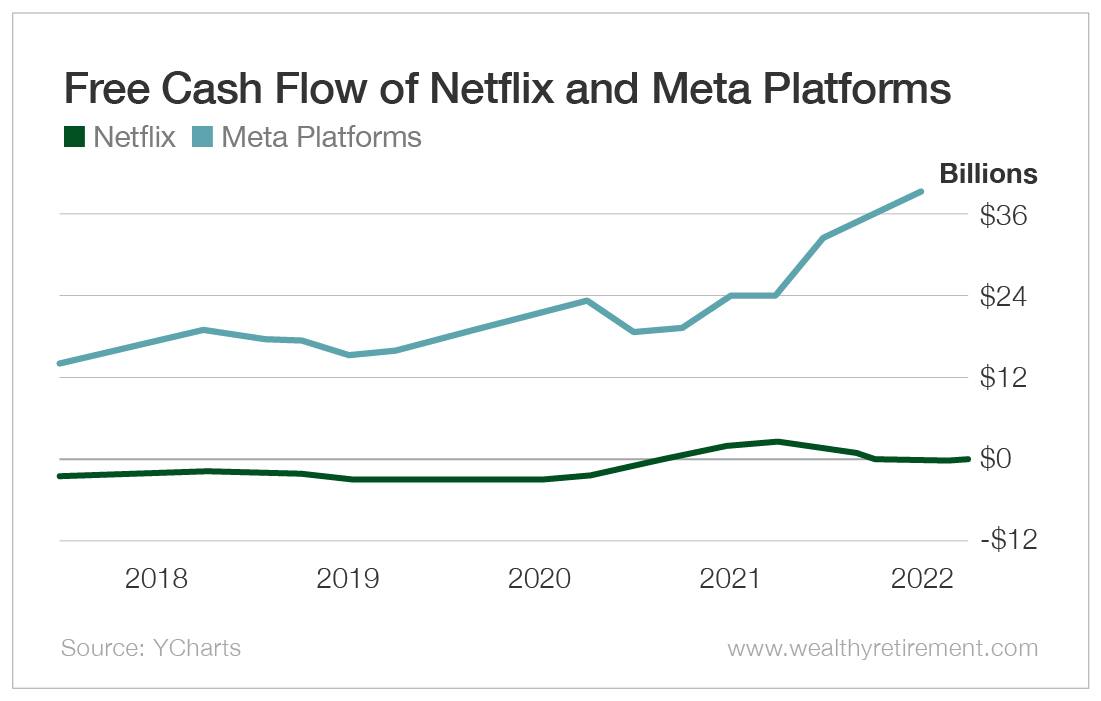 Free cash flow is the entire purpose of conducting business.

It’s not that I dislike Netflix at its current share price. It’s that the market is giving us a better value proposition with Meta Platforms at under 13 times earnings.

I’m not calling a bottom, but I’d be a happy buyer of Meta here.