Russia’s invasion of Ukraine and the resultant sanctions against Russia are creating many profitable opportunities for investors.

However, many of these opportunities have been passing by unnoticed because they occur in a sector that Wall Street routinely ignores: commodities.

A major piece of news on March 21 has led to one of these under-the-radar opportunities:

Australia announced that it was banning the export of alumina to Russia. Alumina, also called aluminum oxide, is a white or nearly colorless crystalline substance used as a starting material for the smelting of aluminum metal.

More on that in a moment, but first, I want to show you how important aluminum is to the global economy. Its prospects are bright.

The transportation and construction sectors consume more than half the amount of aluminum produced each year. The global auto industry alone is the world’s second-largest consumer of aluminum.

A post-pandemic rebound in global vehicle sales has yet to trail off, but even if it does, China’s push into electric vehicles should ensure demand persists.

Electric vehicles use 45% more aluminum than internal combustion engine cars so as to reduce weight. Forecasts are that, by 2035, EVs should make up half of all cars produced, so the demand for aluminum will only increase.

Infrastructure spending is also a positive for aluminum. Demand from construction and electric cable manufacturers—together a third of consumption—is expected to increase by half by 2040.

The ban of alumina exports to Russia further tightened the raw materials squeeze on the Russian aluminum giant Rusal. The company is the world’s second-largest aluminum company by primary production output, producing four million metric tons annually. (It had been the largest aluminum producer until overtaken by China Hongqiao Group in 2015. )

The Australian government’s ban didn’t explicitly name Rusal, but it is a de-facto sanction on the company that dominates Russian aluminum production.

This has led to very bullish circumstances for aluminum companies outside of Russia: aluminum prices hit a record high of $3,966 per metric ton in March and—thanks to sanctions—is still trading near that price, at $3,500 per ton as of this writing.

The news is also a major positive for the companies involved in the sea-borne alumina market. This market is dominated by Rio Tinto (RIO), Alcoa (AA), and Norway’s Norsk Hydro (NHYDY).

The global aluminum supply chain was already under duress. Power constraints have turned China, the world’s largest producer, into a net importer of unwrought aluminum (aluminum in the form of ingots, blocks, billets, slabs, etc.) to feed its massive downstream aluminum products sector. What is going on in China is another example of why aluminum is sometimes nicknamed “congealed electricity.”

No one is calling aluminum the dull metal anymore. I expect it to remain in high demand for many months to come. That is great news for one of the companies I mentioned earlier, Alcoa. 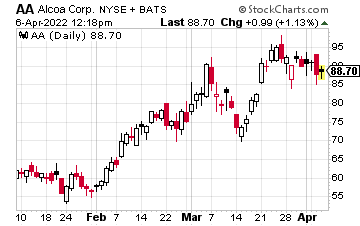 The company is a major global provider of bauxite ore, alumina, and aluminum products.

Alcoa is somewhat unique in the industry, as the company can trace its operating history back to 1888. But it has a short post-spinoff history.

Back in 2016, Alcoa split into two companies—Alcoa, the aluminum company and Arconic, a global leader in multi-material, precision-engineered products and solutions for high-growth markets like the aerospace industry.

Let’s go back and focus on Alcoa and its three divisions:

The company’s rising financial strength is reflected in management’s decision to initiate a quarterly cash dividend of $0.10 in November 2021. Alcoa also announced a new $500 million share repurchase program, which adds to its existing $150 million stock buyback authorization. Alcoa is a buy on any market weakness. Don’t let its 188% rebound over the past year—from extremely depressed levels—make you think there is not a lot more to come. There is.