So far in 2022, the Commodity Research Bureau (CRB) Index has increased by the largest amount we have ever seen in a single year. 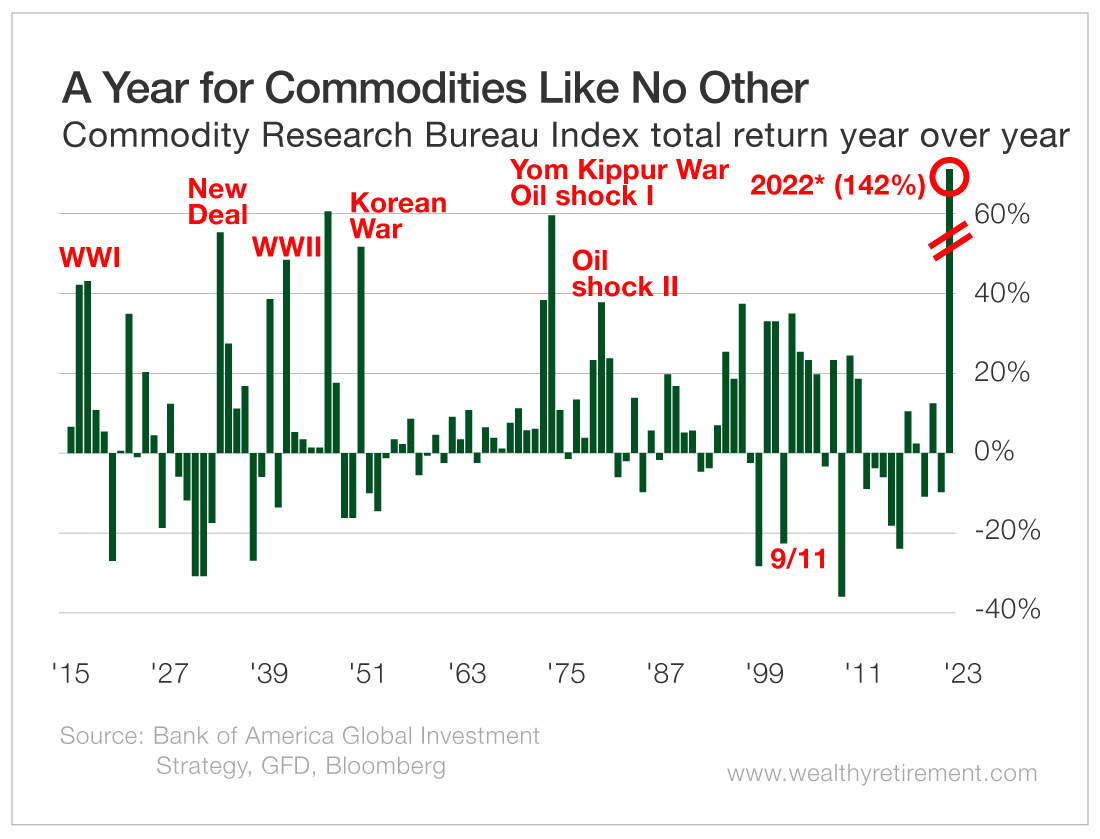 We are only in April, and we have already eclipsed the commodity price shocks experienced during World War I, World War II, the Yom Kippur War and the 2008 commodity super-bull market.

In other words, the above chart shows that commodities are soaring across the board.

Food, energy and metals are all rallying. 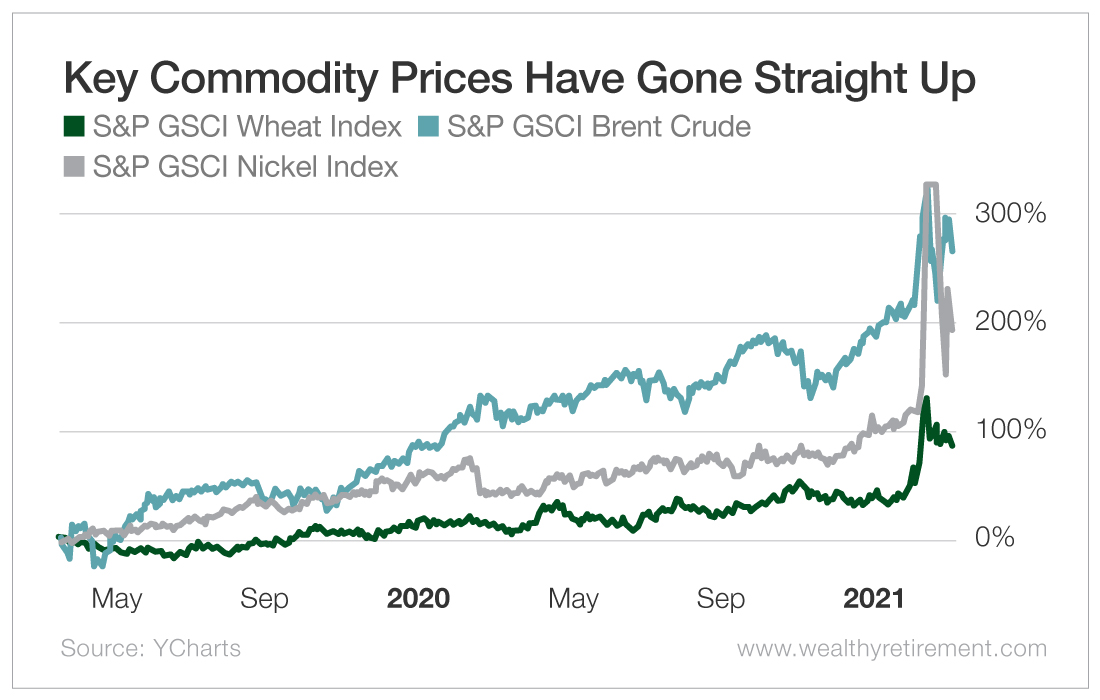 This chart shows the spiking prices of wheat, crude oil and nickel.

We are experiencing the consequences of an absolute perfect storm for rising commodity prices.

Worried for a While Now

In February 2021, I started warning that commodity prices were poised to enter a powerful bull market.

A decade of massive underinvestment in supply by commodity producers had put commodity prices on the precipice of a major rise.

Now the supply problem has arrived.

In February 2021, I quoted Goldman Sachs commodity guru Jeff Currie, who summed up the alarming situation by saying, “Every single commodity market with the exception of wheat is in a deficit today.”

And with Russia and Ukraine accounting for a quarter of the world’s wheat exports, even that commodity has a supply challenge now.

Wheat shortages are especially concerning because the developing world has to import a lot of these agricultural products.

The last time food prices spiked like this, it created the unstable environment that resulted in the Arab Spring uprising of 2010.

So food shortages mean more instability in an already unstable world – something else to keep an eye on in the months ahead.

But the incredibly bullish setup for commodities is more than a supply story.

Over the course of a decade, central bankers have created the most inflationary monetary conditions in history.

Think of it this way… The supply shortages were the dry wood, the free-money policies of central bankers were the flammable and the Russian attack on Ukraine was the spark.

The result is a massive commodity price boom.

Currie’s bullish case on commodities was so convincing in February 2021 that I had to bring it to the attention of Wealthy Retirement readers.

If you got long on commodities or commodity producers at that time, you have made a killing over the past year.

Since Currie was so on the mark, I’ve been following how his view of the commodity market has evolved since then.

Today, despite the huge surges in prices we’ve seen over the past year, Currie believes this commodity bull run is just getting started.

The reasoning behind his theory sounds a lot like mine.

We have a decade’s worth of underinvestment in commodities to make up for.

Turning around a period of underinvestment that long is going to take a significant amount of time.

There’s no magic switch to fix our problem.

If Currie is correct again, the inflationary pressures that we’re all feeling are here to stay for a while.

An end to hostilities in Ukraine might provide some temporary relief, but the long-term upward commodity price trend will stay strong.

That makes generating solid returns from our portfolios even more important to us.

We need to invest well to protect our wealth from high rates of inflation that we haven’t experienced in a generation.