2022 has been nuts, right? After investing for more than a decade, I’ve never seen this kind of sustained daily volatility before.

But, as always, I see short-term volatility as a long-term opportunity. This volatility has caused cratering stock prices left and right. I don’t know about you, but that has me very excited.

After all, why wouldn’t you want to pay lower prices for the same stocks? All else equal, lower prices result in higher yields. That’s more dividend income on the same invested dollar.

If your goal, like mine, is to live off of passive dividend income, this gets you to the promised land even faster.

Meanwhile, since big drops in price often result in depressed valuations, you get paid handsomely to wait while the upside of price returning to value unfolds.

Well, you get paid even more – because of the higher yields.

Actually, since we’re talking about dividend growth stocks here, you’re getting paid even more and ever-more through those future dividend increases.

Like I said, very exciting stuff. Today, I want to tell you about five dividend growth stocks that are down 20% or more from their recent highs. Ready? Let’s dig in.

The first dividend growth stock I want to tell you about is A. O. Smith (AOS).

A. O. Smith is a water heating and water treatment company with a market cap of $10 billion.

And this company takes it a step further by making sure that people get water on their terms – heated, filtered, softened, etc. As long as consumers want water in this way – which is highly likely – A. O. Smith should see its profit rise. And A. O. Smith shareholders should see their fair share of those profits – via dividends – also rise.

This water modifier has increased its dividend for 28 consecutive years.

Yep. This is a vaunted Dividend Aristocrat. The crème de la crème of dividend growth stocks. A. O. Smith has been reliably sending out ever-larger dividends to shareholders, and I see no reason why that’ll discontinue at any point in the foreseeable future. 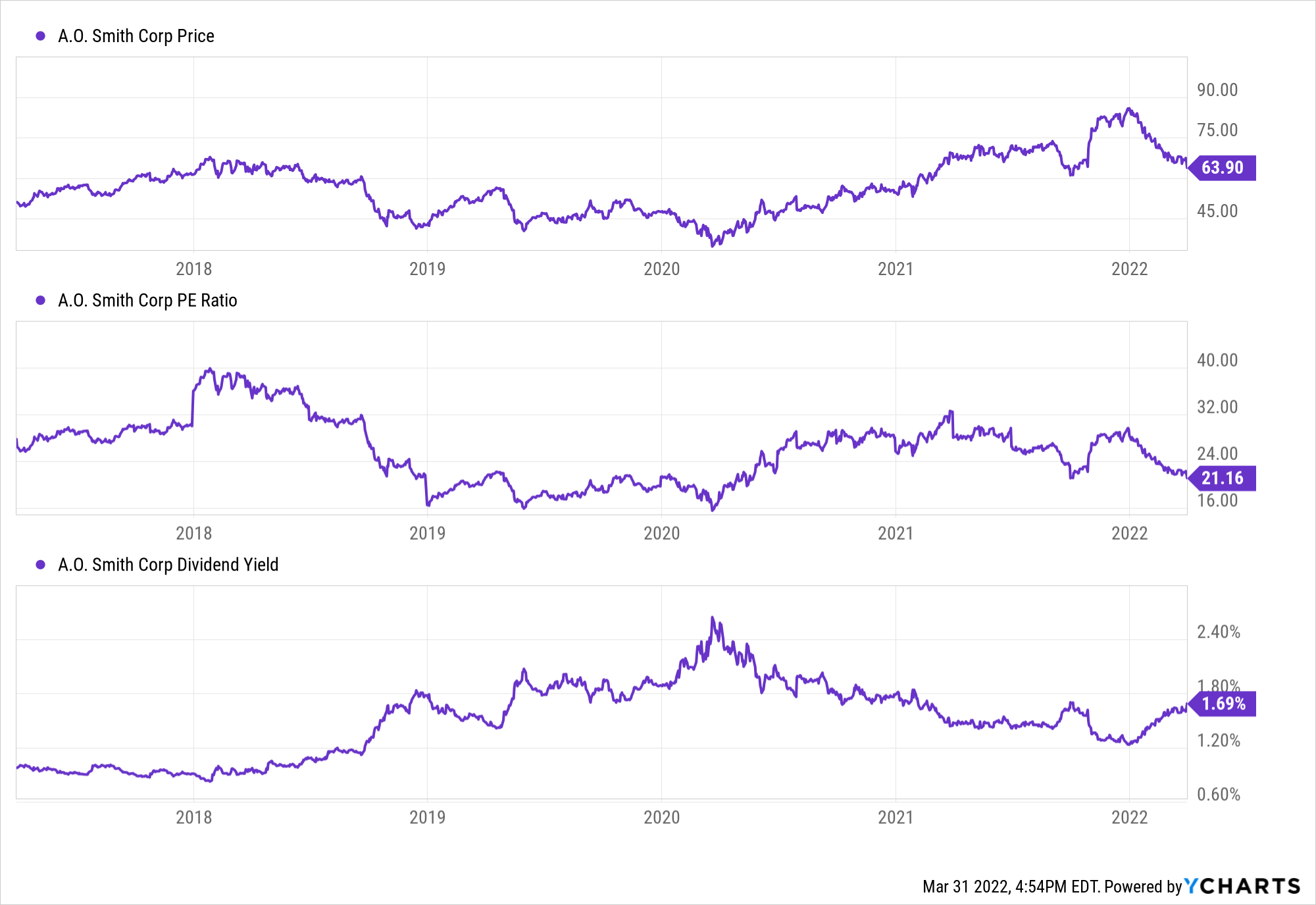 The 10-year dividend growth rate is 21.6%, which is monstrous. On the other hand, the yield of only 1.7% tells you that this is not an income play; it’s a compounder. And with a payout ratio of 37.1%, the company has plenty of room to continue aggressively increasing the dividend for years to come.

This Dividend Aristocrat is now down 23% from its 52-week high.

You don’t often see Dividend Aristocrats totally crater like this. Especially since nothing has changed with the business or its fundamentals. The 52-week high of $86.74 may have been a bit much, but the stock’s current pricing of below $67 looks compelling to me. Its basic valuation metrics are noticeably below their respective recent historical averages.

The P/E ratio of 22.1, for instance, is way off of its own five-year average of 26.0. If you want to buy a 20%+ dip on a Dividend Aristocrat in the water space, A. O. Smith should have your attention, if not your capital.

Next up, I want to highlight Cummins (CMI).

Cummins is a manufacturer of engines, power generation products, and related components with a market cap of $30 billion.

Cummins flies under the radar, but I think it’s an underappreciated gem. Yes, they have the old-school engine manufacturing business model. Keep in mind, though, that’s still a very lucrative place to be. And it’ll remain lucrative for a while longer.

But – and this is key – Cummins is positioning itself for the future of mobility by putting capital to work with new technology verticals in fully electric and hybrid powertrain systems, as well as hydrogen fuel cell technology. This positions the company to transcend. And it positions the dividend to transcend.

The mobility company has increased its dividend for 16 consecutive years.

Cummins has some fantastic dividend metrics. The 10-year dividend growth rate is 15.5%. Anytime you get double-digit dividend growth, you’ve gotta love that. And you’re pairing that high growth rate with a strong, market-beating yield of 2.8%. We can also have a lot of confidence in the company’s ability to keep raising the dividend, as the payout ratio is a low 39.7%. That gives them a lot of financial leeway in terms of future dividend increases. 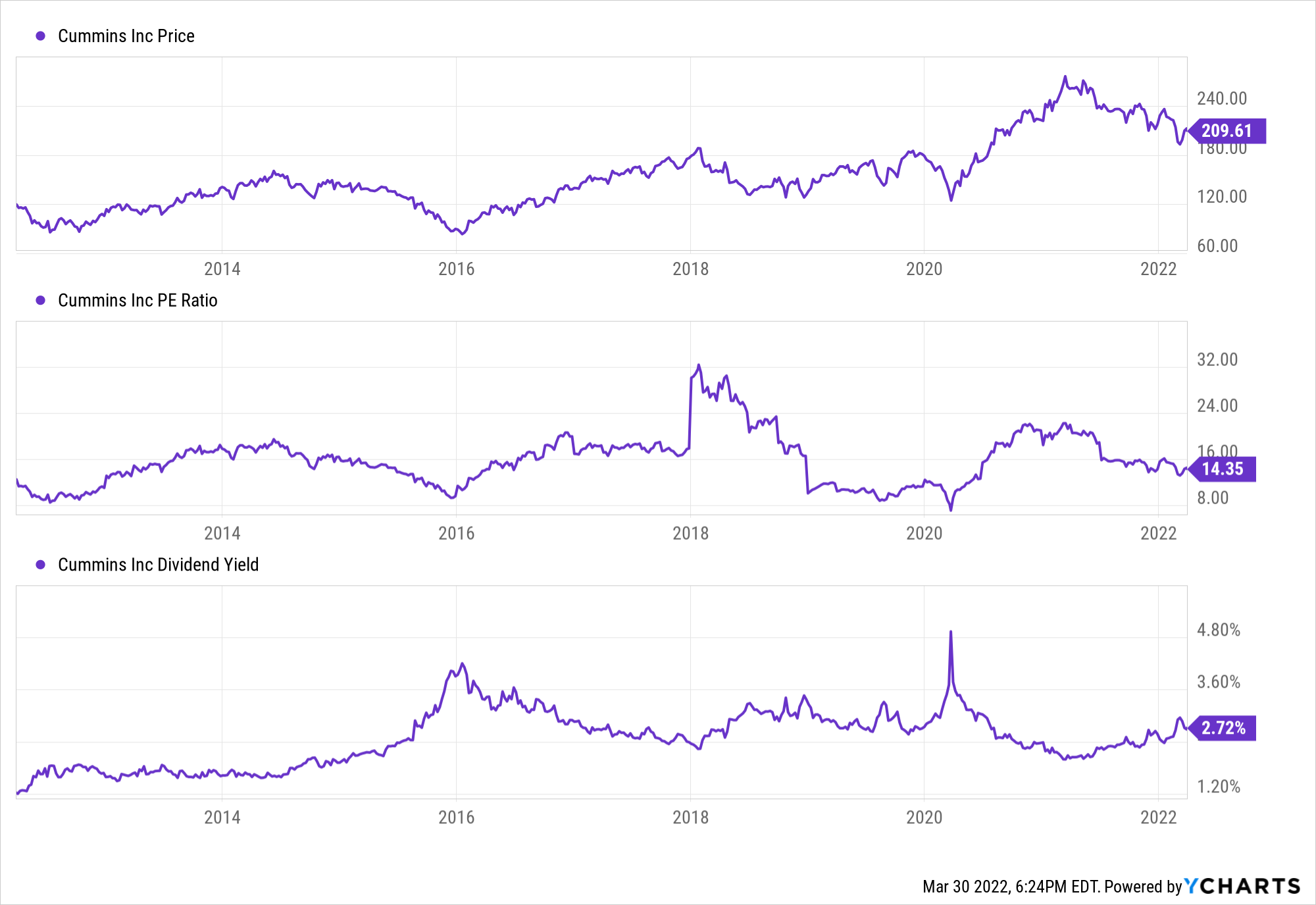 Like buying the dip? Well, here you go. This stock is down a stunning 24% from its 52-week high.

Yeah, a bit more than a dip. That’s a correction. Actually, that’s more than two corrections stacked on top of each other. In my view, it’s been overdone. I think this is such a gem that I selected Cummins as one of my top five dividend growth stocks for April 2022. And that video should go live soon, if it hasn’t already.

We’re also putting together a full analysis and valuation video on Cummins, which will detail its quality, appeal, and undervaluation. So keep an eye out for that. Suffice it to say, I view Cummins as a high-quality dividend growth stock that’s on sale after this 24% drop. Make sure it’s on your radar, if not in your portfolio.

The third dividend growth stock we have to talk about is Gilead Sciences (GILD).

Gilead Sciences is an international biopharmaceutical company with a market cap of $74 billion.

Gilead is the Rodney Dangerfield of Big Pharma – it gets no respect. And some of that has been Gilead’s fault. They’ve had some missteps over the last few years. But the expectations have dropped to rock-bottom levels now.

There’s almost no growth being priced in at this point, which I think is ludicrous. But what have these low expectations done? Well, it’s made it so that Gilead doesn’t have to do very much to exceed them. And it’s put the dividend in an even more attractive spot.

The pharmaceutical giant has increased its dividend for eight consecutive years.

They’re off to a nice start in this regard, with a five-year dividend growth rate of 9.1%. With a payout ratio of 59.2%, the dividend is in a good spot to continue rising. And that’s great news, considering the stock already yields 4.9%.

You don’t need massive dividend increases to make sense of things when you’re starting off with a near-5% yield. Not only is this kind of yield almost unheard of in this space, it’s not even a super common yield right now in higher-yield areas of the market like utilities. That’s how low the expectations have become. 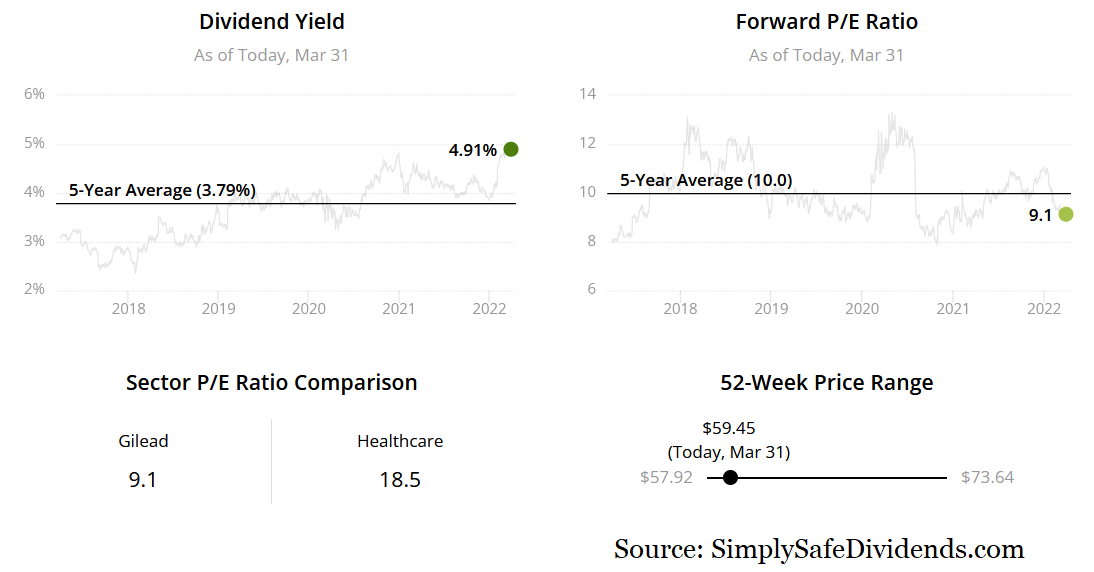 The 20% drop from its 52-week high is made even more noticeable when it looked cheap at the high.

That’s right. Even at the 52-week high of $74.12, the stock did not look expensive at all. However, cheap stocks can get cheaper. And this is a prime example of that, as the stock is now below the $60 mark. Every basic valuation metric is indicating extreme cheapness at this point.

The P/E ratio of 12 is way below the broader market, way below the industry average, and way below its own five-year average. There’s also the P/CF ratio. At 6.6, that’s insanely low. Now, this isn’t a stock that ever commands a high cash flow multiple – its five-year average is just 9.1. But we’re below even that. If you want low expectations and a high yield after a 20% drop, Gilead is worth a very close look.

The fourth dividend growth stock I want to mention today is Sherwin-Williams (SHW).

Sherwin-Williams is a paint and coatings company with a market cap of $65 billion.

Nobel Prize-winning economist Paul Samuelson once said: “Investing should be more like watching paint dry or watching grass grow. If you want excitement, take $800 and go to Las Vegas.” I couldn’t agree more. And so, in that case, what could be a more apt investment than a literal paint company? It might seem boring. Unless you like collecting a safe dividend that grows at a high rate, year in and year out, like clockwork.

The company has increased its dividend for 44 consecutive years. 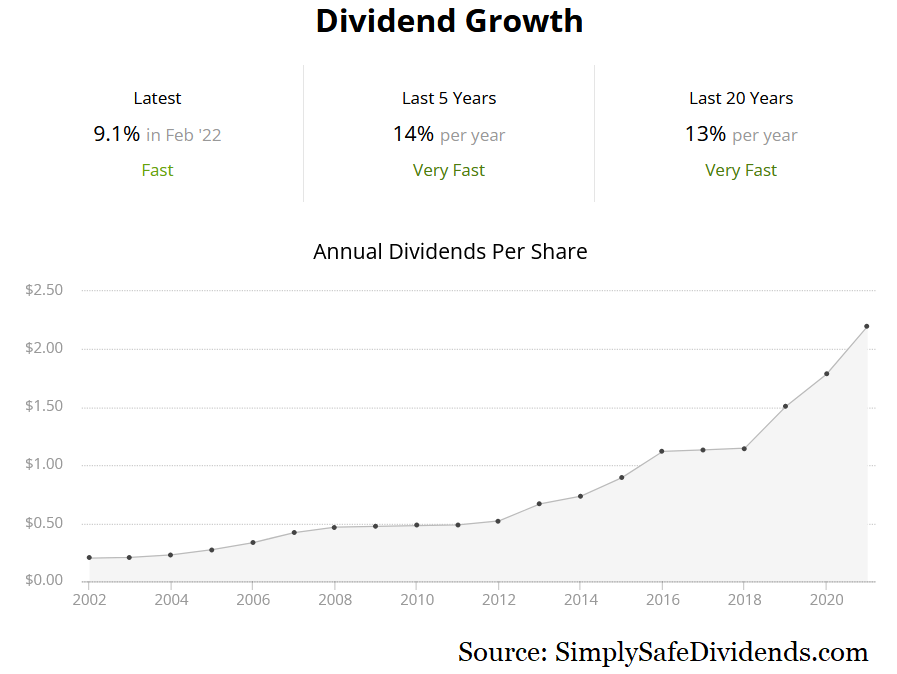 That track record is longer than I’ve been alive for, which is impressive. By the way, we’ve got another Dividend Aristocrat on our hands. And it shouldn’t be a surprise. So-called boring industries are fertile ground for consistently increasing profits and dividends.

And with a payout ratio of only 34.4%, there should be a lot more where that came from. Now, the stock only yields 1%. This is not a stock you buy for big income. Instead, it’s been a tremendous long-term compounder. We’re talking about a stock that’s up nearly 600% over the last decade – even after its recent pullback.

Speaking of that pullback, this stock is 29% off of its 52-week high.

Yeah, that’s more than a pullback. More like a cratering. But that’s exactly what you want to see if you’re looking to get in and start accumulating shares in the business. 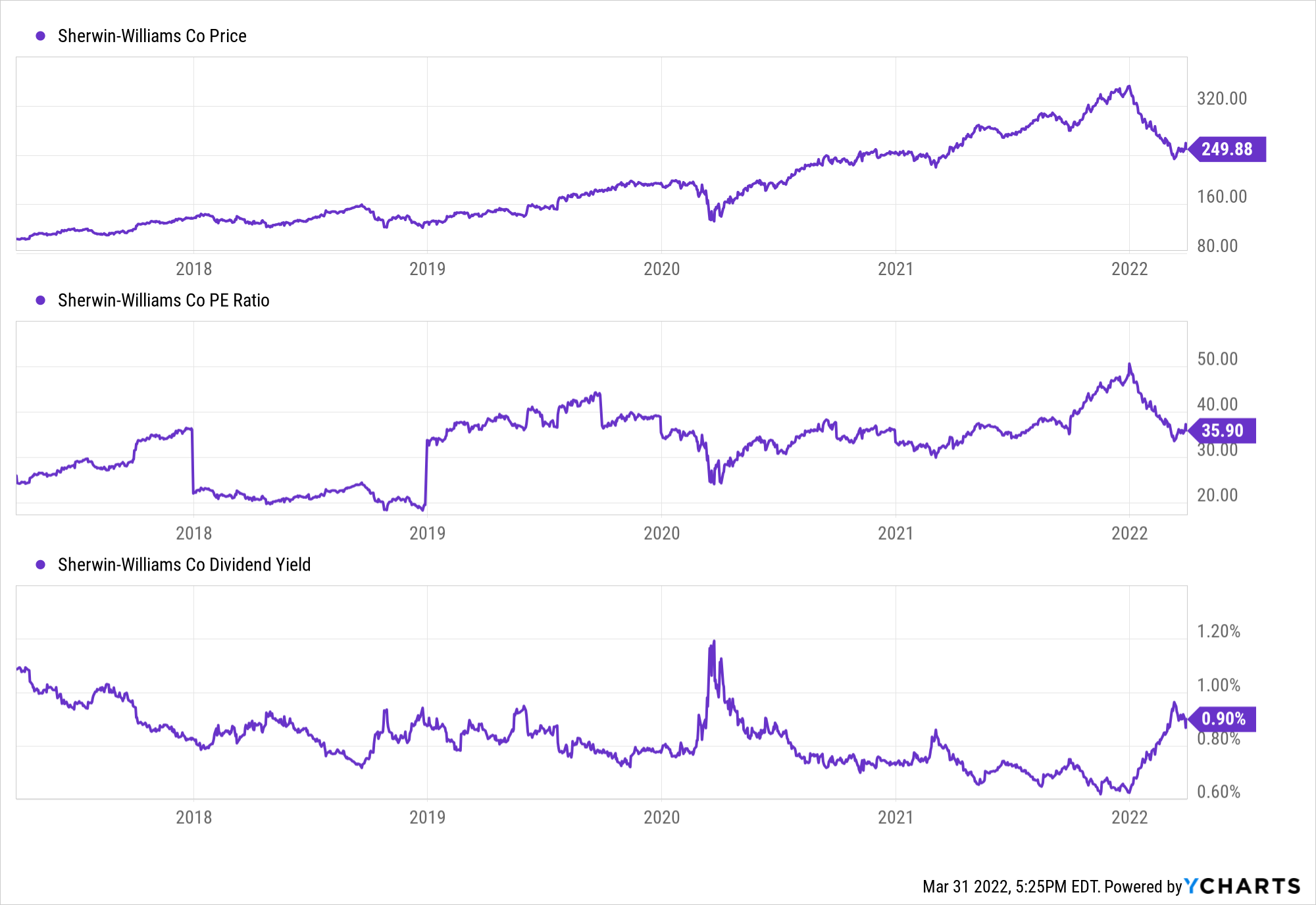 It’s worth paying up for. The drop hasn’t created cheapness – it’s simply gone from outrageously valued to reasonably valued. And like Warren Buffett, I’m never against paying a fair price for a wonderful business. This stock is finally worthy of being on one’s radar again after a severe drop that’s erased much of an undeserved runup.

Last but not least, let’s have a quick conversation about UGI (UGI).

UGI is a natural gas and electric power distribution company with a market cap of $7 billion.

Another boring business. But this is where so much money is to be made. After all, everyday life is pretty boring. And yet it’s everyday life upon which our $85 trillion global economy is based on.

A big requirement to keeping everyday life going? Energy, of course. And it’s basic utility businesses like UGI that literally keep the lights on. By the way, UGI ought to stand for U Got Income.

The gas and electricity company has increased its dividend for 34 consecutive years.

Steady-eddy business model. Steady-eddy dividends. As a long-term dividend growth investor, this is my bread and butter right here. The 10-year dividend growth rate is 7.1%, which is something they’ve been pretty consistent with. Not huge growth.

But this business does a good job of balancing growth with its stock’s yield – the yield is sitting at 3.9% right now. If you think that’s ordinary, think again – that yield is 120 basis points higher than its own five-year average, which is a material delta. With the payout ratio at 27.9%, this well-covered dividend is poised to continue increasing in its clockwork-like fashion.

Shockingly, this stock is down 27% from its 52-week high. 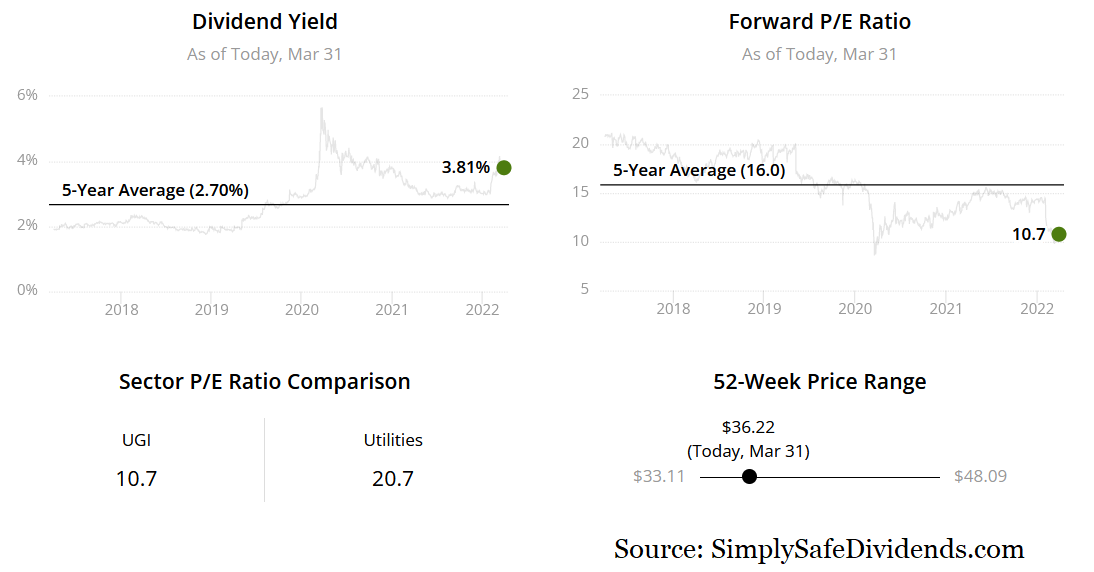 I say shockingly because the 52-week high of $48.55 wasn’t all that pricey in terms of valuation. However, with the stock now below $36, it looks downright cheap. If the yield didn’t give it away already, here’s the secret: UGI is valued at a level that’s well below its recent historical norms. GAAP EPS is a little wonky right now, but the P/E ratio of 7.1 should clue you in a bit more.

That’s well off of its own five-year average of 17.0. UGI is super, super consistent in terms of business growth and dividend growth, and that consistency is just not being properly valued or appreciated by the market. But I do appreciate it. And you should consider appreciating it, too.