Warren Buffett has been busy.

In all, he’s pumped more than $7 billion into Occidental Petroleum and now owns almost 15% of the company.

His buying has been so aggressive that he has pushed Occidental Petroleum’s share price higher as he’s kept adding more stock to his portfolio.

I recently discussed how I’m worried that Buffett is getting extra bullish at the wrong time.

But it’s clear that he wants to snatch up a whole bunch of Occidental Petroleum.

This purchase is in an industry that I’ve been pounding the table on for the past 18 months.

On March 21, Buffett gave himself a spring treat, giving his conglomerate Berkshire Hathaway (NYSE: BRK-B) the go-ahead to pay $11.6 billion to acquire 100% of the insurance company Alleghany Corp. (NYSE: Y).

With more than 50 years in the insurance business, Buffett knows the industry better than anyone alive.

We have been riding the insurance sector to big profits since I first pounded the table on it in early August 2020.

The three stocks that I singled out – American International Group (NYSE: AIG), MetLife (NYSE: MET) and Prudential Financial (NYSE: PRU) – have all easily doubled the performance of the S&P 500 since then. 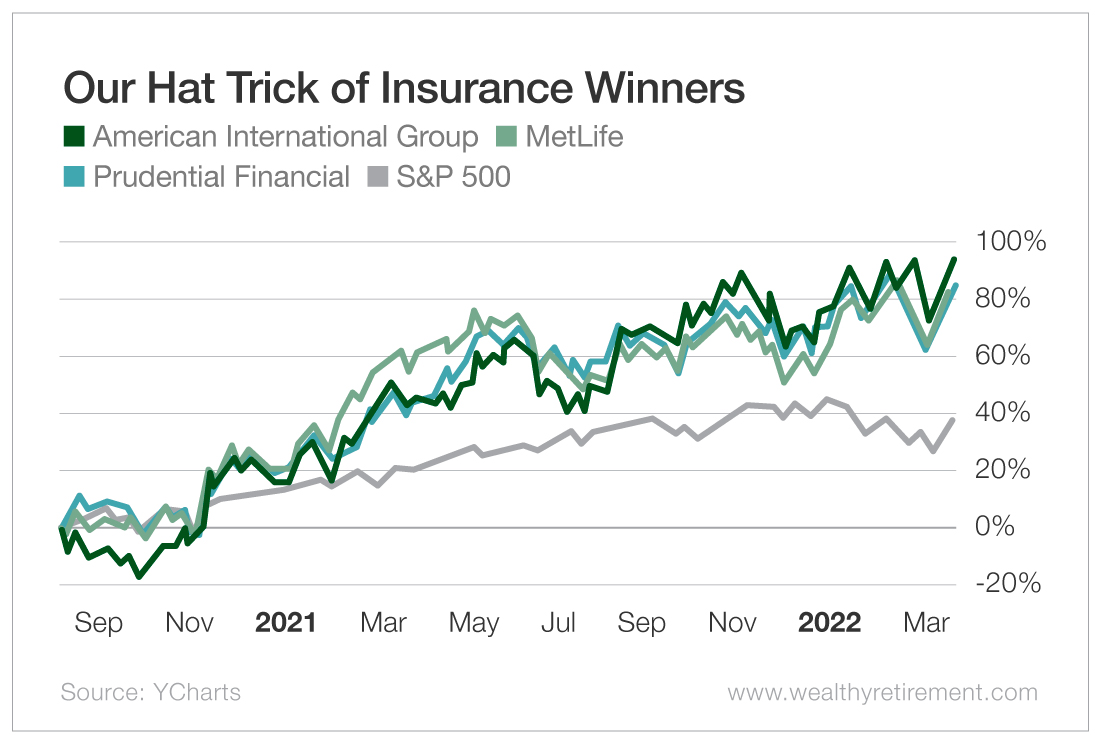 I loved these three insurance stocks because of their absurdly low valuations.

Here’s what I said:

Today, the stock market has served us an opportunity to get into this industry on the cheap. I mean really, really cheap.

Never before have insurance companies traded so inexpensively relative to the value of their net assets.

Net assets are more often referred to as book value. Book value is a common metric that investors use to value businesses.

Buying depressed stocks with low price-to-book ratios is a classic value investing approach that was pioneered by Benjamin Graham almost 100 years ago. (Benjamin Graham, of course, was Warren Buffett’s mentor.)

I researched how three of the largest publicly traded insurance companies are trading today relative to their net assets. They are all trading for under 0.5 times book value.

That means these stocks are selling at less than $0.50 on each dollar of net assets that they own.

Historically, these companies have traded at or above book value.

More importantly, with these stocks trading at $0.50 on the dollar and at historic lows, it seems to me that their long-term downside risk is almost nonexistent.

I said that these companies were cheap because they were trading at 0.5 times book value.

That’s so much higher than the 0.5 times book value that we were able to get into these insurance companies at.

Keep in mind, this is a savvy insurance investor paying a higher price than we did.

Despite our big wins with these three stocks, they all still trade at sizable discounts to the 1.26 times book value that Buffett just paid. 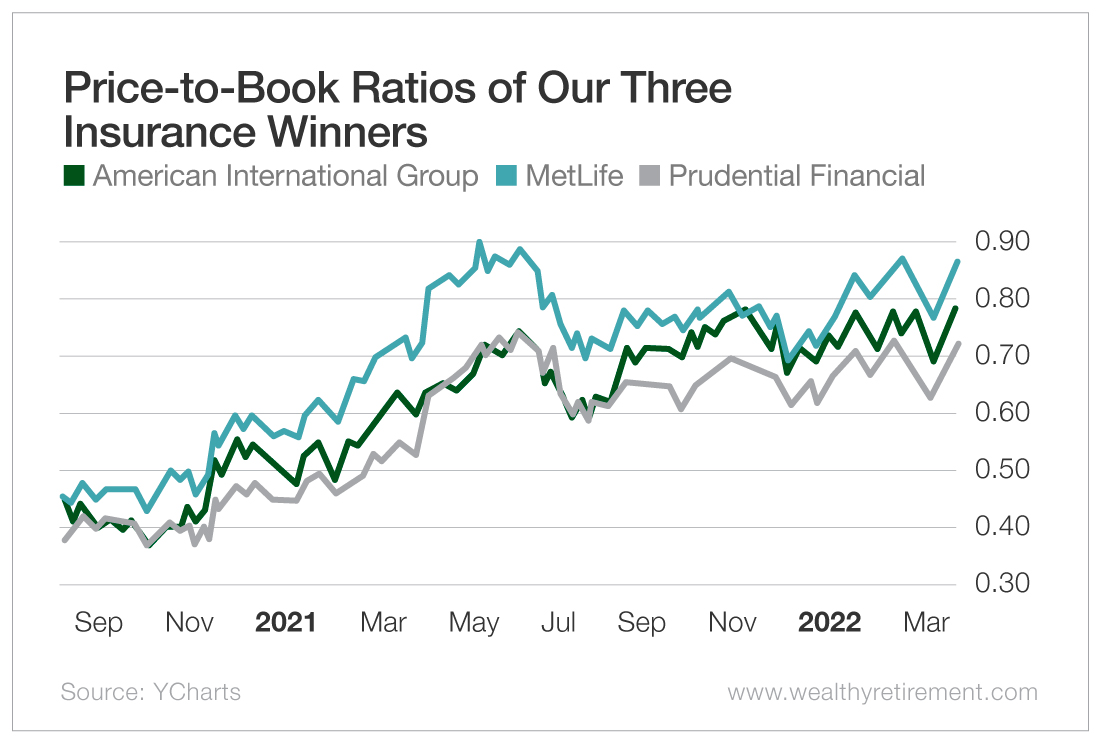 Therefore, if you are still holding these companies, I’d say there’s still upside left in them.

Plus, I suggested owning them in the first place partially because insurance companies are beneficiaries of rising rates and are great protection against the ravages of inflation.

These companies have massive fixed-income portfolios that will see revenues rise as interest rates head higher.

With the U.S. Federal Reserve indicating there are plenty of interest rate increases coming in 2022, the earnings of the insurance sector are about to take off.

I think our big insurance win is about to get bigger!