Writing about taking a new bullish position in Tesla (NASDAQ:TSLA) after this rally requires finesse. It is difficult to safely chase TSLA stock this late after 10 green days in a row.

The more impressive part is this is in the face of rising global risks. So, while I may sound slightly bearish today, I assure you I am not. TSLA stock is a solid long-term investment, but I would seek a better short-term entry point.

The bottom-line decision to buy a new position in Tesla now depends primarily on the individual time frame. I dislike severely to see a new position quickly turn red, even if it works out in the end.

Before we discuss that though, let’s state the fundamental reasons to be bullish. Those who still criticize TSLA stock either for its profitability or the tax breaks it gets are missing the point.

Two years ago, they may have had a leg to stand on with these arguments. However, now Tesla is a completely different company because it controls its own destiny.

TSLA Stock Is a Beast

The turning point for me was when Tesla started flowing $6 billion in cash from its own operations. Last year, it doubled that to just shy of $12 billion. This frees it to execute on its plans without banking hindrances.

This is an extremely important subject in a rate-hike monetary tightening cycle. I am not trying to make the argument that it’s cheap from the traditional sense. Its 21x price-to-sales ratio is at the higher end of other giga-cap companies, but not exorbitantly expensive. Can it get cheaper? Absolutely, but it doesn’t need to do that for a while.

Paving the way for all electric vehicles like it has been doesn’t come cheap. Toyota (NYSE:TM) cracked the door open with its Prius effort. It made it acceptable to buy an alternative fuel vehicle en masse. Tesla took that momentum and busted that door wide open and off the hinges.

A few years ago, critics considered Tesla CEO Elon Musk a detriment. But in fact, he turned out to be the differentiating asset. He broke rules, but made it work in the end.

I confess I was not a fan of Tesla in the beginning. But when I saw the evidence I am citing here, I changed my mind years ago. Even when I didn’t like the concept, I only traded it from the bullish side. Why? Because I understand the love the fans have for TSLA stock.

It Deserves a Short Rest 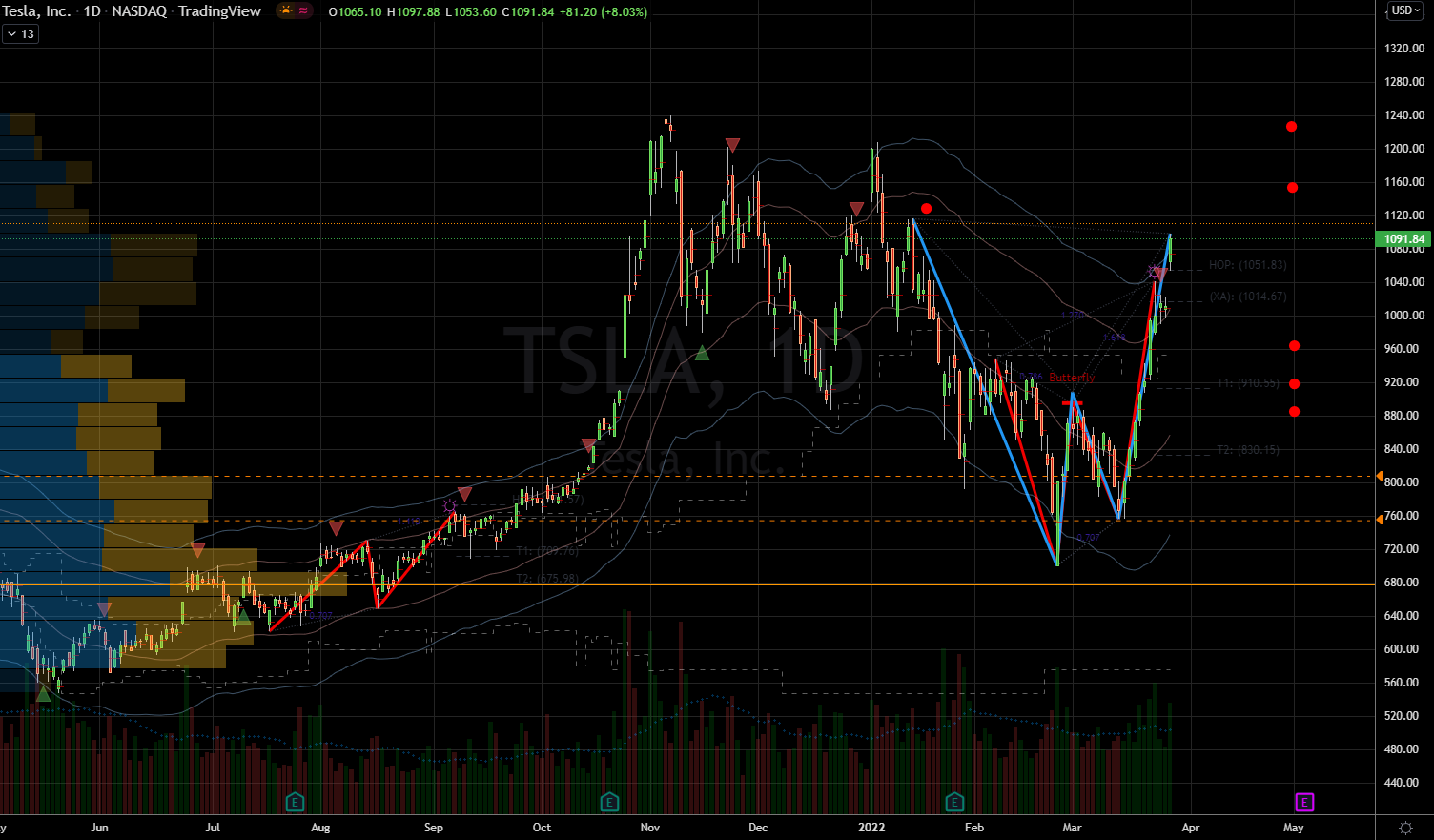 Case in point, Tesla has rallied more than 40% in under two weeks, and 8% just yesterday. This is not a one-off situation, because it does things like this often.

But here comes the note of caution, especially to those looking to initiate new positions. At these levels, new buyers may suffer short-term setbacks. They picked the right stock, but possibly not an optimal entry point.

Technically, TSLA stock is running right into prior failing zones. It has had difficulty the last four times it was up here. Therefore, the proper assumption is this will happen again. So instead of buying it into resistance, it’s better to wait out a few ticks. If the goal is to own it a long time, why not try and get a better price?

I expect a dip to retest levels under $960 per share in the next three weeks. This could even start this week, and as a trader I would be looking for entries into that. I have been enjoying actively trading rather than owning for the long term. Those of us who do that can trade around this week’s action. This is a matter of preference, and I don’t fault the alternative methods of buy-and-hold.

The Bottom Line on TSLA Stock

My primary concern for all stocks now comes from outside factors. As good a bullish thesis Tesla has, it could drop for reasons outside its control.

Russia’s invasion of Ukraine continues, and Covid-19 is making a comeback in China. On top of that, the Federal Reserve declared all-out war on inflation.

These are not safe environments to trust new positions near all-time highs. Again, I reiterate my bullish stance on TSLA but remain cautious short-term.