The U.S. dollar was murdered more than 50 years ago…

It was August 15, 1971, and it could have been a scene from The Godfather. The killers had been called to Camp David – a remote, wooded setting 50 miles northwest of Baltimore.

All five of the major family bosses had been summoned. Those present included John Connally from the U.S. Treasury family, Arthur Burns and Paul Volcker from the Federal Reserve branch, George Shultz from the Office of Management and Budget, and Peter Peterson from the Wall Street family.

The future secretary of state, Henry Kissinger, was there by phone as consigliere and representative of international interests. Of course, the bosses’ aides and henchmen were also present.

All were brought together on that hot, mid-August weekend by the only man in the world with the power to do so… the boss of all bosses, President Richard Nixon.

Their goal was to resolve three of the country’s worst economic problems – before Nixon’s 1972 presidential reelection campaign. Inflation was high and rising. Unemployment was high and growing. And Fort Knox was running out of gold, as other countries were taking the gold that backed the U.S. dollar.

If government leaders did nothing, the U.S. economy would continue to deteriorate. And Nixon could kiss his reelection goodbye.

The three days of discussion had far-reaching consequences. And we’re still seeing the effects today. It all came down to three major changes…

First, wages and prices were frozen for 90 days to combat the 6.1% unemployment and the 5.8% inflation rates.

Second, these Republican Party leaders, who normally supported free trade, set a 10% surcharge on all imported goods. This was so American-made products wouldn’t be at a price disadvantage versus foreign-made goods if currencies reacted negatively against the U.S. dollar.

Third, they closed the “gold window” – the imaginary bank-teller window in the U.S. Treasury building where nations brought in their paper dollars and left with Fort Knox gold.

This was the most significant action taken on that August weekend in 1971. And the edict survives today. As a result, no nation can exchange its paper dollars for U.S. gold. By ending the dollar’s convertibility into gold, these leaders set it adrift.

At the time, the public hardly noticed the gold change. The freeze on wages and prices had the most immediate effect on people’s lives.

Plus, 38 years earlier, President Franklin D. Roosevelt had already ordered all Americans to turn in their gold for $20.67 per ounce in paper money. In 1971, there was little reason for the public to protest – or even care.

On January 30, 1934, FDR had followed up the confiscation by raising the statutory gold price to $35 per ounce. He hoped to encourage miners to increase production and exchange their ounces for $35 in currency.

This immediately devalued the dollar by 40%… But it made holding U.S. dollars as monetary reserves more attractive to foreign central banks. That’s because their greenbacks could be readily exchanged for U.S. gold at the new fixed $35-per-ounce price. In a time of need, central banks are always more concerned about an asset’s liquidity than its price.

That’s why closing the gold window in 1971 was a necessity. Over the decades, so many dollars had been printed and exported to buy foreign goods and services – and to fight the Vietnam War – that Fort Knox no longer had enough gold to redeem all the foreign-held greenbacks.

In 1945, the U.S. had more than half of the world’s official gold reserves. But by 1971, the dollar’s “good as gold” status was threatened. That July, Switzerland redeemed $50 million for gold… And France followed later that month by exchanging $191 million of paper for the metal.

This drip-drip depletion got worse between 1968 and 1970, as the metal was generally trading between $35 and $43.75 in the open markets. Some smaller governments were even arbitraging the price difference… cashing in dollars for gold at $35 and then selling the ounces for an immediate profit of 10% to 20%.

At the end of that weekend at Camp David, President Nixon announced the changes in a televised speech to the nation. He said the decisions were to “protect the position of the American dollar as a pillar of monetary stability around the world.”

The bosses’ actions worked. Inflation slowed for a short while, and unemployment was stabilized. Voters approved… and on November 7, 1972, Nixon was reelected.

While gold has zagged lower at certain points, that’s just due to short-term traders selling. Long-term investors know to buy these dips. The economic policies that drive gold higher are unchanged.

Of course, the paper dollar didn’t really die. But as a fiat currency, its purchasing power was destroyed… unanchored to anything to give it value. Gold’s price has soared, while the value of the dollar has fallen.

Over the 50 years following that 1971 meeting, the ending of the dollar’s direct link to gold had consequences for investors and their savings that continue today… 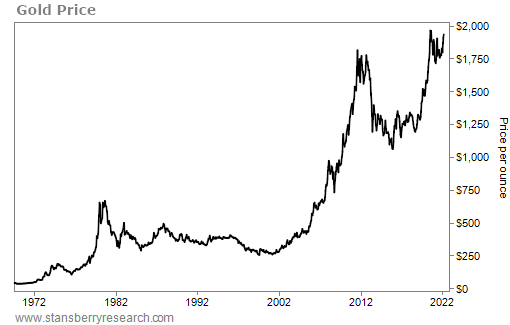 One constant factor driving gold is that politicians’ No. 1 job is to get reelected. To do so, they’re always trying to get nine slices out of an eight-slice pizza and reward voters. This economic trickery requires policies that are either inflationary or involve deficit spending… or both. The gold price is the barometer that shows the impact of these policies. 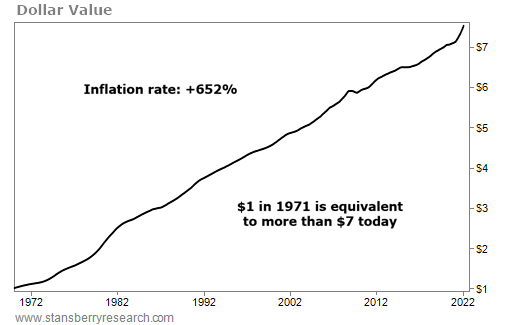 And in the next chart, you can see the dollar has lost 86% of its purchasing power over that period… 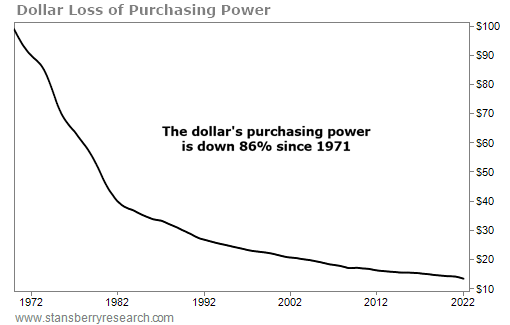 How can an investor protect his savings? By owning assets that grow in value faster than the dollar falls. Traditionally, you do that by owning the right real estate… income-producing assets… solid stocks… and, of course, gold.