Higher inflation has been rough on all of us.

Gas, food, and housing costs are through the roof. Consumer inflation was up 7.9% year over year—the worst it’s been in about four decades.

As it turns out, inflation wasn’t transitory after all.

As noted by CNBC: Allianz Chief Economic Advisor Mohamed El-Erian: “The characterization of inflation as transitory is probably the worst inflation call in the history of the Federal Reserve, and it results in a high probability of a policy mistake.”

While the Fed hiked interest rates by a quarter point this month, it’s not enough.

In fact, as Chairman Jerome Powell told the National Association for Business Economics, “The labor market is very strong, and inflation is much too high. We will take the necessary steps to ensure a return to price stability.

In particular, if we conclude that it is appropriate to move more aggressively by raising the federal funds rate by more than 25 basis points at a meeting or meetings, we will do so. And if we determine that we need to tighten beyond common measures of neutral and into a more restrictive stance, we will do that as well.”

So, what’s the best way to potentially profit from rising rates?

One way is to invest in the Financial Select Sector Fund (XLF). That’s because financial stocks can thrive with higher interest rates. 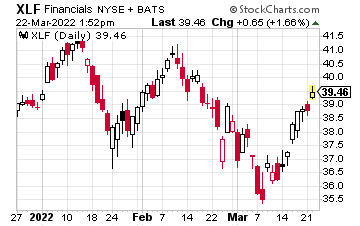 Look at Bank of America, for example.

Analysts are bullish on BofA because it’s extremely sensitive to interest rate hikes.

According to Barron’s: “With it widely expected that the Fed will raise interest rates at least three times this year, Bank of America would be poised to benefit more than peers.…

Meanwhile, Bank of America has estimated that an instantaneous 100 basis-point increase—which would be equivalent to roughly four hikes—would improve net interest income by $7.6 billion over 12 months.” As the Federal Reserve gets more aggressive with rates, do keep an eye on financial stocks.