The volatility of late has been off the charts, right? After briefly hitting correction territory in early January before a rebound, the S&P 500 is headed back that way.

Now, many high-quality dividend growth stocks – the stocks I make videos on and personally invest in – have held up relatively well. But not all of them. Some names are down heavily from recent highs.

However, if you’re a long-term investor with a multidecade time horizon, this short-term volatility could be your long-term opportunity. After all, all else equal, lower prices result in higher yields.

And if you’re interested in one day living off of dividends, that gets you to your goal that much faster.

Today, I want to tell you about five dividend growth stocks that are down more than 20% from their recent highs. Ready? Let’s dig in.

The first dividend growth stock I want to highlight is Albemarle (ALB).

Albemarle is a specialty chemicals manufacturing company with a market cap of $22 billion.

Albemarle isn’t your typical chemicals company. That’s because of one key differentiator. They’re one of the largest lithium producers in the world. And with EVs taking off, along with the fact that electronics of all types dominate our everyday lives and rely on lithium for batteries, demand for lithium is skyrocketing. That bodes well for Albemarle and their ability to continue increasing their dividend.

The company has increased its dividend for 27 consecutive years.

This is a Dividend Aristocrat. With huge lithium exposure. That’s a very appealing and unique combination. Now, the yield of 0.8% won’t knock your socks off. Even the 10-year dividend growth rate of 9.4% isn’t something that’s going to really wow you. And heavy investments in bringing up capacity is weighing on free cash flow.

So what’s the draw? Well, this is a long-term compounder with a double-digit CAGR over the last decade. And if you believe in the future of lithium, they could be just getting started. Meantime, the recent drop has made today’s entry point more attractive. 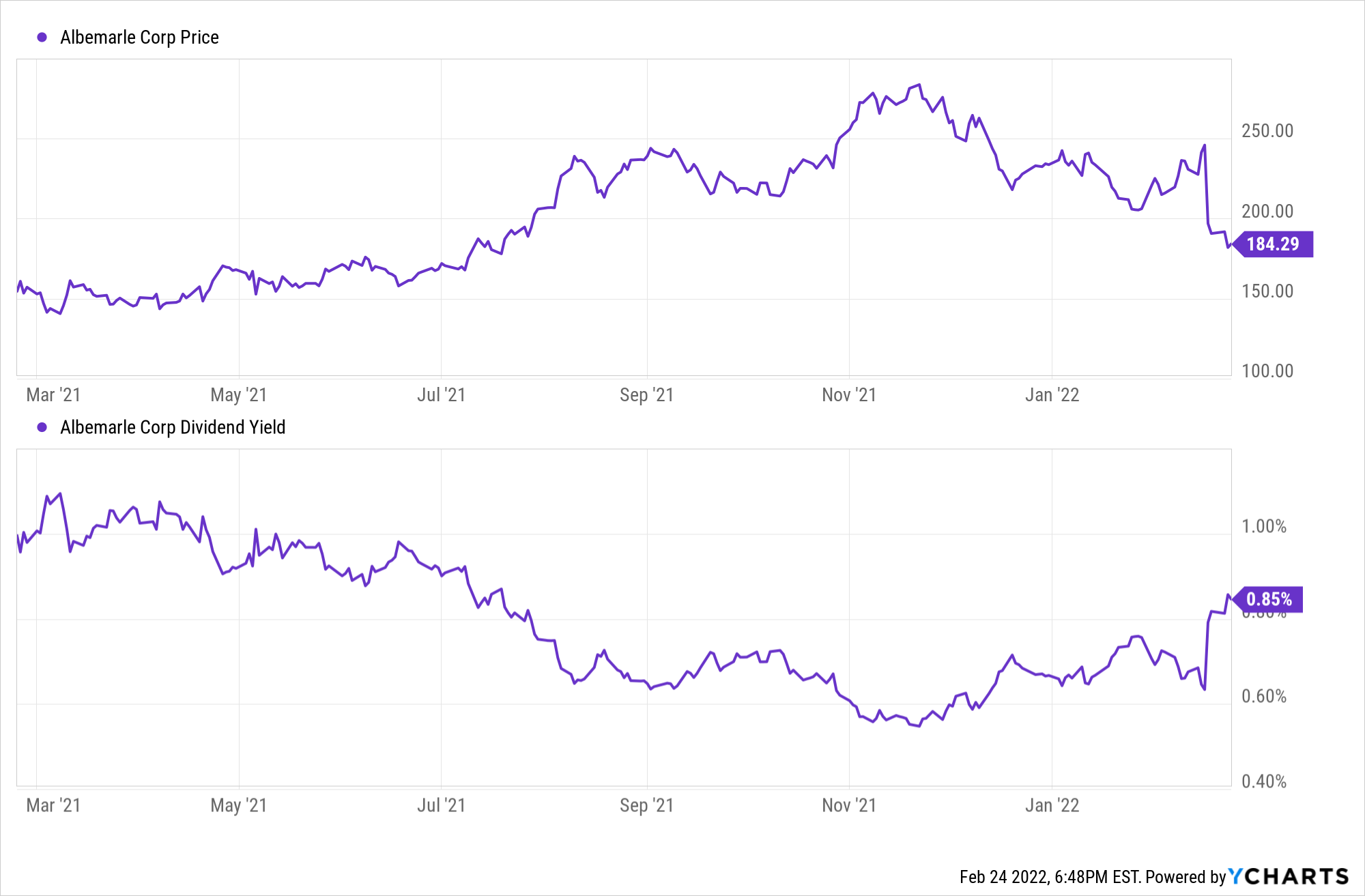 The 52-week high of $291.48 is a distant memory. We’re now at just under $191/share for the business. That’s a $100/share difference. The complaint I’ve repeatedly heard about Albemarle is the high stock price. Well, it’s no longer so high. But the thing with a lot of investors is that they complain when stocks are highly priced and then shy away after they’ve dropped.

So it’s this paradoxical thought process that I’ve never understood. If you don’t like high prices or low prices, you’re never going to find a good time to invest. A lot of the basic valuation metrics for Albemarle have come way down and are now closer to their respective recent historical averages. If you want a Dividend Aristocrat with big lithium exposure, Albemarle is the only choice you really have. Take a look, if you haven’t already.

Next up, let’s have a conversation about American Tower (AMT).

American Tower is a communications infrastructure real estate investment trust with a market cap of $104 billion.

American Tower is the world’s largest REIT by market cap. Despite that, it doesn’t seem to get very much attention. So why is it so big? Well, it’s because they have a fantastic business model. Our modern-day society basically cannot function without all of the mobile data we rely on. And that mobile data doesn’t get delivered by magic. This requires towers, upon which equipment is installed. And American Tower collects rent from companies that use their towers. It’s a highly profitable business model, which has allowed American Tower to reward shareholders handsomely.

The REIT has increased its dividend for 12 consecutive years.

What’s really appealing about this REIT for dividend growth investors is the fact that they tend to increase their dividend quarterly. And those quarterly dividend raises add up – the 10-year dividend growth rate is an astounding 30.5%. You also get a market-beating yield of 2.4% to go along with that double-digit dividend growth. And with AFFO covering the dividend almost twice over, the dividend is positioned to continue heading higher. 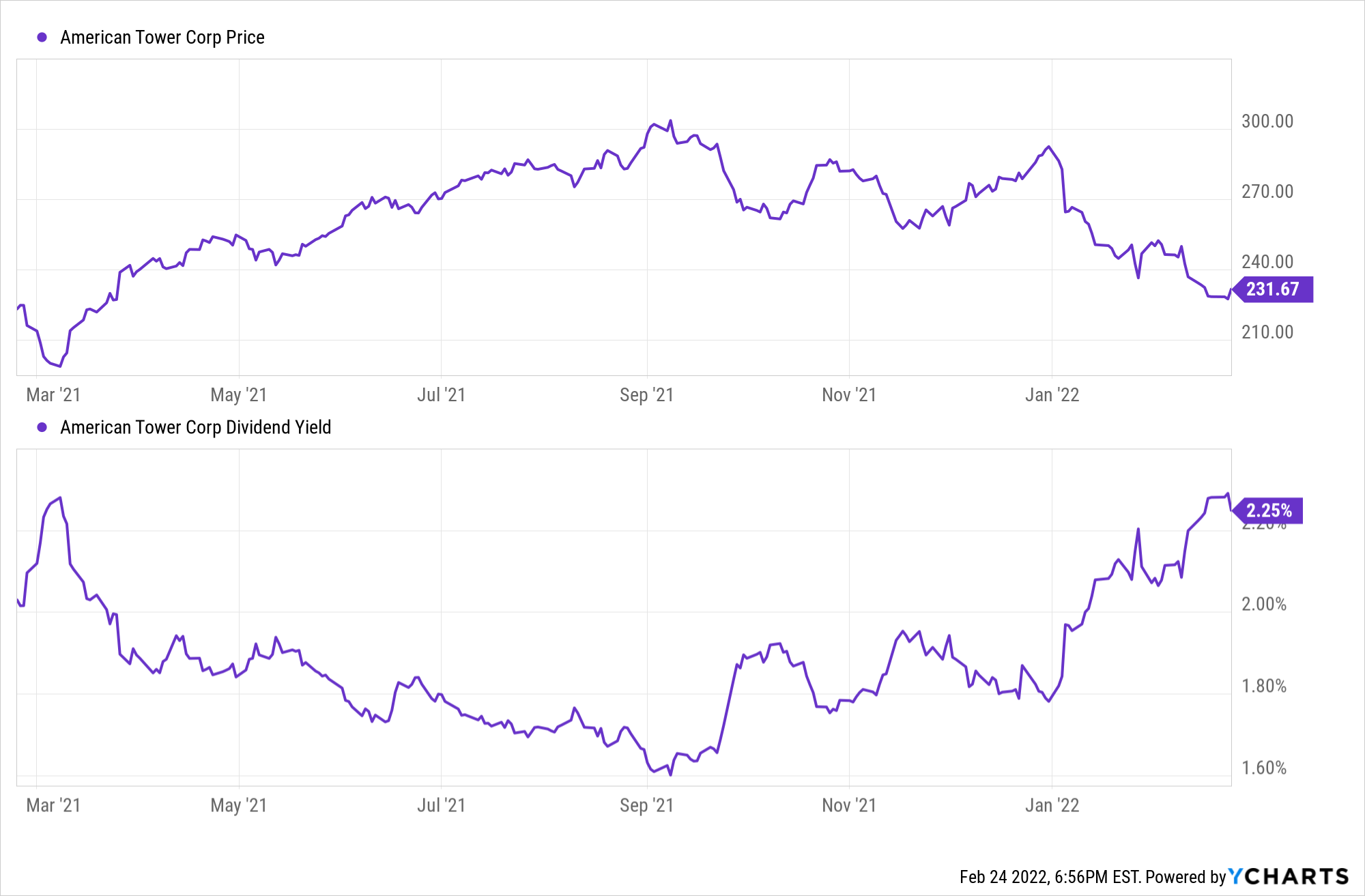 American Tower is rarely down so much. And the crazy thing is, their future is arguably as bright as ever, as 5G is just now rolling out. The current share price of a bit over $228 is well off of the 52-week high of $303.72. Now, I think American Tower was pricey at that 52-week high. And I’m not sure who was buying it up there.

On the other hand, the pendulum has swung pretty hard the other way – and the stock looks undervalued. That aforementioned 2.4% yield, for instance, is 50 basis points higher than its five-year average. And the P/CF ratio of 19.5 is in the same range as a lot of other REITs, even though this particular REIT often gets a premium multiple. For perspective, its five-year average P/CF ratio is 24.2. American Tower could be a towering deal in the REIT space after its correction.

The third dividend growth stock I want to bring to your attention is BlackRock (BLK).

BlackRock is a multinational investment management corporation with a market cap of $115 billion.

This is an absolute juggernaut in the asset management space. We’re talking $10 trillion in assets under management. That easily makes them the biggest in the world. And the asset management space is a space where scale really matters. As the global economy continues to exponentially expand, BlackRock stands to do very well. And their shareholders stand to do very well, too, largely via the growing dividends they continue to collect.

The asset manager has increased its dividend for 13 consecutive years.

BlackRock’s dividend metrics are highly impressive. The 10-year dividend growth rate is 11.6%. And the yield of 2.6% beats the market and its own five-year average. Meanwhile, the payout ratio is 51.9%. That’s nearly a perfect harmony, balancing retaining earnings for business growth and rewarding shareholders with rising dividends. 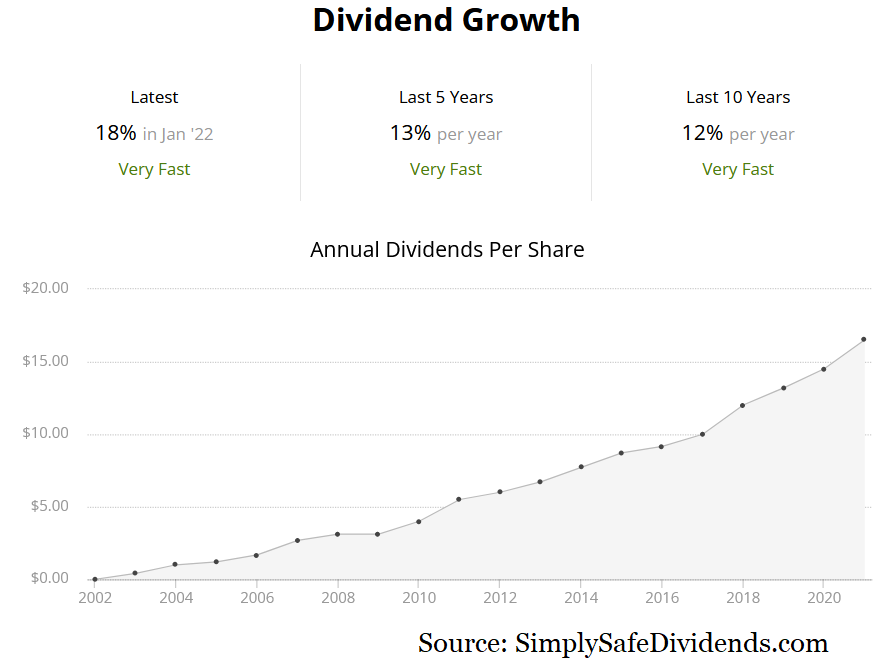 It seems like the market doesn’t care, though, as the stock is down 22% from its 52-week high.

The 52-week high is $973.16. But shares are now going for about $756/each. That’s a haircut of more than $200/share. Huge. But what has this done? Well, it’s created an opportunity for long-term investors looking to accumulate shares in this world-class asset manager. Indeed, we’re putting out a video on BlackRock, showing why the business could be worth $1,021.36/share. So make sure to check that video out, because the business looks more than 30% undervalued right now.

The next dividend growth stock to talk about is Caterpillar (CAT).

Caterpillar is a leading manufacturer of heavy equipment, with a market cap of $103 billion.

One of my investment heroes, Peter Lynch, always recommended to invest in what you know. Well, who doesn’t recognize the big, yellow machines that Caterpillar manufactures? It’s a very simple concept. As long as the world will continue to dig into the ground and build things up, Caterpillar will have to continue making the heavy machinery that allows for this to happen. That means the heavy dividend should continue to flow and grow for years to come.

Caterpillar has increased its dividend for 28 consecutive years.

The Dividend Aristocrat offers a 2.3% yield, which is right in line with its five-year average. Along with that market-beating yield comes a 10-year dividend growth rate of 9.0%. You’re getting a double-digit combination of yield and dividend growth there, which is very nice. And with a low payout ratio of 37.5%, Caterpillar has no issues whatsoever with funding the dividend or the growth of it.

This Dividend Aristocrat is now 22% off of its 52-week high. 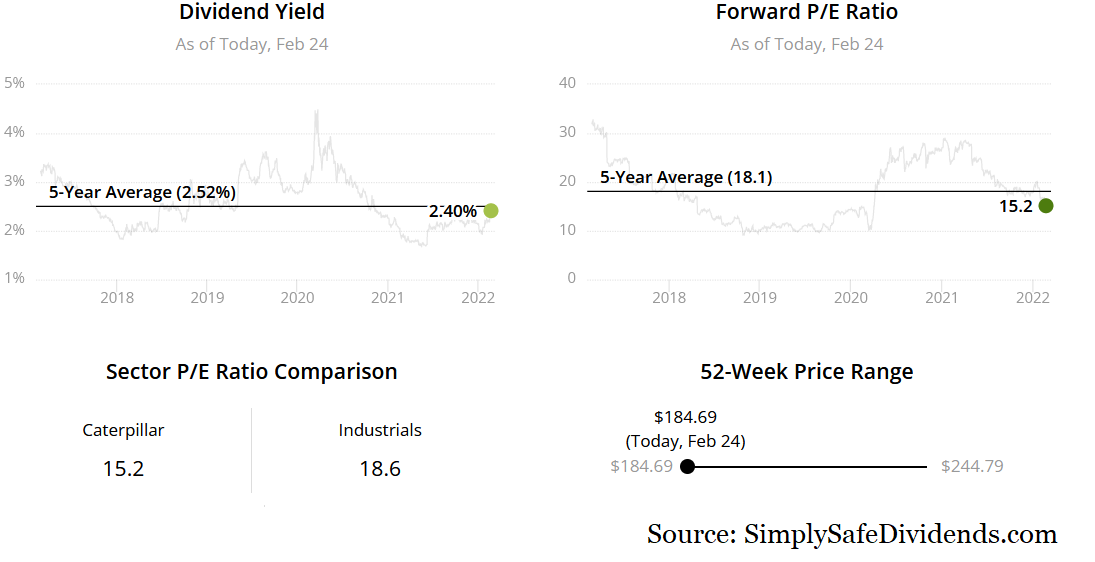 The 52-week high for the stock is $246.69. But shares are now trading hands for slightly under $192/each. What this drop has done is, it’s made shares more reasonably valued. I wouldn’t say that Caterpillar is extremely cheap or anything here. But it’s certainly a a more sensible idea now.

Most basic valuation metrics are within a short distance of their respective recent historical averages. As I already noted, the yield is right in line with its five-year average. In my view, the stock has gone from overvalued to something that’s close to fairly valued. And I’ve never found myself regretting paying a fair price for a wonderful business.

Last but certainly not least, I have to tell you about Williams-Sonoma (WSM).

Williams-Sonoma is a home furnishings retailer with a market cap of $10 billion.

In my opinion, this is one of America’s best niche retailers. They’ve operated at a very high level for a very long time. It’s just that they’ve elevated the business to another level altogether over the last two years or so, as the pandemic exacerbated certain trends and resulted in a pull-forward of sales. But this isn’t just a pandemic story. This is a long-term story. And that goes for their dividend, too.

The company has increased its dividend for 16 consecutive years.

Their impressive 10-year dividend growth rate of 13.9%, which obviously mostly predates the pandemic, shows you just how much of a long-term story this is. Even after all of that aggressive dividend growth, the payout ratio is still only 21.4%, which is incredibly low. And the stock even yields 2%, which easily beats the market. You get a market-beating yield and inflation-beating dividend growth here. Hard to go wrong with that.

This stock has been absolutely hammered and is now down 37% from its 52-week high. 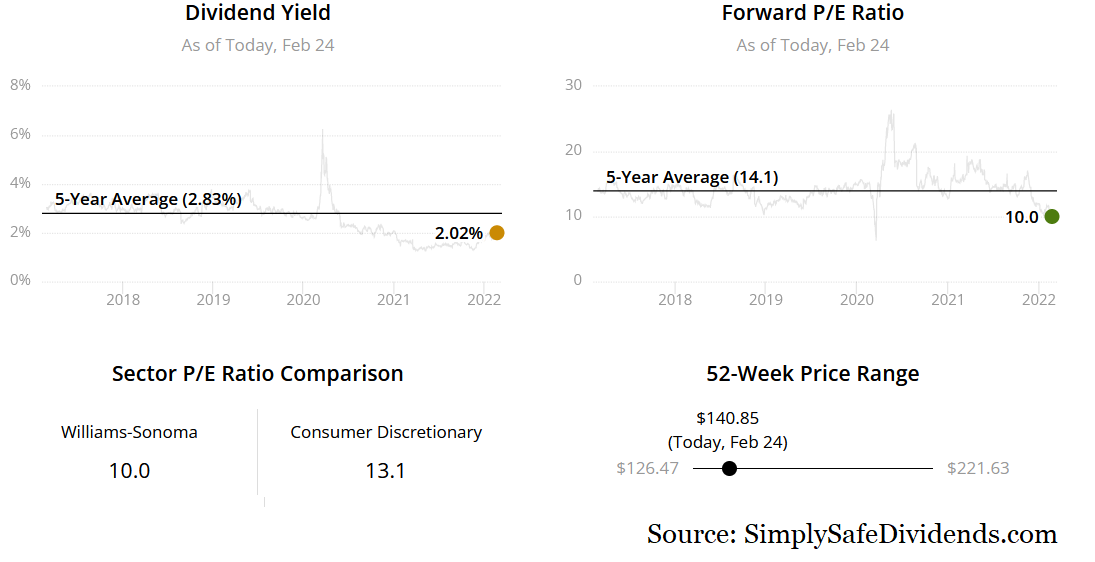 Shares are now trading hands for about $140/each, which is substantially lower than the 52-week high of $223.32. Now, let me be clear. I don’t think the stock should have ever been as high as it was. Market sentiment is kind of like a pendulum.

And this pendulum isn’t known to stop precisely at fair value – on either side. I’m putting together a full analysis and valuation video on this business as we speak, and I’ll be showing you why shares look to be worth much more than they’re selling for. Meanwhile, let me just say that if your portfolio doesn’t already have this great retailer in it, this drop could be your chance to consider changing that.