A “wage-price spiral” can become a vicious cycle. And today, we’re starting to see signs of just that…

You see, prices started to rise back in the late 1960s. At the time, President Lyndon Johnson was spending aggressively on social welfare programs and also on the Vietnam War. This high rate of spending persisted during the first few years of the 1970s with Richard Nixon at the helm.

With all of this cash flooding the economy, folks had more money to spend. It led to more demand for goods and services. And that pushed overall prices higher.

As a result of higher prices, workers demanded more pay from their employers. They wanted to be able to afford their groceries and other necessities…

Employers had no choice but to raise wages. But to help offset that cost, they had to pass it on to consumers in the form of higher prices.

Then as prices rose again, workers demanded higher wages. And on and on it went…

Both wage growth and inflation spiked more than 10% during the 1970s.

The chart below shows the relationship between wages and inflation. You can see how they moved in tandem over that decade… 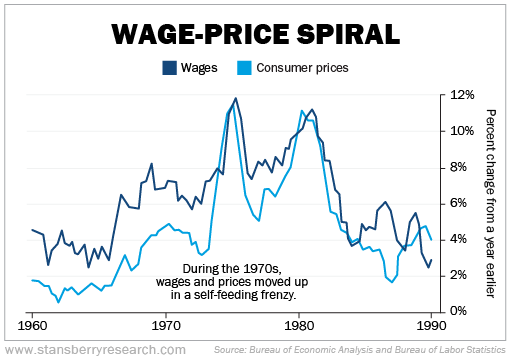 With so many people leaving the workforce as a result of COVID-19 (many folks have simply retired early), we’re in a competitive job market. As a result, wages have been on the rise. 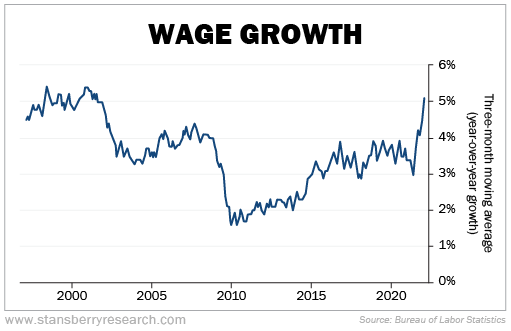 And of course, inflation is running wild. The consumer price index (“CPI”) rose 0.6% in January, driving up annual inflation by 7.5%. That marked the biggest gain since February 1982. And it was higher than what most folks on Wall Street expected.

Plus, if you strip out food and energy costs, which can be volatile, the CPI increased 6%. That also beat expectations.

The good news is, it’s unlikely that it would ever get as bad as the 1970s. Back then, the Federal Reserve was asleep at the wheel to let inflation spike as high as it did. Although I don’t have much trust in the Fed today (or faith in any government operation), it isn’t unaware of what’s going on today.

The Fed has signaled that it’s going to be aggressive getting inflation under control. Some forecasters are predicting the Fed will increase interest rates five, six, or even seven times over the course of 2022.

Only time will tell how aggressive or effective the Fed will be.

For now, we’re in a time of high inflation. We have to sit back and watch how the Fed responds over the next few months. We’ll soon find out if inflation will slow… or if this vicious cycle will spin out of control.