A year ago, in February 2021, I wrote about how commodities were poised to outperform.

My opinion at the time was shared with and, to some degree, borrowed from a duo of superior commodity investors.

Over a 30-year period, Druckenmiller’s hedge fund generated an annualized rate of return of 30%.

And get this… Over that entire 30-year stretch of managing money, he avoided a single down year!

So when he speaks, I listen.

The second investor who shared my opinion in early 2021, commodities guru Jeff Currie of Goldman Sachs, asserted that the world had just entered a long-term bull market for commodities.

Currie pointed to the fact that producers of virtually every commodity had massively underinvested in new supply since the last commodities boom ended with the Great Recession in 2008.

He also accurately predicted that widespread easy money policy by governments, as well as huge spending required for the transition to renewable energy, would stimulate commodity demand.

He concluded that a major commodities bull market had been unleashed thanks to crimped supply and strong demand.

One year later, it appears Currie and Druckenmiller were correct…

Commodities, as represented by the Invesco DB Commodity Index Tracking Fund (NYSE: DBC), have soared by 48% in the last 12 months. 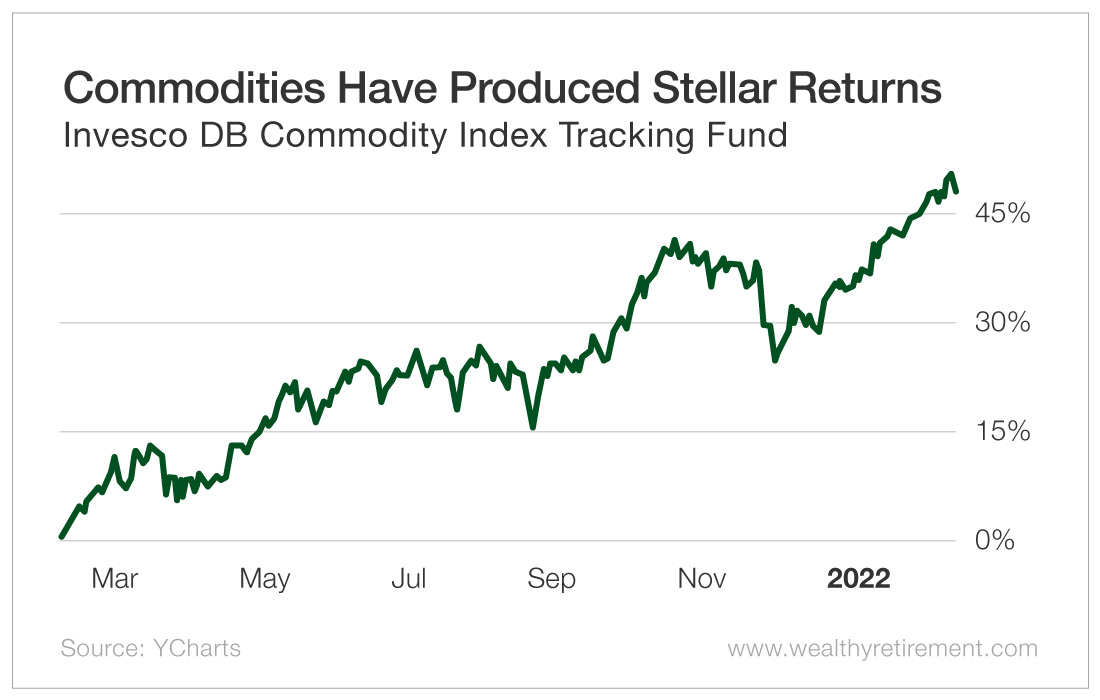 Currie is now even more bullish on the asset class.

He recognizes that the world of today is facing critical shortages of virtually every commodity.

Here are his exact words:

I’ve been doing this 30 years and I’ve never seen markets like this. This is a molecule crisis. We’re out of everything, I don’t care if it’s oil, gas, coal, copper, aluminum, you name it we’re out of it.

That doesn’t sound promising for our chances of quickly resolving the current inflation crisis.

The Transition to Renewables Will Drive Commodities

The driver of many commodities in the years ahead will be the pivot to renewable energy.

As I’ve previously written, this move to renewables is bullish for virtually all commodities, even those that renewables are meant to replace.

The build-out of renewables is creating a new source of demand for copper, lithium, nickel and other metals.

My favorite data point is what electric vehicles (EVs) and wind and solar energy mean for copper demand.

It takes four times as much copper to manufacture an EV as it takes to make a traditional combustion engine automobile.

With hundreds of millions of EVs rolling off assembly lines over the next decade, we are going to see a surge in copper demand.

On top of that, renewable energy sources, like solar and wind, use five times as much copper as fossil fuel alternatives.

And speaking of oil, the “green revolution” is bullish for that commodity too. Same for natural gas, and probably even coal to an extent.

With the long-term future of hydrocarbons in question, the oil and gas majors have been slashing spending.

Plus, many major institutions are no longer willing to supply capital to the sector due to tightening environmental, social and governance standards.

That lack of capital means less money is available for new supply. And as we all know, a shortage in supply drives up prices.

The renewable transition is as bullish for pollutive commodities as it is for commodities tied to clean energy.

That’s why this commodity bull market could last for an extended period of time.