After more than a decade of investing experience, I’ve learned a few lessons.

One lesson can be summed up by one of Warren Buffett’s best quotes.

“When it rains gold, put out the bucket, not the thimble”.

It’s easy, with the benefit of hindsight, to wish you could go back in time and invest more aggressively when stocks were on sale.

It’s much more difficult to operate with this mentality in real-time.

Never once have I thought that I would be better off had I invested less when the market took a beating.

“My stock portfolio would be so much better if it only had less shares in great businesses,” said nobody… ever.

So when volatility cranks up, I crank up the capital deployment.

This mindset has helped me to build out my FIRE Fund.

That’s my real-money portfolio, which produces enough five-figure passive dividend income for me to live off of.

Indeed, I do live off of dividends – even while I’m still relatively young.

I was actually able to retire in my early 30s.

And I share in my Early Retirement Blueprint exactly how I achieved such an early retirement.

You can find hundreds of these stocks on the Dividend Champions, Contenders, and Challengers list.

Simply put, these are some of the best stocks in the world.

As great as these stocks are, though, valuation at the time of investment remains critical.

Price only tells you what you pay. Value is what you actually get. 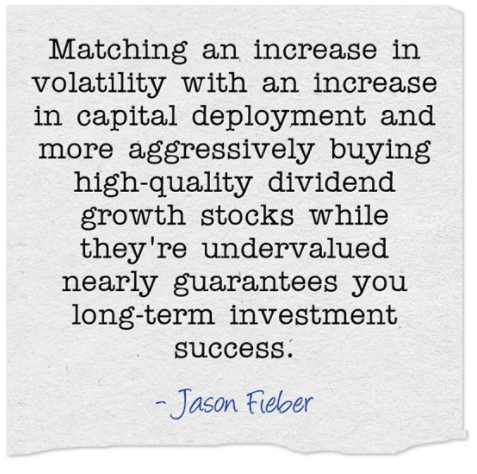 Now, doing this does require one to have an understanding of valuation in the first place.

Fortunately, it’s not that difficult.

As part of a comprehensive series of “lessons” on dividend growth investing, it provides a template that you can use to estimate intrinsic value of just about any dividend growth stock out there.

Founded in 1988, BlackRock is now a $117 billion (by market cap) investment management behemoth that employs 18,000 people.

With approximately $10 trillion in assets under management, BlackRock is the largest asset manager in the world.

BlackRock has a wonderful business model.

Asset management is highly appealing because of its structure.

Like all other asset managers, BlackRock charges fees to manage assets.

And the fee base is is exponentially rising.

That’s because BlackRock has tremendous exposure to global equities.

Global equities are compounding as the planet’s population grows and our collective economic output rises.

The fee base is compounding.

In turn, BlackRock’s fees are compounding.

But it’s a concept that’s supercharged for BlackRock, due to their immense scale.

However, being the largest boat in that tide, BlackRock stands to disproportionately benefit from this.

Obviously, this sets them up to continue increasing their revenue, profit, and dividend for years and years into the future.

Already, BlackRock has increased its dividend for 13 consecutive years.

And they’re off to a great start.

While that’s solid in and of itself, there’s been a pronounced acceleration in the dividend growth – the most recent dividend increase was over 18%.

That’s almost twice as high as the broader market’s yield.

And the payout ratio is 51.9%, which is almost a perfect balance between retaining earnings for growth and returning money back to shareholders, giving the company plenty of room for future dividend increases.

I really like dividend growth stocks in what I refer to as the “sweet spot” – a yield of between 2.5% and 3.5%, paired with high-single-digit (or better) dividend growth.

The yield is on the low end of the range, but the incredible dividend growth more than makes up for it.

As great as these dividend metrics are, though, they’re looking at what the company has already done.

But it’s what the company will do that matters.

And so I’ll build out a forward-looking growth trajectory for the business, which will later greatly help when it comes time to estimate the stock’s intrinsic value.

I’ll first show you what the company has done over the last 10 years in terms of top-line and bottom-line growth.

Then I’ll compare that to a near-term professional prognostication for profit growth.

Comparing the proven past with a future forecast in this way should provide illumination on where the business might be going from here.

I usually look for a mid-single-digit top-line growth rate from a mature company. And BlackRock is very mature. They vastly exceeded my expectations here.

A 13% reduction in the outstanding share count helped to drive a lot of this excess bottom-line growth.

We can now see where all of that double-digit dividend growth came from over the last decade. Similar EPS growth propelled it.

In fact, the two growth rates are almost identical, which shows a lot of prudence and intentionality from management.

Looking forward, CFRA is predicting that BlackRock will grow its EPS at a compound annual rate of 13% over the next three years.

This is not far off from what BlackRock has done over the last decade.

CFRA is clearly assuming a continuation of the status quo.

Two complementary aspects of the business separate BlackRock from a lot of other large asset managers out there.

First, they sport healthy net inflows in an industry that has seen the rise of passive ETFs leading to outflows. This is a secular challenge that only a few asset managers have been able to successfully navigate.

CFRA calls this out, saying it’s their view “…that BLK’s top-tier position in passive investments and strong fund performance will attract assets at above industry-average rates over the next few years, despite competitive pressures and secular challenges within the asset management industry.”

Here’s some perspective on that: BlackRock reported $540 billion in net inflows for FY 2021, which is spectacular.

Second, and related to the first point, BlackRock has been able to balance active strategies with ETFs so as to cater to numerous client types and investment styles. They capture capital either way.

With capital flowing toward ETFs, BlackRock still benefits – through their ownership of iShares, they’re the largest ETF provider in the world.

CFRA sums it up nicely: “Despite a more conservative outlook for asset appreciation in 2022, we think BLK’s product mix, technology platforms, and capabilities leave it well-positioned to remain a best-in-class asset manager.”

What this means to me is that BlackRock is situated to continue producing double-digit EPS and dividend growth for the foreseeable future. And you’re stacking that on top of a 2.5% starting yield. Hard to complain about that.

Moving over to the balance sheet, BlackRock has a stellar financial position.

The long-term debt/equity ratio is 0.2, while the interest coverage ratio is at 40.

Profitability is highly robust, which isn’t surprising when you’re talking about the largest asset manager in the world.

Over the last five years, the firm has averaged annual net margin of 32.1% and annual return on equity of 14.3%.

BlackRock has excellent fundamentals across the board.

And the company does have durable competitive advantages that include huge scale, a “sticky” asset base, a diversified product mix, and global brand recognition.

Regulation, litigation, and competition are omnipresent risks in every industry.

I view the business model as somewhat of a risk in and of itself, due to the exposure to global capital markets and the associated volatility.

The company has economic cycle risk. A recession would hurt asset valuations, which would then likely lower AUM, fees, and profits.

The shift from active to passive strategies moves capital away from higher-fee products, although BlackRock’s leadership in ETFs mitigates this risk to a degree by keeping capital in-house.

BlackRock is also staring down the law of large numbers. Their AUM base is so massive in absolute terms that it’s challenging to grow at a high rate in relative percentage terms.

These are important risks to consider, but I think BlackRock’s quality and positioning more than offset them.

And with the stock 20% off of its 52-week high, the valuation has become attractive…

The P/CF ratio of 24.2 is also considerably lower than its own five-year average of 27.7.

And the yield, as noted earlier, is higher than its own recent historical average.

So the stock looks cheap when looking at basic valuation metrics. But how cheap might it be? What would a rational estimate of intrinsic value look like?

That dividend growth rate is at the high end of the scale.

But I think BlackRock deserves it from every angle.

This is lower than the company’s demonstrated long-term dividend growth and EPS growth. And there’s even been a recent acceleration in dividend growth.

The near-term forecast for EPS growth is also quite a bit higher than this number.

I view BlackRock as more likely to greatly exceed this number over the near term. However, I would expect that growth to moderate and average out when looking out decades into the future.

I don’t see my valuation model as aggressive at all, yet the stock still looks materially undervalued.

Morningstar rates BLK as a 4-star stock, with a fair value estimate of $1,000.

We have a very tight consensus this time around. Averaging the three numbers out gives us a final valuation of $1,021.36, which would indicate the stock is possibly 30% undervalued.

Bottom line: BlackRock, Inc. (BLK) is a high-quality company in every fundamental way that matters. They’re set to capture and profit from the collective sum of the world’s growing economic output. With a market-beating yield, double-digit dividend growth, a moderate payout ratio, 13 consecutive years of dividend increases, and the potential that shares are 30% undervalued, this could be one of the best long-term opportunities in the market for dividend growth investors.