I’m a long-term dividend growth investor. And when I say “long term”, I mean it. Whenever I invest in a business, I intend to remain a shareholder for the rest of my life.

However, every once in a while, I have to sell a stock and get out of an investment. But when I do commit the rare action of selling a stock, I’m looking to reinvest that capital immediately.

Well, very recently, I sold out of a longtime holding in my portfolio. And I reallocated that capital into a similar business that better suits my needs.

The business I invested in is consistently putting up impressive numbers across the board. And they’re paying out a safe, growing dividend – which is music to my ears.

The investment I sold out of? It’s Walt Disney (DIS).

Well, it’s actually quite simple. Disney decided to indefinitely suspend their dividend back in May 2020 when the pandemic first really kicked in. And, you know, as much as I think a company should treat their dividend as sacrosanct, I don’t blame the company for doing that. With many of their businesses, most notably their theme parks, being directly affected by shutdowns, Disney had to err on the side of caution and conserve cash in order to ensure the survival of the company.

When a dividend is suspended, that’s usually a sell signal for me.

However, in this case, I didn’t immediately sell Disney. There are two reasons for that. First, the stock price was severely depressed. Disney’s shares were trading hands for around $110/each back in May 2020, when the dividend news came out. And I just thought that was very unfavorable in terms of pricing and valuation.

Second, Disney is a world-class enterprise. They’re a long-term winner. And I don’t like selling winners. Because of my affinity for Disney, I gave them a very, very long leash. A much longer leash than almost any other business would get from me. But as 2020 rolled into 2021, and there was still no dividend, even a long leash has a limit. 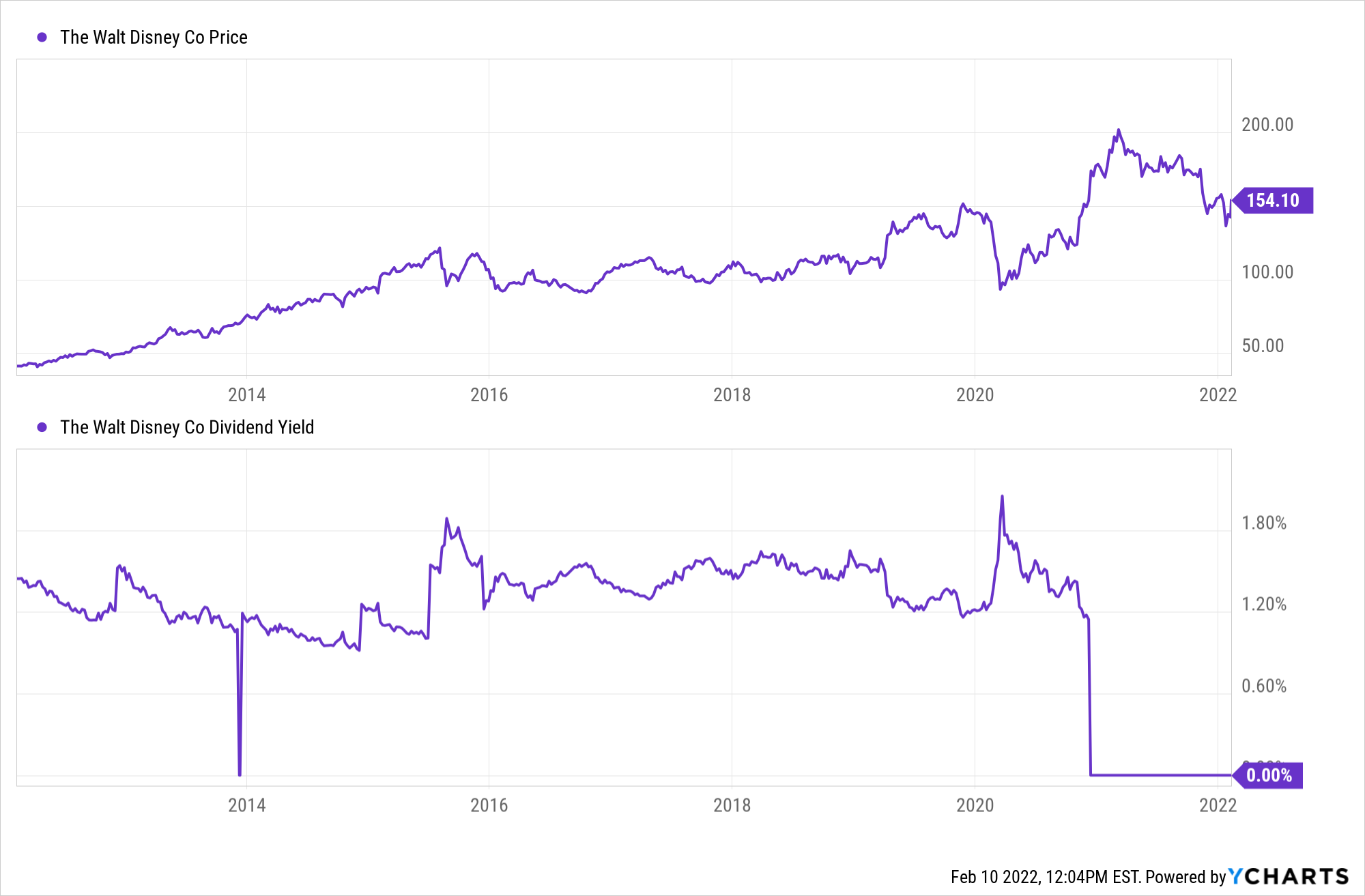 I sold more than half of my position in Disney in August 2021, when the stock was priced at $178.

And my Patrons over at Patreon got that trade alert in real-time. Look, I couldn’t rationalize keeping the entire position intact any longer, partly because it was a rather large position in the portfolio. And it wasn’t productive at all in terms of income. So I had to change that dynamic. However, I also didn’t want to completely sell out. It’s such a fantastic business. And there was hope that the company might decide to reinstate the dividend in 2022.

Well, that hope appears to be gone.

CEO Bob Chapek made the following comments in late 2021 about the potential near-term reinstatement of the dividend: “I think what we’re going to do is, number one, our clear priority, and the Board agrees with management, that the clear priority is funding our new growth businesses that we’ve got. But once we get to a point where, again, our cash flow is funding that, handling some of the debt that we’ve got, then everyone agrees that it would be a great thing to reinstate that dividend and do share buybacks. But that’s sort of in the distant future…” That quote from Chapek sealed the position’s fate. 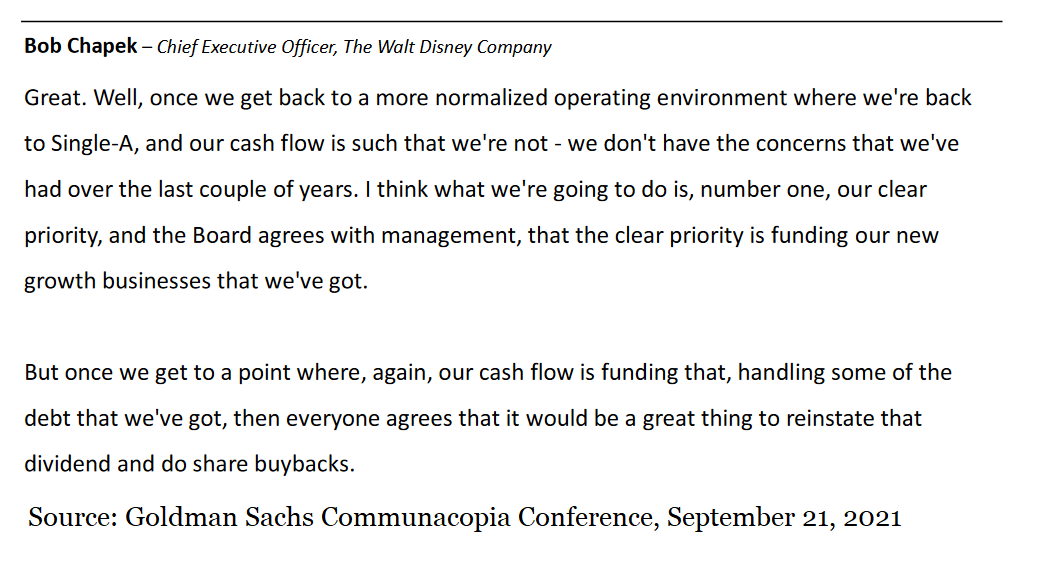 I then sold out of the rest of my position on January 20 for slightly under $152/share.

Everyone over at Patreon also got this alert. Now, Disney’s stock started a downward slide the very next day after I sold, but that was pure luck in terms of the timing. That’s not important, though.

What is important is what I did with much of the capital from the sale of those Disney shares.

Before I get into the new investment, I just want to say that, whenever I do sell out of a position, I try my best to reallocate capital laterally. And what I mean by that is, I try to reinvest the money into another business that’s very similar. This allows the portfolio to maintain its prior composition.

I reinvested most of the capital from the sale of those Disney shares into a competing business that, in many ways, is doing even better than Disney.

That’s right. I initiated a new position in Comcast (CMCSA) – on January 20 for $50.79 per share. And the Patrons got that alert, of course.

I’m very excited about this new investment and what I believe it’ll do for the FIRE Fund over the coming years. Comcast operates a lot like Disney, in the sense that they’re a global entertainment and media conglomerate with a major US broadcast network, the theme parks, and a major film studio. Both companies produce a lot of content. Both companies are building out streaming platforms, – Disney’s Disney+ and Comcast’s Peacock, respectively.

But Comcast differs in their diversification.

Through the cable side of the business, they provide cable video and cable broadband internet connections. So Comcast isn’t just involved in content along with Disney. They also own the pipes across which that content gets distributed. This additional diversification via exposure to broadband, which is a growing megatrend, has helped them to weather the pandemic storm a lot better than Disney.

Disney’s revenue and EPS right now are down compared to where they were in 2019. Their share count is way up, as is the debt load. Comcast, on the other hand, is sporting higher revenue and EPS than it did in 2019. The share count and debt load are not way up. These two businesses have gone in opposite directions in terms of operational results over the last couple of years. 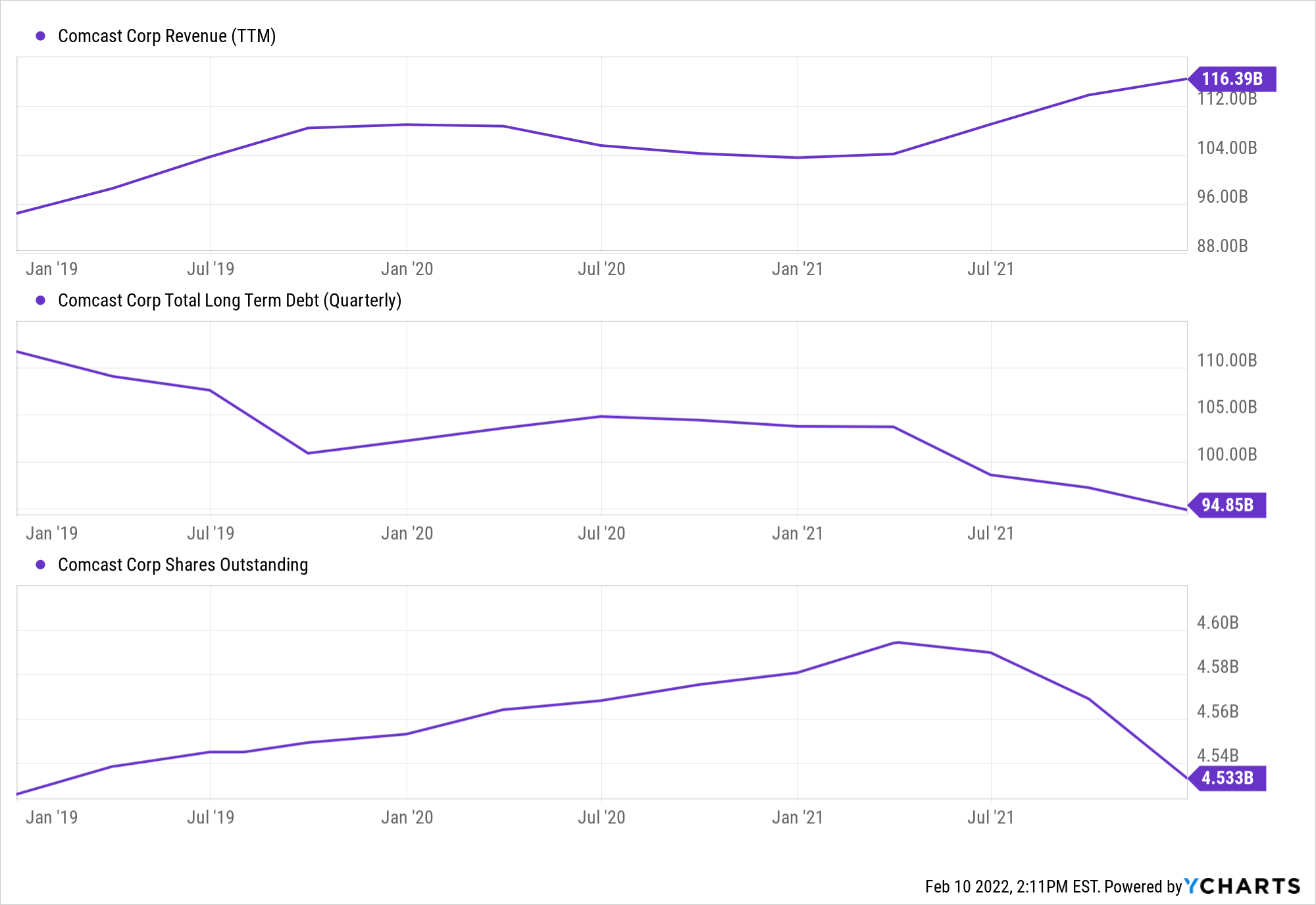 And that big difference in operational results shows up in the dividend.

They increased it by 8.7% in 2021. And they increased it by 8% in 2022, just days after I initiated my position, which is precisely in line with the expectation I laid out in my recent full analysis and valuation video on Comcast. If you watch that video, you’ll see that Comcast has impressively produced high-single-digit revenue growth, double-digit EPS growth, and double-digit dividend growth over the last decade.

In that video, you’ll see that I valued shares at $58/each.

So I see the stock, at around $50, as significantly undervalued. Keep in mind, that valuation was partially based on a DDM analysis using an 8% long-term dividend growth rate. Since Comcast just increased the dividend by that exact amount, the model holds up. And the valuation comes after a thorough analysis that went through the fundamentals, competitive advantages, and risks of the business. So make sure to check that video out for a full look at the business and an estimate of intrinsic value.

I have to be honest. I hated selling out of Disney.

In my view, Disney is one of the best businesses in the world. They have one of the most recognized and well-regarded brands on the planet. It was great to own a slice of that. And I don’t believe in selling out of winners. As the all-time great investor Peter Lynch famously said, “Selling your winners and holding your losers is like cutting the flowers and watering the weeds.” Count me in as someone who’d rather have a garden of flowers than a bed of weeds. But – and this is a big but – there’s a caveat here.

In my opinion, Comcast is also a long-term winner.

In many ways, it’s even more of a winner than the vaunted Disney. And I say that with all due respect. If their diverging operational and dividend paths over the last two years doesn’t clue you in, this might. Disney’s stock has compounded at an annual rate of 14.6% over the last decade. 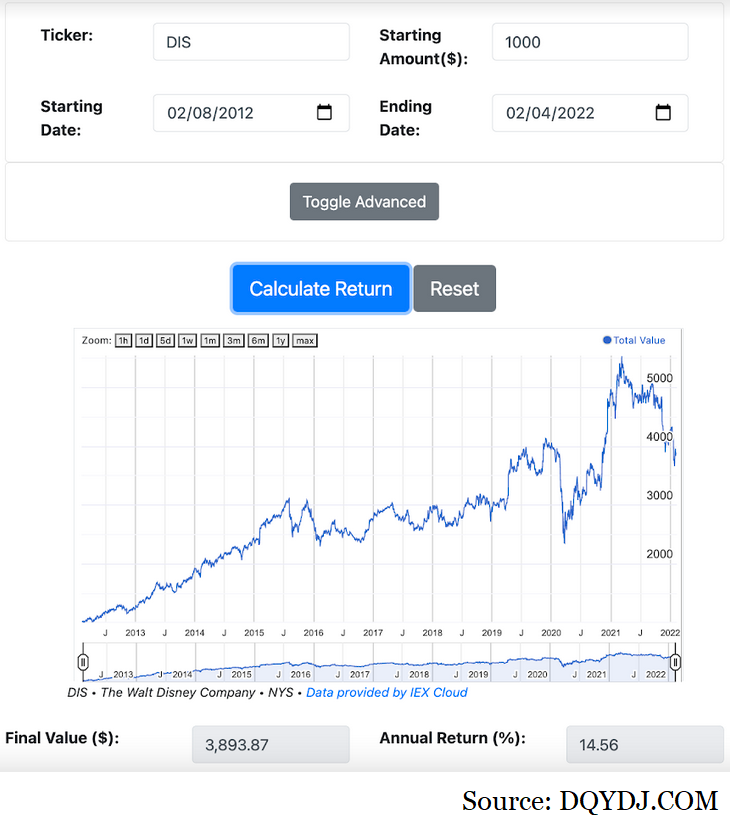 That’s great. Like I said, Disney is a fantastic business. It’s a winner. However, Comcast’s stock has compounded at an annual rate of 17% over the last decade. That’s phenomenal. 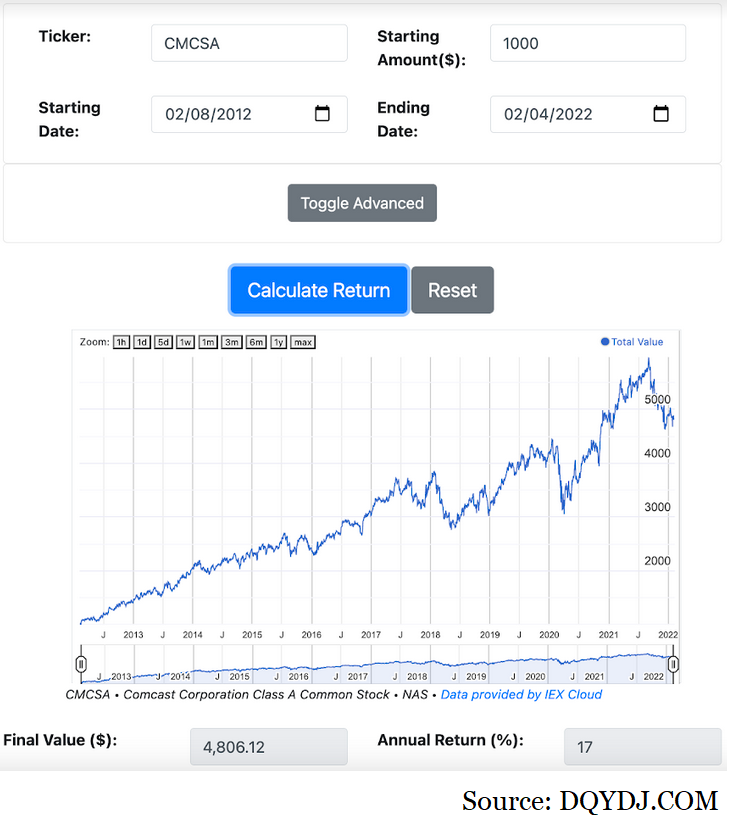 Not to take away anything from Disney, but Comcast just better suits my investment needs.

I’m a long-term dividend growth investor. I see high-quality dividend growth stocks as the golden geese that lay ever-more golden eggs. My bills have to get paid, but I don’t sell stocks to pay bills. Instead, I live off of that growing pile of golden dividend eggs.

And so if a golden goose isn’t able to lay ever-more golden eggs for whatever reasons, I have to exchange it for a healthier golden goose still able to pump out an ever-larger sum of golden dividend eggs in order to make sure my passive dividend income continues to flow and grow and the bills get paid.