We’re entering a period where markets are increasingly divorced from fundamentals. So we find ourselves reviewing everything we know about behavioral finance – the study of the emotional and systemic mistakes that investors have made for centuries.

As humans, we don’t predict well… And that’s largely because the future is not predictable.

We live in a complex, interconnected world in which no one can truly understand what may happen next.

That’s why today, I’ll cover a better way to account for the future in your investment portfolio… instead of relying on “predictions.” And I’ll share one signal that’s shaping our outlook from here.

Looking back at recent major stories in the market, any truthful assessment will admit that they were simply unpredictable…

No one predicted the COVID-19 pandemic specifically. It arose out of nowhere. In fact, we haven’t even fully determined its origin in retrospect. And seemingly as unpredictable was the amazing rally that followed.

Other market drivers aren’t the same sort of natural “black swans” as COVID-19. Rather, they hinge on a single decision by a small group that could go either way…

Take the collapse in Chinese stocks over the past few years, for example. Beijing decided it needed to crack down on the power of its wealthy tech firms. Officials started blocking initial public offerings and pressuring CEOs.

You couldn’t have predicted the pandemic or China’s anti-capitalist turn. But a studious assessment of the risks could have led you to expect that things like this may happen… even if you didn’t know precisely when or how.

If you follow history, you know that pandemics happen and will likely happen again. If you follow the Chinese government, you know it can make forceful moves that don’t respect property the way we do here in the U.S.

But again, those are assessments of risks, not predictions. You know that equity prices have exposure to broad and unpredictable events, so you make sure not to leverage up. And you understand a 50% drawdown may happen.

You know Chinese stocks sometimes face an unfriendly government, so you keep your allocation reasonable or demand a cheaper valuation on stocks that you buy.

That’s why in Stansberry Portfolio Solutions, the rest of the investment committee and I turn to risk assessment – not prediction – to decide what a fully allocated, bulletproof portfolio should look like.

In short, we seek to understand all the possibilities of what may happen and to find the potential for returns without taking on undue risk.

As investors, we prefer to understand businesses well and determine which ones we’d like to own for the long term. It’s a lot easier than playing the macroeconomic game. If you can get in for a reasonable price and hold for a reasonable amount of time, you can build true wealth.

And you do need a baseline view of the future. A simple outlook on whether you expect the economy to grow and whether valuations can climb will serve you better than a complex forecast… If nothing else, it will keep you from becoming overconfident.

With that in mind, we do have one indicator shaping our view today…

We’re optimistic about the stock market. But we do see one rumble under the surface that tells us to be cautious about bonds: the yield curve.

The yield curve measures the difference in interest rates on short-term and long-term bonds.

When it’s “inverted” – meaning short-term bonds fetch higher interest rates than long-term bonds – it’s a powerful indicator of an upcoming recession, and it makes headlines across the financial media.

But the rest of the time, only bond markets watch the yield curve, even though it can still tell you a great deal.

Today, the yield curve is flattening… And that’s not a good sign.

If you plot the interest rate for each maturing bond in a line, the curve is typically steep. Normally, a bond investor will require a higher yield on, say, a 10-year bond than a two-year bond to account for the lockup of capital and the greater uncertainty further into the future.

That was the case in early 2021. But now, the curve is flattening. You can see in the following chart that the curve last March was steeper than it is today… 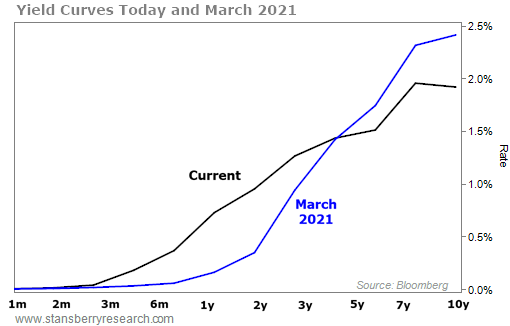 Or you can look at it a different way… By focusing on the difference between the two-year rate and the 10-year rate, you see the yield curve has recently dropped very quickly.

The top of the chart below shows that difference as a ratio. Overall, the yield curve isn’t inverted… but it’s flattening. Take a look… 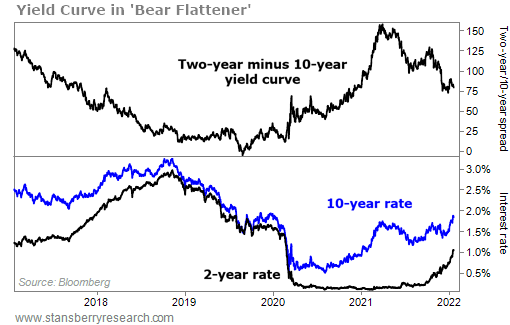 The bottom half of the chart plots the interest rates separately. This allows us to see that the yield curve has flattened, but only because of a rise in the short-term rates (and not because of a fall in long-term rates).

This is called a “bear flattener.” It suggests that inflation will take hold… hence the lack of attention to longer-term bonds. And it suggests the Federal Reserve will hike rates, leading to higher short-term rates.

Neither of those outcomes is good for bondholders.

However, according to research from investment-management company Merrill Lynch that covered 1976 to 2018, it’s a good environment for stocks… 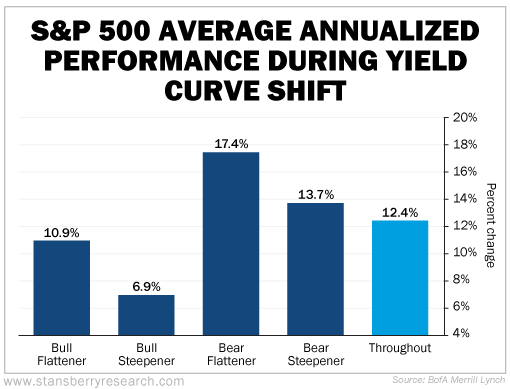 During bear flatteners, the market has tended to return 17.4% per year, compared with 12.4% over the course of the period studied. This tells us that we should continue to see the scenario where stocks rise because there’s no other place to go.

That’s a simple baseline view of the future – and it’s worth a lot more than any specific prediction about the market’s next move. We can expect a strong economy… but also understand that valuations are high.

The key here is to understand that you don’t need to predict how the market will act. You just need to avoid mistakes and bet on different outlooks in the right combination.