Inflation is hitting everything.

Our wallets. Our bank accounts. And even our stomachs.

I’m sure you’ve seen it. Empty grocery store shelves juxtaposed with rising grocery bills. The tab at your favorite take-out spot or a famous restaurant forcing a double-take…

Prices of almost everything we eat and drink have risen and will continue to rise – but not always for the reasons you think. Some food inflation is being exasperated by food giants looking to turn a profit.

So, in today’s Total Wealth, I’m exploring why this frightening trend is embedded in our future and how exactly you can counter this affront with three new food-stock plays.

The Consumer Price Index (CPI) Summary released just last week shows the “food at home” index rising 6.5% over the past 12 months. To put that into perspective, that index rose, on average, 1.5% every year for the last decade. A 6.5% jump is unprecedented.

But that’s just the overall change. If we look at the numbers for meat and eggs things get more absurd. Proteins cost 12% more by December’s end than they did at the start of 2021. It’s normal for the price of meat to ebb and flow. In an average year, it rises around 3% per year in this category – which you can see in the chart below. A steady increase with dips here and there… 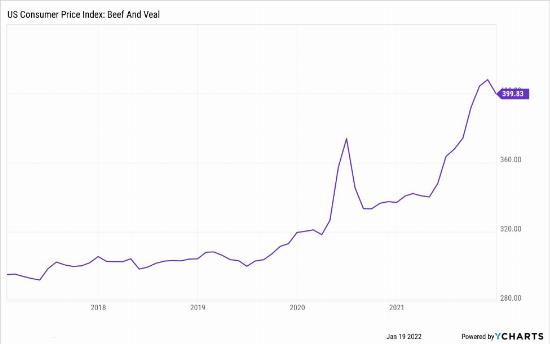 But we can also see just how extreme food inflation for in-demand protein has been since the pandemic started two years ago.

And, when it comes to inflation, the devil is in the details. If you look even closer at specific foods, you’ll see just how much more consumers paid last year. 13% more for ground beef. 22% more for beef roasts. The price of bacon was up more than 18% and eggs, a fridge staple, increased 11%.

The American Bakers Association, which tracks prices of core inputs, including sweeteners and cocoa, reported price hikes in 49 of the top 50 ingredients used in baking.

According to research firm IRI, food prices are estimated to rise another 5% in the next six months, though the level of increases will vary by grocers and regions. But by the end of 2022, the range is wide. Analysts and grocery executives expect price increases ranging from as low as 2% to as high as 20%.

And this isn’t just a domestic issue. It’s the whole planet’s problem.

Global food prices shot up 30% on average in 2021 – led in part by so-called essentials, including vegetable oils, which rose a stunning 68%.

2022 isn’t looking any better. One example is Canada’s Food Price Report, just released last Thursday. It predicts the average Canadian family of four will pay an extra $966 for food in 2022, for a total annual grocery bill of $14,767, a seven percent increase compared with 2021.

All of which means there are no quick fixes.

Expect Inflation Get Inflated Prices – And Ways to Score

This inflation, especially as the financial media (and elsewhere) have spun the tail, feels inevitable and inescapable – which big companies will use to their advantage. As the public increasingly becomes aware of rising input costs, rising packaging and shipping costs, supply-chain issues, and weather-related shortages, they’re more likely to accept higher prices at grocers and restaurants.

That frees up companies to raise prices faster and higher than they need to – grabbing higher profits as they go.

Mondelez International Inc. just announced it was raising prices across cookies, candy, and other products sold in the U.S. by 6% or 7% starting this month. General Mills Inc. and Campbell Soup Co. joined in.

Companies like these are massive and have less competition and more leeway to raise prices and improve their profit margins.

In fact, only a few food giants control the majority market share of almost 80% of dozens of grocery items.

A Guardian and Food and Water Watch investigation into 61 popular grocery items found, “for 85% of the groceries analyzed, four firms or fewer controlled more than 40% of market share.”

The joint investigation was based on market share data from thousands of supermarkets across the US.

The report found four firms, sometimes fewer, controlled at least 50% of the market for 79% of the groceries monitored.

For shoppers, differences in packaging and branding give the illusion of choice. But most of our favorite brands are actually owned by a handful of food giants, including Kraft Heinz, General Mills, Conagra, Unilever, and Delmonte.

With a handful of companies dominating food production and sales in the U.S. and globally and readily raising prices because they can, it makes sense to own stock in those companies.

Mondelez International Inc (Nasdaq: MDLZ) is on a tear and just made a new all-time high. It’s got a lot higher top go as long as food prices continue higher.

General Mills Inc (NYSE: GIS) is another U.S. and global food company whose stock has just made another new high. And it has plenty of room to make more new highs as long as they can keep increasing their profit margins as they raise prices on their food products.

And finally, there’s The Kraft Heinz Company (Nasdaq: KHC), though weighed down with a big debt load, its stock looks to be consolidating around $37, way below its 52-week high of $97 and change, and could be the big winner in this trifecta. Though KHC’s profit margin is a little more than half what Mondelez’s is, KHC’s 4.27% dividend yield more than makes up for its currently lagging profit margin.

All three stocks will help fill your wallet even though food prices are hitting you in the gut.