The Walt Disney Company (DIS) is a beloved company many investors have known of since their childhoods, after being introduced to characters such as Cinderella, Mickey Mouse, and Peter Pan. Most of these characters are featured in the company’s theme parks, which have become family destinations for many generations.

Disney’s founders, Walt Disney and his brother, Roy, started the company nearly a hundred years ago under the Disney Brothers Cartoon Studio name in Hollywood, California. Over the decades since, DIS has produced a long list of live-action and animated films from its studios, which now also include the Pixar, Marvel, and Lucasfilm brands.

Q4 earnings of $0.37 per share were well below estimates for a profit of $0.49 per share. Revenue of $18.53 billion also fell shy of forecasts of $18.78 billion. On the bright side, the company ended fiscal year 2021 with 179 million total subscriptions across its DTC streaming portfolio, with 60% subscriber growth year-over-year for Disney+.

Going forward, Wall Street expects DIS to earn $3.83 per share for 2022 on revenue north of $74 billion. Earnings are expected to grow even further in 2023 to $5.02 per share as theme parks—which represented over 30% of revenues—and movie theaters remove capacity restrictions. From a technical standpoint, the two-year chart below shows shares are oversold with the relative strength index (RSI) below 30.

However, oversold conditions were south of 20 in March of 2020, so there could be additional weakness ahead before a bottom forms. The most likely area seems to be at $135 and the rolling 200-day moving average. This level also represents the gap higher from the November 2020 breakout. 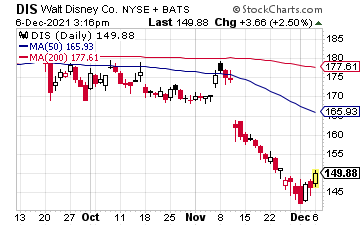 While it is tempting to start initiating positions at current levels, savvy investors may want to sell put options to get a better price while collecting a sweet premium.

This would commit an investor to buying shares on continued weakness while using the premium to offset the cost basis even further.

For instance, the DIS January 140 puts are currently trading for $4.

If shares fall below this level by January 21, 2022, the option would be exercised, and you would be required to buy the stock at $140. However, the $4 in premium would lower your cost basis to $136.

There is risk, though, as you would be obligated to buy shares at $140 even if they are at a more discounted price, or below $136, by January 21. If shares happen to stay above $140 by expiration, the put options would expire worthless and you would keep the whole premium.

This type of options trading strategy should only be done with stocks you want to own, and even then, only after doing your homework. You must also be approved to sell a “naked option,” as it requires the capital to cover the stock purchase if the option is exercised by the seller.